THE WEEKENDER :) A CALIFORNIA STATE OF MIND 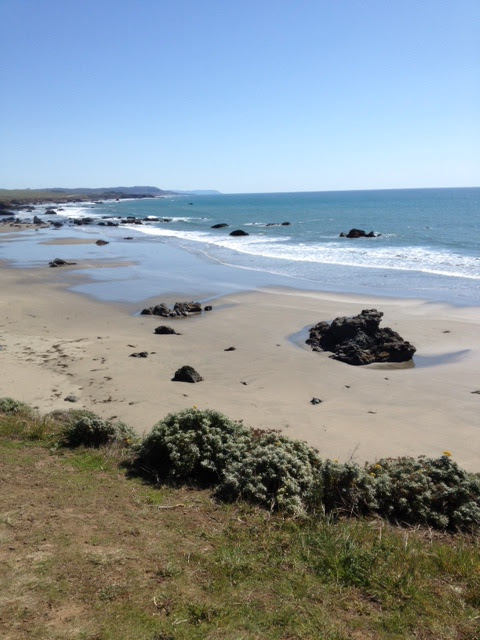 MAKING THE CASE-A COLLECTION OF SCENES
A coffee patio-mid morning.  An 80+ man is saying he
thinks marijuana should be legalized, not that he wants to smoke it, but he would use food based pot to ease back pain.
"Oh yea, I agree," says another octogenarian. "It would help with prison overcrowding and save the state a lot of money."
A lunch table conversation.  "The karaoke was so bad last night it wasn't even laughable.  Usually it is a hoot."
A television newscast.  "Here you see the sheriff rehearsing his Elvis moves.  He's one of the stars of the annual Phyllis Madonna fashion show."
Earlier in that newscast. "It's just going to be an awesome weekend.  Temperature in the mid 70's and nothing but blue sky. Awesome.  Get outside and enjoy it."
Columnist John Brannon in THE CAMBRIAN-"...it was a convention of clouds, of light, the sea and a crescent moon hanging low in the western sky."
Oh, I could go on, but the point is not to gloat, rather to find that link between well being, nature and being here.
When we saw this play on TV, it provoked a sense of pride
and a chuckle.
Betty White is a great case in point. People here stay active, longer and that is good for you. I know that we are more active than we were in the mid-west, because it is easier. Weather makes a big difference. (By the way a couple of those scenes were shot just miles from where I sit.)
And I have noticed people are more playful-that too is good for you.  What's the point of being a grump, as though
carrying the weight of the world on yours shoulders
will A) help you or B) make it any better?
Last year San Luis Obispo, our county seat, was
named the happiest city in the US. It is true.  People here are friendly, happy and playful. Case(s) in point-The Friday Lunch Flash Mob. Today Jeannie brought toys. 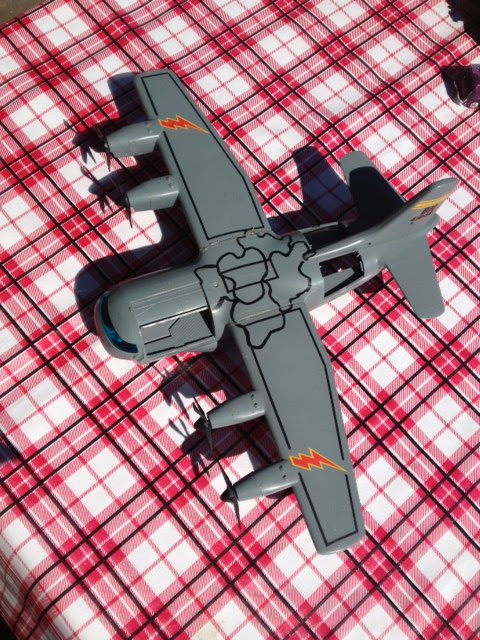 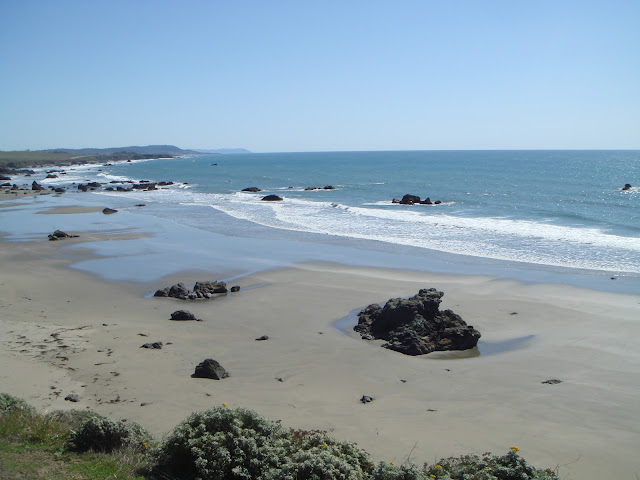 BTW-I'm comparing camera quality.  This was shot with my digital.  The
scene above, similar to this, was shot with an iPhone.  Do you detect differences in quality? 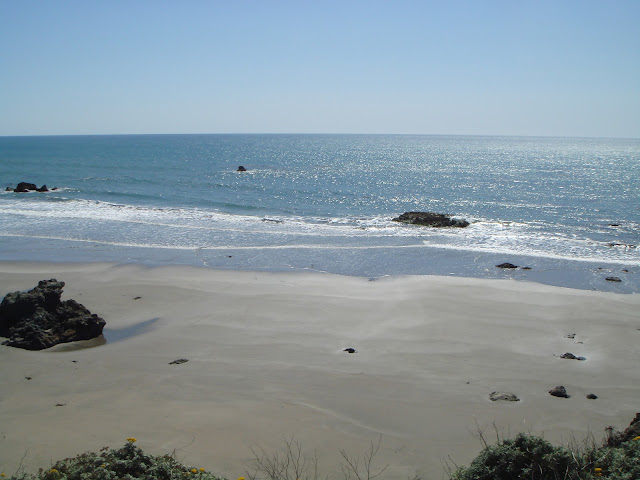 Not only beautiful, but good for you as well. 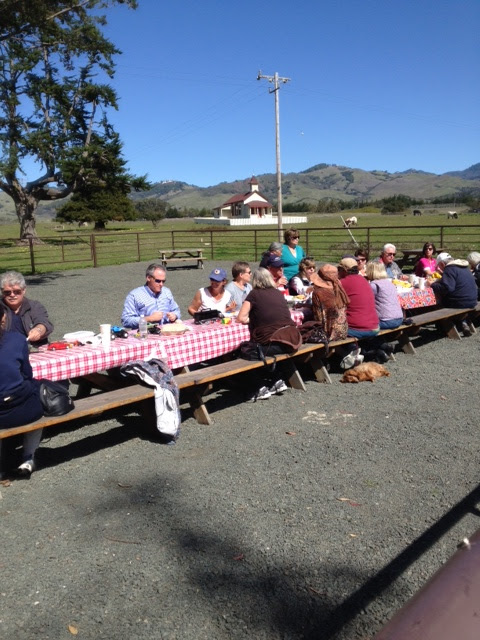 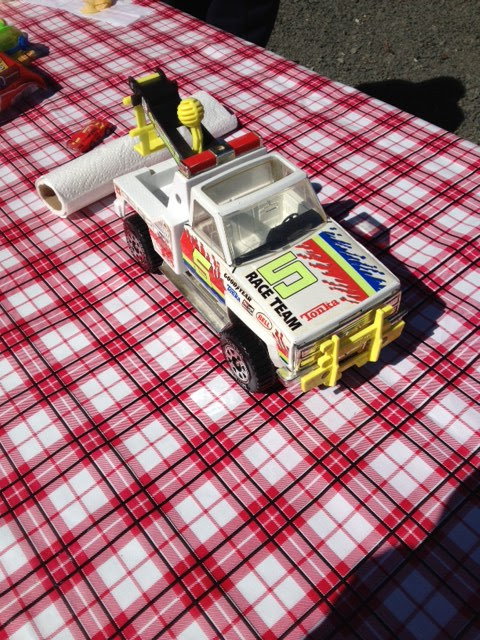 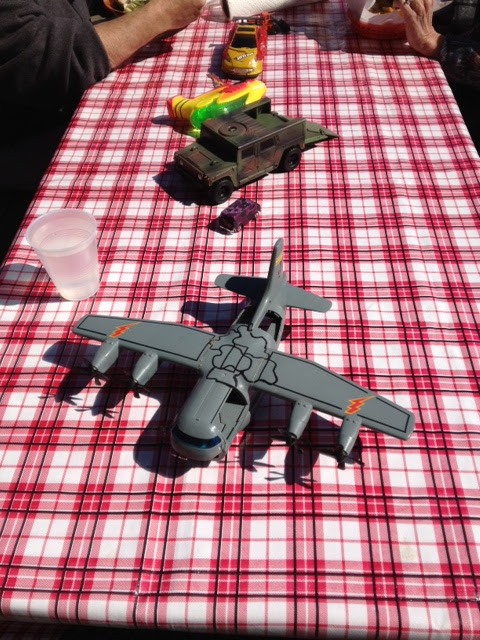 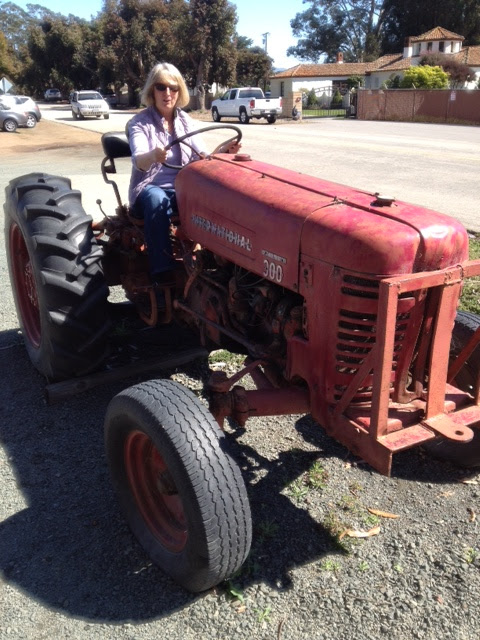 I used to laugh at all those California jokes.
Maybe now, I am one, but this place is truly a state of mind.
It's got to be the sunshine. And maybe the molecular impact of the Pacific and all that fresh air. And maybe becasue out here almost anything goes-- it's cool.  No, it's more than that. As they say "it's all good!"
Here's to a little California in your weekend.
See you down the trail.
Posted by Tom Cochrun at 2:31 PM