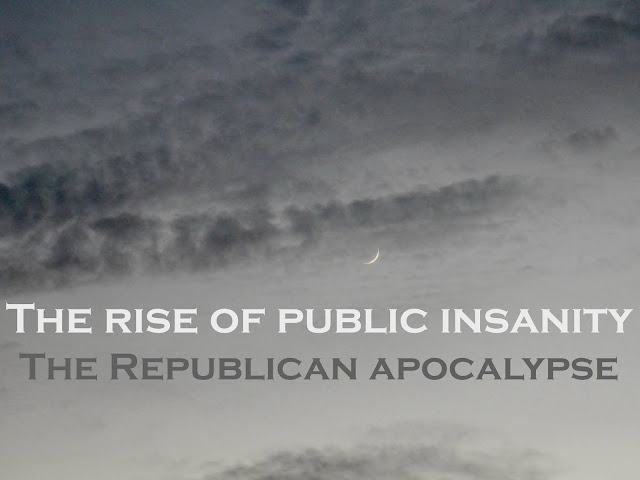 The scenes are hauntingly reminiscent, shutter flashes of a pre-millennium sci-fi or political thriller, too absurd to believe. But here we are, witnesses to a dystopian undoing of our own world view and all that we have believed about democracy and the American way.

Truth is set aside. Delusion becomes contagion. They would rather die than take a vaccine. They've become a Reich, wrecking a Republic. A tidal rise of insanity, a time of vultures.

The newest revelations of "madness-Trump" do more than confirm, they scare the hell out of us.
Joint Chiefs, the Speaker of the House, national security executives, former leaders all in furtive calls and liaisons desperately trying to avoid a nuclear launch, a rogue war, and the use of federal troops on American citizens. Never before has an American president talked of staging a coup!
Even with all of that, the Republican party is interested only in restricting who can vote, and changing laws to give them control over the count.
They seek to do what the 1/6 insurrection could not,  divert the course, change the outcome, of public elections. 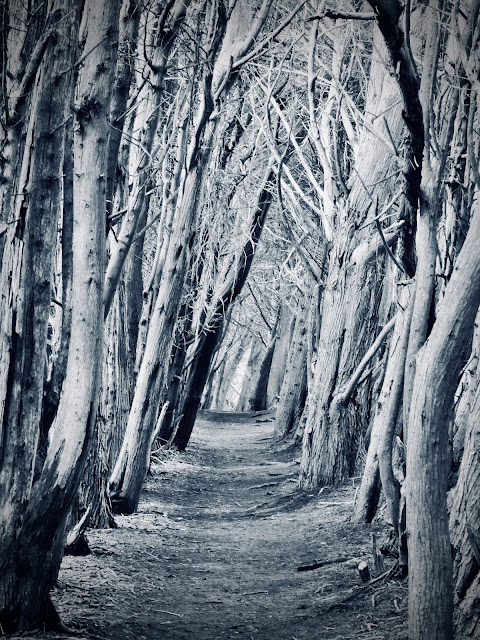 It is time to ignore Trump. The Cleveland Plain Dealer has begun to ignore politician's false statements and stunts. All media should do likewise.
I am a first amendment absolutist and as reporter was equally absolute about the public's right to know. I oppose any form of censorship, or restriction of media access. Media has no obligation to quote Trump or even give attention to his absurd lies about the election. There is no news in his mental illness.
Printing or broadcasting his lies does no one but Trump any good. Giving him time and attention is a destructive drumbeat that is a call to damage or destroy the nation.
History speaks to us. Even the Chairman of the Joint Chiefs has joined historians and those who see in Trump and Republican leadership similarities with the Nazi fascists of pre World War II. It's chilling to consider how the German nation was propagandized by lies into following a liar and madman. Donald Trump is observably delusional. Those who follow him and who do his bidding are a public insanity that should frighten us to our bones. 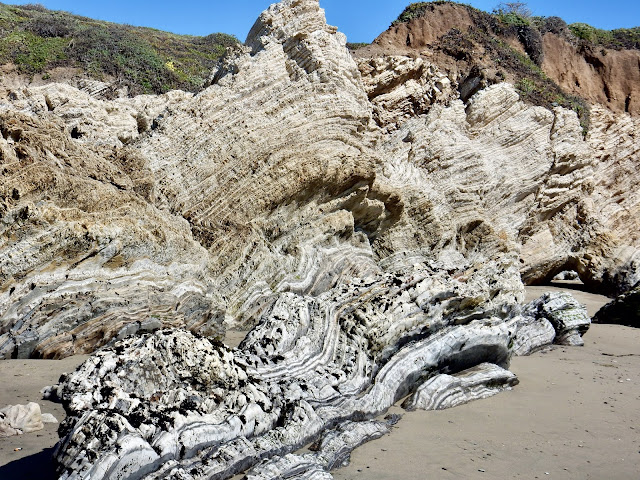 Despite the monuments that would memorialize democracy, its foundation is not bed rock granite. Democracy is no stronger than its participants are wise.
Stupidity, that is a lack of knowledge, ignorance of history and fact has been rampant. Now, zombie like, mass public insanity rises from the septic mass who elect Q dupes, those who refuse to see the domestic terrorism of Trump, or who cynically swindle public trust and trample the truth as does Mcarthy, McConnell and thousands of Republican office holders. "Good Republicans" are being strangled by evil. 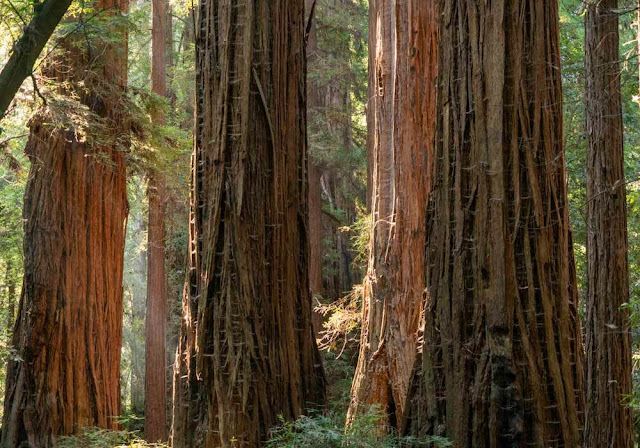 We are deep into it now. I don't know that historians can find a time so replete with mass lunacy and political imbecility.
A war has begun. The Republican party is wholly unfit, anti American and seeks to destroy democracy. They are in league with domestic terrorists.
Democrats would do us all a favor if they went on the offensive. So too should people of conscience.
"Silence in the face of evil is itself evil. God will not hold us guiltless. Not to speak is to speak. Not to act is to act."
Dietrich Bonhoeffer
Bonhoeffer was a German theologian and pastor who was executed for his role in attempts to assassinate Adolph Hitler.
He had said if he sat next to a madman as he drove a car into a group of innocent bystanders he could not, even as a man of faith, simply wait for the catastrophe. He said he must try to wrestle the steering wheel out of the hands of the driver.
Not to act, is to act.
See you down the trail.
Posted by Tom Cochrun at 9:12 PM 5 comments:

An American Lamentation and A Toast! 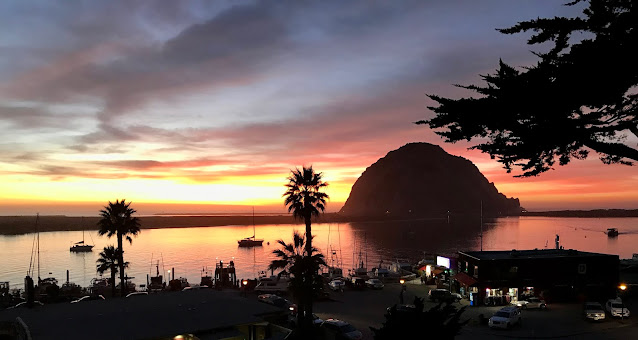 (California Central Coast) Here's a view from the western edge of this old democratic republic as it rounds 245 years.
Demanding and challenging times are ahead.

After the exile of the pandemic we arrive at this anniversary of our noble and declared aspirations only to be confronted by who we have become, or a recognition of who we have always been. Proportion and public acceptance has changed.

In the light of freedom from monkhood and the glow of returning to friends and work and life in a nation under a steady hand, we see the enemy amongst us.

It is telling the vaccinated can live with assurance, but 30% of the nation will continue to die and suffer because they remain unvaccinated.

Two and half centuries of commitment to life, liberty and the pursuit of happiness, following our revolution against despotism, finds us divided and challenged by a fifth column that no longer hides.

We have become more divided and more ignorant. 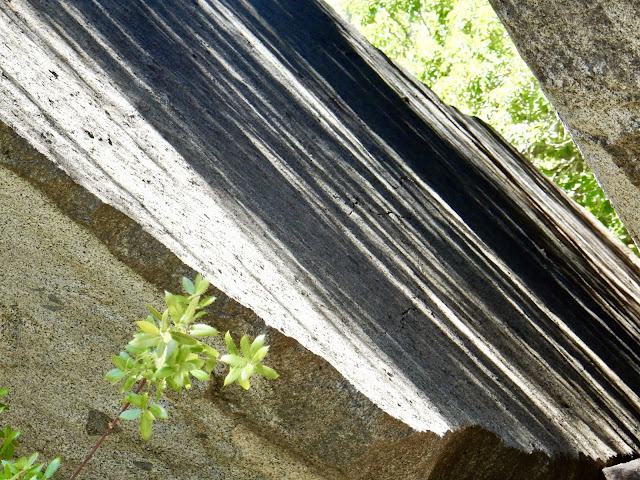 A bastion of the nation has been split from our constitutional bedrock. The Republican party, has turned against America, rejecting democracy and republic to become agents of autocracy and authoritarianism.

Gaining power is the sole principle of Republicans and they employ lies, insurrection, voter suppression and the abandonment of oaths.

We can thank the "Natures God" affirmed in the Declaration, and sworn to in oaths of office, there are more Americans committed to democracy. The majority has the capacity to limit the rise of the aggressive fascist, but "they" have become adept at minority "rule." 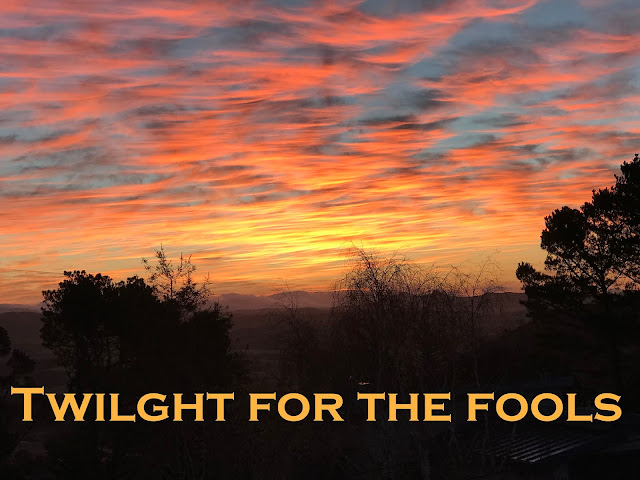 They are under attack.
A select House Committee, despite Republican opposition, will draw blood on the insurrection investigation.
Biden's mastery of foreign policy and his decades of Senate law making, though challenged, are serving him and the nation well. He has bi-partisan support among the electorate. His performance with NATO and especially with Putin boosted his standing and served national interests while exposing what a fraud the previous administration amateur hour had been.
House and Senate Republicans represent a minority of American voters, but Congressional apportionment and Senate representation give the minority a big stick. That makes the mid-terms crucial. Recruiting and funding good House and State Legislative candidates is a Democrat must, as is another successful massive vote turn out.
Trump legal issues will mount. There is likely more coming.
The Department of Justice is gearing up to enforce election law, even as a rightist Supreme Court attacks the voting rights act.
The Biden and Democrat plan for gun control and funding of police, co-opts and shuts up Republican carping about crime.
Democrats have given Republicans the gallows and the noose on voting rights. They may not carry the legislation because of racist and fascist Republicans including Mitch McConnell and his use of blocking tactics, but Democrats and former real Republicans are betting the majority of American voters favor extending voting rights. Polls validate the belief the fascist Republicans are likely to pay at the ballot box. Despite efforts to making voting more difficult, voting activists say the way is still clear for a large turn out.
Expect to see our US Capitol begin to resemble a "green zone," a reflection of the troubled times. It's easy to say this national split can be blamed on the rise of Trump, and he certainly contributed by pandering to our worst strain. But the truth at this passage of another year of "independence" is that it has been ever such.
Nativisim, nationalism, racism, retrograde simple minded ignorance, demagoguery, and the damage they do have been with us from the beginning. Every inch of progress, every law expanding liberty, guaranteeing human dignity and rights has been a battle.
Picket lines, demonstrations, voter drives, confrontations, jail, street fights, political deal making, compromises, and pragmatism have been behind every advance toward our noble declarations and aspirations. Some of us are older, hoping it would not require such hard work, but the truth is independence is a fight, a democratic republic is a struggle. The fight is revolutionary against the totality of deception, manipulation, the power of wealth, the politics of favor and greed. 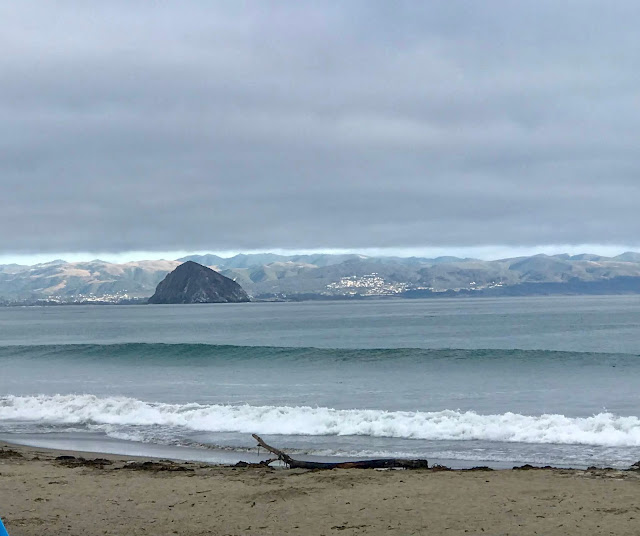 The nation has endured dark clouds repeatedly, finding a way to preserve and even repair and improve the union. It may be necessary for the power of the federal government to be brought against those who seek to destroy the republic, even public officials who seek to countermand what has prevailed since 1776, though war, rebellion, assassination, disaster, struggle for equality, and time. 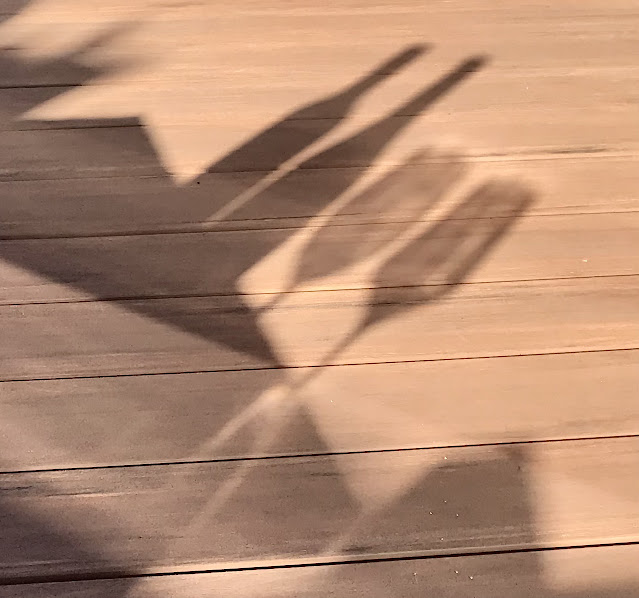 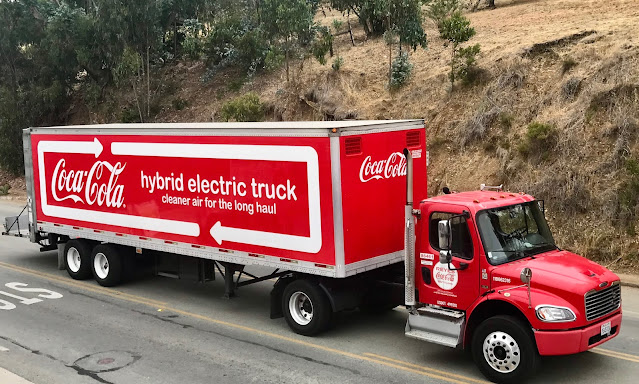 I was surprised to see a hybrid electric truck, especially one wearing a famed American logo, on Cambria's main street. Progress? 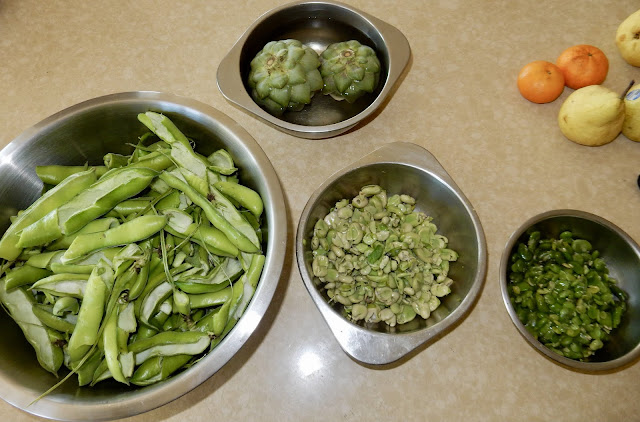 Here's another piece of Americana-summer gardening.

You've read here before of our love of fava beans and Lana's considerable labor with them. Case in point..the bowl on the left are the pods, the middle bowl, the inner husk or shell* and on the far right, the bean.  The artichokes are from one of our raised beds and another early summer crop.

*It's a matter of test about getting rid of the inner husk. I think they add a little flavor. Lana prefers them gone. Here's a secret, I used them, still in the husk, in a recent dish, and she didn't notice, or at least object! 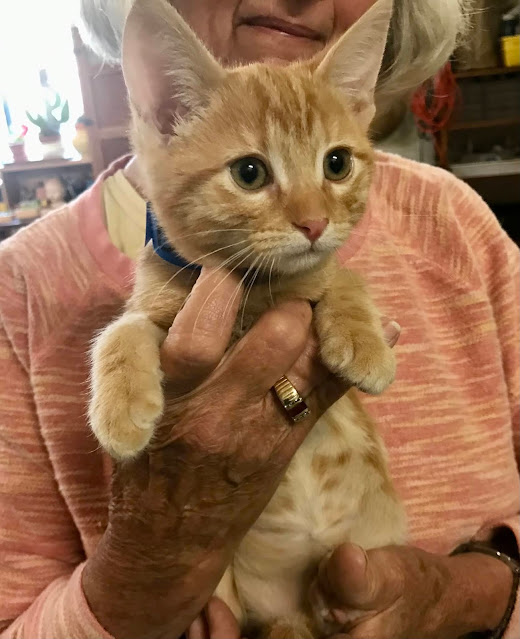 We welcome a new member to the blog staff here at world headquarters. 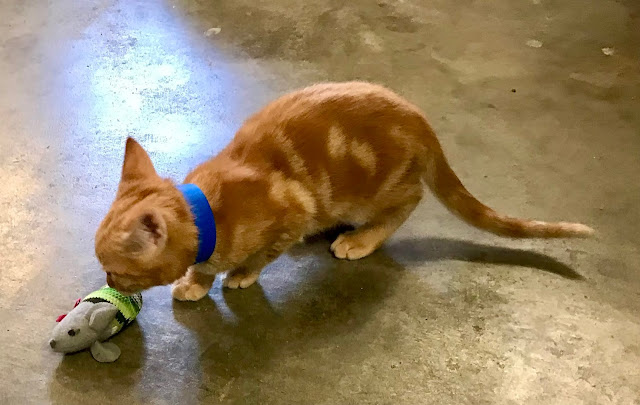 His name is Sunny. He's been here less than a week and continues to "terrorize" his seniors, Hemingway and Joy. The old cats are learning to accommodate the never ending energy and appetite of the little guy. 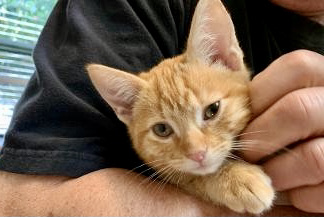 He's got some ears to grow into. Needless to say the grands Addie and Henry, have a new buddy. We all do.
Cheers.
Slainte'.
See you down the trail.
Posted by Tom Cochrun at 12:42 PM 9 comments: