We cry. We rage. Again our hearts are broken. It is an aberration. It is an American act.

As we look at photos of each of the victims we are crushed by the loss of innocence, the sweet childhood, the promise, the hope of young lives, the murdered love of family. We are killing America.

We destroy our truth, we bury our aspirational promise of the Constitution to be a more perfect union, to establish justice, to insure domestic tranquility. We do not secure the blessings of liberty for ourselves and posterity. We kill them. We put money and political power over the sweet faces and the future of our children in America.

Here a teen boy can not buy a beer, but he can buy assault weapons. Why shouldn't 21 years be the mandatory minimum for a gun purchase? Why? Because Republicans are owned by and work for the gun makers. Because Republicans are now afraid to cross the gun crazy nation they and the NRA created during decades of clever deception about the 2nd Amendment.  Because Republicans, not even 10 of them, will vote to make that a law. They are American cowards.

President Biden is limited in what he can. Politics is why. Were it his to act unilaterally, gun safety laws would change. Democrats, who have been pushing gun laws since the murder of innocents in Newtown, are now doubling down on efforts to find ways to bring 10 Republicans into support of the change that 76% of the American people want.

Now parents, grand parents, and caregivers worry about their loved ones. They and teachers and counselors have the  task of explaining to their children or wards that American children, just like them, may be killed in their school, or at the super market, or movie theatre, or church by an assault weapon because there are so many guns and they are so easy to buy, in America.

Gun manufactures bought the NRA and turned it into the money pipeline for Senators and Representatives who have worked for decades to loosen gun laws. Fewer regulations mean more sales. Now that right wing looney authoritarians control the Republican party there is a population of gun owning folks, confused about the 2nd Amendment, who are willing to fight to keep their assault weapons. They are also Americans.

Background checks, age requirements, tighter security on sales and transactions does not mean the Federal government is "coming after your weapon(s)." But a lot of people have been misled and manipulated by the NRA and Republicans into thinking that, in America.

No one can deny there is an epidemic of mass killings in one nation on this planet. There have been many moments like the pain, grief, shock, loss and hurt we now endure. It is an American ritual.

Can enough Republicans find a sense of virtue, decency, and goodness, to honor at least 10 of the dead children? Can the two Democrat problem weasels stay with their party for once and can the Senate finally give the American people what they want in gun laws? Now, that would be an American victory.

Love the children. Keep them safe.

This option is joy... 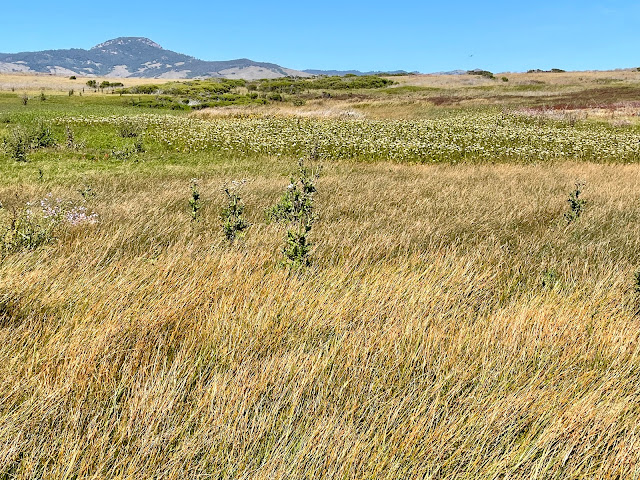 In the season of life there is a lot on all of our minds.
Today, we give it a rest. Instead we celebrate.
Here's the latest report from Lana's back hill garden. 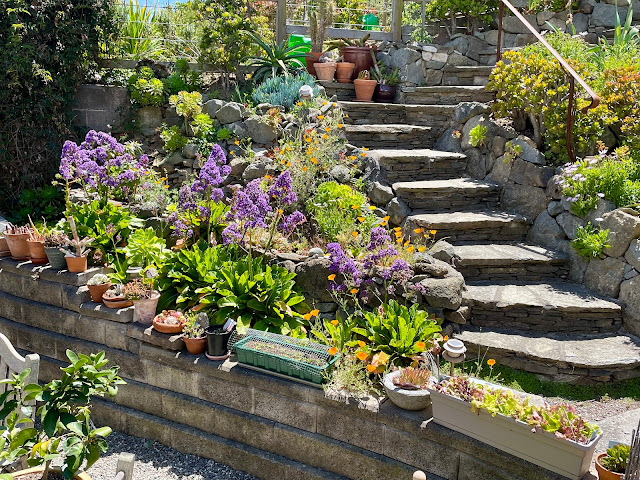 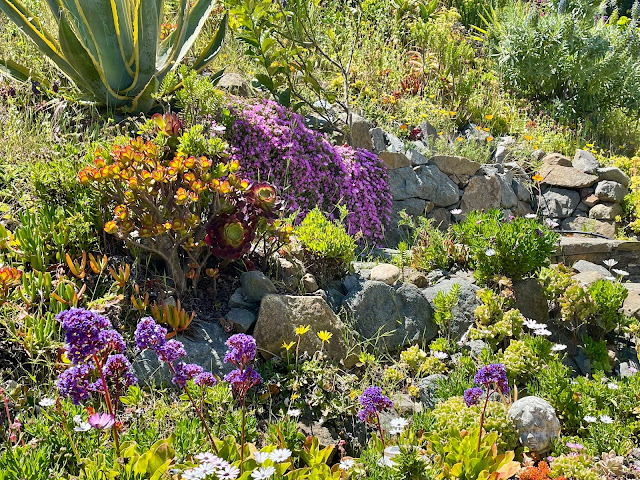 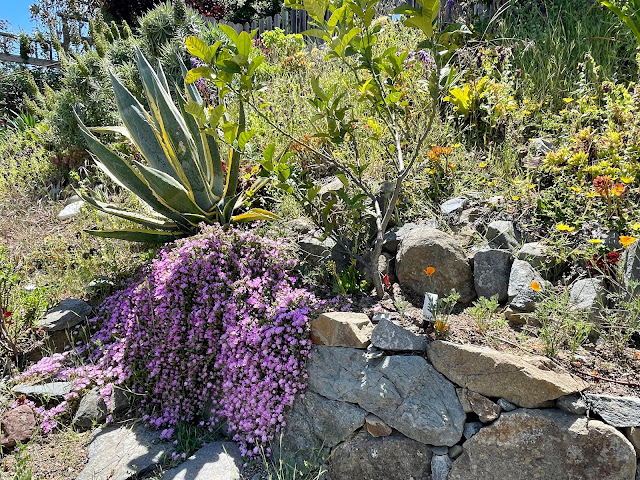 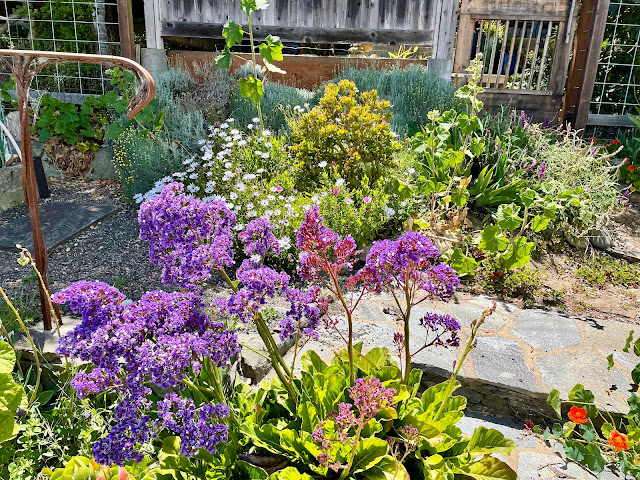 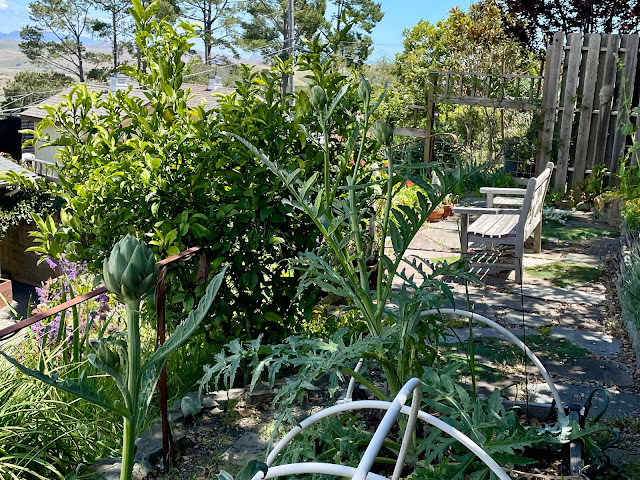 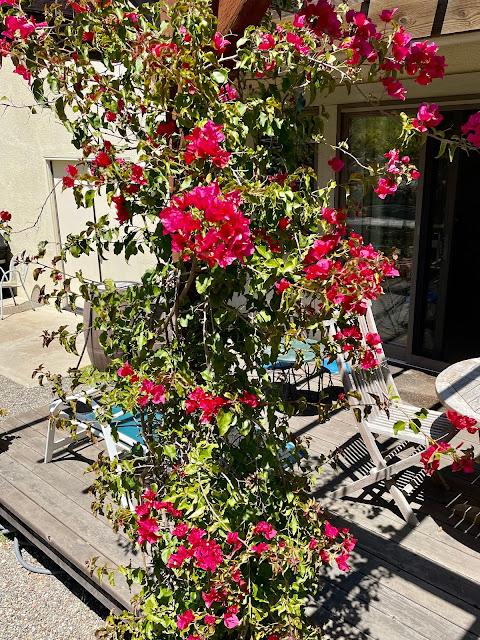 Color and vibrance of another sort as we visit the garden patios of Casa Munch, the home built by Paso Robles wine legend John Munch of Le Cuvier.

John is a creative giant, he writes as magically as he makes wine and builds houses.

He's a great force in a writers group as well. 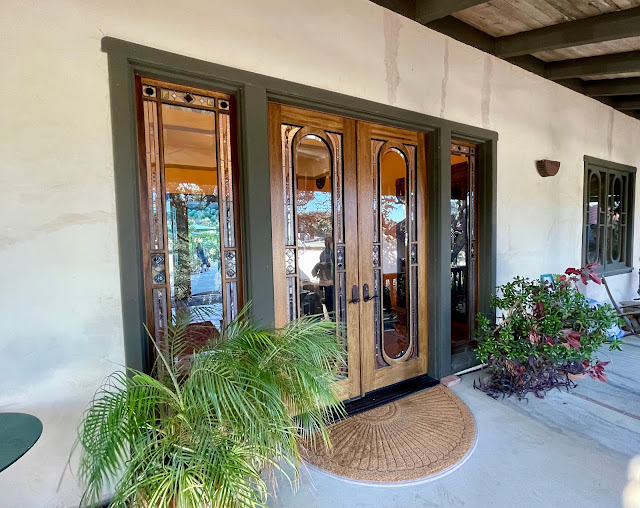 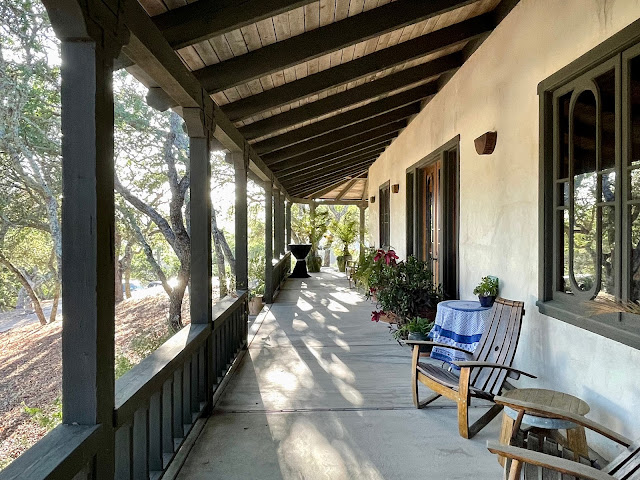 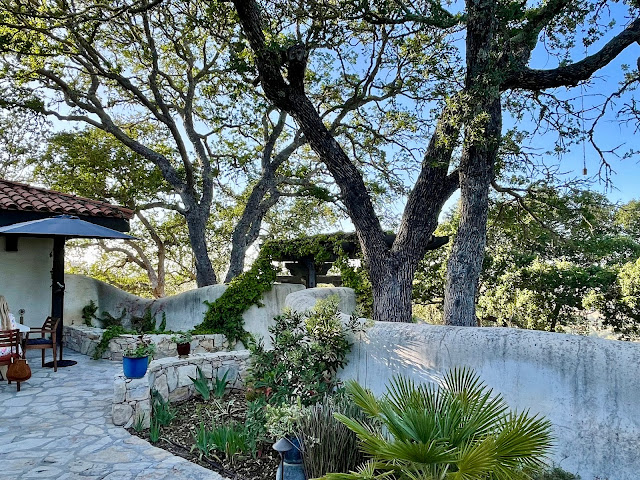 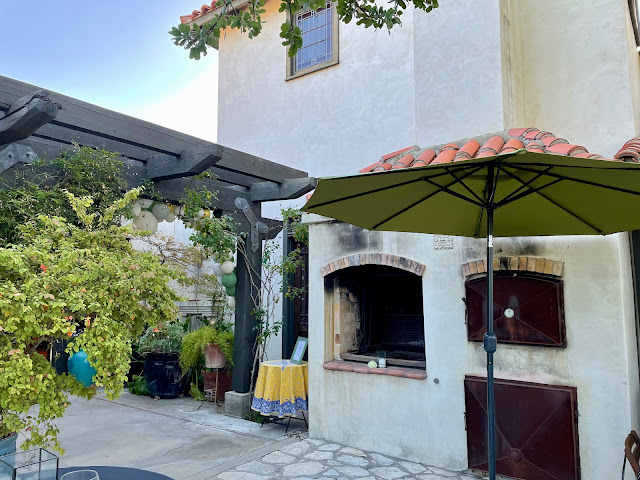 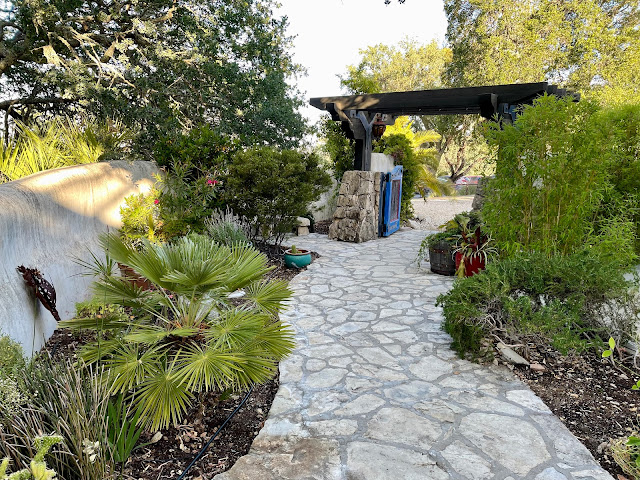 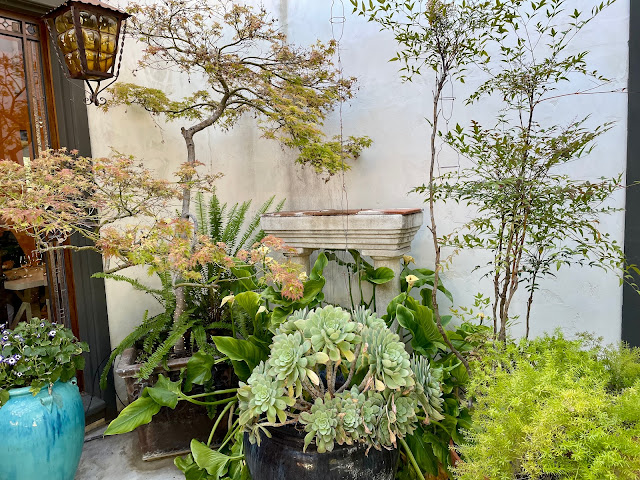 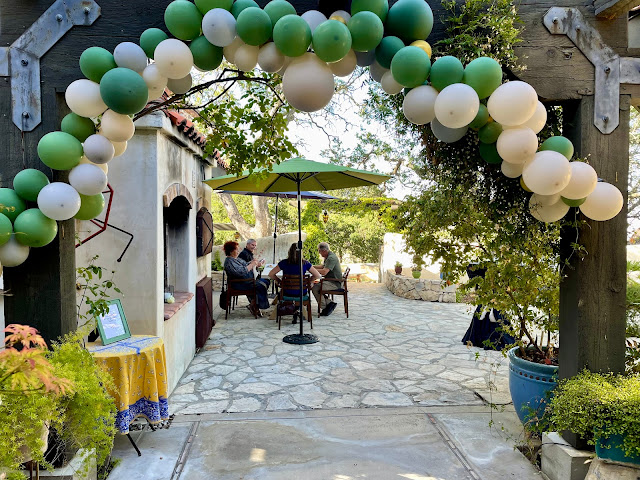 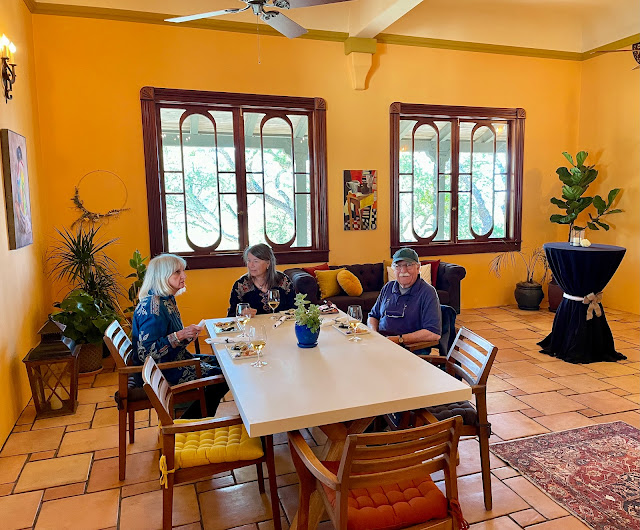 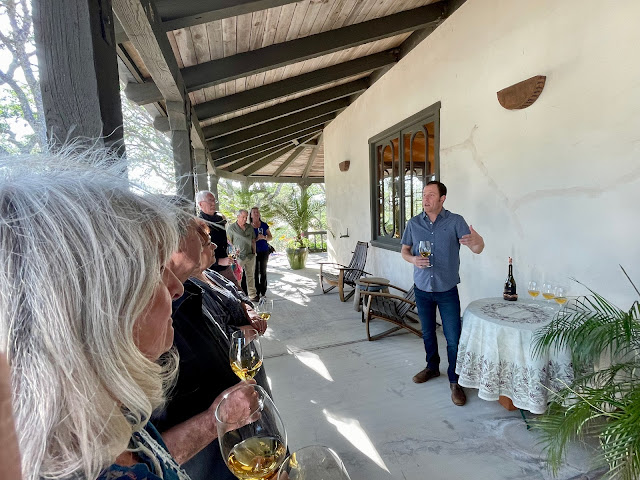 One of his mentees, Clay Selkirk, is a budding legend of a winemaker as well. 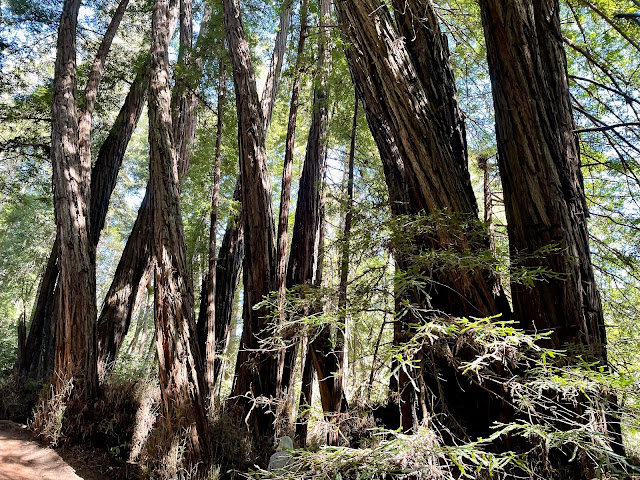 It's called the Twisted Grove, one of the many Redwood families in the Forest of Nisene Marks State Park in the Santa Cruz Mountains near Aptos, California.

I see it as a metaphor of now. 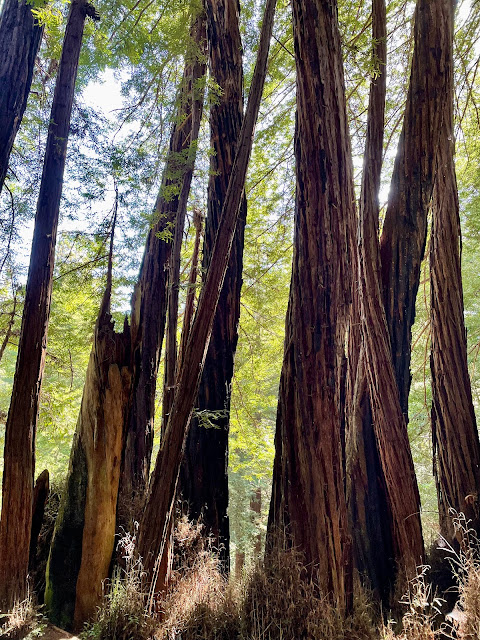 The trees live on the San Andreas fault and changing land in their hundreds of years have caused them to twist to reach to for the light. 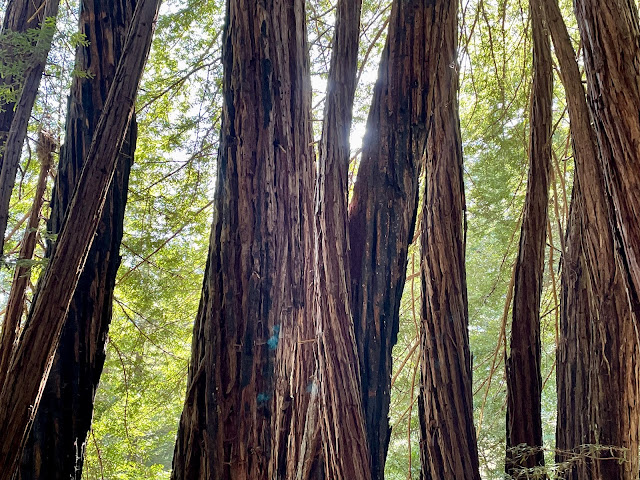 Consider the great palaver about the leaked Supreme Court opinion; That a radical right wing clique appears to be on the verge of banning individual liberty has the majority of Americans dutifully concerned....that the Republican party who packed the court with zealots is more concerned about the leak than a regressive decision, unwanted by a majority of citizens.

The Supreme Court we were taught to vaunt and hallow is exposed as being more horse shit offal of our broken political system. Almost holy respect for the Supremes? The mystique is gone.

Please recall three of the supremes were nominated by Donald Trump, after one nomination was stolen from President Obama. Two were nominated by George W. Bush. What do Bush and Trump have in common? Both lost the popular vote.

The majority of Americans voted against their judgements and character, but they put 5 on the court. At least 3 of those five lied on camera about Roe V. Wade when questioned during their testimony. And on this high court is a man married to a person of questionable character who supported the January 6 insurrection. 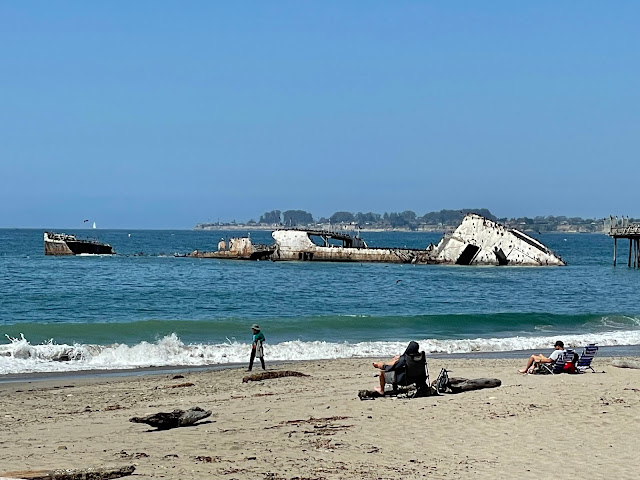 Sinking is another matter.

The SS Palo Alto began as a concrete ship, a tanker built for WW I in 1918. The end of war left the Palo Alto without a mission. In time it became an oil storage barge. Later it was purchased to be an amusement center and opened in 1930 at Sea Clift Beach in Santa Cruz County. 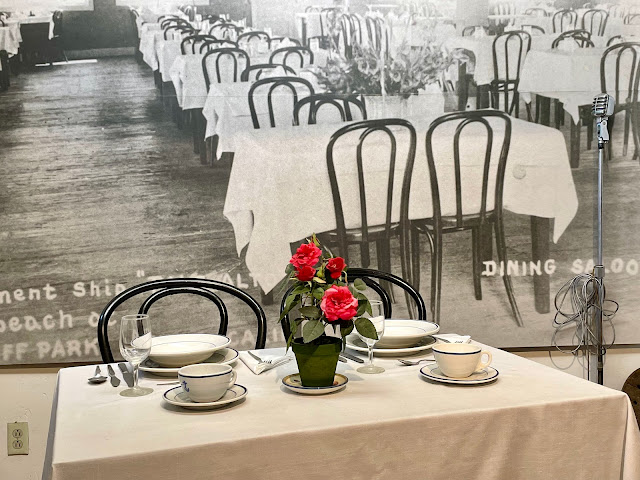 It thrived, only briefly. After two years of dances, dinners and the social life, the depression changed the course of the Palo Alto.
Over the years it languished, interrupted by periods of attempted revival and then more trouble. Storms cracked the hull, there was renewed effort, a hamburger stand, bait shops, more storms and broken masts, more storms and the original crack in the hull worsened, more rehabilitation and repairs, and it was used as a fishing platform. So it was until 2000 when the ship deck was closed permanently. 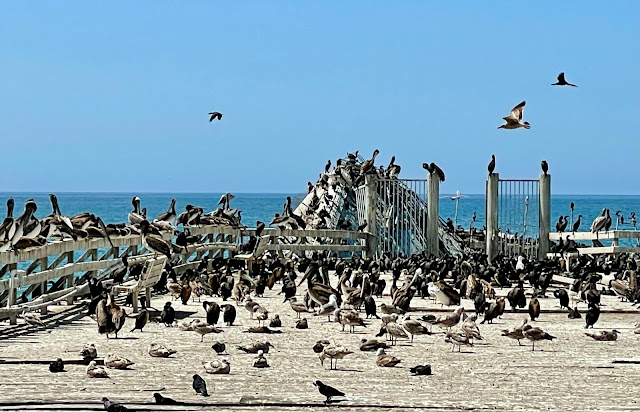 The concrete tanker is now a home for sea birds and a flourishing sea life. It has become a kind of reef, as it continues  sinking, slowly into the sea. 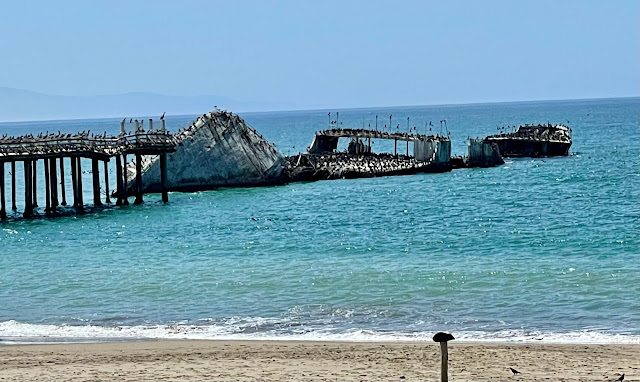 I think this too is a metaphor;
the once important Republican party, broken and infested now with extremists, non traditionalists, anti American authoritarians and fans of autocracy. Republicans I covered are repulsed. Generations passed would abhor the party.
the American ship of state, divided and the constituency not particularly intelligent anymore.
Tragic comedy-an irony;
Right wingers have always worried about subversion and infiltration, by the Soviets and then the Russians. There's a great case to be made how that infiltration target was and is the republican party and their nation breaking, hate your neighbor culture wars, and grievances gaggle. Now they attempt to "game" the system, trying to rule as a minority party.
Twisted and sinking.  We have been before.
Begrudgingly or with belief, we've course corrected, cleaned up the act, busted monopolies, jailed bosses, chased off demagogues, created government compassion, reformed courts, improved, established liberties and continue to evaluate and struggle.
Struggle. That is our history. Forces of enlightenment and liberty pitched against ignorance, greed, self interest and control.
We've endured, almost as long as the youngest of these big trees, that live on a fault line. 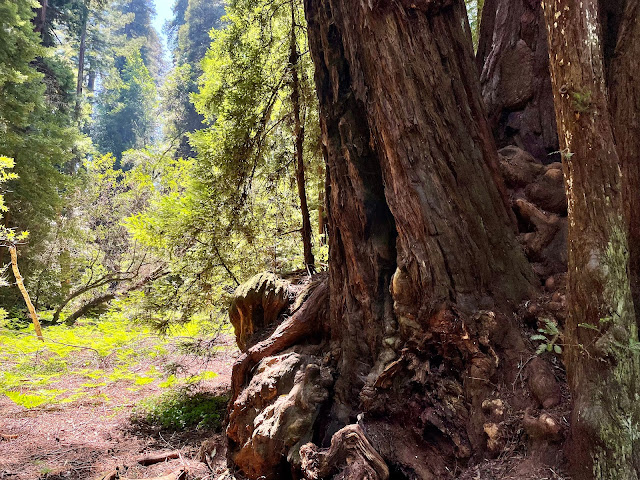 We were at dinner party and in the rambling conversation conviviality I heard myself say I'm ascribing more dignity and favor to trees than I am to a whole lot of humanity. Trees last. By comparison we are on a short timeline.
There are good people. Lots of them. Though we may be old and tired or weary, it's time to go another round for human dignity. There is work to do, truth to be told, challenges to make, courts and government to reform, laws to pass and elections to be won. We can model for and work along side like minded youth. For those of us active in the 60's and 70's, there are lessons to teach and to remember. 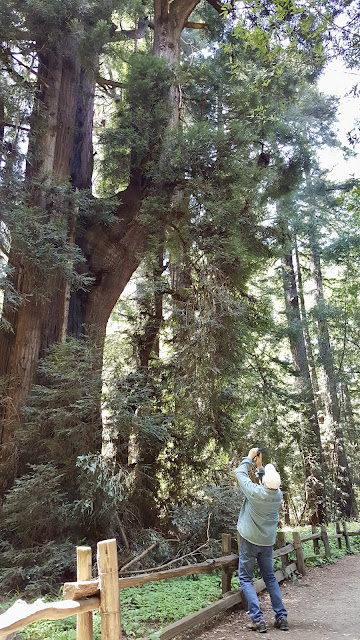 Trees reach for the light. It's what they do to live for hundreds and thousands of years.  Democratic republics could take note.
Find the light.  See you down the trail.