HOW DO YOU DEFINE RADICAL

Today's sentiment was launched by thoughtful observations of Jed Duvall and Stephen Hayes who authors the extraordinary blog The Chubby Chatterbox.
You can read Jed's thoughts in the comments of yesterday's post on the Gettysburg anniversary observations.
The Chatterbox, which is linked in the column on the right, got my wheels turning.
This is always a day of melancholy. On the one hand it prompts a childhood sense of joy and delight. On the other it recalls true patriotism, devotion and sacrifice adjoined to how we modern Americans regard the day as little more than a reason to eat, drink, be merry and watch bombs that sparkle instead of those that have more lethal outcomes.
After all is said, I come down on the thought that more than anything this is a day that should celebrate conviction and principle. John Adam's did not attend 4th of July celebrations, despite his contribution to our birth. He did not because he noted the Declaration was "declared" on July 2nd and he thought that should be the day of observation. The formal declaration was adopted on the 4th, but the actual separation from England occurred on the the 2nd.
The Second Day of July 1776, will be the most memorable Epocha, in the History of America. I am apt to believe that it will be celebrated, by succeeding Generations, as the great anniversary Festival. It ought to be commemorated, as the Day of Deliverance by solemn Acts of Devotion to God Almighty. It ought to be solemnized with Pomp and Parade, with Shews, Games, Sports, Guns, Bells, Bonfires and Illuminations from one End of this Continent to the other from this Time forward forever more. You will think me transported with Enthusiasm but I am not. I am well aware of the Toil and Blood and Treasure, that it will cost Us to maintain this Declaration, and support and defend these States. Yet through all the Gloom I can see the Rays of ravishing Light and Glory. I can see that the End is more than worth all the Means. And that Posterity will tryumph in that Days Transaction, even altho We should rue it, which I trust in God We shall not. (The Book of Abigail and John: Selected Letters of the Adams Family, 1762-1784, Harvard University Press, 1975, 142).
That is an example of the American spirit.
JULY 4TH REFERALS
If you have not seen the Gettysburg post
from yesterday,Here is an easy link
And a true reprise-worth considering again-
A UNIQUELY AMERICAN DAY 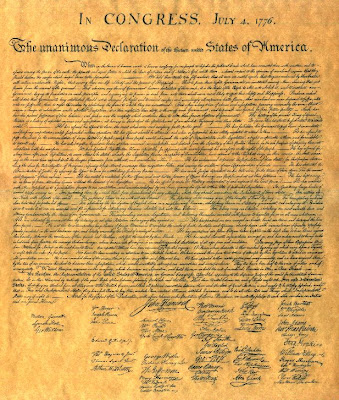 Do your self a great favor today.
Take a couple of minutes to read
the Declaration of Independence by linking here. 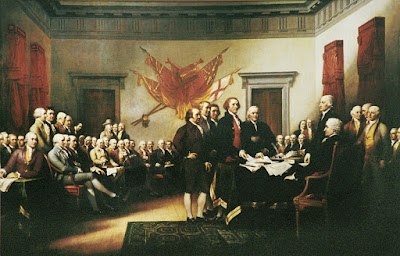 Here's something to add to your conversation at a barbecue or party today.
Two of the framers and signers of the Declaration
John Adams and Thomas Jefferson, the second and third
Presidents of the US, died on July 4th 1826, the
50th Anniversary of the signing.
Both men had been ill.  Jefferson asked his doctor
"Is it the Fourth yet?"
"It soon will be," Robley Dunglison replied.
Later Jefferson awoke to say,
"I resign my spirit to God, my daughter to my country."
Adams was asked if he knew what day it was.
"Oh yes.  It is the glorious Fourth of July. It is a great day. It is a good day. God Bless it.  God Bless you all."
He lapsed into unconsciousness. Later he awoke and said
"Thomas Jefferson.  Thomas Jefferson survives."
Actually Jefferson had died a couple of hours earlier.
It remains an amazing coincidence that the two men, infirmed and dying  held on to life until the 50th Anniversary of perhaps America's greatest day.
Happy Independence Day!
See you down the trail.