THE FUTURE IS NOT CHEAP

Sometimes vision comes with a price and acrimony.
The US is overdue in brining rail trail into modernity. Other nations put us to shame and our transportation matrix suffers by lack of high speed trains.  This week the California legislature will vote on Governor Jerry Brown's attempt to build the nation's first high speed line.
Many criticize the plan, saying it is too expensive, we can't afford it in a recession, that the opening leg is on a non crucial route.
Governor Brown is quoted as saying "Suck it in.  We've got to build, we got do it right."
I agree.  There is probably never a time we can "afford" to undertake a leap into the future, so it is easy to put it off and as time passes it never happens.  Exactly why the US is a pathetic player when it comes to rail travel.
There is a Chinese wisdom, from LaoTsu, that says "a journey of a thousand miles begins with a single step."  This is California's opportunity to start the US on that journey. It will cost more later, it is already seriously delayed and it will be good for future generations.
Jerry Brown's father, Governor Pat Brown authored the California State Water Plan and helped push the Golden State into the future. There was acrimony over his idea, but the flourishing of the Central Valley agriculture, the water resources in Southern California and other measures have proven to be the positive outcome of a visionary plan.  In this case it is "like father, like son."
High speed rail has proven itself in Germany, Japan, France and other nations.
It's time to "suck it up" and get on with the future.

DAY FILE
THE SPIT & THE ROCK 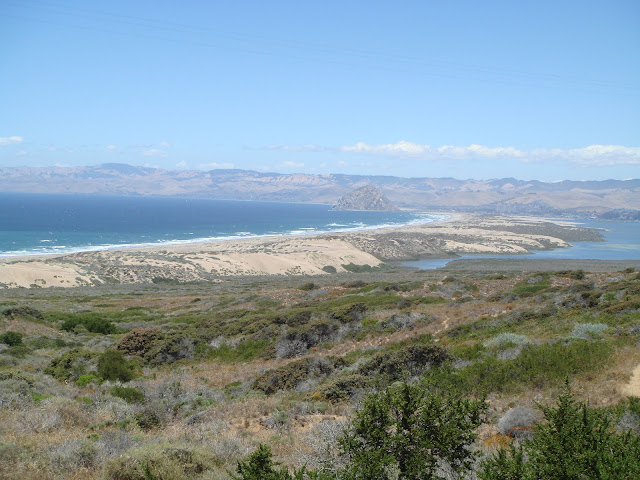 History abounds in this shot.  The Rock, at the end of the spit is the famed Morro Rock, a volcano plug and one of the "Nine Sisters" of volcanic and tectonic formed mountains that follow the central coast from Morro Bay, south to below San Luis Obispo.
The "Rock" was named by the Portugese explorer Juan Cabrillo in 1542.  He thought the rock looked like a Moor, the North African people of whom the men wore turbans.
The spit is naturally occurring, but augmented by breakwaters built by the army.  During WW II landing craft were housed in the harbor and the spit was used as part of
training exercises.  Some of the D-Day invaders practiced  "hitting the beach" from landing craft on the spit.
In December 1941 the Morro Rock was struck by shells fired from a Japanese U boat.  It was the same day the oil tanker Montebello was sunk by a Japanese submarine.
Today the Spit offers a scenic and athletic hiking trail.
INTO THE SUNSET
Here are a couple of minutes of nature for you
See you down the trail.