A PARTY OF A BOMBS AND ALIENS 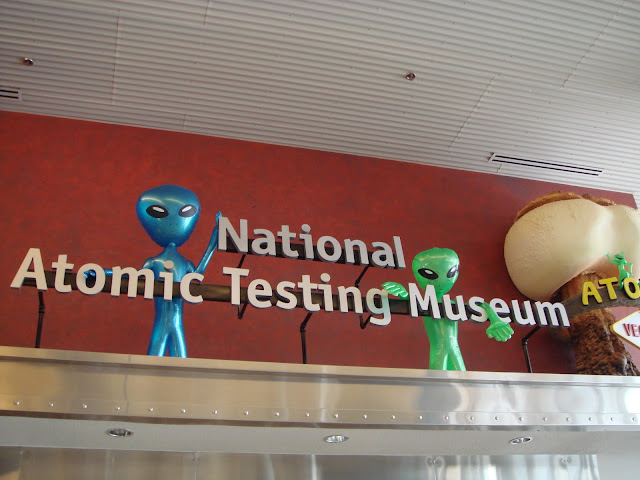 So maybe it just takes the curiosity and questioning nature of an old journalist, but I've got to wonder what the federal government, or at least a sliver of it, is up to with the legendary and notorious Area 51.
BACKGROUND: The National Atomic Testing Museum,an
affiliate of the Smithsonian Institution, is a first class and
highly informative museum. (Link to it above to see that is so.)
It deals, in detail, with the history of American nuclear development and testing.  It is a credible, balanced and historic record, done in an accessible and even entertaining way. I've been there before and urge all visitors to Las Vegas to leave the strip and the usual Vegas past times for something very special. Yes I know telling Vegas visitors and habitue's to visit a science museum is a kind of odd duck drill, but I persist none the less. It is of course next door to where the testing was done, so despite the Vegas address, it is a serious place and good for the public record.
NOW THE CURIOSITY: As you see above Aliens are hanging around the somewhat staid and straightforward museum. It is part of a brand new AREA 51 MYTH OR REALITY exhibition.
Here's the teaser video.

If you'd like to read more, here are a couple of links.
Huffington Post piece by Lee Spiegel
and
A Dateline Zero post by D.E. Paine

I think the exhibit is a bit on the hokey side, but it also
contains some surprising documentation and data about
the air base, facilities, history and air craft of Area 51, Groom Lake Airbase.
The exhibit is a blend of serious and silly.  The tone of the display is Men in Black, but inside are documents, records, displays and video pieces that weave an intricate fabric of
flight research, reverse engineering, investigative journalism, testing programs, schematics of the compound,
maps of the runway, including what is perhaps one of the world's longest, the government's flip flop on the infamous Roswell incident and campy culture, plus more.
It is this curious mixture of pop culture, UFO conspiracy ideas, military flight experimentation and serious science that has raised my curiosity.  There is a more open acknowledgment of Area 51 history, fact and achievement than I have seen in decades. And that the museum and the cooperating government agencies mix it with the popular lore of the Area 51 myth is even more curious.
A couple of the stronger video elements include an
interview with the director of the SETI-Search for Extraterrestrial Intelligence, program and an appeal by a former Air Force General and scientist saying it is time to allow the military and science to consider UFO's and aliens in a serious way that does not damage reputation or credibility.
So I ponder, what is the real message here?
But then again, it is Las Vegas, and maybe this all should stay there.  What do you think?
POST CARDS FROM THE EDGE 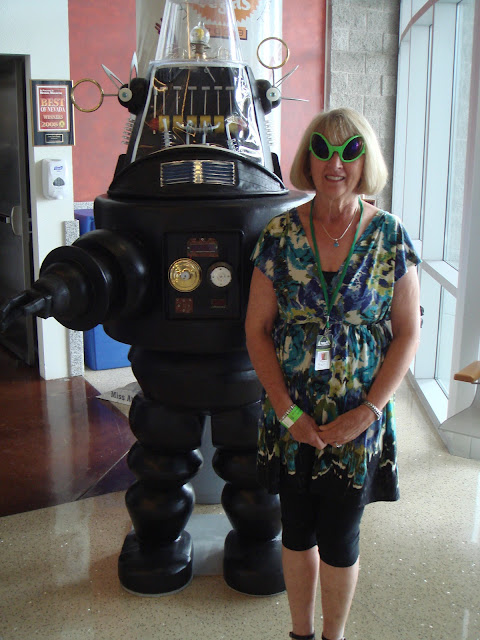 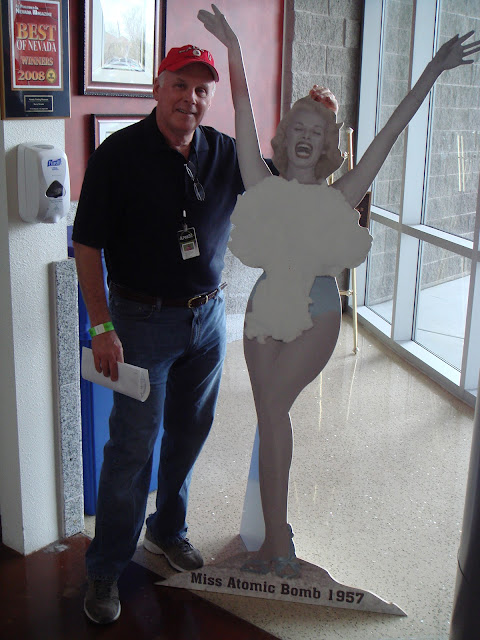 My buddy Jim is standing next to the cut out of the actual
Miss Atomic Bomb of 1957.  And for those of you with visual problems, her cover up is indeed the mushroom cloud.
As a kid, I had nightmares about the mushroom cloud, especially on those days we'd see a film strip of nuclear blasts and then do a "duck and cover" drill beneath our desks.
I remember Mrs. Rogers threatening to give me a "paddling if I didn't get under my desk like all of my class mates."  I protested that if a nuclear bomb was to hit anywhere near Muncie Indiana, the desk would be scant protection, so what was the point?  I'd rather watch the windows blow in than get under the desk.
However, I might have been less anxious if I had seen a film strip of Miss Atomic Bomb. It's all in the spin isn't it?
See you down the trail.
Posted by Tom Cochrun at 12:35 PM