A STAIRWAY TO WHERE? & AN UPDATE FROM BOB

MORE THAN NOWHERE
One afternoon as a group of us gathered, a friend
looked at our back hill steps and said-
"Where do those steps go?  No where?"
It may be a fair question. 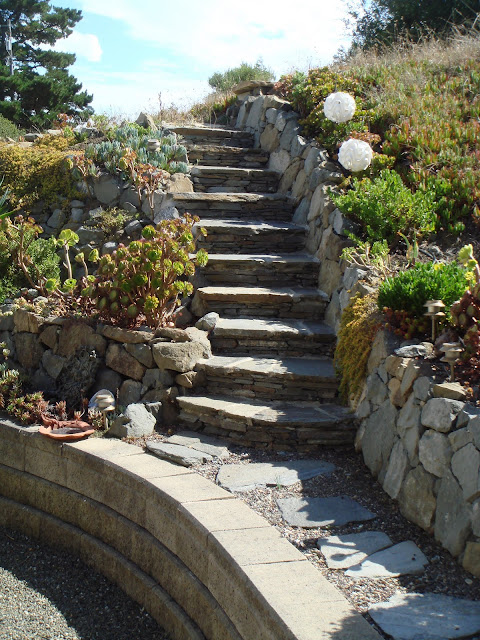 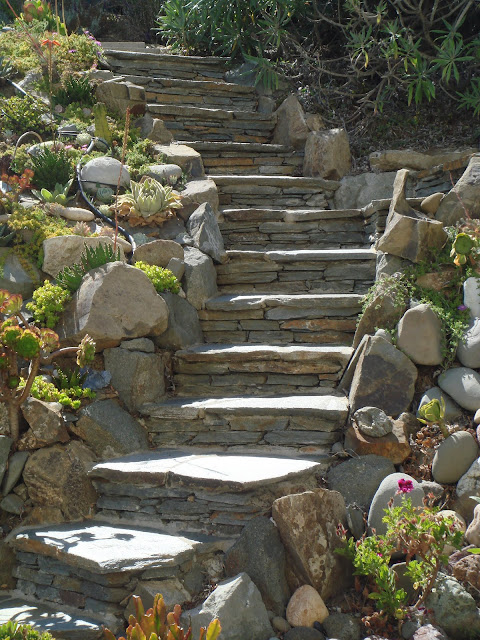 They do appear to lead to nothing in particular,
with the exception of this small set 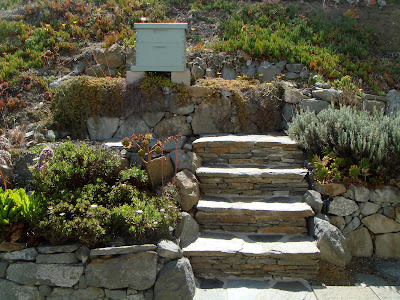 that leads to the bee hive-
remember those golden Italian bees from Glenn?
Actually, the steps have helped the contour of a
steep slope, provide planting spaces and they lead to views of the Santa Lucia range. 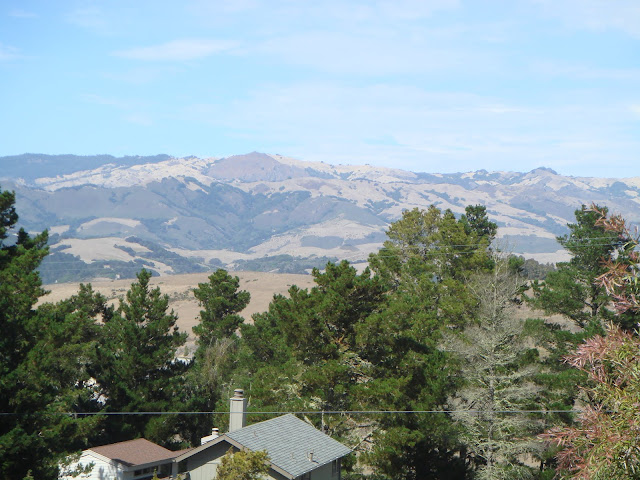 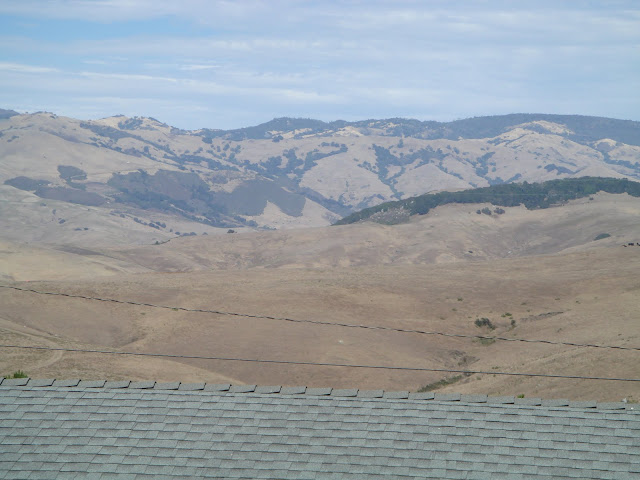 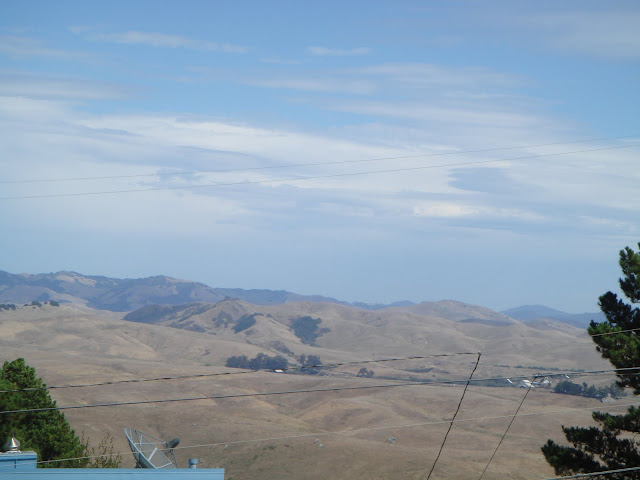 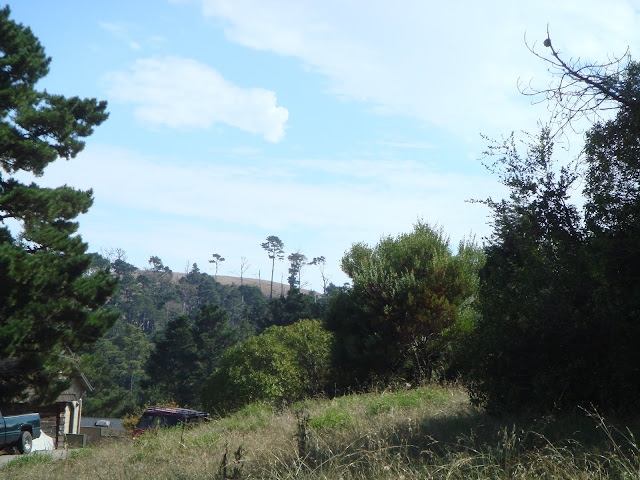 They also provide an interesting view
of a conversation space.
In fact it was here, the friend asked about the steps. 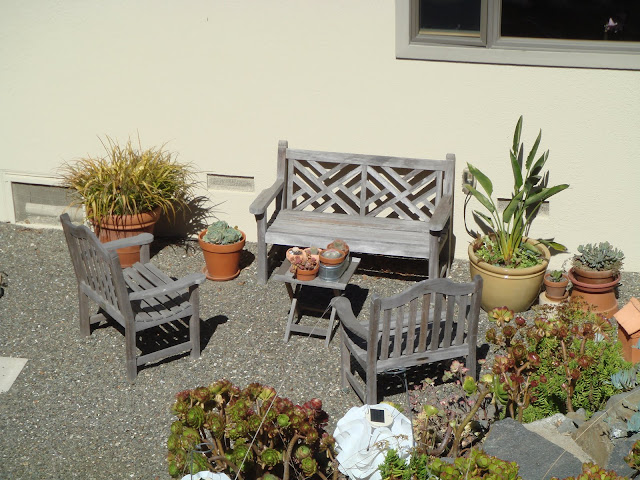 So, "no where" is not the right answer. And
keeping them swept, gives me exercise and great views.
While on steps-
I liked the light and shadow play on another set of steps. 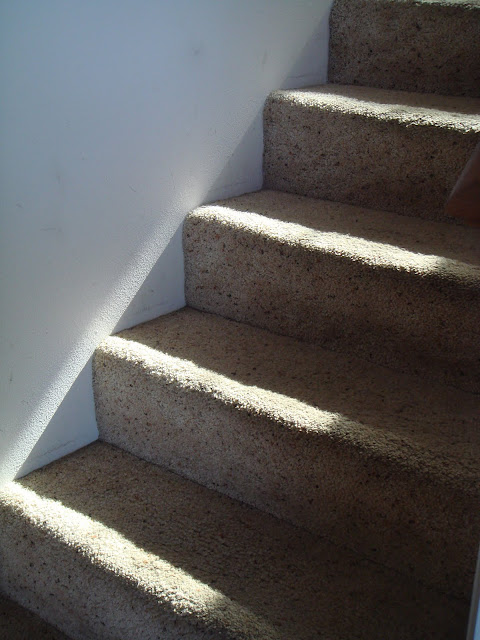 A NOTE FROM BOB
You may recall that I have been posting notes
from my friend and former radio partner-Bob Foster.
Bob is preparing for a Bone Marrow Transplant.
Here is his latest note.
My Dear Friends,
For some reason, one which I have yet to understand, God is connecting me with people who had near death experiences. I have met them at Mayo and the Gift of Life Transplant House. Neither of them are currently patients. One of them is a staff member. When Jim was 6-years-old, he was run over by a school bus. He still has an indentation in his forehead from the bus's bumper. He had me feel it, so I would believe him. Jim was in a coma for several days. When he regained consciousness, Jim's mother was at his bedside. She told him what had happened. As she began to talk about the ride in the ambulance, little "Jimmy" interrupted her, "I know. You were wearing your blue dress and holding my hand."  His mother insisted he was unconscious. Jimmy then described seeing his mother, seated next to him in the ambulance, from an upper corner of the inside of the ambulance. It was like a diagonal ceiling shot from a movie. His spirit had left his body and was hovering above.

Today was a rough day for me. I got little sleep last night. The medication induced dreams were so vivid. I am afraid to take sleep medication every night for fear of addiction. I awoke at 1:45 with chills which morphed into a fever. This has been happening a lot lately. My doctor ordered extensive blood cultures. Infection, with my immune system about 10% of a normal person, would not be a good thing.I do not know the name of the tech who drew my blood. I started to tell her why we were doing this and she said, "I will pray for you." That opened the door to talk about faith. We were going to be there for awhile, about 8 ounces worth. She dropped a bomb, "I died in this department. My heart simply stopped. They brought me back. I now have a pacemaker. I was 6 1/2 months pregnant. My baby died. But I saw the light. I didn't hear angels singing, but I definitely saw the light. The next thing I knew, the doctors had brought me back to life. Some people think I should be angry at God for losing my baby. I know my son is in heaven and I will see him someday. I have a 12 year old daughter and I love her very much.""Have you read the book 'Heaven is For Real," I asked.  (The story of a 4-year-old's visit to Heaven.)"Yes! I'm reading it now.  I can hardly put it down."In the book, Colton Burpo spends three minutes in Heaven. Over the next two years, he relates his scripturally accurate experience, much to his parent's amazement. One chapter has Colton telling of a rainbow beyond human description. Friends, last night, in one of my dreams, I saw Colton's rainbow. It was beyond description. I don't know if God is preparing me for witness, mission, a rougher road ahead or my own death. Only He knows. But He is doing something. Why else would I meet a man from Janesville, WI, or get this particular lab tech, out of dozens, this morning? We'll get the blood culture results sometime Tuesday. Two more chemo treatments remain. Bone marrow biopsy 9/6. Doctor with report on 9/12. Foster.
See you down the trail
Posted by Tom Cochrun at 11:46 AM