I'm all for a free and unfettered press, but I'm also for fair play.
The Newsweek cover of Michelle Bachman is a cheap shot by editor Tina Brown.
It is not the first time Brown has created  a cover that infuriates, but this time
it is uncalled for.  I am not a fan of Bachman and she has made statements
that deserve examination and scrutiny, but finding such an unflattering shot of an attractive and even glamorous woman is bogus.  Shame on Newsweek.
THE OTHER PHOTO FLAP 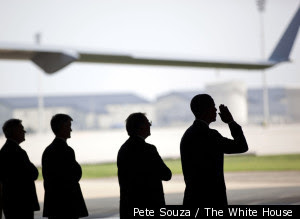 This photo, released by the White House has set off another round of comment about
media access at memorial services or the the ceremonial reception of bodies of fallen US service men and women.  It has been the policy of the White House and the Pentagon
to restrict media access if family members object to a media presence.
It is a sensitive issue of course and ultimately family wishes have been observed.
We have seen some photos, when family members permit a media presence.
I believe in full access and think that arrangements can be made to respect the decorum
and sensitive nature of such moments.  Some were unhappy, even some on the White House staff, that the picture above was released.  It is a good thing to have such a captured  moment for history and to show the honor afforded by and the solemnity of the Commander in Chief in paying respects for our fallen troops.
It is not unlike battlefield access. When American troops are put into harms way, on behalf of the nation, then we have a right and an obligation to watch, see and consider the full impact and obligation of committing to war. We in this case being we citizens, on who's behalf the troops are in harms way.
Not to see can too easily put the unpleasantness out of mind.
DAY BOOK
ZEBRAS ON THE CENTRAL COAST 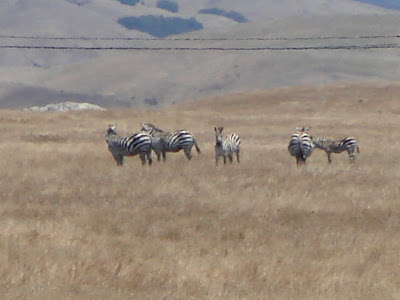 A part of the herd on the Hearst Ranch.
Remember the controversy about the shooting of a couple
of the herd back in January. Link here. 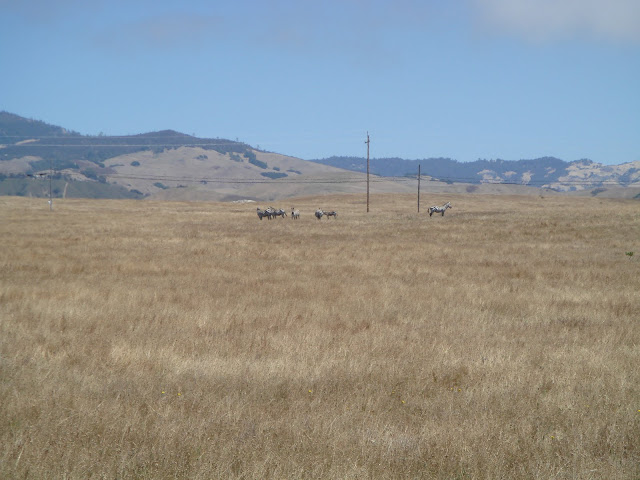 See you down the trail.
Posted by Tom Cochrun at 12:57 PM