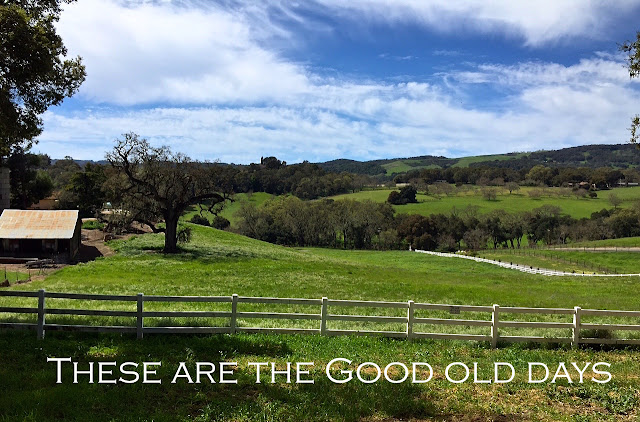 "...these are the days of miracle and wonder, this is the long distance call..."
Those Paul Simon lyrics meander across the mind a lot these days.
Washington is to blame. Here we are in bucolic beauty while dream killers, planet killers and child killers conspire their ways. We'll return to that thought after first we witness a rescue. There are still plenty of good gals and guys riding this blue marble. 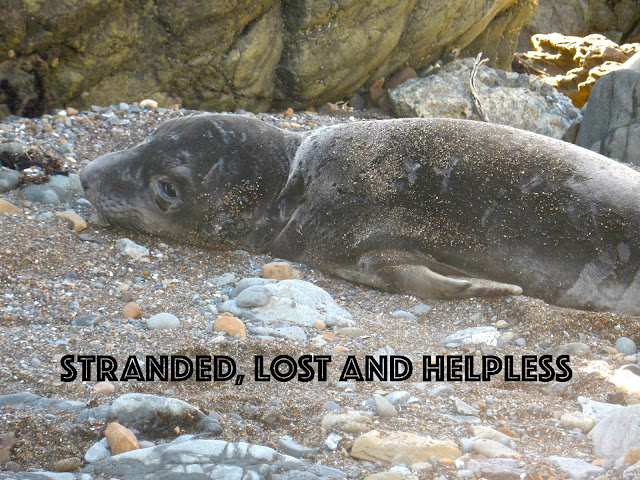 One look into his eye tells you quickly this poor fellow is in deep trouble. He's miles from the colony and his mother who probably has already departed for hunting grounds. He's left on his own in the primordial drama of learning to swim, survive and orient to where he must navigate to find life sustaining food. Presently he is beached and frightened. 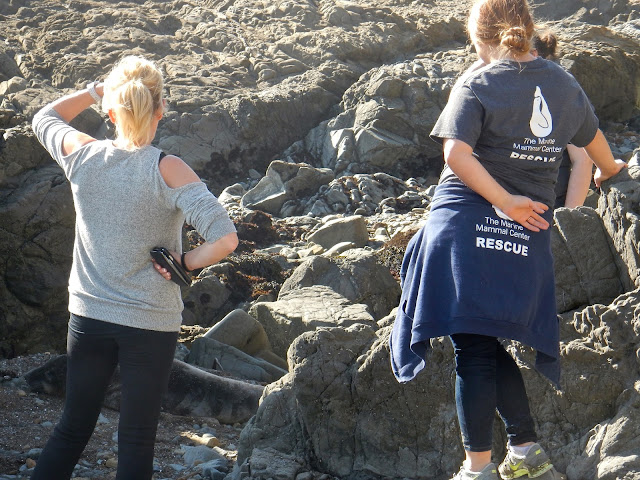 Discovered by the citizen on the left who stood guard protectively until help arrived. 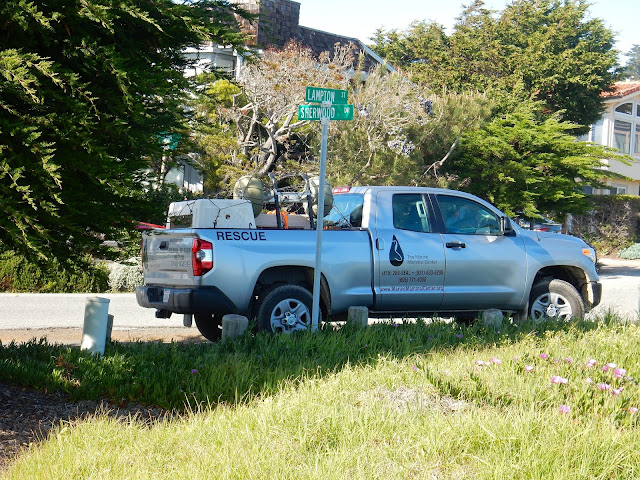 The marine mammal rescue crew traveled up from Morro Bay headquarters to the Lampton Cliff access in Cambria. 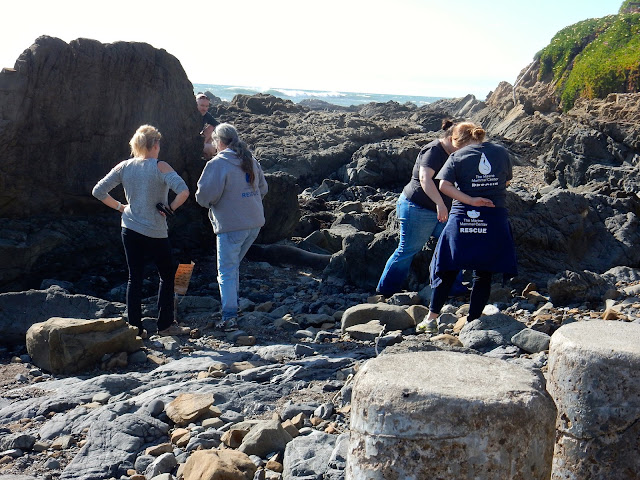 After consideration the experts decided the best course of action was to post a kind of "please stay away" warning while they logged his location. On this day the tide was extraordinarily low and the best hope is that when the Pacific reclaimed this rocky reef, the little fellow will be revived by the big blue and resume his seaward journey. 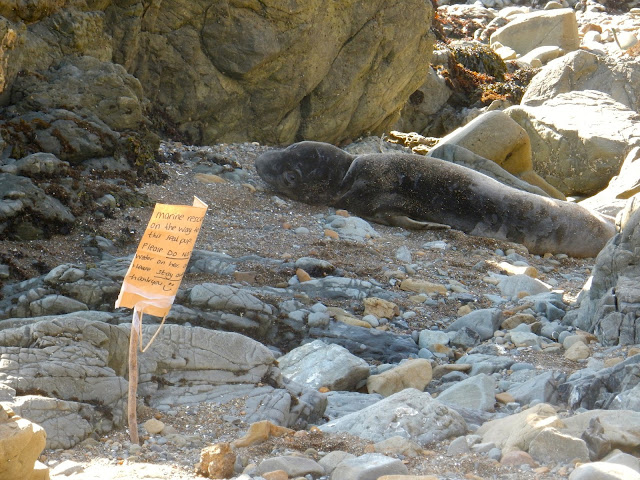 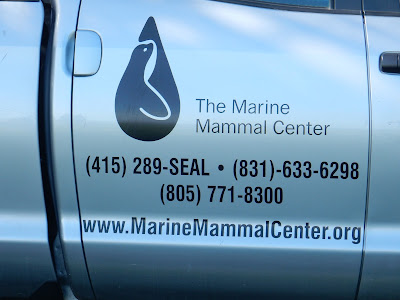 inhumane humanity
The Trump toll mounts as he presses the idea the US can bomb anywhere.
War is hell and innocents die but the toll of civilian deaths in less than two months of the new administration is appalling and worth remembering because as a candidate the President vowed to kill families of terrorists. As Commander in Chief women, children and other non combatant innocents have died, under his orders. 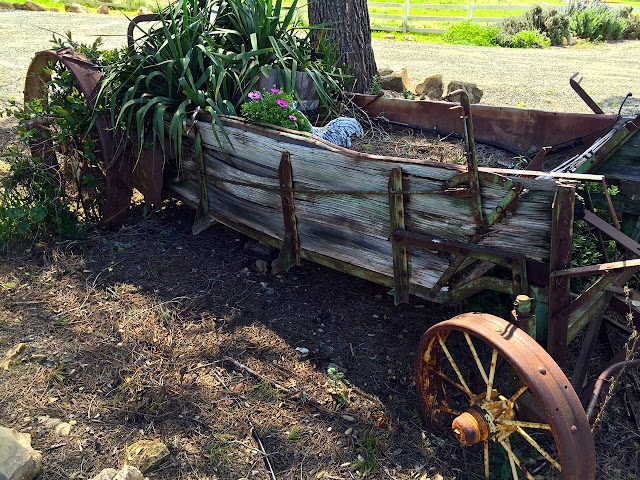 the republican speedwagon
People I know who are traditional, establishment or legacy Republicans are just sick. Their nominal party controls the House, Senate and White House and they can't spit straight.
The embarrassment of the failure to pass health care reform exposes the bankruptcy of what has been leadership and Republican philosophy the last 6 years.
This President didn't need Mitch McConnell's vow to put a wrench into government gears as he did to Obama. The Republican regime failed so miserably by self destruction. Do they have no capacity to govern? The failure reveals their obstructionism in the last 8 years as the betrayal of the American people it was.
One has to wonder if the ideologues, egoists and zealots have eaten traditional and practical Republicans.

is redemption possible?
This is not something Democrats, liberals or progressives want to hear, nor do regressives, or that strange breed of Trump supporter-be they the angry, the betrayed, easily fooled or the true deplorable-but there is a way the Republicans can recover their decency. In fact they could do more than that, they could engineer an American power grab almost without precedent.
There are actually two ways forward to power.


when republicans had ideas
Democrats won't want to hear this either, but if Republicans behaved as rational politicians and statesmen, a post intervention Trump or a post-Trump Republican consensus could advance an agenda especially if they authored a jobs bill and an infrastructure repair road map. Before the current crop of self identifying Republicans get all worked up, consider these facts.

That sort of Presidential mindset is in the Republican DNA, despite the Roger Ailes Fox News era republican pea brains.
Is it fantasy land to think Republicans and Democrats
could:

republican house cleaning
Republicans could do this. They are sitting the edge of chance to control government for a long run. But they probably won't because they "souled out." How else do you explain Trump/Bannon and the nut squeezing power of the so called Freedom Caucus of politically brain dead or Paul Ryan trying to sell his Randian approach to politics.
Does Ryan not realize Ayn Rand, really Alisa Zinov'yevna Rosenbaum was a fiction writer of moderate talents. Her Objectivism is not a sacred text, it was the stuff of a novelist's creative mind. It is no more valid nor sacred than Sci-fi writer L. Ron Hubbard's Dianetics that followers turned into Scientology. Maybe his own party sent Speaker Ryan a loud message about the validity of his stingy political assumptions based on his allegiance to a fictional fabrication of a worthless "pseudo philosophy."
There is more, any Republican quoting Rush Limbaugh, Sean Hannity or Alex Jones should be drummed out of the party and into the corner where they await deportation to Syria. These guys are not political gurus, they are bull shit artists who got rich pretending they know something, loudly.
In the meantime we've moved from the gridlock and partisan warfare of the last several years to Republican intra party warfare, ideological thuggery and knife fights, while the Democrats look for a compass and a soul.


Staccato signals of constant information
A loose affiliation of millionaires
And billionaires and baby
These are the days of miracle and wonder
This is the long distance call
The way the camera follows us in slo-mo
The way we look to us all, oh yea
The Boy In The Bubble--Paul Simon