GOING IT ALONE AND ANOTHER WAY 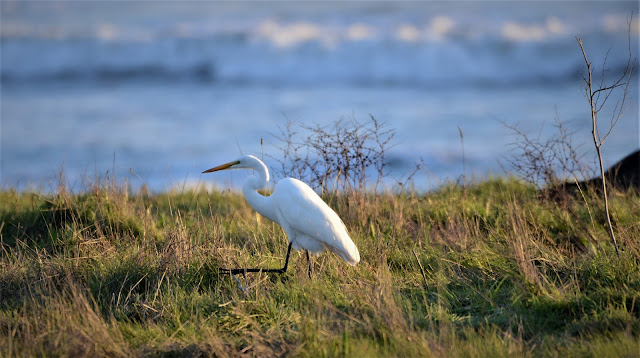 Photo by John Stanley
Have you found there are times when life just positions you in a way that you are alone in something? It may be temporary or for a specific purpose but for a duration, there it is, you are out there alone.
Being out of step, out of the norm or not in the "flow" is that way. I'm about to walk in that world, by way of nerdom, or is it nerddom? What I think is a practical solution to a little problem casts me in that role.
I've got a snazzy pair of tennis shoes, they are blue and until recently were laced with bright yellow strings. They're excellent platforms for this aging player. The shoes are part of a signature line of Novak Djokovic, a pro whom I admire. One of the strings broke! I saw it coming and tried to prepare but finding a bright yellow shoestring proved futile. So when the moment arrived and necessity dictated, I removed a white string from an old pair of tennis shoes I wear working around the house.
There are white stripes on the blue shoes so it's not entirely objectionable, however I will enter the court at my next match with a left foot brandishing a yellow laced shoe and the right with the non matching white.
And since life is complicated I replaced the purloined white string from the "work" shoes with the only thing I had available, a black lace. You see how rapidly I'm devolving into geek hood. One broken string thrusts me into wearing two non matching pair of tennis shoes. Alone in this predicament certainly, but I've reached an age when I don't think I'll be embarrassed about the matter. "Frankly my dear, I don't give a damn!"
And this stroll in mismatched oddness will provide a chance to measure folks on their power of observation and how they may respond. 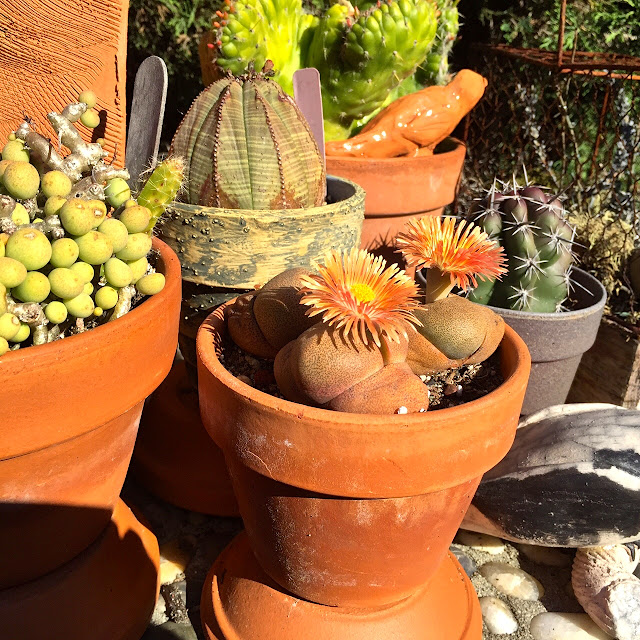 A couple of Lana's favorite succulents, Living Stones, are  showing proof of life. 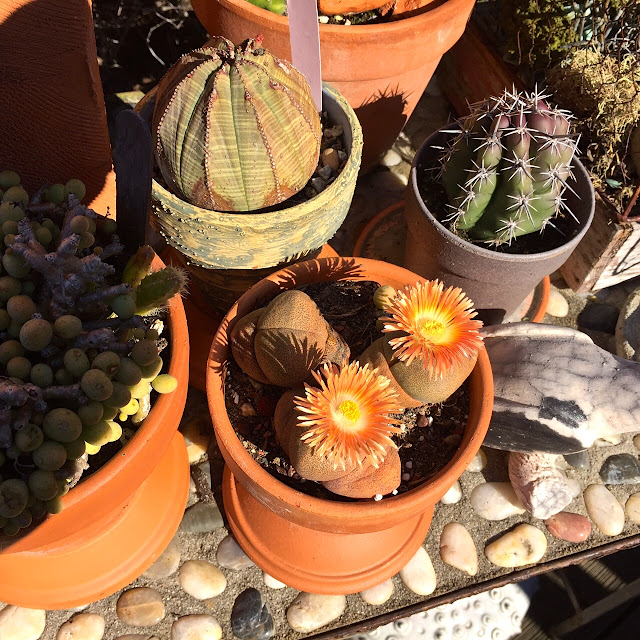 dumber than a box of rocks
circus trumpus
The unfit, unqualified, predator president is working overtime to prove that he is also an idiot.
Case in point. America auto makers sold a record number of cars and earned record profits for the last two years. Auto workers benefited, consumers loved the product and it has been an American success story. So what does mr tweet propose? He wants to revisit the whole matter of gas mileage and government guidance. If he is successful he will force the entire industry to adjust. What will happen? Cars prices will rise. If fuel efficiency standards are trimmed American car owners will pay more at the pump because they'll use more gas. There will be a cascading affect on air quality standards. Can he really be this stupid? 85% of the public supports improved fuel efficiency. So why fool with CAFE standards, as the guidelines are known. To paraphrase the vulgarian himself. Really Dumb.  Really, really dumb.
But there is California, ready to go it alone. This state won the right to establish its own fleet standards (CAFE) for fuel efficiency. The affect has been that most car makers build according to the California standards. California promises to fight for its waiver right to set higher fuel standards, standards most Americans want.

even the foxistas get it
The star of trumpland, the American nightmare, is on the skids. It's bad when Fox News viewers give him an approval rating of only 41%. At the same time in his administration President Obama had a 63% approval rating.
Fox News finds only 7% of their crowd say repeal and replacement of Obama Care should be a priority. Only 41% approve of his immigration policies.
Maybe somewhere Arnold Schwarzenegger is holding a prayer service for trump the frumpy's precipitous ratings dive. Arnold, ask folks to pray for America, for that matter for the world.

a thing of beauty 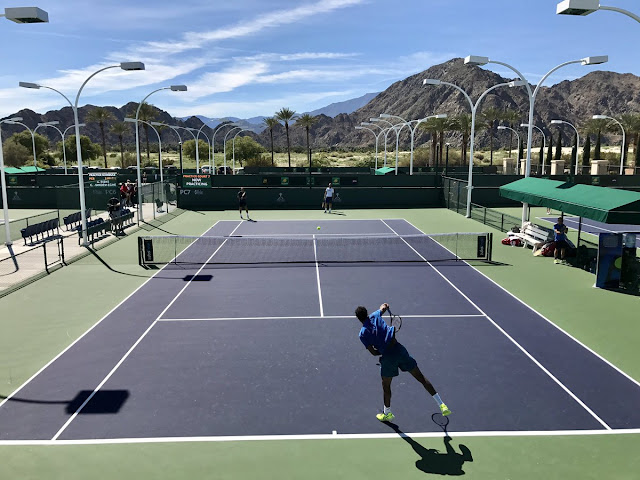 Photo courtesy of Indian Wells Tennis Garden
Much of the sports world is focused on the beginning of the big dance, the NCAA Mens Basketball Championship. I'm certainly a fan as well, but I'm a tennis enthusiast too and the BNP Paribas Open is underway at the beautiful Indian Wells Tennis Garden near Palm Springs. I saw this frame of one of the practice courts and thought it captured the beauty of tennis in the desert.  We've enjoyed our visits to Indian Wells but this year we'll be flipping between basketball and tennis on the big screen. Good luck with your brackets.
And good luck Hoosier fans. Sorry Tom Crean didn't work out. He seemed able to recruit well but something just didn't gel. Teams that should have been better or gone further didn't materialize. I know IU Athletic Director Fred Glass and he's a bright and capable man. He and President McRobbie, who is also a good guy, face an important challenge now. And they do so in a hyper aware and active state, where by the way arch rival Purdue and little Butler are enjoying the big dance. Pressure!

See you down the trail.
Posted by Tom Cochrun at 11:00 AM