THE WEEKENDER :) THE KISS 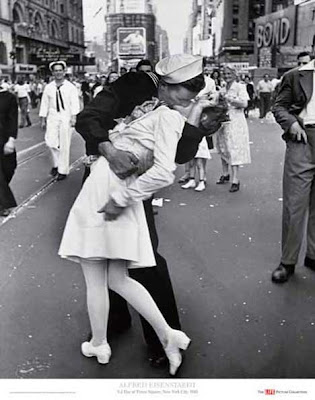 Photo by Alfred Eisenstaedt Life Magazine
It is one of the joyous scenes in the quilt of American History.
Times Square at the end of World War II and an improbable embrace captured by
photographer Alfred Eisenstaedt. For the millions for whom World War II is
something in a history text or file, this picture has relevance.  A moment, a chance, a legacy, and a piece of pop Americana 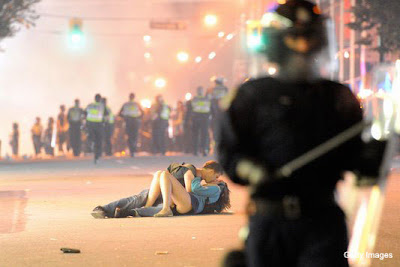 Photo by Rich Lam Getty Images
Then came this.  Spread around the world on web sites, tweeted, and
the focus on enormous social network interest.
Rich Lam captured the image the night Vancouver police confronted rioters after
the locals lost the Stanley Cup to Boston.
I was struck by the early references to the "original kiss photo." It was asked,
could this image become the 21st Century version of the Times Square kiss?
Sad if that is so.
It is a dramatic image.  As a journalist and news manager I would have
been grateful if one of my shooters had captured the image.
But a kiss in the jubilation of the end of a world war is a
far different moment than what appears to be a passionate moment
in the midst of violence.
Both are extraordinary images, capturing dramatic moments, but the
mitigating circumstances put the former and the latter into different
levels of significance.
Still there is a curiosity.
It took years to identify the nurse as Edith Shain, who lived to be 91. The sailor was just a guy in Times Squares who had reason to celebrate.  His identity has never
been learned.
And as perhaps you have noted on this blog there has been the ongoing revealing of the particulars of the
"Vancouver Kissing Couple."
There is a new video that now seems to verify the explanation that it was not a moment of
passion, rather a boyfriend coming to the aid of his girl friend who had been
clubbed by a Vancouver riot cop.
And we've always thought
"a kiss is just a kiss..."
Kiss someone this weekend.
Ignore the cameras.
See you down the trail