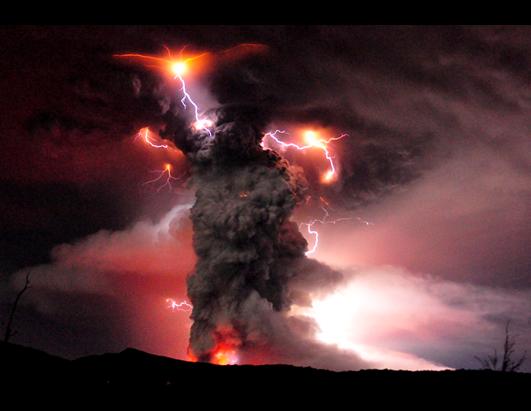 Photo by Daniel Basualto/EPA
The photo capture of Chile's Puyehue Volcano at that precise moment expresses extraordinary power.  It evokes an ominous sense.
My sense of life and the world changed profoundly as I stood on the lip of a volcano caldera.  The ground shook, a noise like a jet engine surrounded me and Donald Swanson of the USGS, and we were rapidly enshrouded in a thick, dark cloud of acrid sulfurous
gas, much like the cloud above.  I knew in that moment that Mother Earth was alive and still cooking.  Power and forces larger than human scale remain at work on and in this planet.
HUMAN ERUPTIONS 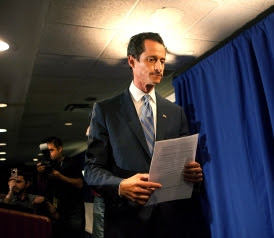 Photo by Andrew Burton/Getty Images
DO WE HAVE TO GO TO WEINER WORLD?

After this you may wish to write me off as a Luddite or a "church lady" style moralist.
Even the idea of cyber sex is stupid, sad and probably forgivable only for a teen suddenly ripped with hormones, strange new feelings and a computer or smart phone. For a public official it is idiotic!
First sexual intimacy should be intimate, as behavior of and for consenting people in the same room.  Anything involving a computer, phone, pad or transmitted by a camera or long distance can not be complete and seems to me it would be singularly unsatisfying.  Anything without human touch is not intimate, and seems to me without pleasure.
I suppose kids, or congressmen, who do "sexting" consider me old fashioned.
Well my dears if sexting is what does it for you, you don't know what you're missing.
My attitudes aside, I am dumbfounded by why any one in a position of influence, and subject to the whims of voters, would play such stupid games.  Sex and politics is an old story and as a journalist I know it happens.  But as a journalist I often wonder why have we-the media and it's consuming audience-become so fixated on stories of sexual
dalliance.  I've spent enough time abroad to know that Europeans think Americans have a real hang up.  I understand that if a man or woman of power gets exposed in a sexual scandal there is some obligation to examine it.  But we have in recent time crossed from a
powerful man bedding someone other than his mate, to goof balls sending pictures of themselves to fantasy lovers via cyber space.  Can't they at least have the common decency to do the real thing?  Or maybe even better, adhere to a code of behavior that we old fashioned sorts would call honor. You ought to know that an honorable person can still "get lucky" to coin another old fashioned phrase.
SPEAKING OF COINS
Do you know about Bit Coins?  While in the previous section I may not be hip enough to understand cyber sex, here I am certainly not tech savvy enough to figure how to do the mining.  But the idea of a unregulated, non government, cyber currency is an intriguing topic.  Especially in light of the "Arab Spring" and the power of social networks to mobilize political action.  You may have to noodle on this for a while.
Of all of this post, I remain moved and fascinated by the Chilean Volcano and Daniel Basualto's remarkable photo.
See you down the trail.
Posted by Tom Cochrun at 2:02 PM