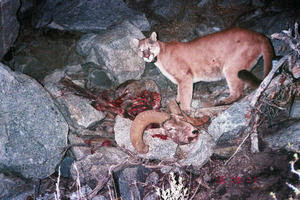 Photo by California Department of Fish and Game
The graphic scene from high in the Eastern Sierra near Rovana illustrates
the centerpiece of an ongoing wild life management debate.
Should big mountain cats, mountain lions, some call them cougars,
be killed to protect the endangered Sierra Nevada Bighorn Sheep?
Wildlife experts say there are maybe 400 Sierra Nevada Bighorn Sheep. They say
at most, there probably has never been more than 1000.  When they were federally
listed as endangered in 1999, the number was down to 114.
The Sierra Nevada Bighorns are a relative to the more common Desert Bighorns with their rounded horns, the type used on Ram trucks and by the football team. 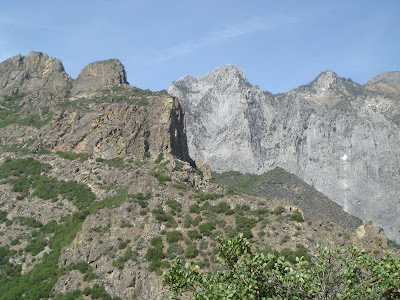 The alpine Eastern Sierra is vast, rugged and a harsh environment.
The Associated Press reports 23 mountain lions have been killed by trappers in the
last ten years.  There are said to be some 5,000 Mountain Lions in the region. The AP says the cats have eaten at least 59 sheep. In the same ten years 1,079 mountain lions have been killed for threatening livestock or pets.
THE NUMBERS
5,000 Mountain Lions
400 Sierra Nevada Bighorn Sheep
Passions run on both sides of the kill issue.
For the time being the lions can be killed only  if
they are proven to have killed a sheep.  Of course a
lot can happen in the wild that goes beyond monitoring.
DAY BOOK
HAPPY COWS
as the commercial says
"California Cows are Happy Cows." 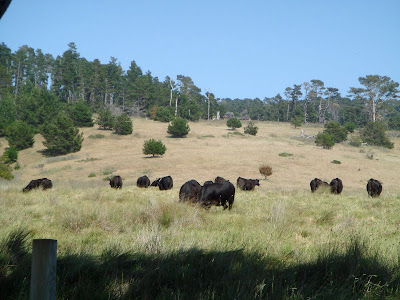 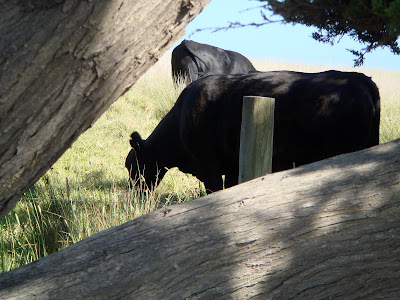 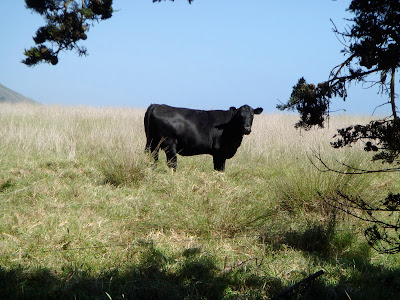 See you down the trail.
Posted by Tom Cochrun at 11:54 AM