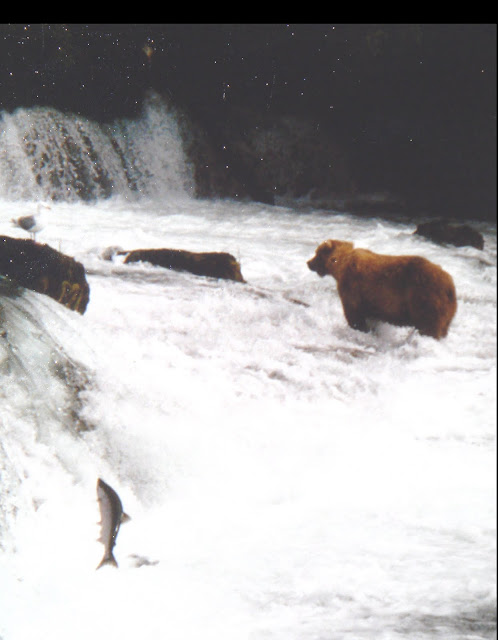 By the time I snapped this shot at Brooks Falls in Katmai in Alaska, I already had a fascination with bears.  The Grizzly Bear, pictured in these shots, is a ferocious beast and can be a man killer.  Still, I've always thought of bears as a sort of super steroid sized dog.
I know that's not the case, but their loping amble almost seems playful.
I suspect the image of bears was set in me back with the old Brer' Bear character in the Joel Chandler SONG OF THE SOUTH literature of the Uncle Remus stories.  The Disney
version painted Brer Bear as slow, somewhat dimwitted and always being tricked by Brer Rabbit. 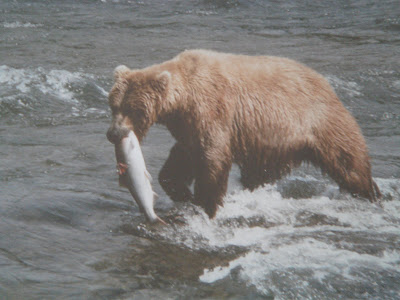 Living in the west, you learn to live with the reality of Bears.  We've had bear sightings within a couple miles of our home.  We have hiked into brown bear country in the Sierra.  Bear lockers are something we frequently use and we always observe the no food in the car admonition in certain areas.
What we think of as the California Golden Bear is really a type of brown bear.
They are less lethal than the Grizzly, the bear on the California Republic state flag. Ironically the Grizzly is probably extinct in the state.
However, interaction between bear and society is problematic, even in mostly wild, pastoral, agricultural  or undeveloped San Luis Obispo County. A local bear that has developed a taste for chicken, is now on a hit list.  The term we use out here is a "depredation permit."  That's a lyric Uncle Remus never sang about.
The bear/community interaction has been lethal. Link here for the San Luis Obispo Tribune story of the bear kill.
Read abut the background of the story by  linking here to the San Luis Obispo Tribune.
Enjoy seeing the Big Grizz in their natural environment. 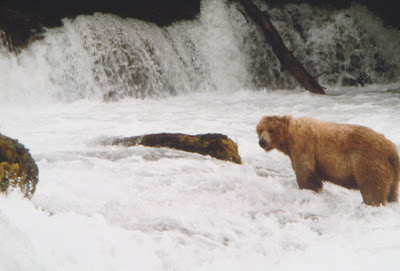 Do you figure this gull has any idea of who he may be trying to steal a fish from? 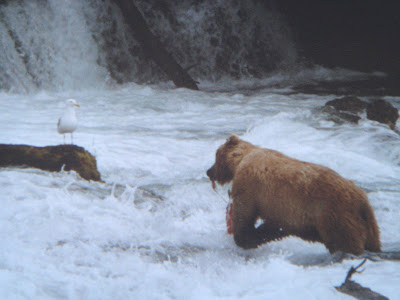 Katmai National Preserve and Park in southern Alaska, in the area of the 10 thousand smokes is an extraordinary place. Not only can you observe Grizzlies in the wild, you are also in one of the most active volcanic regions in the world thus the name-The Land of the 10 Thousand Smokes.
See you down the trail.
Posted by Tom Cochrun at 10:34 AM