OF PRINT, LEGACY PRINT AND THE HILL PROJECT 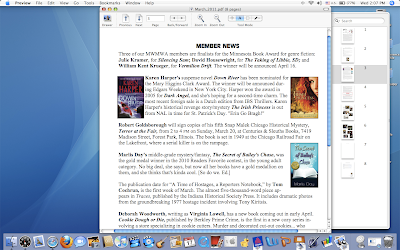 Even after all of these years and countless articles and mentions, it is still good for the self esteem to see a little blip about yourself.  The page above is from the Mystery Writers of America Mid-west Chapter CLUES.  Since few of our eyes are good enough to read the page capture:
The publication date for “A Time of Hostages, a Reporters Notebook,” by Tom
Cochrun, is the first week of March. The almost five-thousand-word piece ap-
pears in Traces, published by the Indiana Historical Society Press. It includes dramatic photos
from the groundbreaking 1977 hostage incident involving Tony Kiritsis.
There is nothing like seeing it in print, no matter what it is.  Which leads to the idea expressed by David Carr, the New York Times columnist and writer, who says the new world of tablets will be both a future for existing legacy print news organizations but a moment of opportunity for new players.
Carr told Charlie Rose that a serious news group could enter the field and challenge existing legacy news papers with an investment of $25 Million.  That seems like a lot, but I managed news organizations in a single market with a $6-7 Million dollar operating budget.
You can do serious and extensive news gathering and dissemination with that kind of money and avoid the legacy costs of newsprint, fleets of trucks and all the attendant labor and operating costs.
Years ago I presented at an international forum on the future of news and suggested that new generations of computers would replace print as the preferred delivery channel for readers and that modern newspapers on line would resemble television news. That was before the tablets, which now make presentation and style even more brilliant, simple and user friendly.
To come full circle here.  I am old fashioned enough to delight in pouring over my local newspaper while savoring a cup of hot chocolate.  It is a ritual that seems ultimately civilized. I still even "clip" articles and save or send them.  HOWEVER, once I've consumed the paper, I move here, to my keyboard and screen and continue to read, and clip and send.
So, while my daughters will someday find boxes of old newspaper clippings and articles, this boomer finds the efficiency, range, depth of reach and expanse of the "new print" is exhilarating.  I am however hopeful Carr is also right in saying that there will still be some copies of papers printed, probably in a rich format, that will be available and carried by some.  He adds the post script, they will be carried as special objects with a kind of snob appeal.  Wonder what the old "ink stained wretches" would make of that? 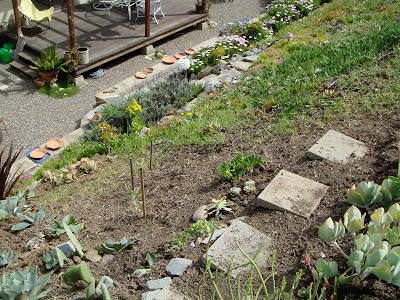 For four years we-mostly Lana-have been working on the steep hill behind our ridge top house.  As you can see there is a formidable incline.
Lana has done a wonderful job of planting, difficult though it may be, and blending with existing ice plant growth. 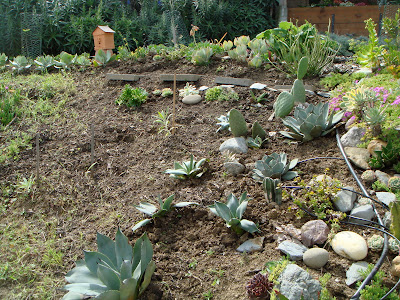 She has started on a new patch, with more succulent plantings.  Consider these the BEFORE shots of the new project. 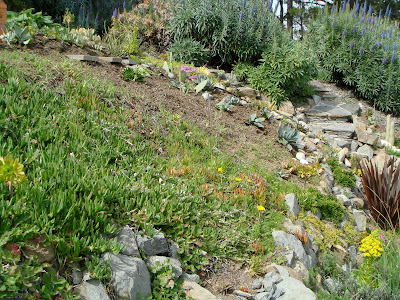 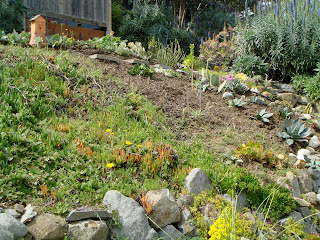 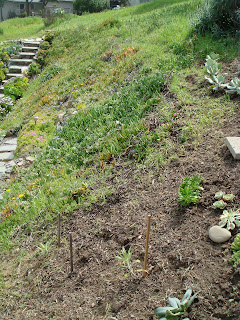 Stay tuned.
See you down the trail.
Posted by Tom Cochrun at 2:42 PM