Left overs here, from meditations while face down on an acupuncture table. Nothing is as simple as it used to be.
The needles were set, some were wired, the ethereally peaceful music tranquilized my inner savage and it all created a sense that my being was on an infundibuliform* journey to some place deep and profound. More than sleep, something aspiring to full out bliss. It's that elusive place where certain things in life can place you and where one can, pretend at least, to achieve a kind of clarity. So, here we go.

the O factor
Oprah is an extraordinary person. Enormously talented she has created a cultural empire. Interviewer, host, actress, business executive, visionary and social force. She is brilliant in all of those roles and she may well be a very good person.
She speaks with passion and those who share her views are moved and inspired and those who don't cannot ignore her. But no matter any of that, it doesn't mean she should run for President.
Even if she could win, she should not run. I hear some of my liberal friends or Democrats beginning to groan, and maybe even taking me off their invitation lists. She should not run, because even if she is only a notch below sainthood, she is not qualified.
Yes, she is smart, powerful, influential, and beloved but she has no experience in that special arena in America we call governance.
The embarrassing and unfit present occupant of the White House is a case in point. There were voters, and there still are, who thought his so called business experience was enough. If that were true why does almost 70% of all US citizens disprove of him and the job he's done? Why do our allies worry about his lack of skill, intelligence and his loutish behavior?
I'm not beginning to say Oprah would behave like the idiot to whom I referred, but there is a world of difference between what you can do in private business and life and what it takes to be the "leader of the free world." (That position by the way is presently occupied by Angela Merkel-It used to be the American President).
There was a phrase we once used-a Statesman-modified to contemporary vocabulary a Statesperson. It connoted something of quality, intelligence, and even integrity of action and purpose. To qualify for that moniker is what qualifies someone for the role of being the Chief Executive and Commander in Chief. You need to prove your mettle in the hard, hard world of political experience, decision making, earning and maintaining trust, understanding the thrusts of history, the forces of a world with millions of moving parts, intelligence, security, economics,and the common good.
Oprah, in my opinion, is an exemplary woman but she doesn't have what it takes to be President, nor does Dwayne Johnson, or Mark Cuban, or Mark Zuckerberg, or George Clooney or Kid Rock.
If any of them are serious, then they should run for office, House, Senate or a Governorship, or see if they qualify for a  challenging diplomatic assignment. Then and only then should this nation consider their candidacies.
We may be sick of politics as normal, sick of those who have occupied the stage the last 20 years, we may not like the options for 2020, but reverting into another "cult of personality" candidate will only take us further down the rabbit hole.
We the voters need to demand change in the ways of the House and Senate and the influence of big money and the beltway bandits that former a President warned us about. Ike had no political experience, but his leadership as Supreme Commander in World War II was as hard a training ground as ever. We have failed to heed his warning.
We don't need personality, with big social media influence, we need those kind of integrity and old fashioned political practices-compromise, negotiation and especially experience with reality instead of ideology. We certainly don't need another entertainer in chief, even if the ratings and popularity would be a natural improvement. Change the system, not the channel. We need a real leader, not a star.

it's not good for all 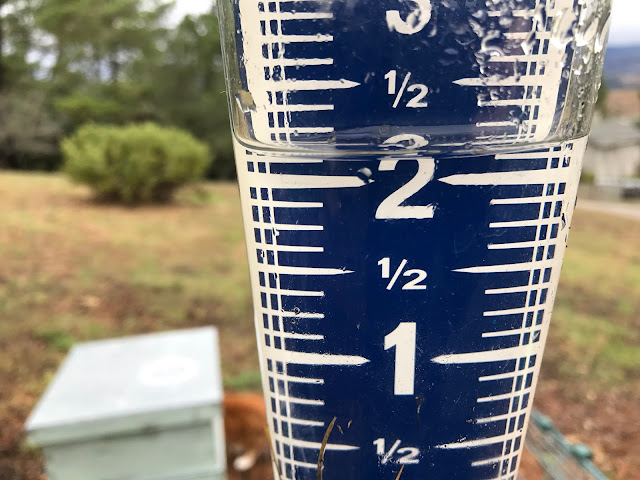 We were delighted with the recent rain that swept the California Central Coast. It gave Lana the impetus to get the fava bean bed planted. (Frequent readers may recall our ecstatic love of favas) 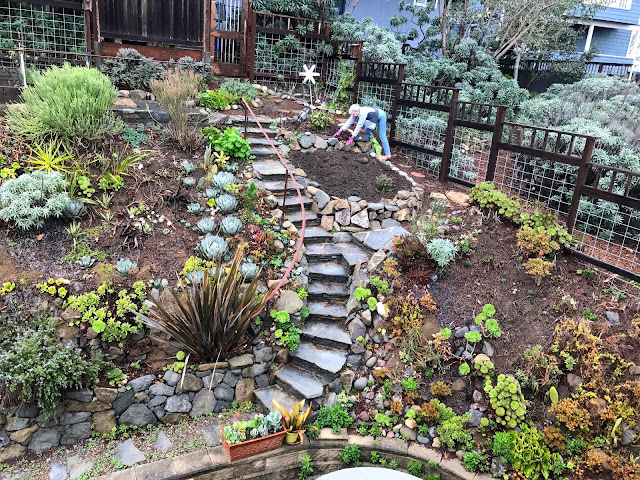 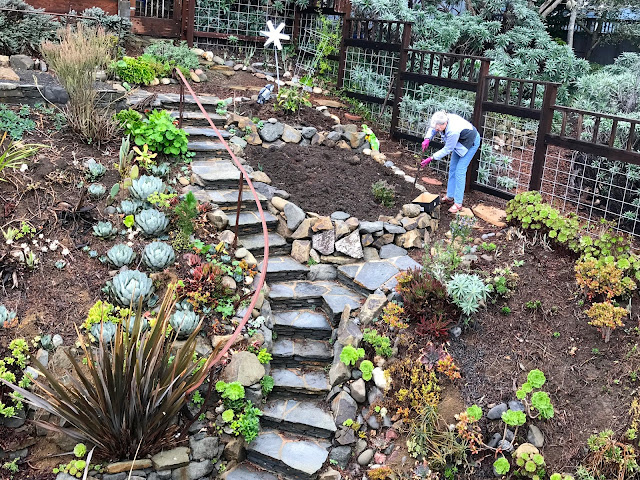 But that same rain was devastating just a couple of hours south of us, 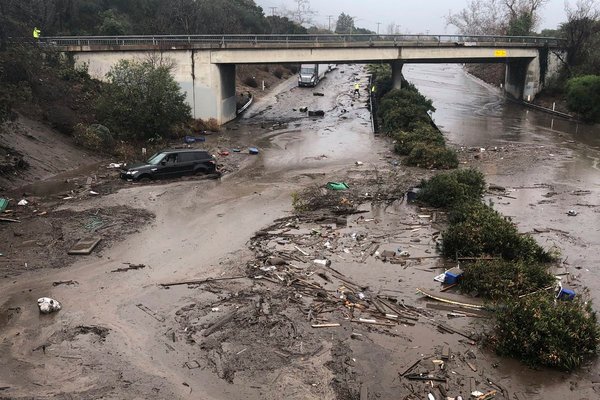 I can't count the number of times we have driven under this over pass on the 101 near Montecito. 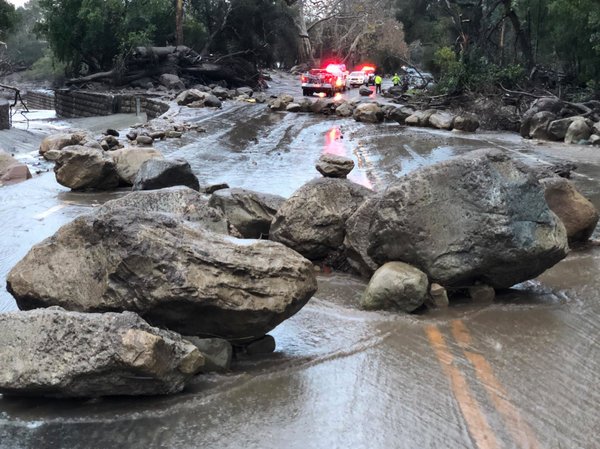 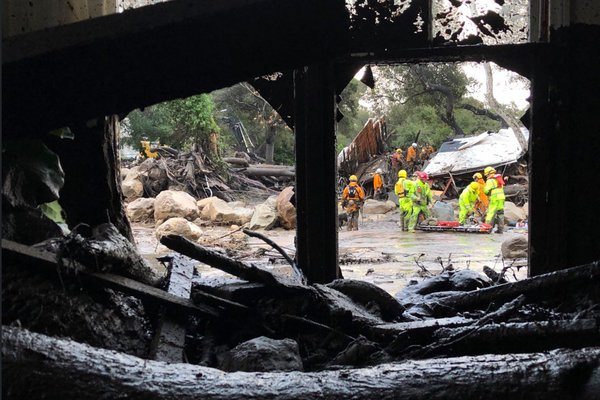 Our heart aches for those who endured the Thomas Fire and now suffer through mud slides, more devastation and loss of life. 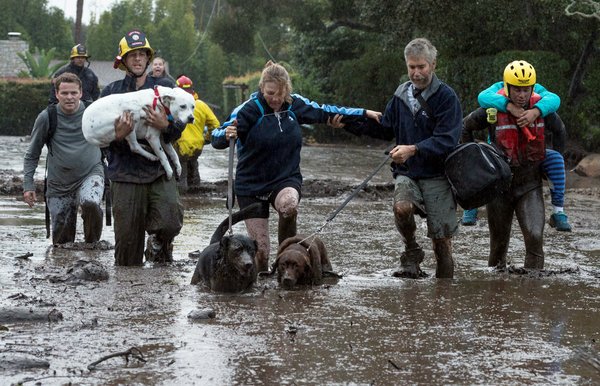 And so indeed life is messy and complicated and a series of one moment after another. When we are fortunate and the moment is good we can celebrate and appreciate and be grateful. We can also know somewhere, in their own moment others may be afflicted, suffering and longing for a better moment.
It is complicated being a human being.

See you down the trail.
Posted by Tom Cochrun at 4:09 PM