NIGHT LIGHTS
Has how Memorial Day resonates with you changed over the years?

Iris and peonies, cut and given tender care by a great aunt and the Sid Collins radio broadcast of the Indianapolis 500 are the earliest vivid impressions. Now the sensors gather something quite different. It's evolved.
In those early fragments my parent's mood was out of the norm. That dad was driving my Grandmother, his mom, and her sister to cemeteries was odd enough. That he and mom "worried" about flowers and managing a couple of older women brought an additional tension. A different kind of purpose to a day was in the air.
And after all, it was a day about those who were gone and those who served. Radiating lines of white crosses,  placing those cut flowers and my great aunt speaking of "mamma." It all was serious, if not somber and seemed to be part of something that went back beyond my knowing.
By now Memorial Day pondering is a space of gratitude, as well. This year I remember those who have served as "Nightlights." 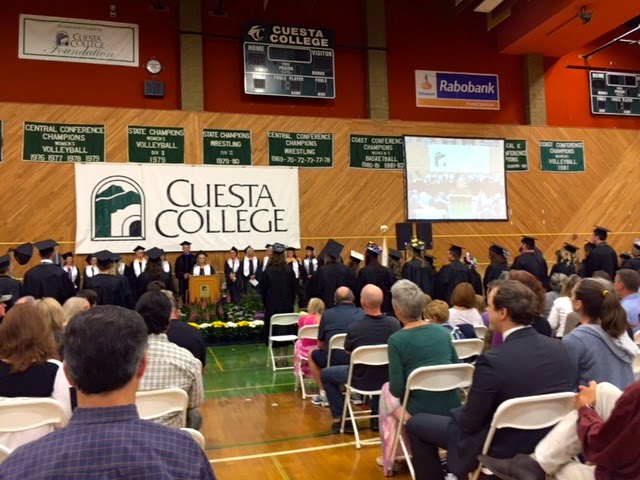 "Nightlights" was the analogy Linda Harris relayed to the audience at Cuesta College but specifically to the 40 people who had completed two years of intensive training and the learning of medical skills. Those 40 were about to be "pinned," the post graduation tradition to being an RN, like Florence Nightingale who Harris had social media morphed to "Nightlights."  The "Nighlights" mean comfort, support, help and treatment in pain, suffering and all manner of medical need from birth to death.
One of the graduate statements was especially close to my heart. Katherine, our junior daughter was commencing with 39 others. I expect they all will be special. The "Nurse Culture" with clear headed and skilled compassion is an attitude with an history of service.
'Angels of mercy' a friend said about Katherine, her classmates, her colleagues to be and those who preceded them at bedsides, in war zones, epidemics, disasters, birthing rooms, hospitals and slums for generations. 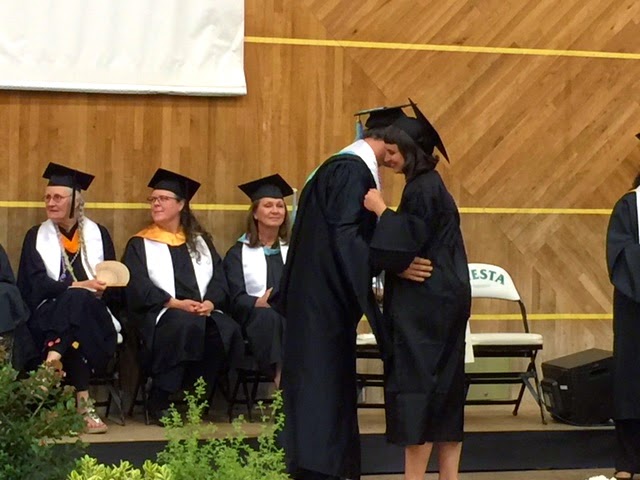 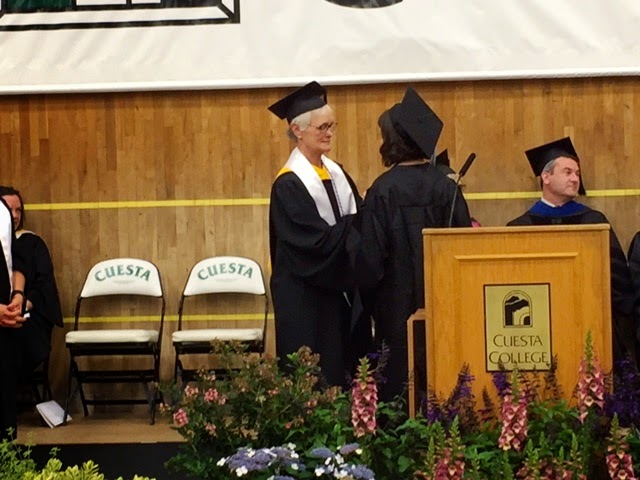 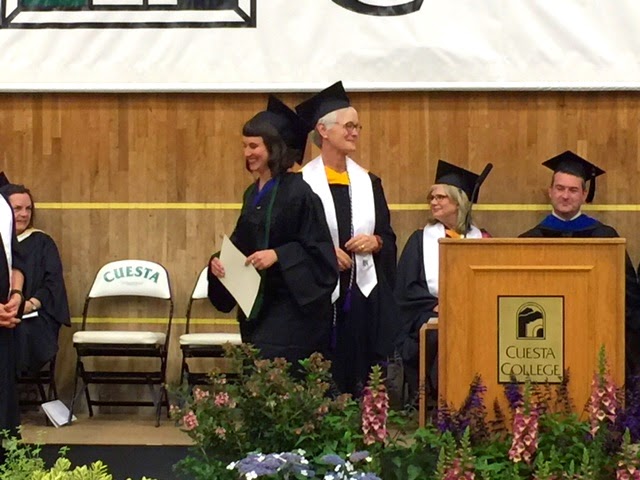 That smile is joy at completing school and long hours of study, rotations and labs.
The warmth of heart that comes with being a proud parent is also joy and a blessing without equal, even with pounding heart and moist eyes.
So my Memorial mediation this year starts with a gratitude for the wonderful devotion and caring that is Nursing and for those who make it real and who have done so during all of our lives and for many before us.
It's a new adventure that awaits the young peers. I wish them all well. The rest of us will be better off because they choose to live lives of service as RNs.
FLOWERS FOR ALL WHO SERVE 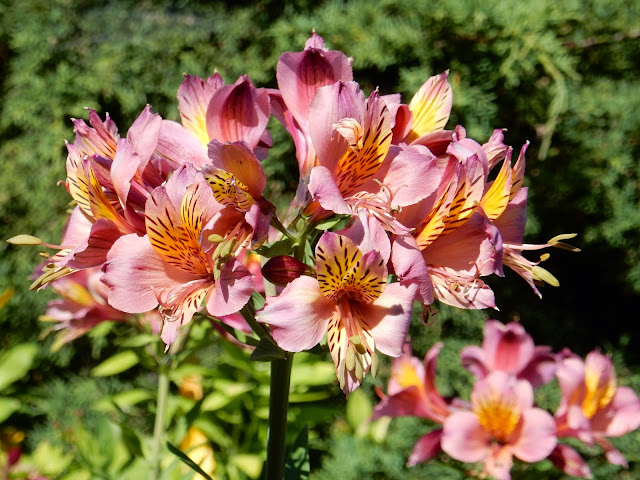 FAR FROM
Thomas Hardy's classic Far From the Madding Crowd is nicely handled in the new release and comes in at about two hours, but they are a rich two hours. (The 1967 version seemed to be a bit long as it approached three hours though one scene remains vivid.)
Carey Mulligan, Matthias Schoenaerts and Michael Sheen turn in marvelous performances. I had not seen Schoenaerts previously, but his Gabriel Oak is a masterful portrayal. Mulligan has a special quality that is tough, coy and vulnerable all at once.
I believe a major factor in the pace of the 2015 version, directed by the Dane Thomas Vinterberg is the superb job of editing done by Claire Simpson, maybe one of the best ever. It helped move a long and intricate 18th century romance, written with flourish and detail into a solid entertainment for 21st Century sensitivities.
Expectations were vastly different when the great director John Schlesinger produced his 1967 work. Though long he got good performances from Julie Christie, Alan Bates, Peter Finch and Terrence Stamp. The sword scene in Schlesinger's version turned with a bit more of an erotic take. That could have been Julie Christie and ambient hormones of the 1960's or so I recall, vaguely now.
The latest release is entertaining, rich and reminds us of how well written and told novels can be. 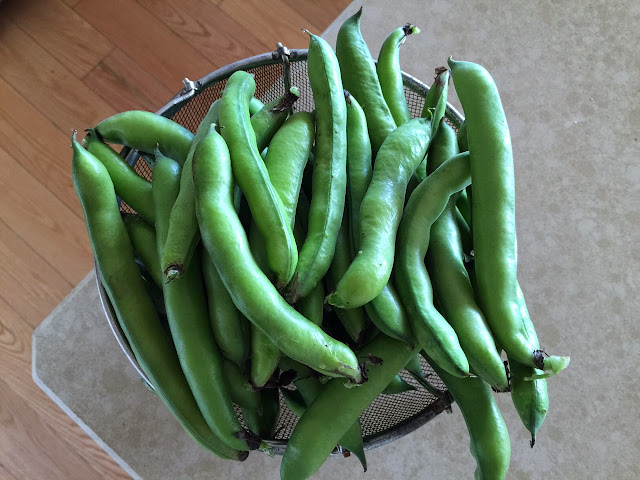 The first batch of our beloved Fava beans. 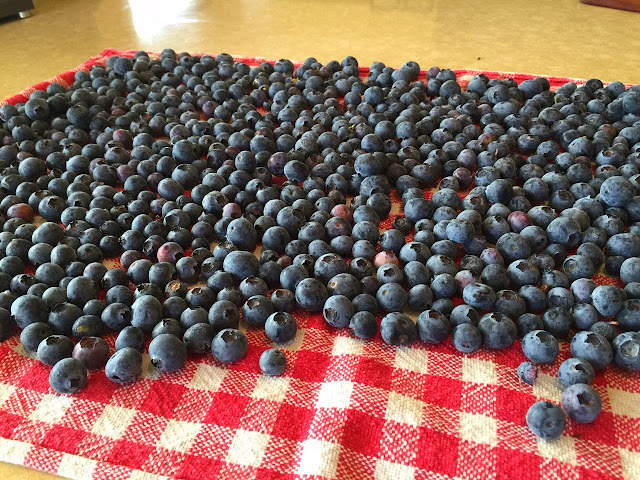 A take home bonus after a morning of "gleaning" for a homeless shelter. Thanks Lana.