NOTHING OFF LIMITS
prickly yes-pampered no 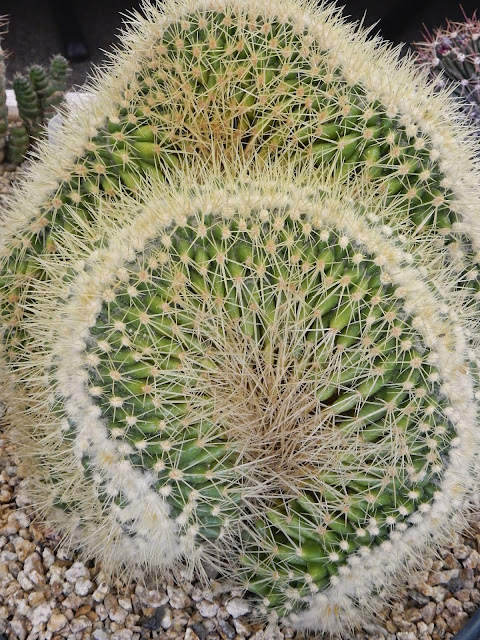 Considering matters of intellectual and academic freedom, we start with a related anecdote.
The Governor was growing increasingly angry. He was upset with the questions and unhappy being on camera.
He told me I should not ask him again. I did. He said I was out of line and if I did not stop he would leave. I asked again. He stood up and started to bolt for the door. The lavaliere microphone, still attached to his tie, caused him to jerk back at the end of the tether.
"You'll ruin that nice tie Governor. Why don't you cool off, sit down and answer the questions?" I said as photographer Steve removed the camera from the tripod and walked toward the Governor, tape rolling.
"You cannot treat me this way! I am the governor."
He glared at Steve now zoomed in on him. "Is that camera on?" he barked.
"Yes it is. You are loosing your cool. Why don't you just answer the question?" I asked again.
"I order you to turn off that camera," he pointed furiously, now free from the mic. "Do you hear me?"
"Governor, you can't order us to turn off the camera. We just want you to answer our questions."
"I order you as the governor to turn that camera off."
There was more exchange as he and an aid bolted through our conference room door and started down the hall, Steve and I in pursuit, camera on. He was yelling I couldn't treat him that way, he was the governor.
As he bounded down the stairs toward our lobby he boomed we could never use the video on the air. I said that since he was an elected official we could ask him "any thing, anytime, anywhere."
And that's the point. More in a moment after a final word on the furor. It blew up a storm of controversy and news coverage from other media. The confrontation was on a Friday evening.  On Monday morning the State Board of Accounts sent an Auditor to the television station for an unscheduled audit and investigation.
I was reporting a story on how state supreme court justices were selected and the influence the governor had. It was not an unfair or unnecessary question, but that is another matter.
In our democratic republic freedom of speech is a foundational right. To that end all of us should be able to speak and inquire freely. I hold to the idea that if someone is elected to represent the public interest they are indeed on notice to answer any question anywhere. They're paid by taxpayer dollars so any taxpayer, they need not be a reporter with a camera, can ask and should expect an answer to their question.
Extending that premise, such rights and extension of free speech should certainly apply at state schools. In fact nothing should be off limits in academia, even that which some might consider offensive, if for no other reason than others might not consider it offensive. There is a better reason. It's not the tone or offensive nature of something that matters-what matters is the very nature of intellectual inquiry which must be free and unbounded. It is troubling that Universities have sought to soften the hard nature of inquiry by limiting what can be discussed or by requiring warnings. Please permit me a couple of legacy expressions, "poppycock and balderdash!"
The University of Chicago is praised for leading the way to how it should be in academia. The University says it is not right for a school to shield students from opinions or ideas they find disagreeable or even offensive.
Purdue University, led by a former political logician and thaumaturge, also seeks to extend intellectual freedom to consider and study on a broad latitude and there is an encouraging twist in this.
Mitch Daniels as a Governor criticized Howard Zinn's A Peoples History of the United States. As a University President he probably hasn't changed his opinion, but understands academic polemics is different than political conjuring. In the world of study all ideas have a seat at the table and they survive or perish based on merit.
It is sophomoric and unsophisticated to satirize or mock religious figures and sacred images yet a free society blessed with freedom of expression can tolerate such "offenses" under the guise of creativity. One may be self indulgently outrageous but we draw the line at desecration and destructive or violent behavior. However in the realm of a place for the pursuit of knowledge and understanding, ideas and words exist in a state of pure freedom.
Civility, intellect and knowledge are great stages upon which bad ideas destroy themselves in light and under the preponderant weight of enlightened examination.
And so we may end up with ridicule.


A STUPID CLAIM WE MUST ENDURE
As another case in point, the anti immigration Californians for Population Stabilization has begun a campaign blaming California's drought and water restrictions on immigrants, especially those from Mexico.
Laughable, except those who hold those views walk and drive amongst us. In our arena of free speech and thought they are entitled to their voice and their critics are entitled to calling them stupid.
I wonder if some are not trying to turn the evolution of human intelligence machine to reverse.

EXOTICS
The annual Succulent show in San Luis Obispo brought other worldly sights from the earth. 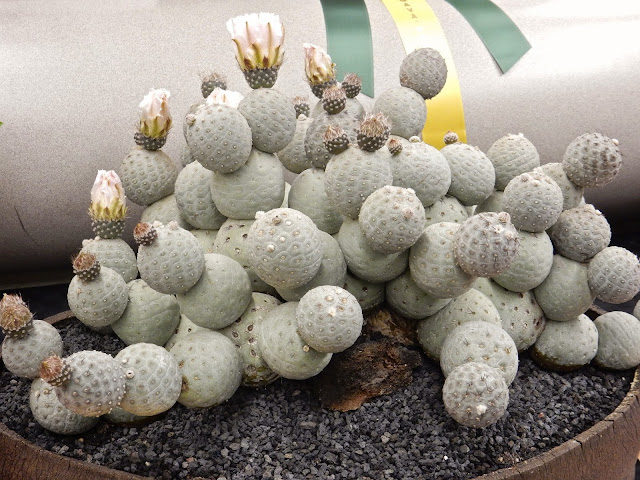 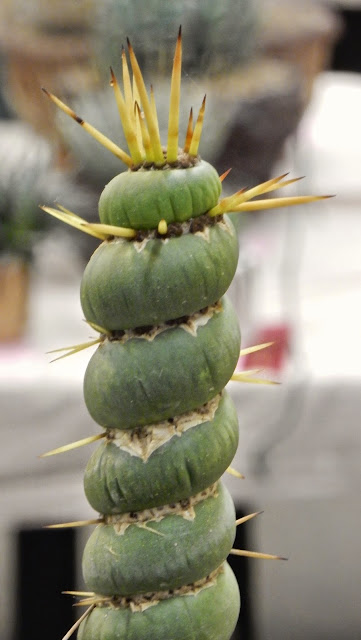 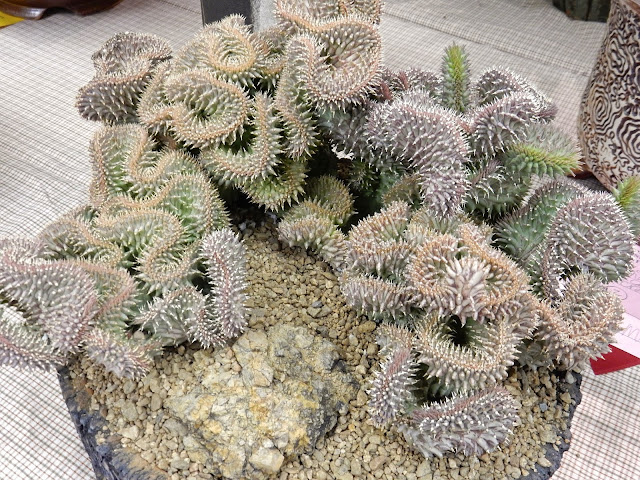 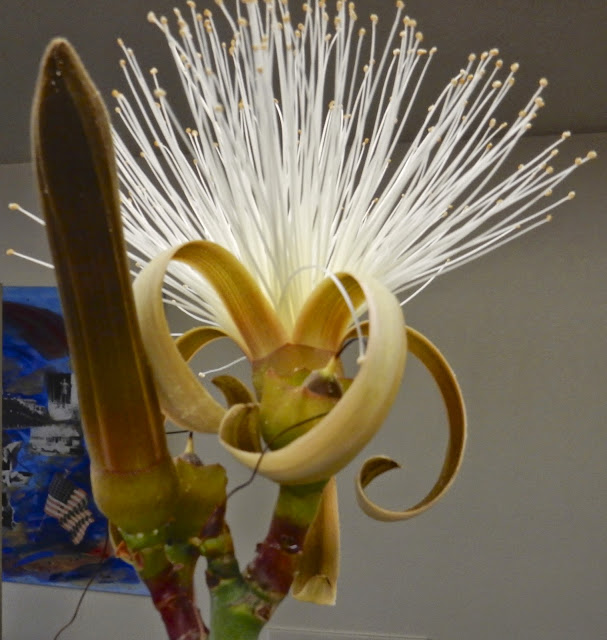 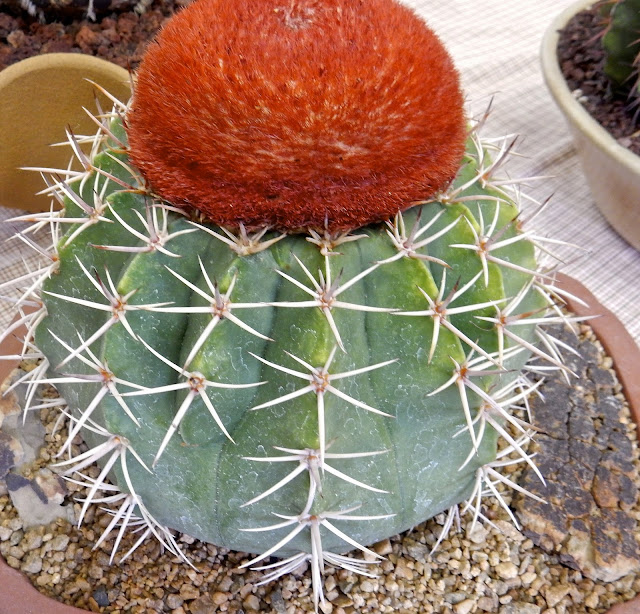 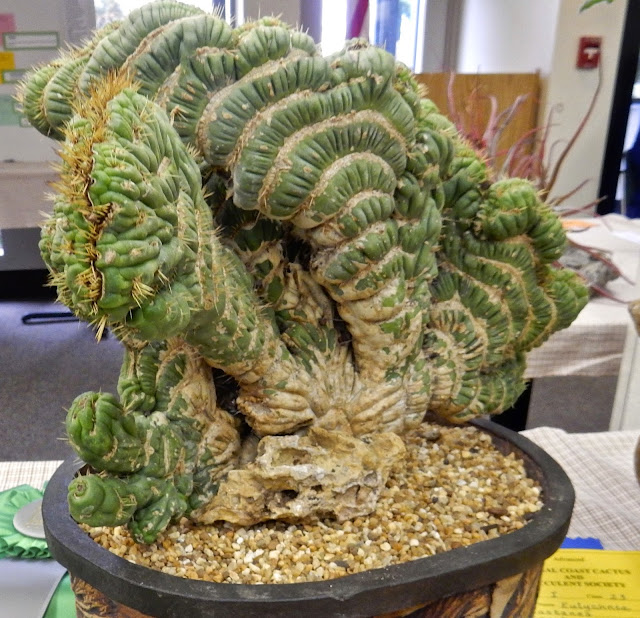 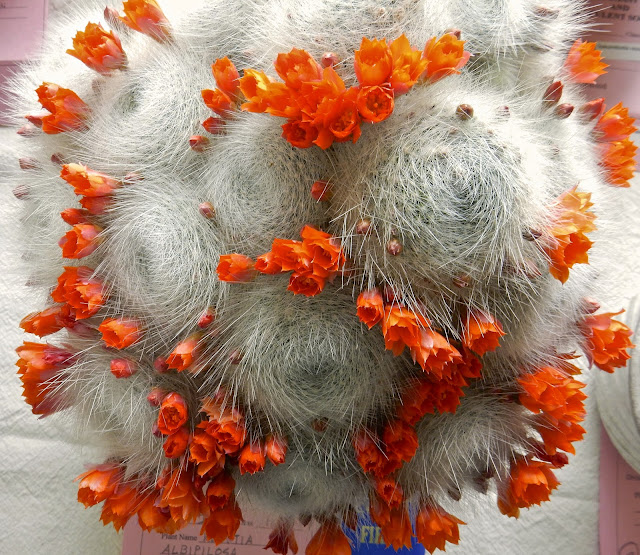 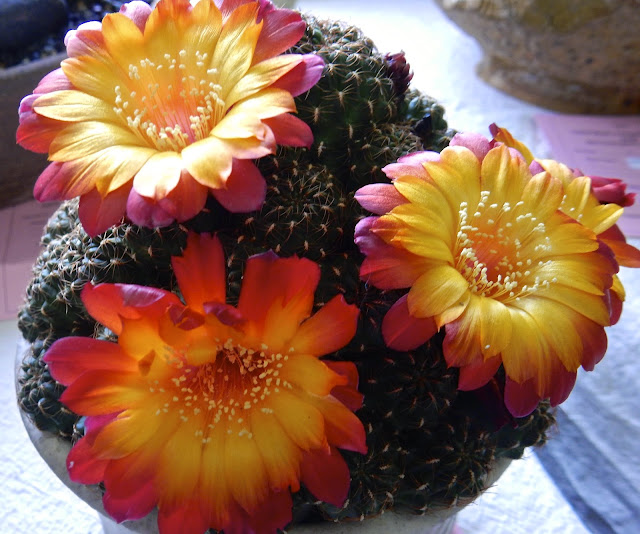 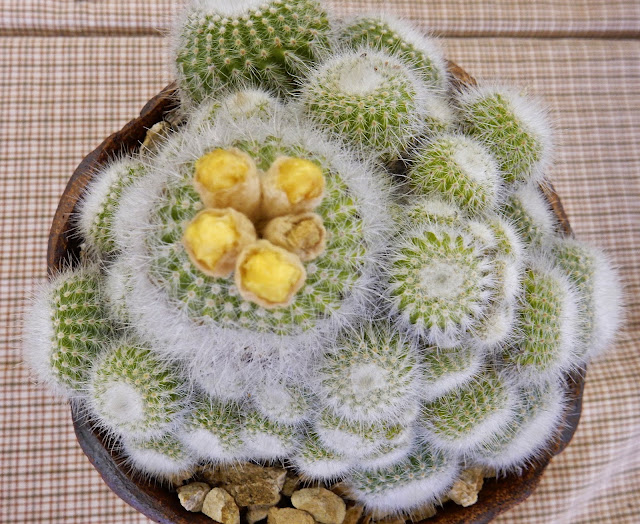 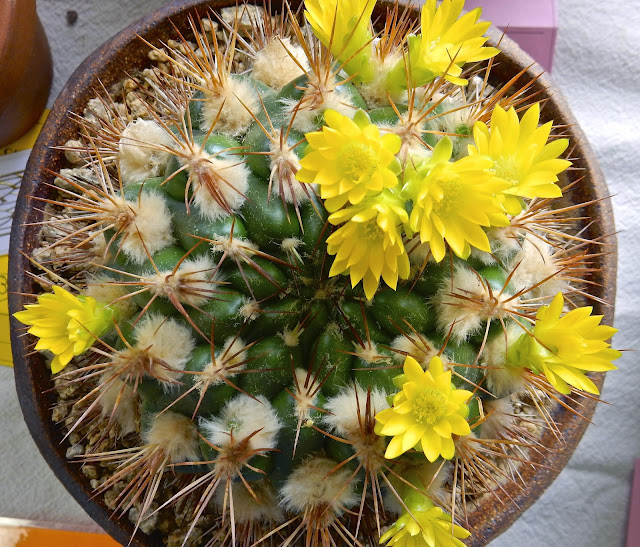 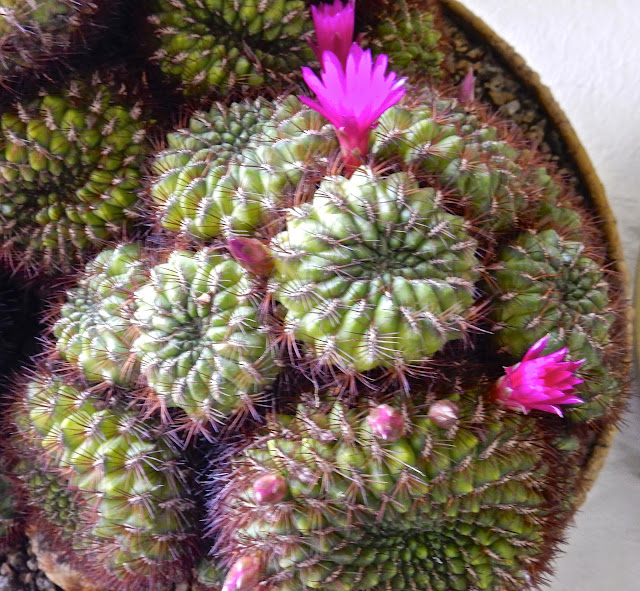 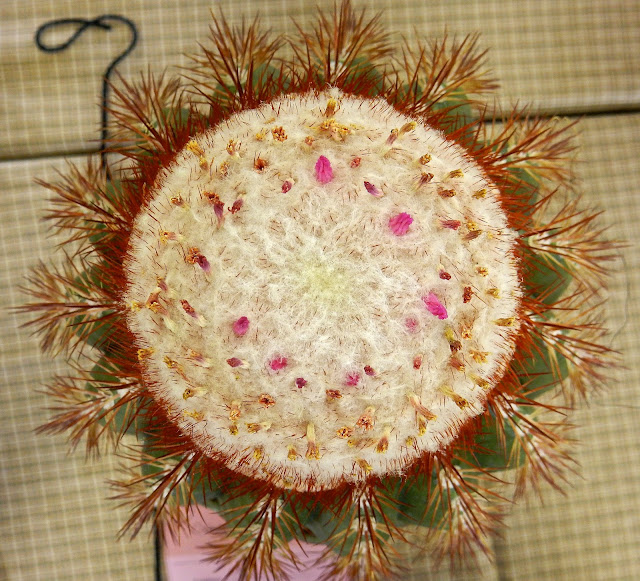 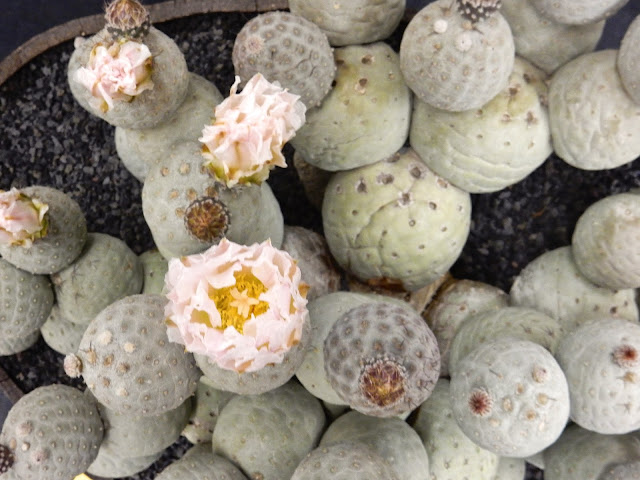 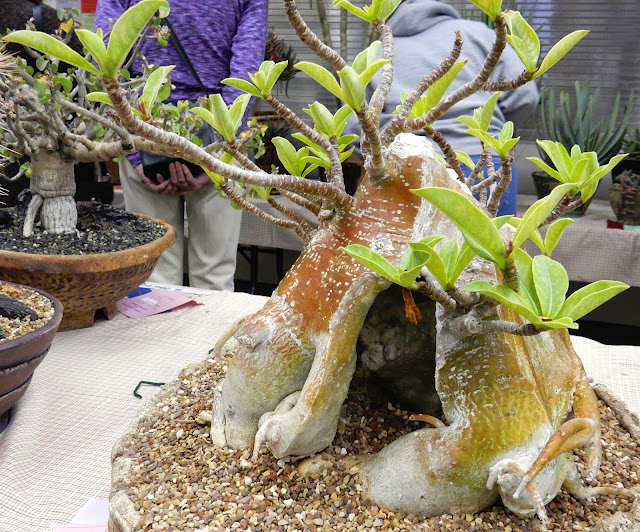 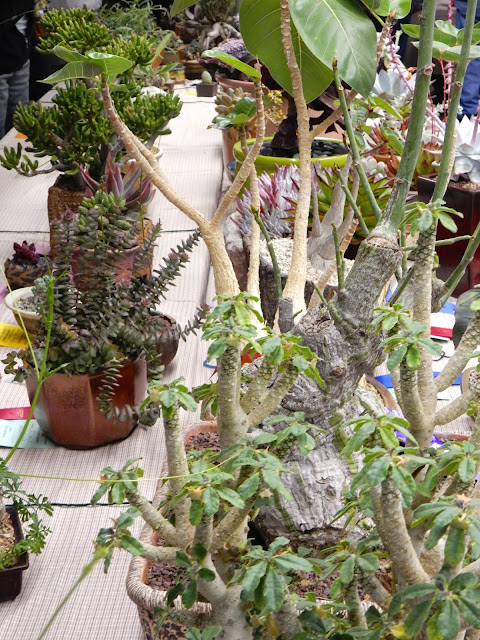 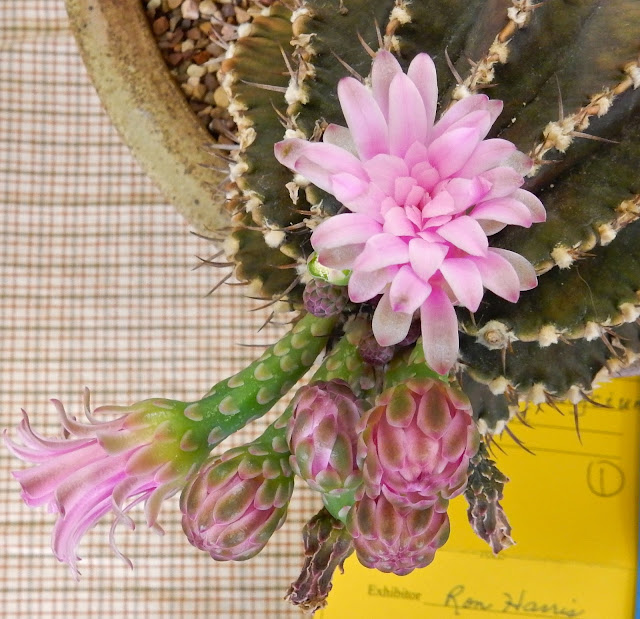 See you down the trail.
Posted by Tom Cochrun at 12:10 PM