GOOD IS GOOD-GREAT IS BETTER and A THROWBACK

ENTERTAINED
AMUSED
MOVED
"I just love films. I have since I was a kid," my friend Troy says sitting on a shaded park bench, near the theatre he and Syrie had departed while Lana and I are on the way to the box office, our third time in three days.  Yea, we love films too.

A MOST WANTED MAN
A masterful John le Carre' intrigue populated by a great cast including another brilliant Phillip Seymour Hoffman portrayal. I mourned this great actor's tragic death seeing him embody the wizened soul of Gunther Bachman, a German counter terrorism spy running the snares of life including bone headed politicians and their sycophants. Hoffman seamlessly weaves a character into life. He gets first class cooperation from Rachel McAdams, Willem Dafoe, Robin Wright and Grigori Dobrygin. The excellent Daniel Bruhl (RUSH, THE FIFTH ESTATE) shines in a supporting role. Wright's performance as a CIA executive is so good you may end up wishing her a bad outcome.
Director Anton Corbijn and screenwriter Andrew Bovell do le Carre' and this great cast a great service. A MOST WANTED MAN is entertaining, with more than a hint of truth.  As an old spy quoted to me-"There's a lot of fiction in truth and a lot of truth in fiction."

I WISH I WAS HERE
Lana and I consider this a great film.  Zach Braff, who gave us Garden State, ups his skill as director, writer and star in this smart, funny, challenging and moving cinema art.
Braff is a clever actor and his co-stars were incredible. Kate Hudson and Mandy Patinkin create roles that will stay with you.  Patinkin as the aging patriarch, and Hudson as Braff's long suffering and supportive wife. Pierce Gagnon is a cute son and Josh Gad as the genius ner-do-well brother displays his great comedic chops as awarded in his Broadway work the Book of Mormon. Young Joey King as daughter Grace can break your heart with just a look. She stole several scenes, and you'll see why.
Some scenes are indelible; Patinkin in a couple of moments not to be disclosed so as to not spoil the plot,  Hudson and Braff's interaction by a washing machine as a couple "rediscovering" each other. Hudson is brilliant here.  And there are precious moments with Braff with his running interior dialogue.
Beside the obvious story line and full screen entertainment there is the lasting truth of coming to understand limits to dreams. It can be tough to come to a realization about goals for a life.  As Braff says "We can't all be the super heroes, some of us are the ones who need to be rescued."
This is another important work from a superbly talented story teller.

AND SO IT GOES
Rob Reiner is another great director and I consider this film as his tribute to a 1940's era romantic comedy, coupled by in this case two Academy Award winners who you just enjoy watching.
Michael Douglas and Diane Keaton could read letters to the editor and light up the screen.  Douglas as a cranky realtor, living next to a fragile and frequently tearful lounge singer Keaton set up plenty of light, though still probing moments that are well crafted by Reiner's talent as a director and humorist.  Reiner himself dons a terrible toupee and makes a supporting appearance as Artie the always smiling but somewhat hapless piano player.
Cute is an appropriate description. There is nothing ponderous, but there are nice reflections on family, forgiveness, finding romance later in life and getting past grief. This is a feel good, date night type film.  And during this summer season Reiner's stunning visual treatment of Connecticut lake country feels like a vacation. 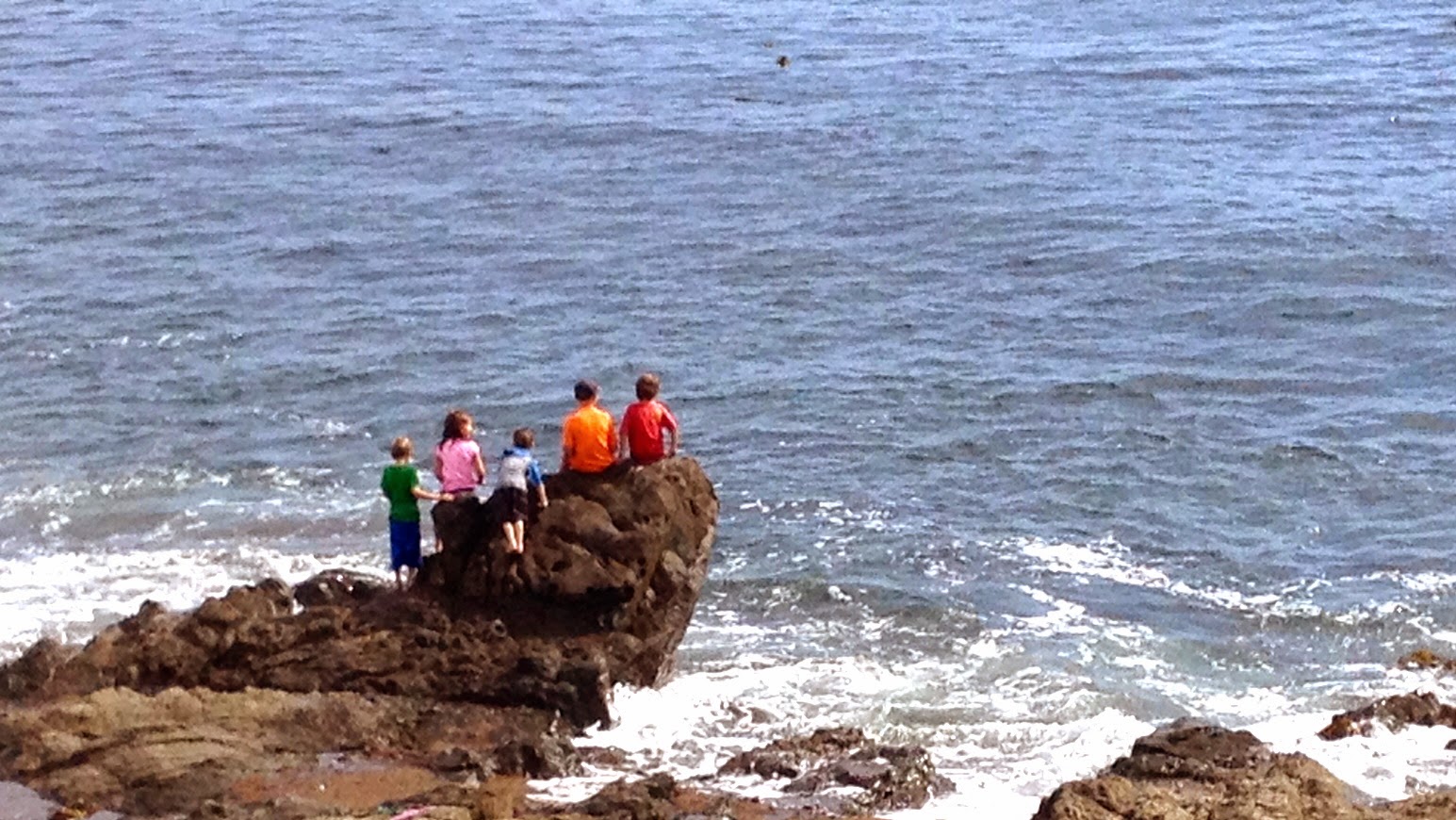 Memories of this visit to the shore will last while.
FILLING THE BAY 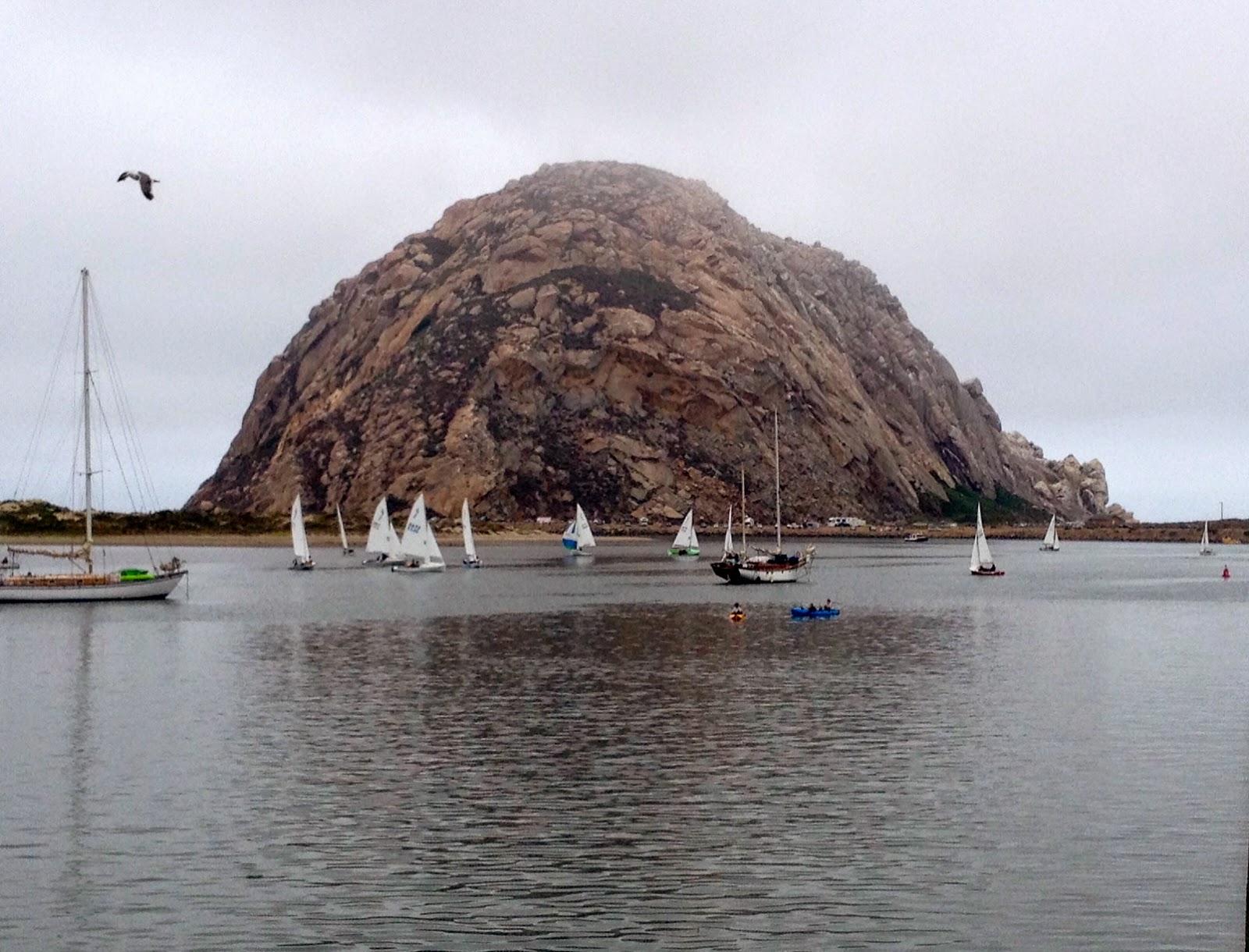 Smooth sailing on this side of Morro Rock, inside the bay.
THROWING IT IN THROWBACK 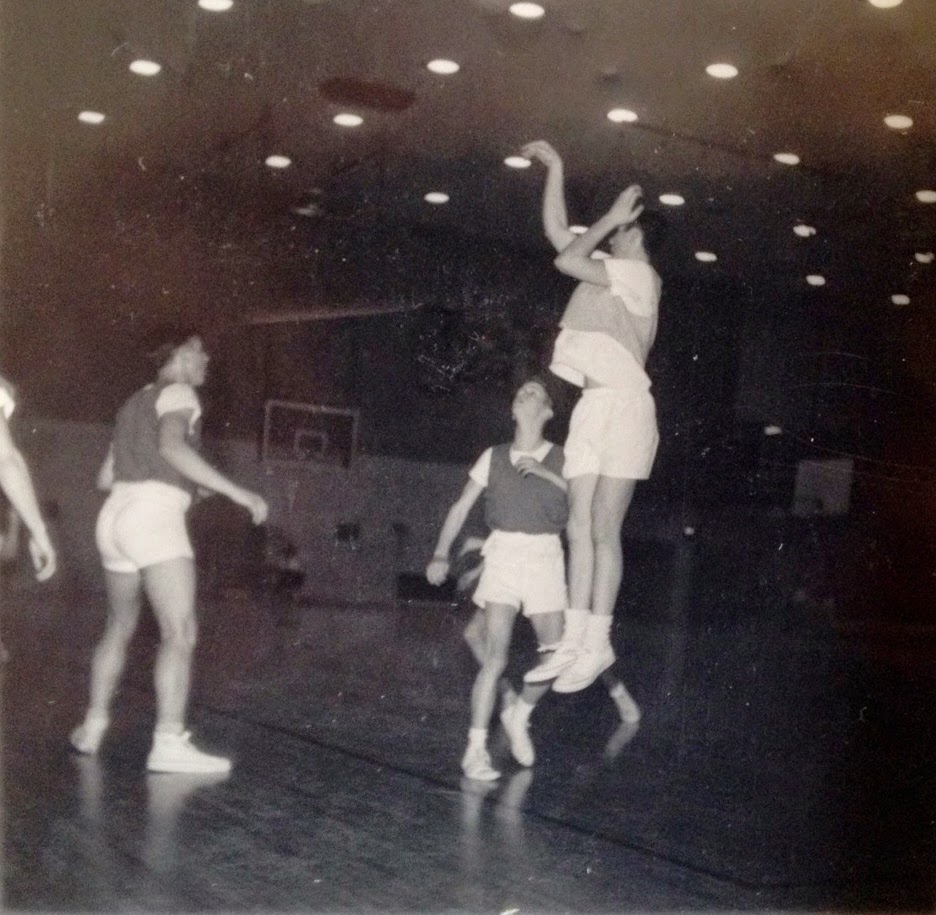 It may have been a few years ago, but once I had a vertical leap! The arms, hand and wrist tell you I have just let go with an outside jump shot.  I'm thinking, "nothing but net!"  Where did that slender hot shot go?  Well, it was 1964.

See you down the trail.
Posted by Tom Cochrun at 3:57 PM