BE NOTHING BUT SERIOUS
As spring deepens and summer nears, more adventure seekers will point toward Death Valley. That is an equation for danger.
It is an extraordinary span of the planet, but you must take it seriously.  You may remember scenes from old westerns where survivors crawl across great expanses of sun baked sand, passing bleached horse or cattle skulls, looking desperately for water.  Well, the inspiration was Death Valley.
We had our own near miss.  As you can see in these series of photos, a blow out put us off to the side of the road and look at the road. 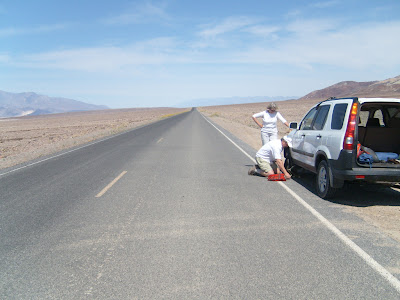 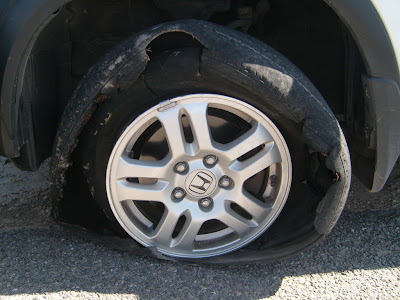 Fortunately it was early enough, so the temperatures were not yet lethal.  We had trouble however.  The last tire rotation was done with an automatic lug bolt tightener, making it impossible to loosen with only the jack handle/lug nut tool. 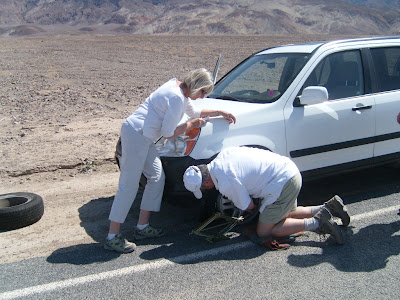 We were traveling with a couple of friends, Jim and Linda, and their presence was comforting, but still of no help.  The nearest semblance of civilization was some 20 miles away, and in Death Valley that is an incredibly long hike.  We were spared that task though by a young man from Chicago.  He wore a Chicago Firefighters T-shirt and while his wife and two young children sat in their car, he opened his tool chest, produced a hammer, a better jack than those provided by the auto maker, and soon he had helped us replace the blown tire and was off on his way. 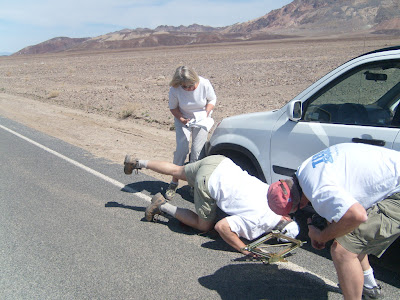 If Death Valley is on your travel agenda, prepare for it.  Make sue your tires are up to the challenge of heat and rough roads.  We thought we had.  I'd suggest a small took kit, a lubricant, patch repair, a hammer or top of the line lug wrench and/or jack. You should travel with plenty of water, food supplies, clothing and/or protection from heat and cold, first aid or medical supplies, make sure someone knows your intended route, and stay on marked roads. It is a remarkable, but forsaken area.  Problems can arise and people experience trouble.  When we drove into the only service station in hundreds of miles, seven other cars drove in or were in line as we purchased a spare.
Every month some one gets into some kind difficulty and some are not so fortunate.

Have a great adventure, but keep in the mind the old scout motto-
"be prepared."
We'll see you down the trail.