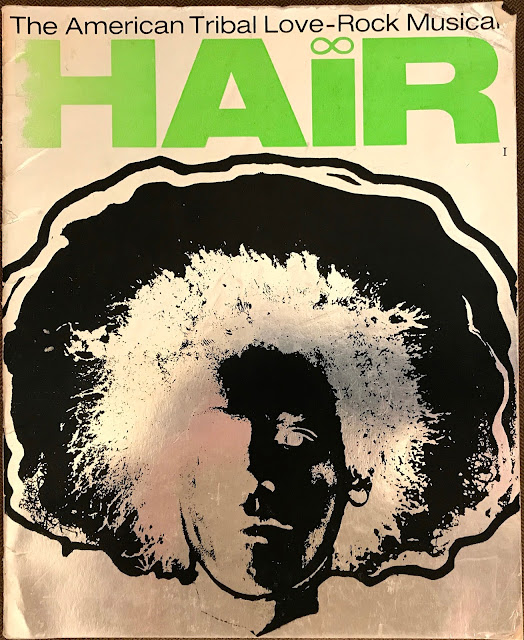 There was a time we had hair (as in courage). We, the corporate we; a generation, media, people with ideas and vision.
We make note it was 50 years ago this April when Hair opened on Broadway. Lana and I saw the London performance a year later. A few scenes follow below, but first  notes about how time has been unkind to the passions of conviction that mid wifed the birth of Hair the musical.

the woman with the curly hair and the stiletto mouth

I agree with Matt Taibbi's take in Rolling Stone on Michelle Wolf's performance at the White House Correspondents dinner. She said nothing more gross than what the current President has said, except she spoke truth as well as rapier wit.
A few years ago several serious journalists and their organizations thought it was unseemly to mix and mingle in the smarmy climes of lobbyists and lawmakers and the press  swilling champagne, seeing and being seen and watching the power tables.

We need a moment of historical clarification. The role of the media as the Fourth Estate of the American Republic is be a watch dog and monitor. It is by nature a cautious and adversarial relationship. There was a time when being friends with those you cover as a reporter was either out of bounds or were relationships that you built carefully and with ground rules.

After Wolf did what she does, we witnessed the absurdity of some of these privileged A list alleged journalists criticize the jokes, the jokester and come to the aid  of a faux "victim."  Some of these folks are the very ones to whom the obfuscation, prevarication, and political hackery is directed.
The ballroom at the Hilton is as much about careerism, ego, social Darwinism, and pretense as it is about saluting young journalists, giving scholarships and roasting the current regime.
When I did my tour as President of one of the nation's oldest press clubs I wrestled with the philosophic issues that came with the job. Years before our club had been opened to non press, including government employees and lobbyists. They helped pay the bills and as nature divined it, the club was a place where a lot of off the record, background as well as observation occurred. But we had ground rules.
Full disclosure, over a career I became friends with some of those I covered. I played basketball with a governor, dined with other politicians, hosted spies, feds, and enjoyed adult beverages with any number of apparatchik. But we had ground rules. One of the guys called it "drunk back ground denial," a term of art more than fact. They knew that someday I might be after them. I knew that someday they might deny me information. We knew we could eventually take aim at each other. It was a tight rope walk, but a reality.
One of the people who was most critical of Michelle Wolf is a person who was a romantic partner of a national security advisor, and who eventually married a chairman of the Fed. Good for them and no doubt there were advances on inside information, but for heavens sake don't apologize for a comic taking her professional shots at a woman who has lied, for her boss, another known liar.
Taibbi speculates that Wolfe hit too close to home when she told the alleged journalists in the room they made Trump into the monster he became and now they are advancing their careers, selling books, newspapers and television shows because of him.
Back in our day our Gridiron scholarship fundraiser featured a gag newscast-real fake news. The senior anchors and producers of the television stations would spend weeks writing phony and funny news stories, manipulating video tape and being outrageous. Yes, we were in the same kind of  clime with the politicians and the beautiful people but we delivered sarcastic, lampooning and withering ammo, that could be devastating, though appropriate, and got laughs. I can't recall any of our press corp apologizing to the governors, senators, congressmen, lobbyists, basketball coaches or state office holders. It was all about the jokes. But it was a different time.
There were no trigger alarms, or micro aggression alerts. But mostly there were no sacred cows and just maybe there was a greater dedication to craft and job and not so much obsession with celebrity.
One of the things some of the people who voted for the current President said they disliked was the elitist, insulated, privilege of "Washington." Well, the current regime has no shortage of privileged wealthy, some of whom have been caught taking advantage of the public coffers, so don't you think the press,  there to be a watchdog, should be more like a Michelle Wolf junkyard dog than a lap dog, or pussycat?
The Washington Monument will not fall, and the Republic will not dissolve if the Correspondents Dinner and the faux celebrity show it has become, were to change or go away. 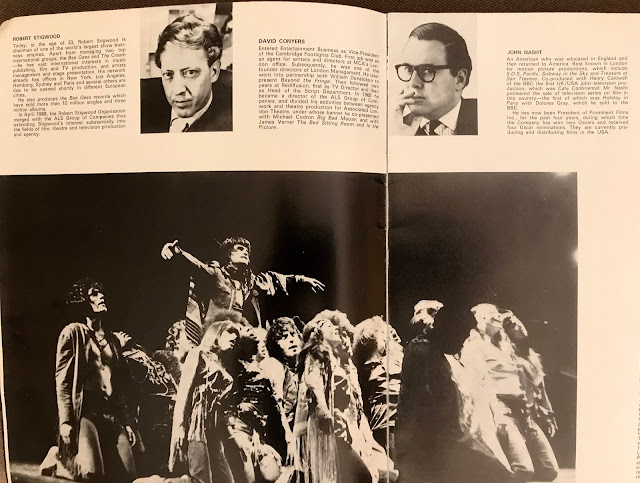 Eventual media giant Robert Stigwood was a mere 33 when he got behind the convention shattering musical playing the Shaftesbury. 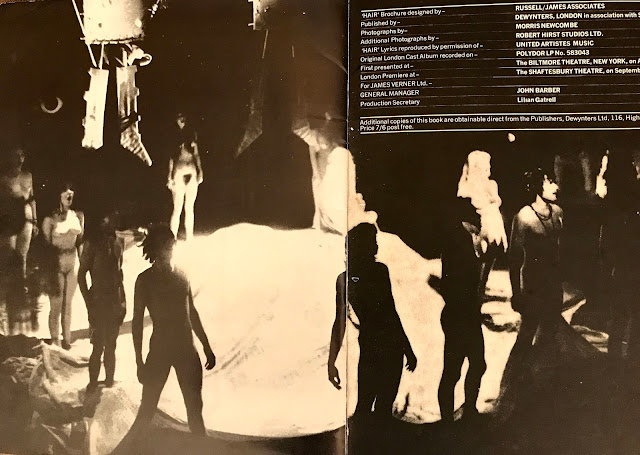 Hair created a stir and evoked lots of reaction. The nudity, sound of the music, lyrics, the frenetic energy and the story were non traditional. 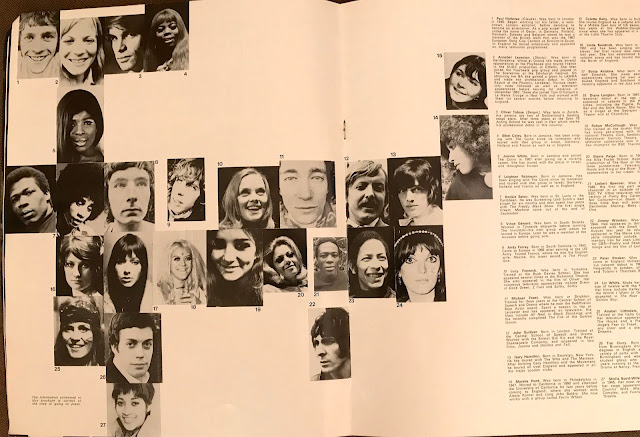 Most of the casts, in the US and in London, were young.
We saw Tim Curry, #26 in his earlier personhood. Some of you may remember him from the later Rocky Picture Horror Show. 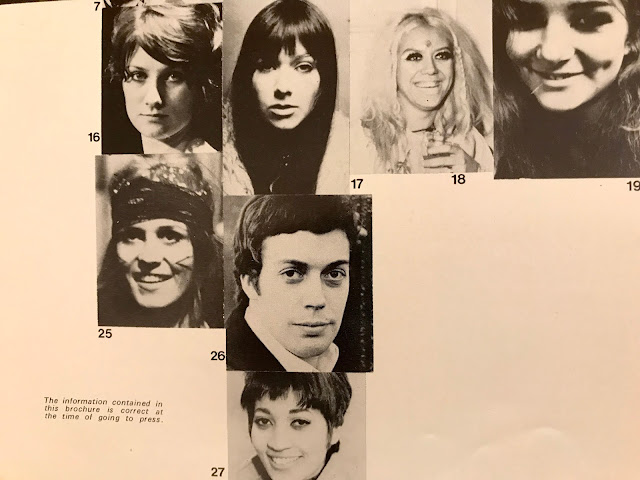 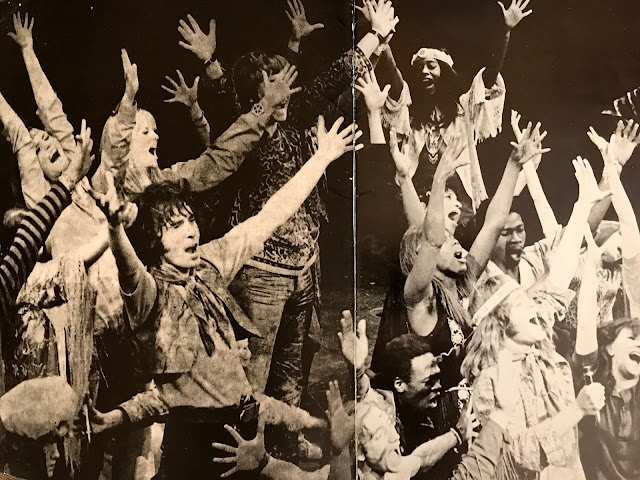 The moon may have been in the Seventh House, and Jupiter may have aligned with Mars, when peace would guide the planets and love would steer the stars. But in 1968 the dawning of the Age of Aquarius had some other heavy players.
Hair opened on Broadway just a couple of weeks after Dr. Martin Luther King Jr. had been killed. It was six weeks later that Bobby Kennedy was killed. It was a couple of months before the Chicago Police Department went on a riotous, rampage beating people at the Democratic National Convention in Chicago. It was at a time the Viet Nam war was killing thousands. It was the year Richard Nixon was elected President.
That bold raucous, controversial, convention shattering Tribal Love Rock musical seems so innocent and 50 years later just as hopeful-

"Harmony and Understanding
Sympathy and trust abounding
No more falsehoods or derisions..."
Ready for the mind's true liberation?
Ready to let the sunshine in?

See you down the trail.
Posted by Tom Cochrun at 10:05 AM