the land is alive... 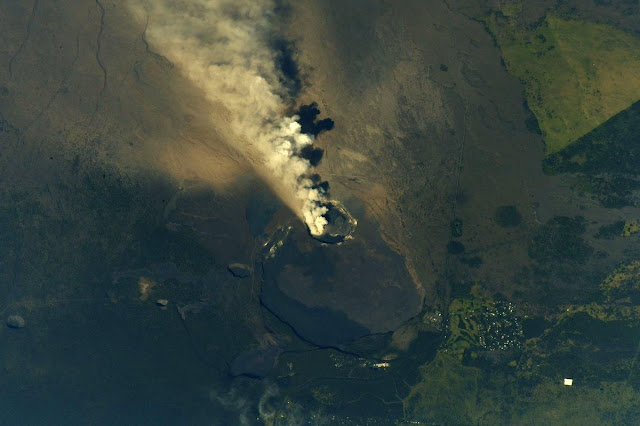 The Kilauea volcano is impressive, even from the International Space Station. Astronaut Drew Feustel posted this shot over the weekend.
Kilauea had a profound impact on me. 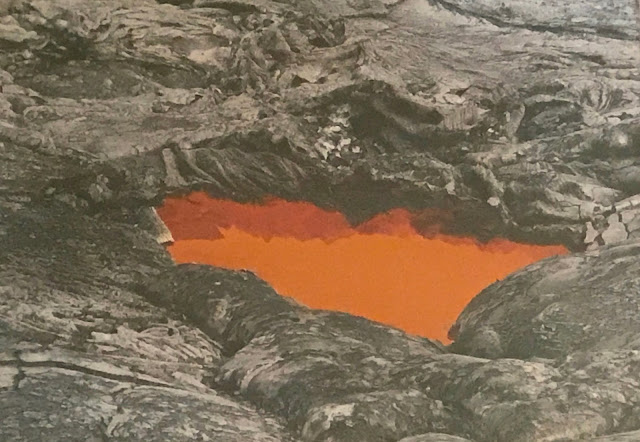 The frame above is called a "skylight." It is an opening burned into the surface of the earth by the molten lava flowing below the surface. It radiates an intense heat. Anything too close melts, immediately. I needed to protect my camera lens and I could feel the soles of my hiking boots begin to get mushy. 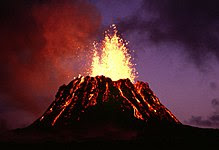 This photo taken by G.E. Ulrich of the USGS is the Pua'O'o crater in June 1983 shortly after it began to erupt. 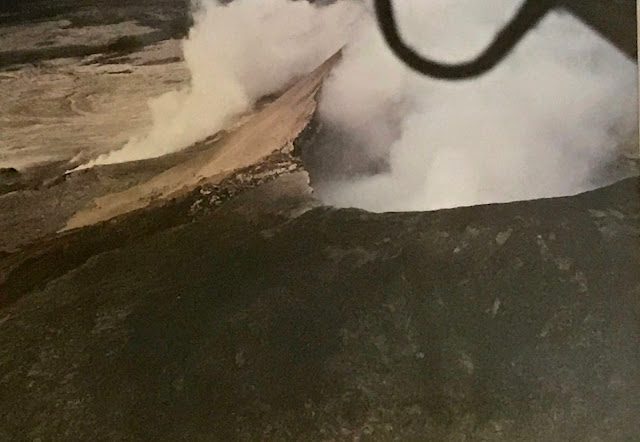 I shot this from David Okita's helicopter as we flew over Pua'O'o in 2001. I was producing a documentary for Discovery. USGS Volcano expert Donald Swanson and I were flown to the lip of the crater and stood staring down into the caldera. 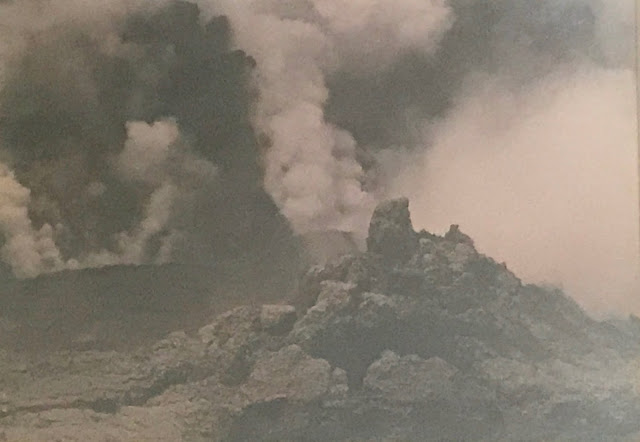 On this July day in 2001 the Pua' O'o crater was the gas and sulfur belching center of a crumbling mountain. We needed to pay particular attention to where we were as fissures and cracks cross hatched the rim where we stood looking down into this cauldron of earth. It resembled a pile of rocks or debris perhaps, but it was a furnace of sorts.
Here are notes I made
David Okita then lifted Don Swanson, Chris and I to the north rim of Pu’u ‘o’o, one of the worlds newest mountains.  Pua’o’o’ is about 18 years old and was created when Kilauea began erupting. We stood on the north rim looking down into the crater.  From a distance the crater emits huge clouds of vapor.  We stood on a narrow precipice looking into the source of the vapor clouds which had been visible from miles away. The caldera was an engine of vents for steam and for sulfur dioxide.  The steam blew like a white cloud, while the toxic sulfur dioxide leaked as a bluish or gray vapor. When the wind blew from our back it would clear the crater and Don and I clicked away, shooting pits, remnants of a fountain cone, and various volcano aftermath. A sound would rise out of the depths, sounding like surf crashing or wind blowing.  After one particularly loud surf sound, Don said “Oh,” with a sense of real wonder “Oh.” He then radioed to the observatory and asked if the seismic data had recorded a gas piston tremor. He explained the sound was gas escaping from below the cap, escaping in a major way. The Piston tremor was a kind of earthquake and the ground vibrated beneath us."

One of those tremors roared like a jet engine and everything in my world shook. The acrid dark sulfur smoke enveloped us, my throat hurt, it was difficult to breath, and I felt sickly. I understood in that instant that planet earth is still creating itself with a force unlike any thing of human scale. I radioed for David to bring the chopper back to base of the mountain and Donald and I trekked down to rejoin my crew mate Chris who wanted nothing to do with standing on the edge of a live Volcano.
Later I learned the tremor was equal to a strong earthquake. 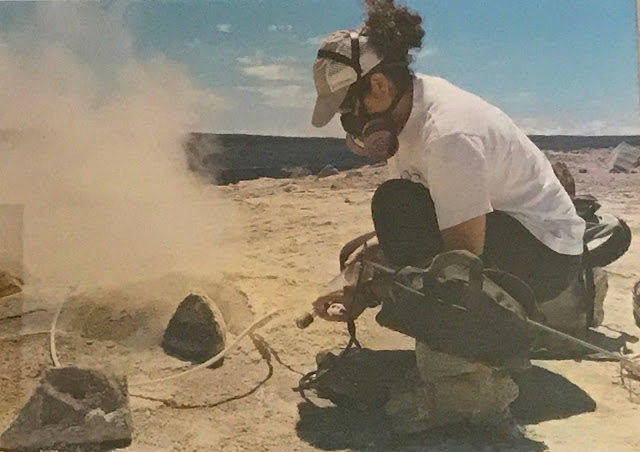 Above gas chemist Tamar Ellis works on one of the fumarole vent fields where gas and steam leak from the earth. BTW, Tamar gave Donald and me the "what for" treatment when she learned we had gone up to the rim without respirators. The inside of my nose felt the affect of the gas leaks for many weeks afterward. 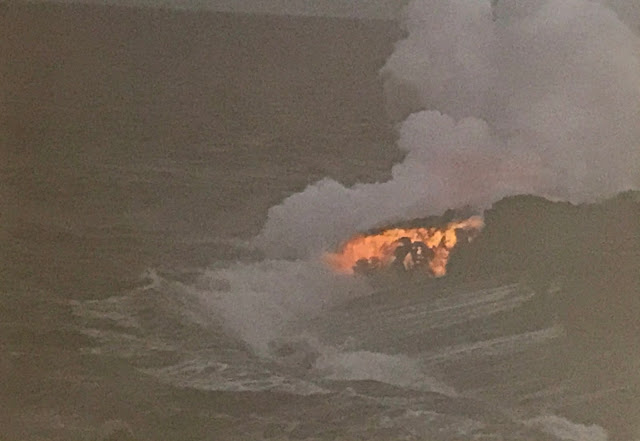 We hiked one evening across old lava fields to a place where we could watch the hot material flow into the Pacific.
This is an act of creating earth. As it cools, it adds a new bench of earth to the island. It is how the Hawaiian islands have grown into existence. Earth, giving birth. 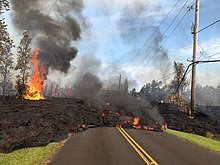 The USGS captured this image of lava moving across the road, just a few days ago.
Kilauea has erupted many times in its history, but this current eruption began in 1983 and is the longest volcano eruption in history. In the last couple of weeks it has become even more active and is claiming more land with lava that will eventually cool to look like the frame below. 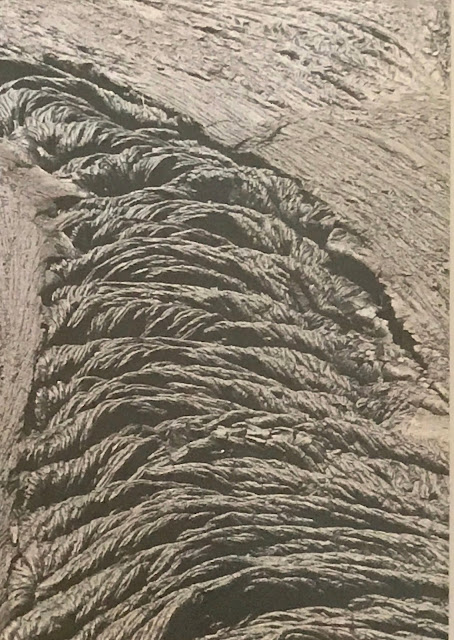 Journalism, reporting and documentary production has provided a life of adventure and fascination. Many things have touched me. When I stood at the edge of the Kilauea Volcano I was humbled and stunned by how this old mother earth of ours is still baking itself, still growing and lives. Solid ground or terra firma have less credibility with me.
Our helicopter pilot David Okita is an Hawaiian, a life long surfer and a most mellow gentleman, one of the most relaxed people I've had the privilege of knowing. David is forever fascinated by the volcanoes and offers a simple but wise truism, "The land is alive!"

If you are interested in volcanoes or the "ring of fire"
you may wish to link here to an account of flying to and climbing on Alaskan volcanoes, also an assignment for the Discovery Channel networks.

See you down the trail.
Posted by Tom Cochrun at 4:25 PM