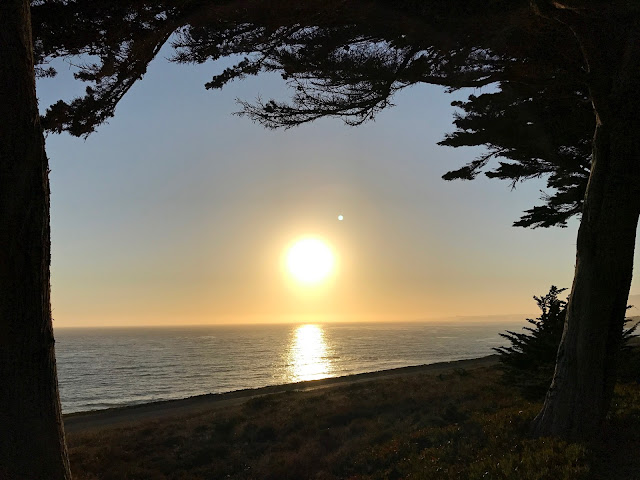 North of Cambria, early July
The president's foreign trip underscores a universal acknowledgment, the leader of the US is no longer the most powerful nor is he the "leader of the free world" as we used to say.
International leaders are joined in chorus by analysts and writers from the right and left-America's role has been diminished by Trump. They agree Vladimir Putin has more moxie, finesse and muscle than the American president. Other leaders are assuming the moral and ethical leadership role, previously played by the American President.
If Trump has a cogent policy, it has not been articulated. What the world hears is "America first," warnings about enemies, the freakish, petulant, embarrassing behavior and a serious lack of grasp. At least he can read a teleprompter.
We take a deeper dive, later. 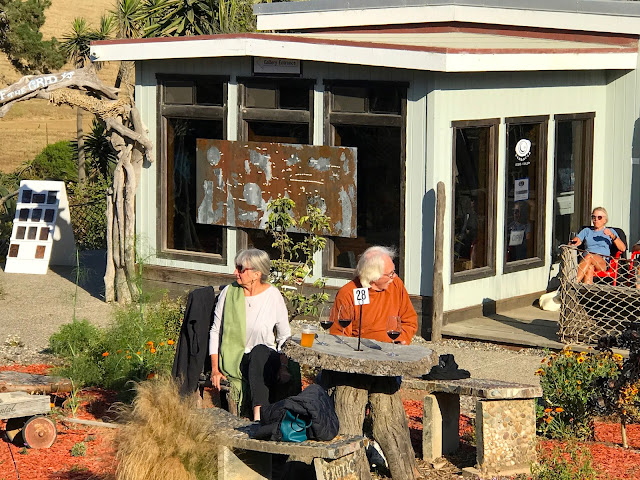 I can't help but chuckle at this. The body language and pose is hilarious.
In fact Lana and our pal Grif are looking for other friends, but the symmetry of the snap is amusing. 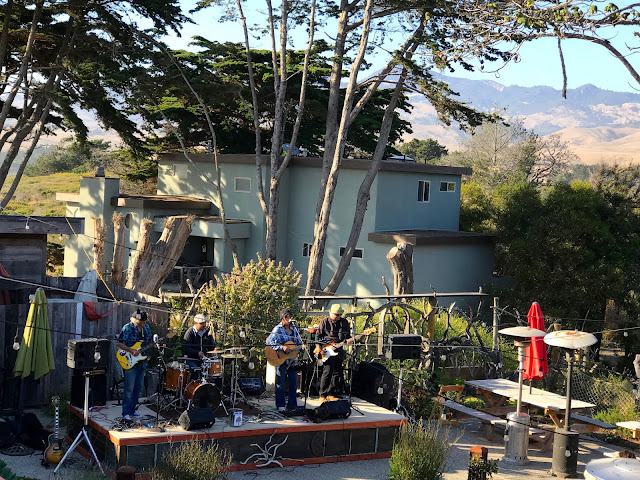 A delightful reality that struck us some 10 years ago on our migration to Cambria is it's similarity to a big Arts School.
Cambria loves music. It's an art colony and home to musicians, writers, guild and craft artists from Hollywood and television, bohemians of several generations, free thinkers and free spirits. Of course there are others too, master gardeners, dog lovers, cat lovers, nature lovers, hikers, surfers and people of every conceivable political stripe and attitude. We have our one percenters too, but not nearly in the concentration you find further north, or south. There is a large cross ideological percentage who love music and hanging out.
We've watched this joyful past-time and we followed its change of venues. The Painted Sky recording story in its evolving locales. The departed Wise Owl was a guaranteed good evening. Now popular singer/songwriter Jill Knight has organized for a new venue-Centrally Grown, formerly the Hamlet.
In the scene above Jill is joined by the accomplished Eric Williams and Billy Foppiano.
She will perform and so will others from the deep bench of Central California talent. The constant party has a new location and we boomers remain in our suspended state of a big high school crowd waiting for the next party. 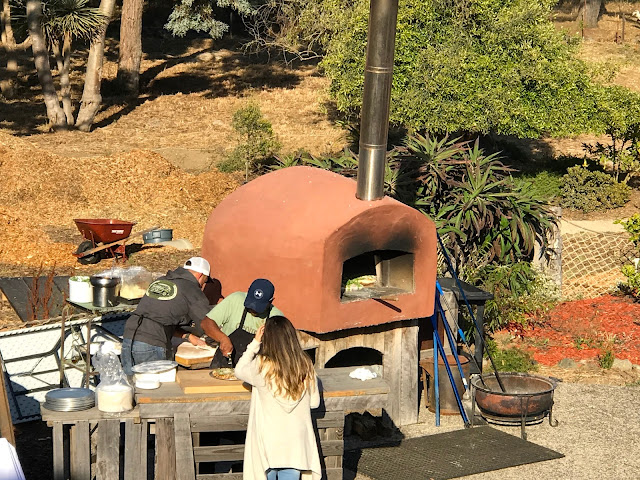 A wood fired pizza, glass of wine or beer, great music, friends and a lovely California evening has to be high on the list of "as good as it gets."

and there is much to recover from
I've been reading the conversation among Republican, Libertarian and Conservative friends who have tolerated my pragmatism and political agnosticism for years. They are not trump supporters. They certainly are not liberals, Democrats, or anything other than what we consider traditional moderate to right center Republicans.
I agree with their notion the trump vote commission is wrong. It is federal overreach, dangerous, sinister and anti American.
It is a nefarious attempt to gather and collect data the Federal government has no need of, nor right to expect. To turn it over would pose the risk of likely abuse and manipulation by the trumpist/extreme right wing cabal or others. There could be no guarantee the data would be safe, anywhere. We can't forget this administration had to be shoved into acknowledging the Russian cyber attack on America.
(Getting to the bottom of that attack and determining if there was participation on the part of US citizens is a national priority.)
The states that have flashed the bird at the trump election commission requests are to be applauded.
Another nagging thought. Mike Pence is quietly working to build his donor base. While his boss is watching a big screen television and tweeting, the VP has been hustling money and preparing for a post trump world. This very guy whose Indiana Republican party was ready to depose because of his nefarious right wing schemes and embarrassments to the state, would have access to, if not control of, the private voter data the trump commission has been asking for. That should also give you the willies.