DISPATCHES FROM MOTHER AND A STEELY DAN

ARE WE BETTER FOR IT? 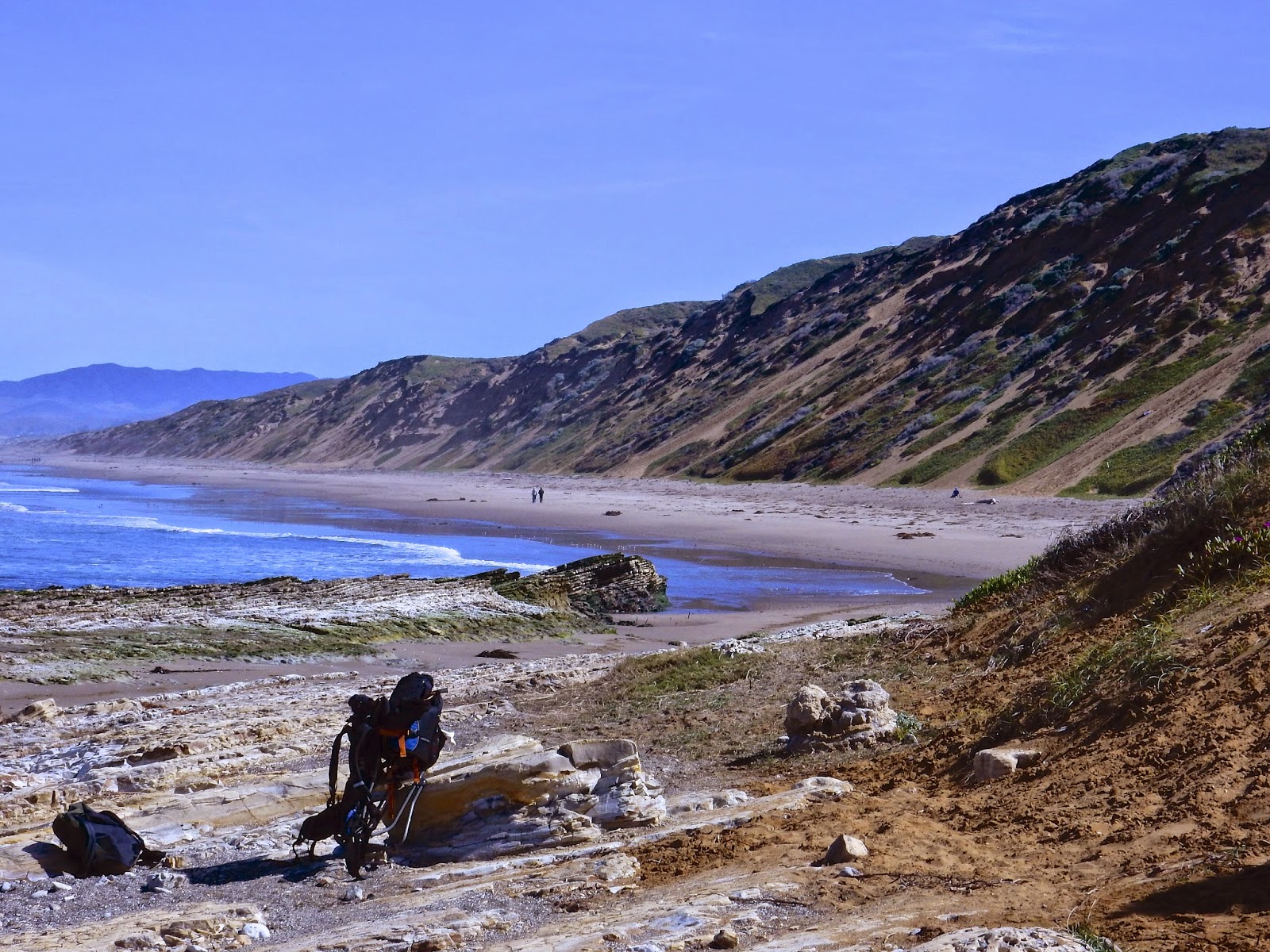 Earth Day was born in a setting very much like this. In fact the actual site was 2 hours south along Santa Barbara. Wisconsin Senator Gaylord Nelson had seen the ugly tragedy of the 1969 west coast oil spill and conceived of a day to spark an awareness of planet health and to take advantage of the political activism of that era.
It was a far different age in 1970.  Democrat Nelson got the cooperation of California Republican Pete McCloskey to serve as his co-chair and the rest is history. But what kind of history has it been?
Environmentalism is an international movement, but some deride environmental awareness. Nations now have Environmental Protection Agencies and clean air and water laws, but politicians in cahoots with industry find ways to put money first.
Precious forests are being cut or burned, waters are poisoned, there are dead zones in the ocean, the air is unbreathable in cities, the climate is changing and industry groups pay billions to stop remedial efforts or change laws.
An alarmist view is sounded by author Naomi Klein who says the world's economic systems are at war with planetary health and well being. At another extreme some refuse to acknowledge the planet's climate is changing at all, even by natural causes.
We can recall Earth Days that have been celebratory, noting passage of laws and clean ups of hazardous sites and spills. Today Earth Day strikes me as an effort at emergency triage. We know what's wrong. We know how to prevent or fix most of it. But we seem emasculated. Rather than vigorously pursue planetary health which is also the health of human kind, we continue sewing seeds of demise. The leading player in this tragic farce is greed.
Earth Day is too important about which to become passé.
What do you think?  Do we need a shot of activism? Would it make difference? What do you think is to come?

SNAPSHOTS FROM THE MOTHER SHIP 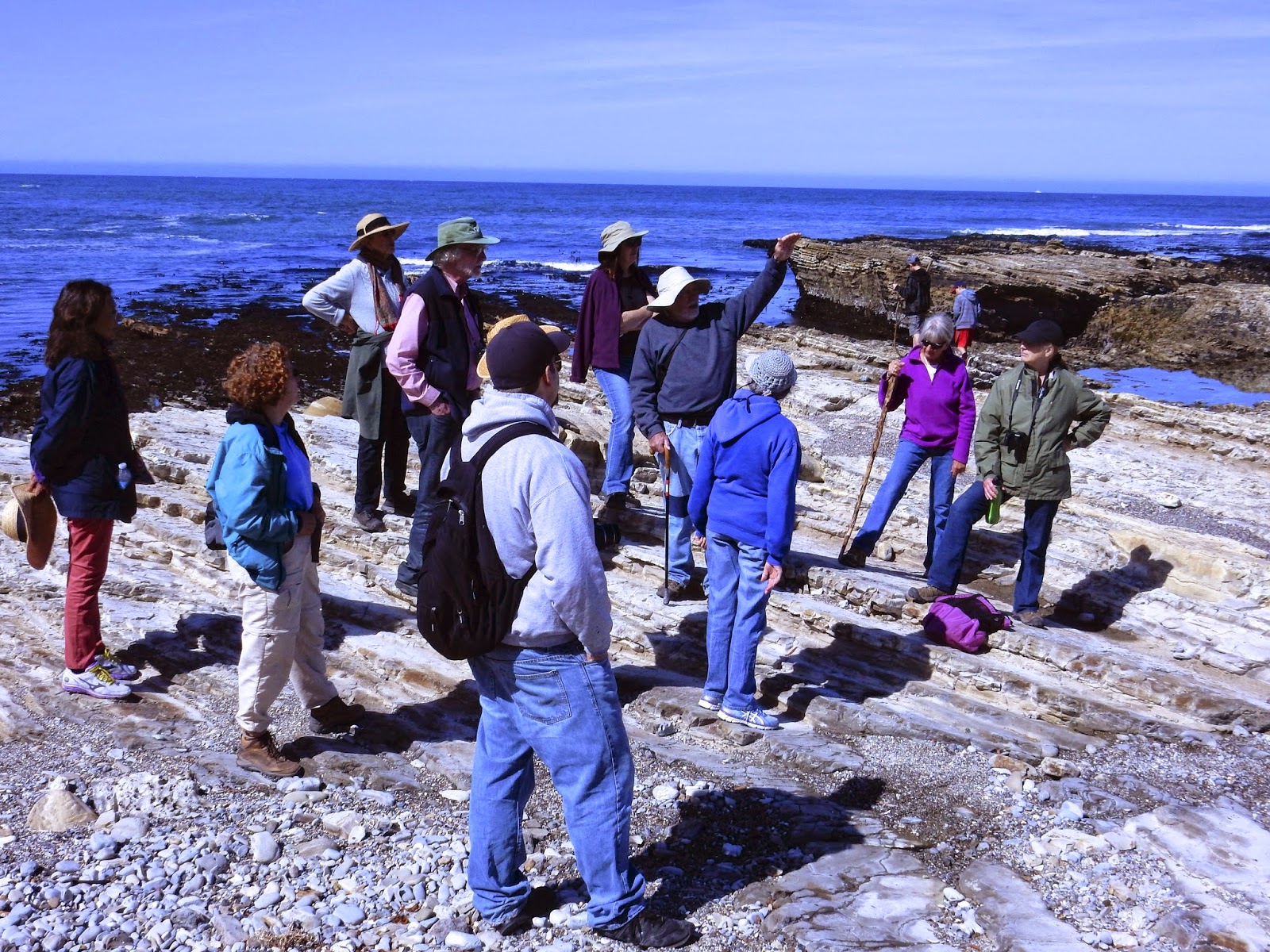 A group of folks gathered recently at lands end and on old earth and seabed to learn from geologist Dr. David Chipping. 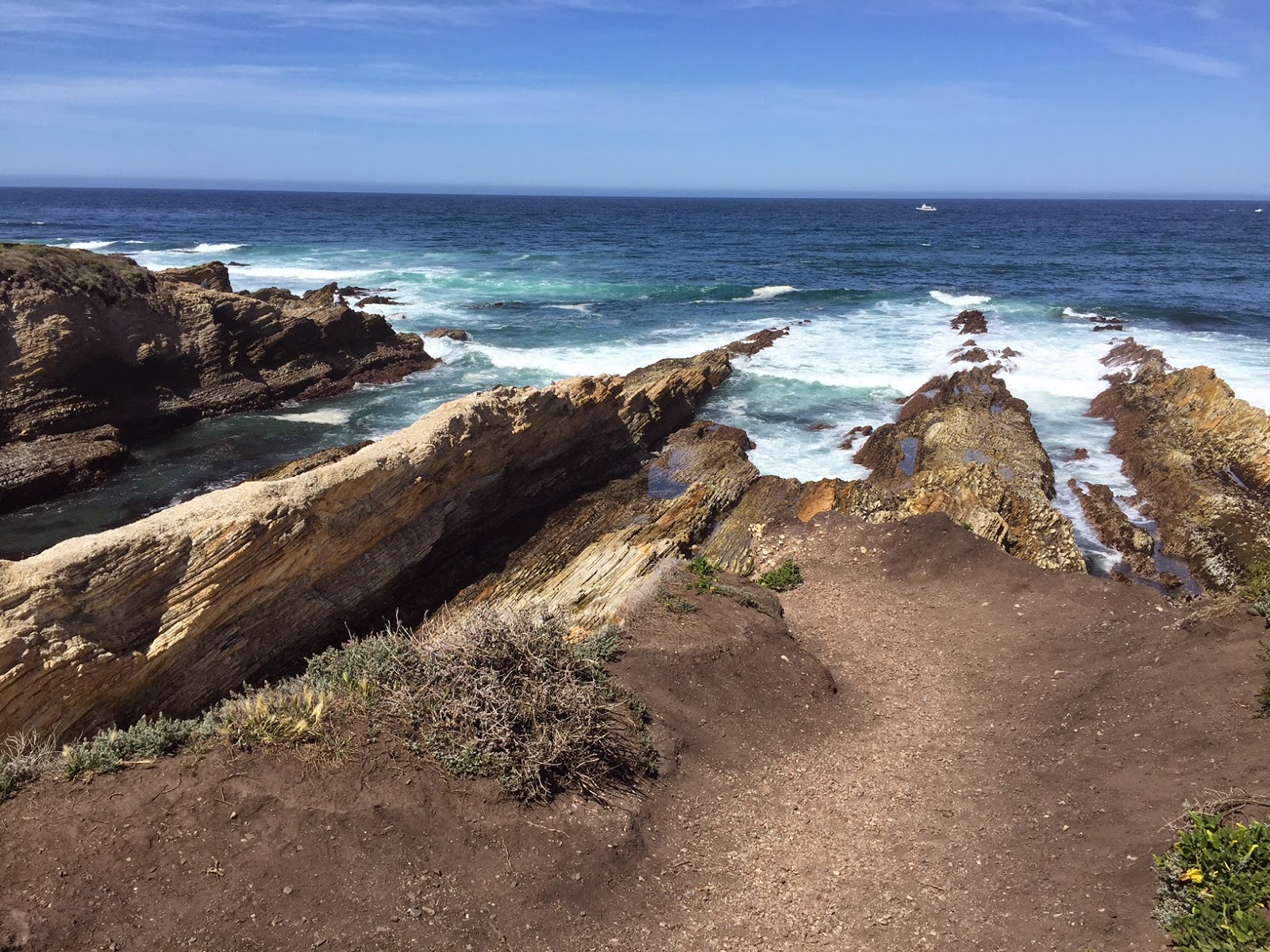 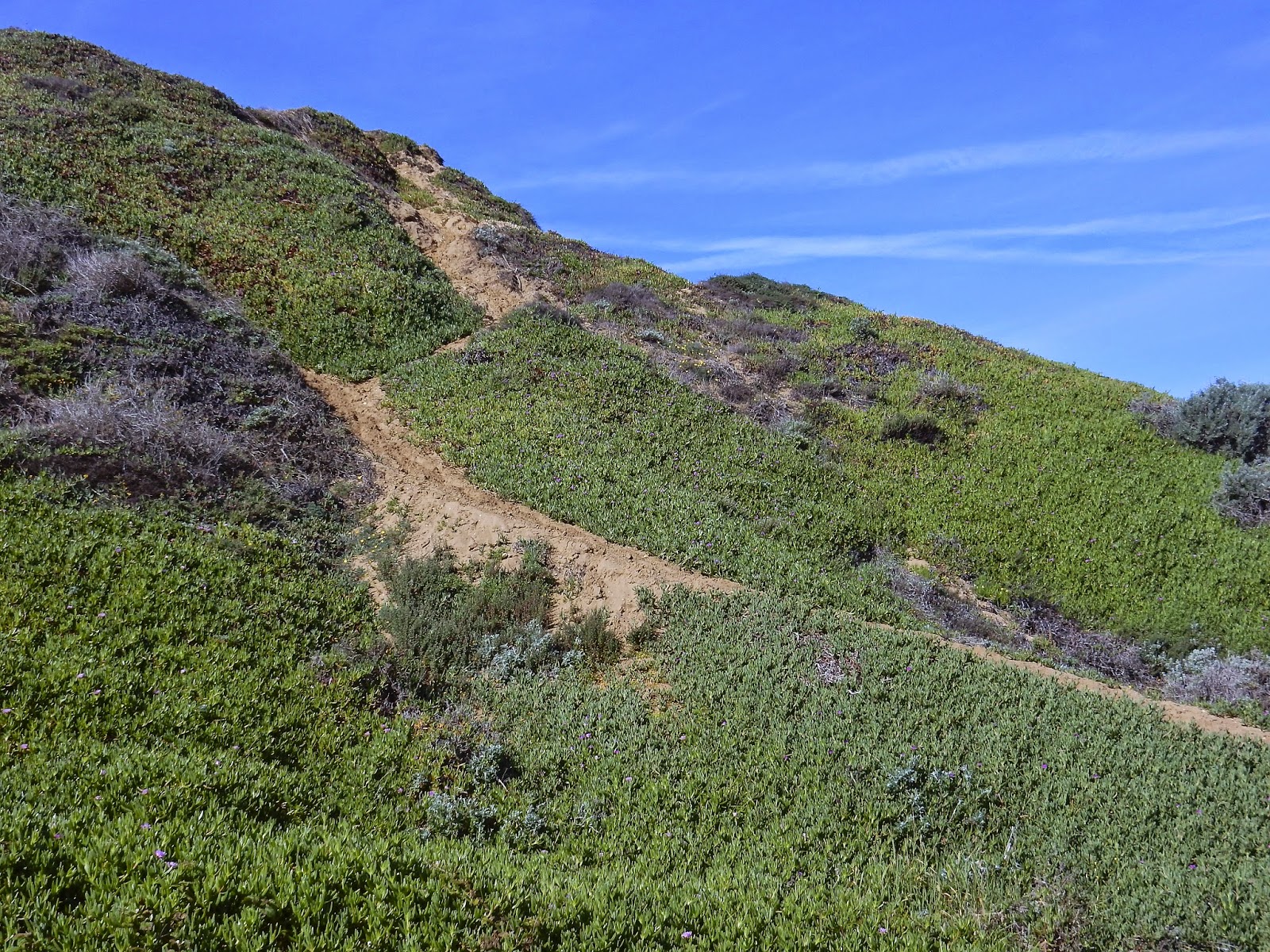 The play of earth and sea never ends.  Faults and other forces of nature create and change terra firma. 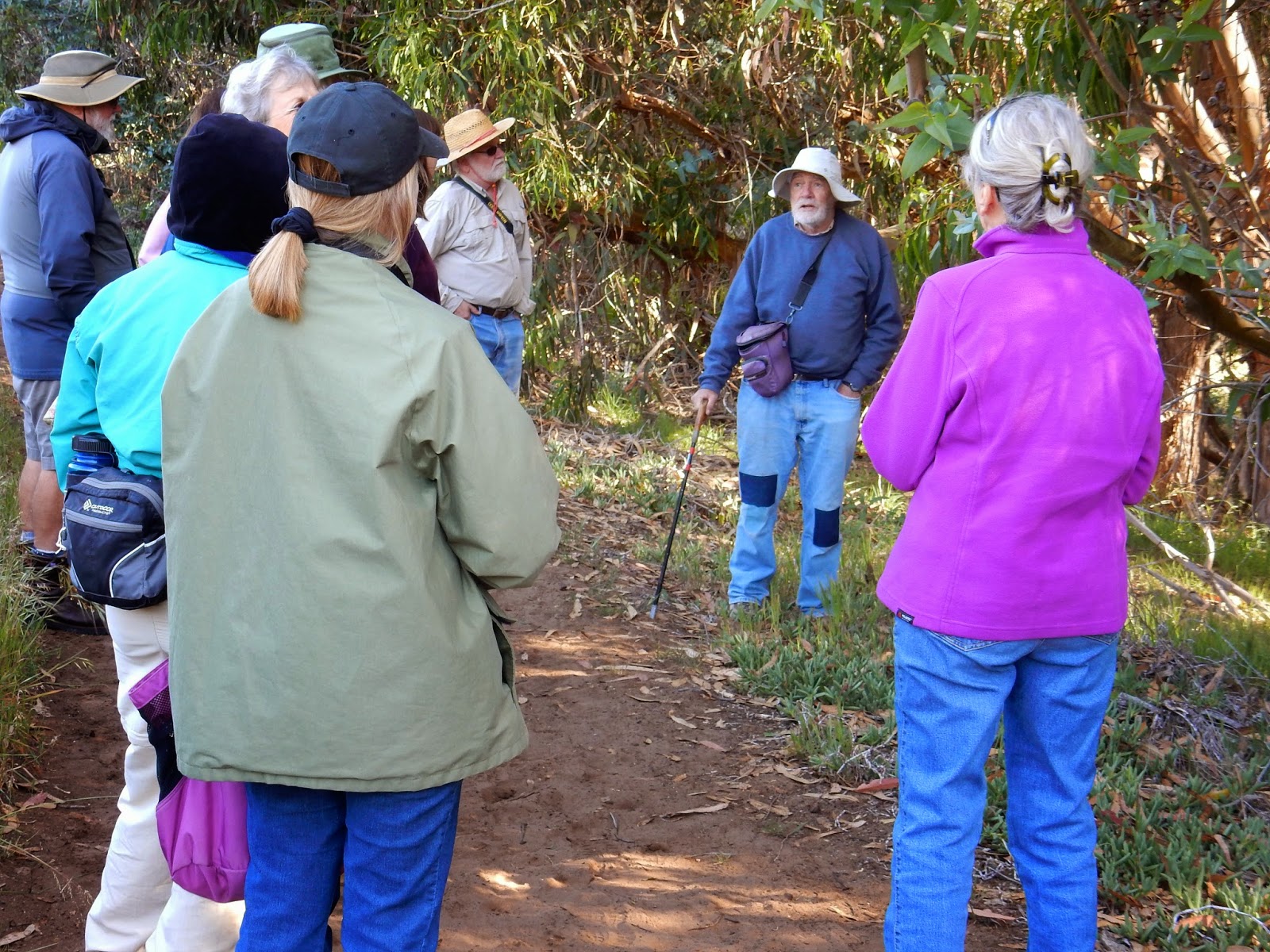 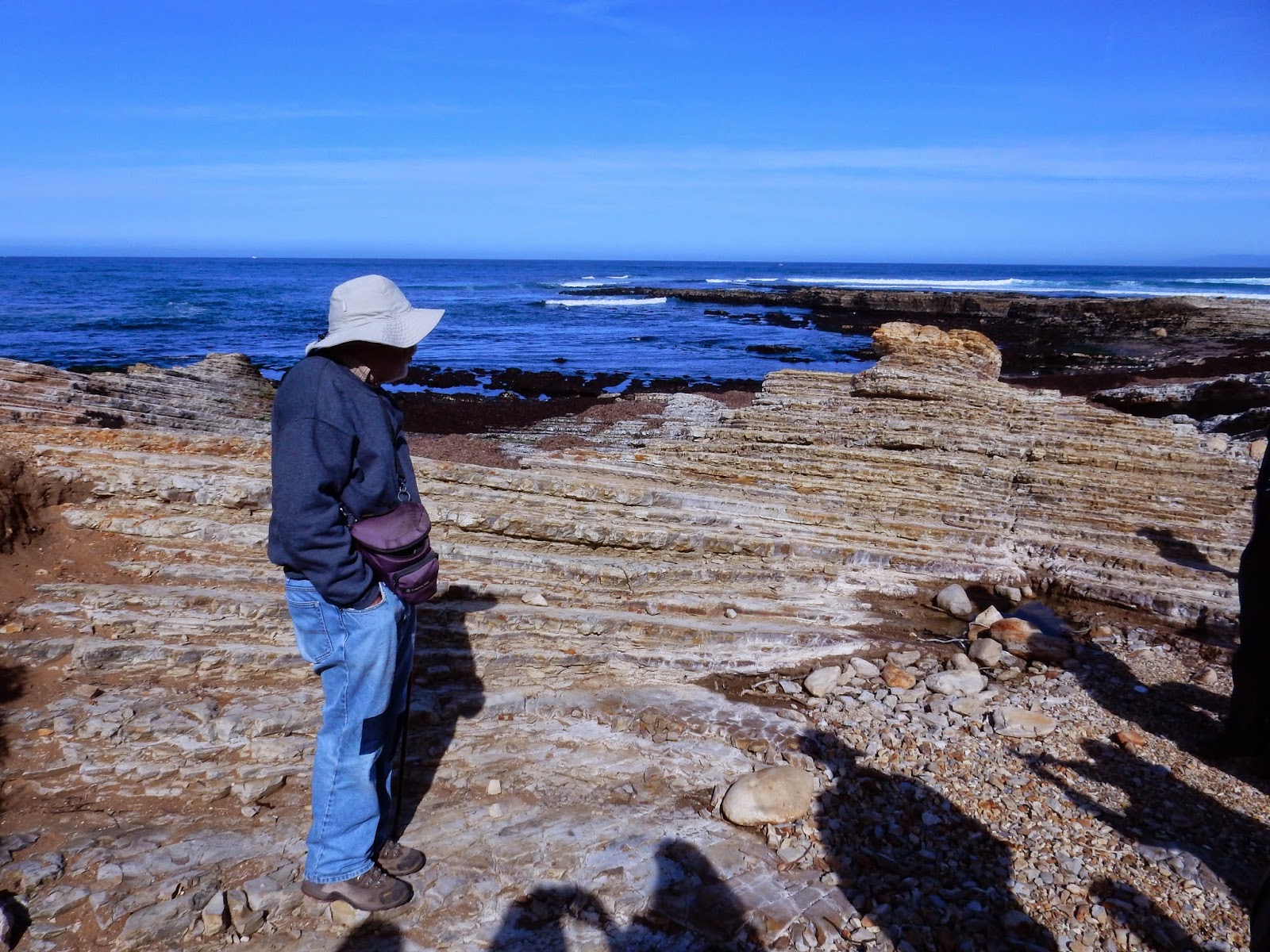 The story of centuries are written in layers of rock and stone. As Dr. Chipping said of the cut away below "There's a nice picture. It tells a story."
Layers that speak to ages of sea, wind, sand and earth in continuous dance and tumble. 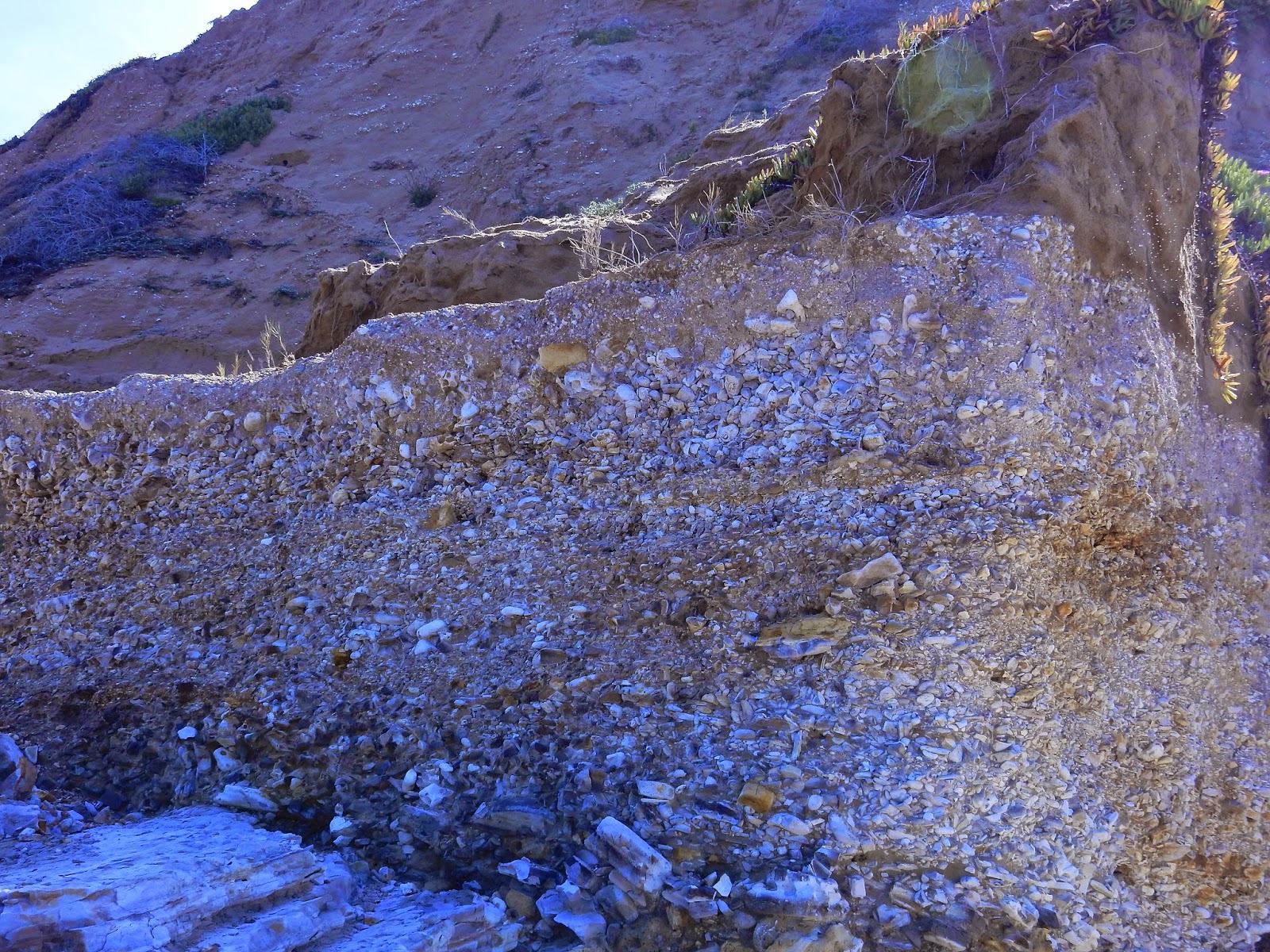 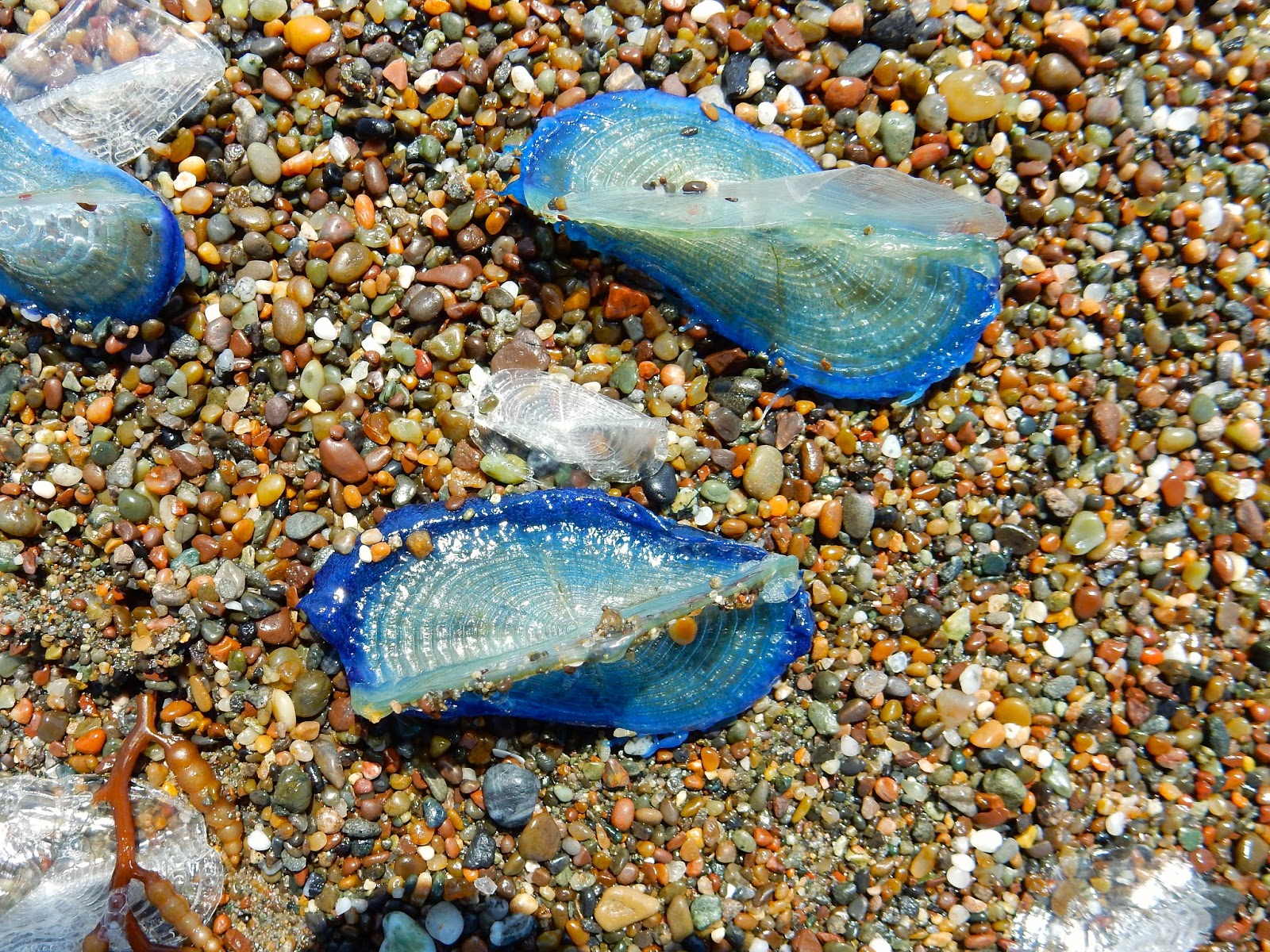 Warmer than normal Pacific waters teamed with wind currents have produced an unusual phenomena along the central coast-millions of Velella velella. They are zooids but rather mysterious. Something like Portuguese Man of War, they have a sail that carries them over the water. In the last week, they have been washing ashore along California beaches. 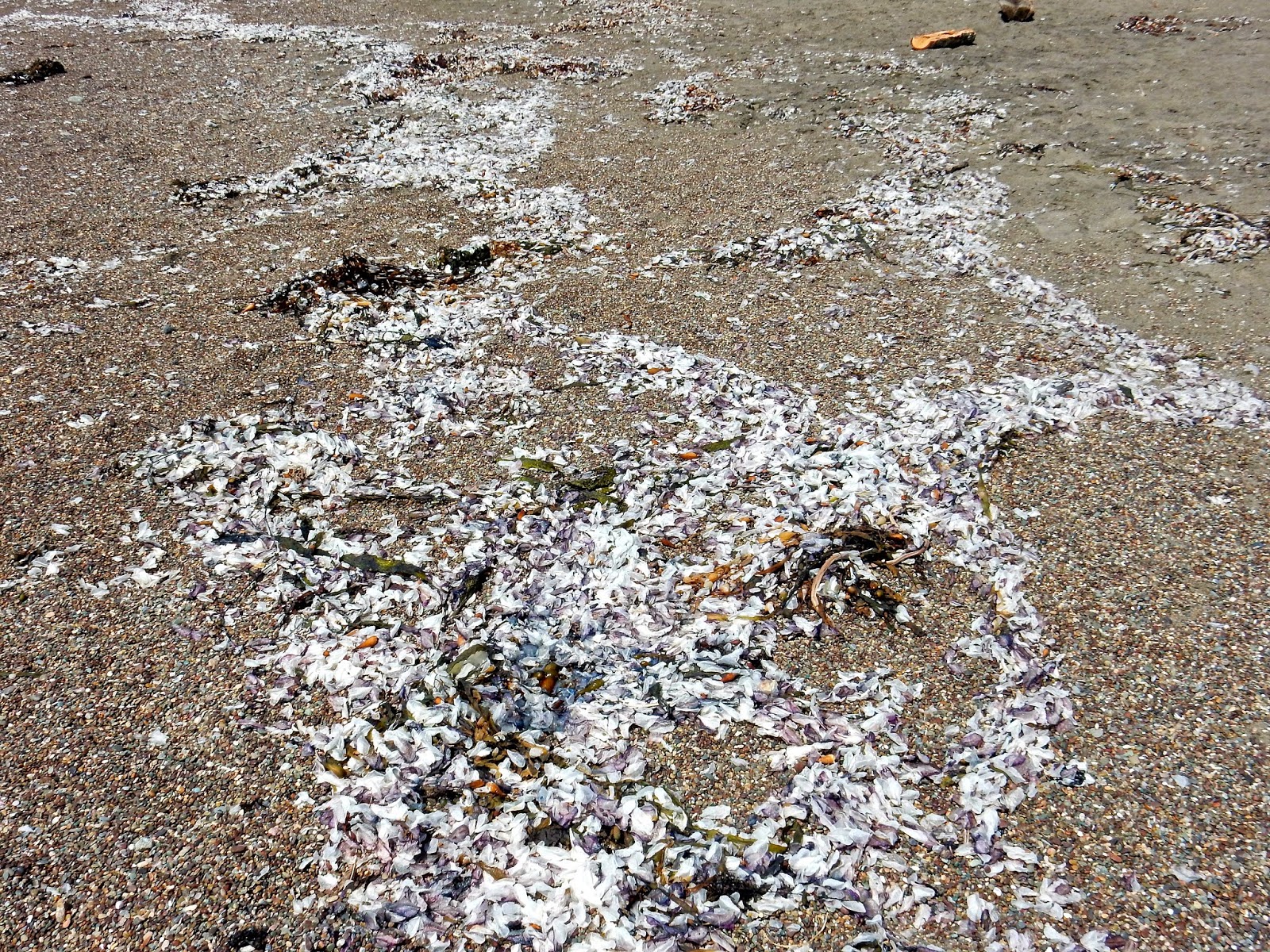 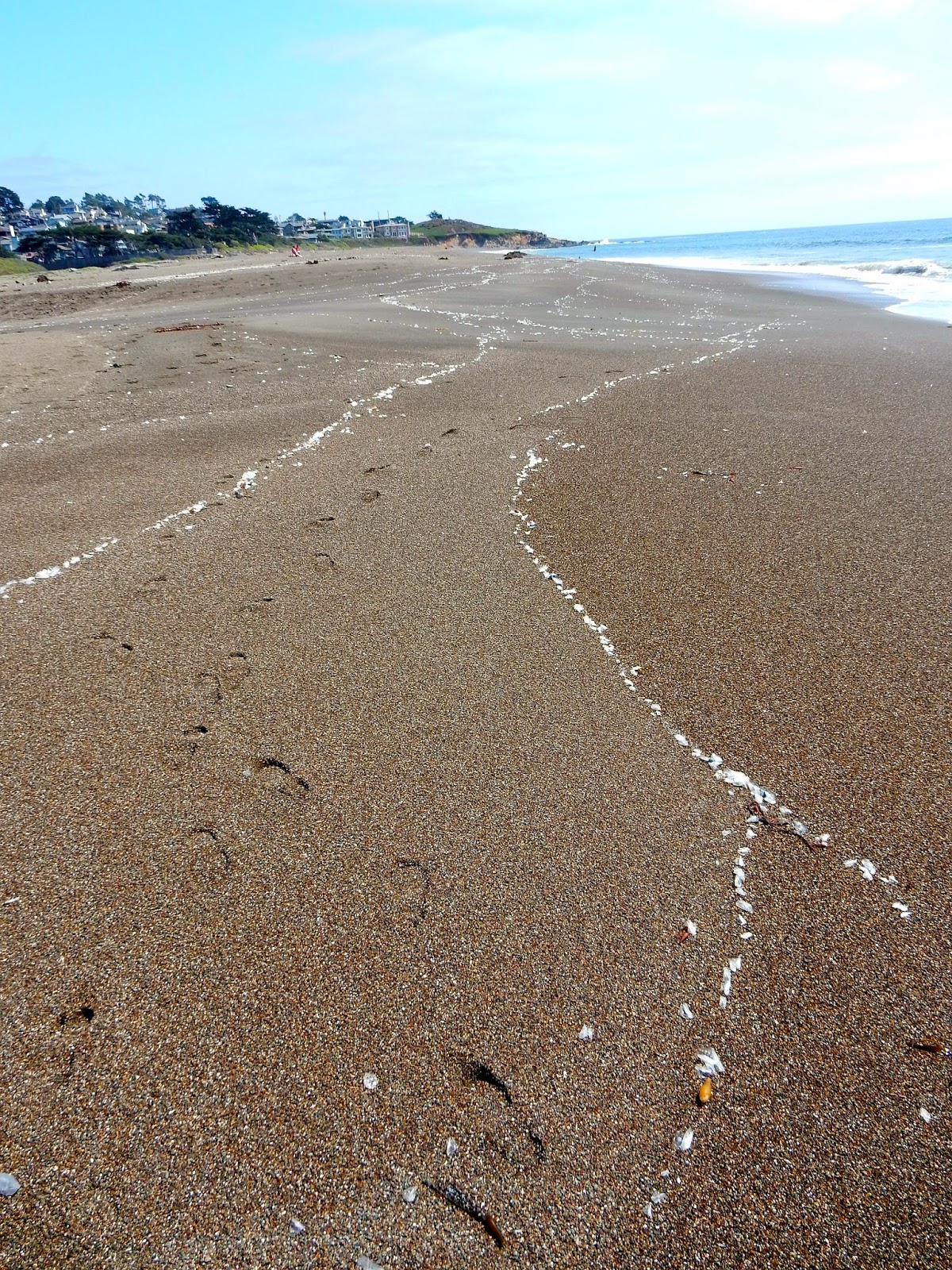 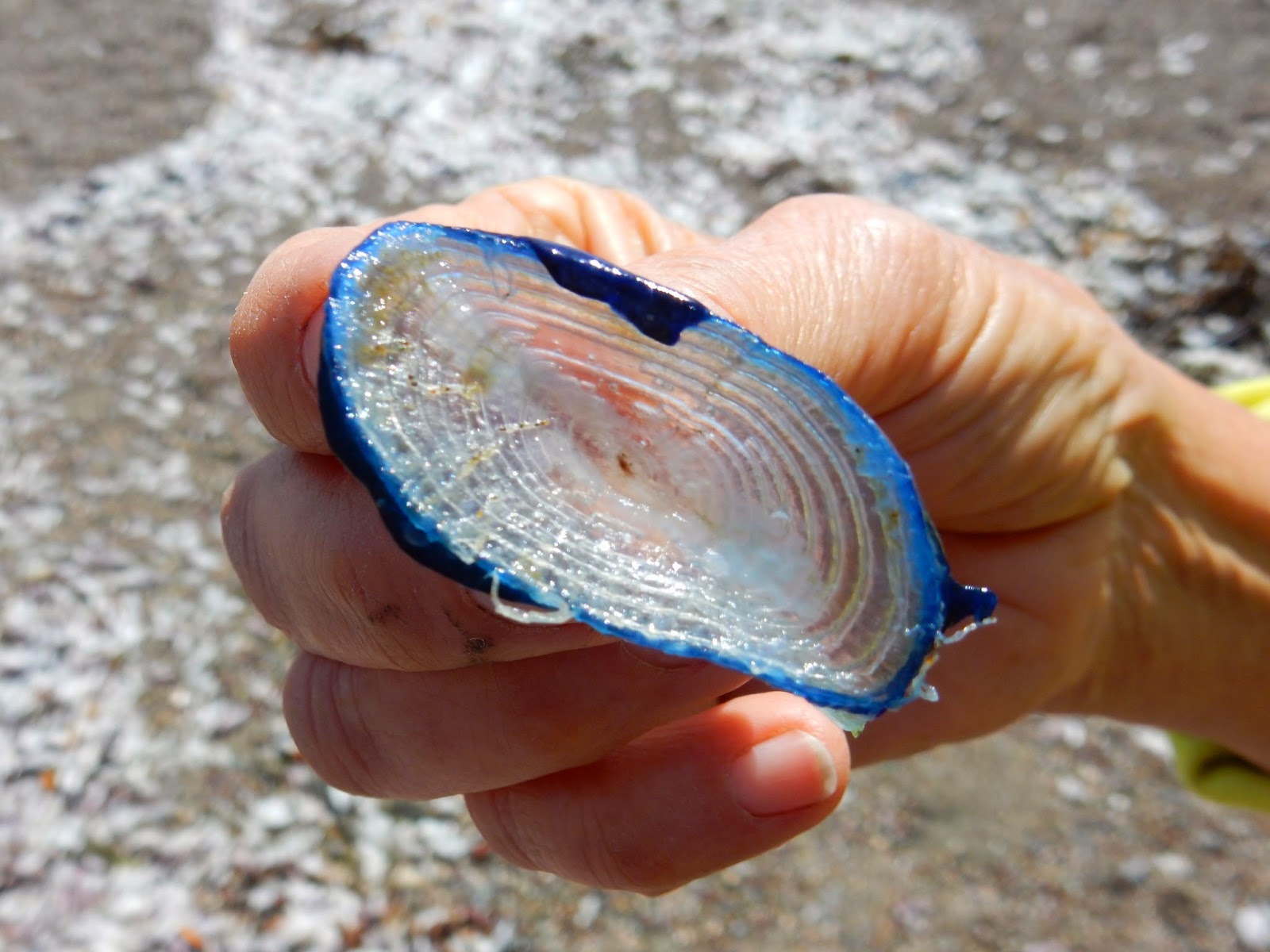 They bleach out and loose the top sail and the vibrant blue, but become a kind of wave marker. 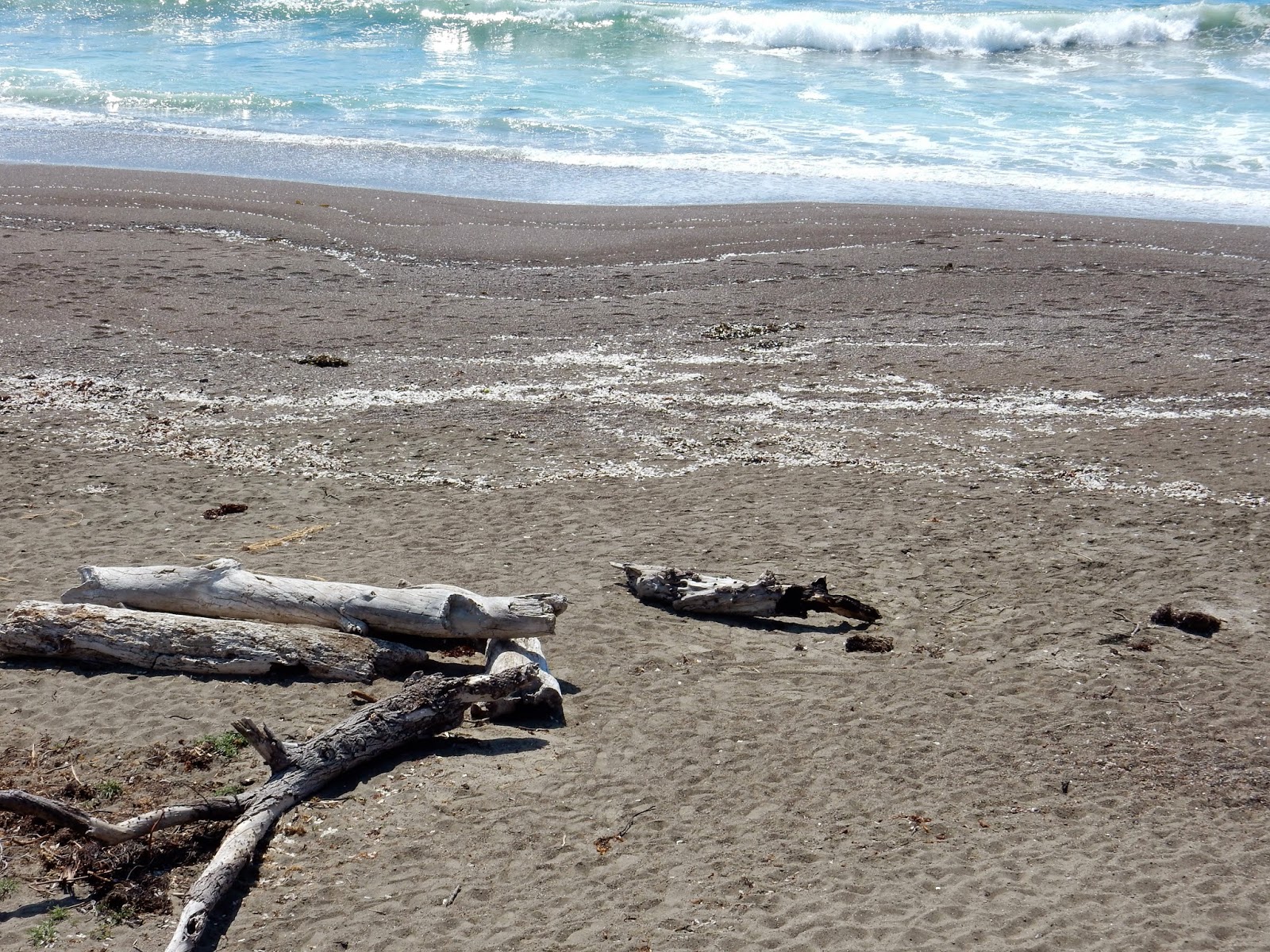 GOOD FOR THE PLANET'S EARS 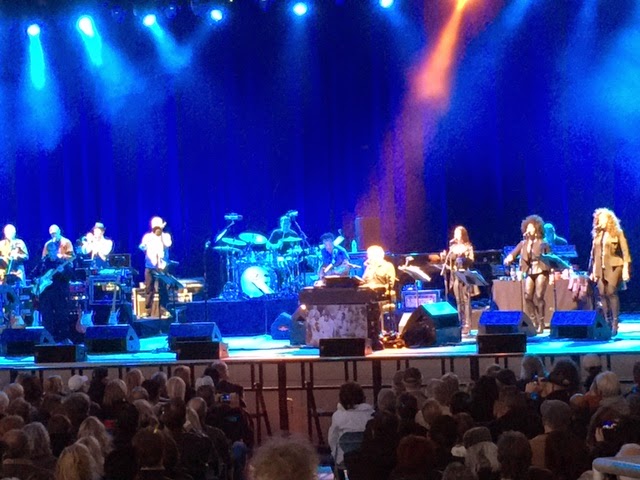 Recently saw Walter Becker and Donald Fagan and friends, AKA Steely Dan in a kind of pre-tour warm up. They will hit the road for a major tour this summer, sharing a bill with Elvis Costello.  If they come to a venue near you, and if you like mastery of sound in a rock/jazz fusion, make sure to see them.
They lay out a sound structure, like a building. It is an intricate combination of individual instruments and voices that you can follow or you can widen out and hear some of the most intricate, complex and sweet musical creation on the planet.
These guys stopped touring until they could master the intricate sound system required to capture the artistry they produce.  This is a link to a quick look at some of the best musical players on mother earth.