LIVING BENEATH THE MOON 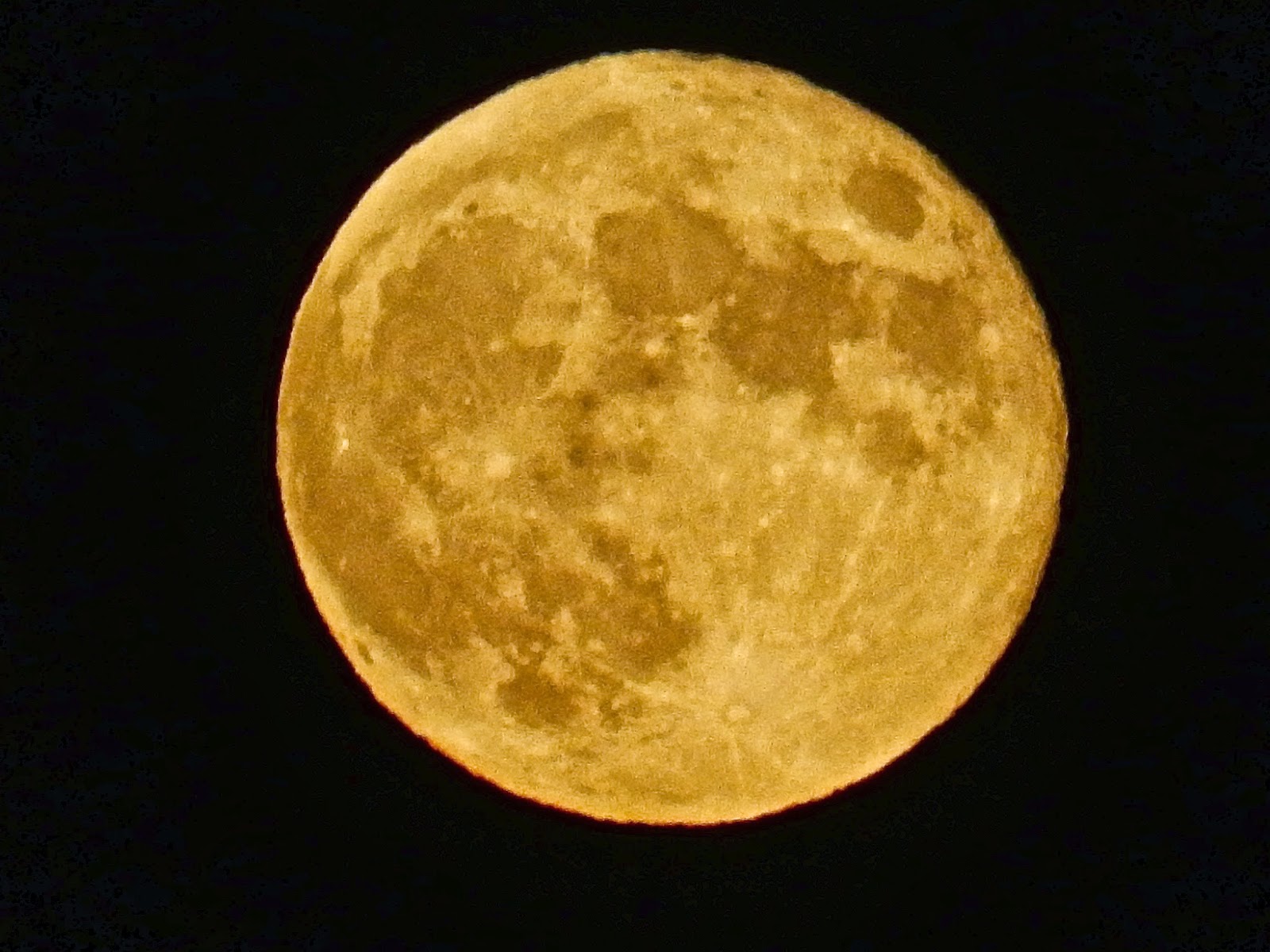 Shooting the moon, the recent blood moon, gave me a chance to tweak around with a new camera.
WEBS 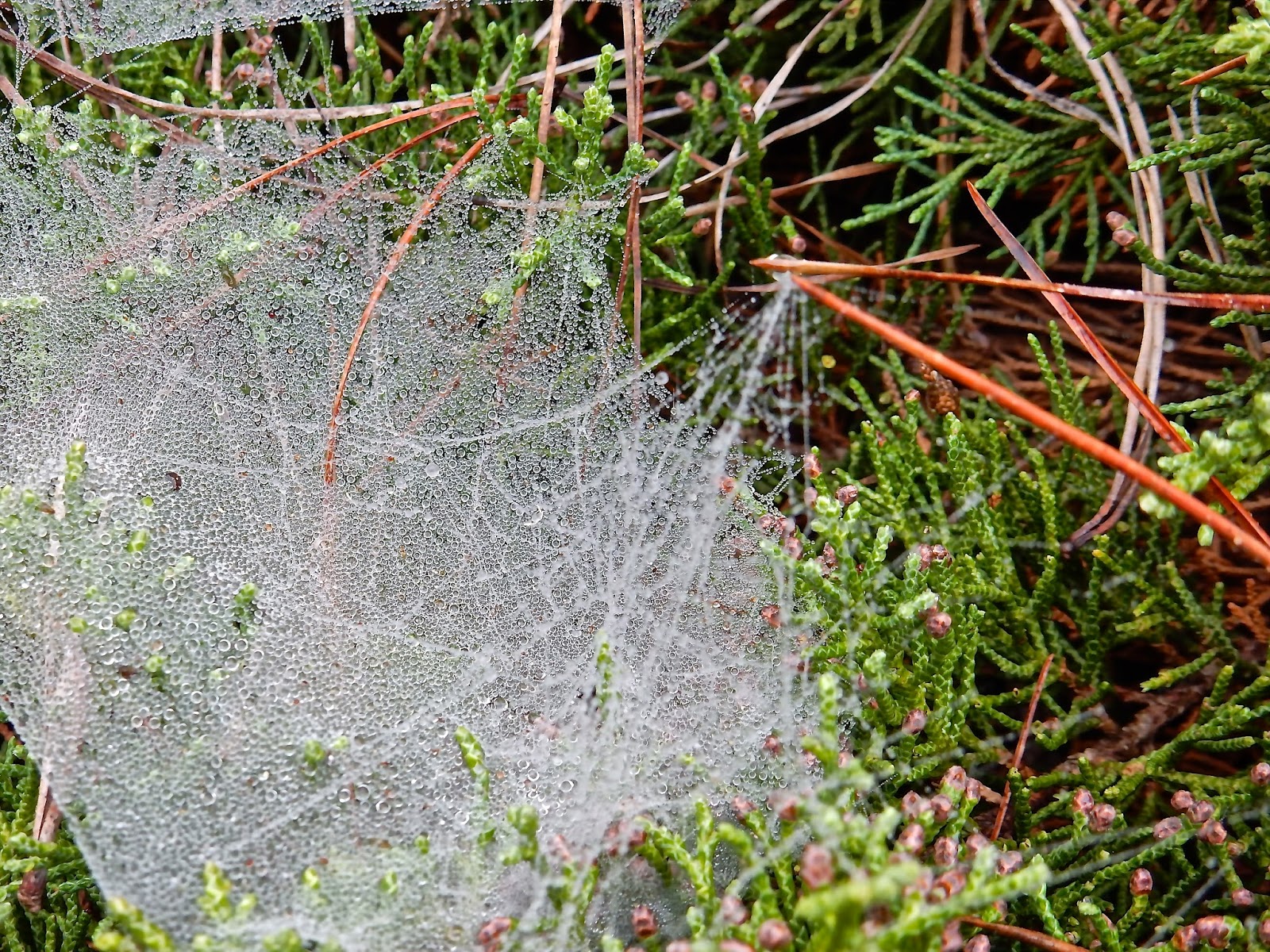 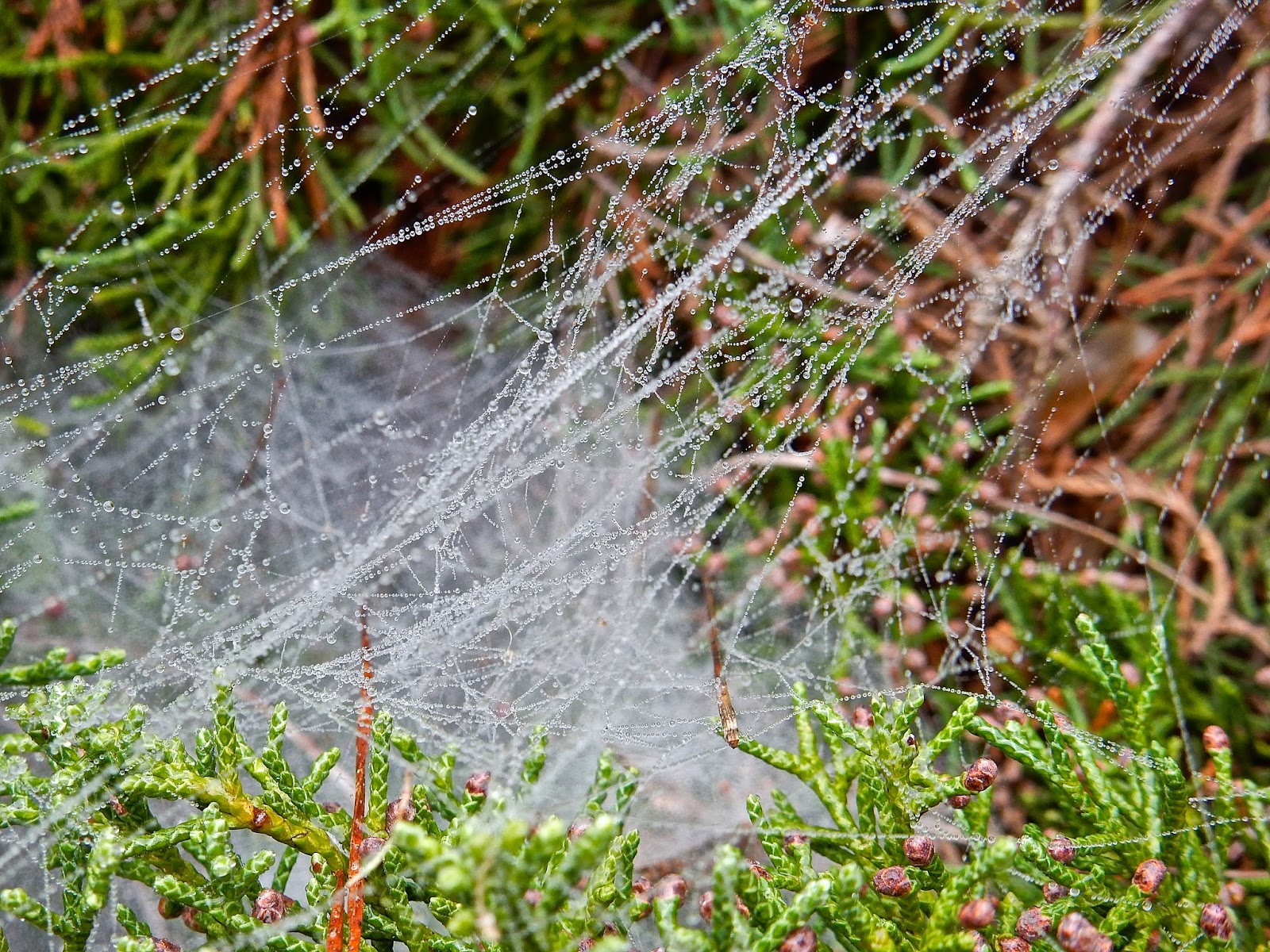 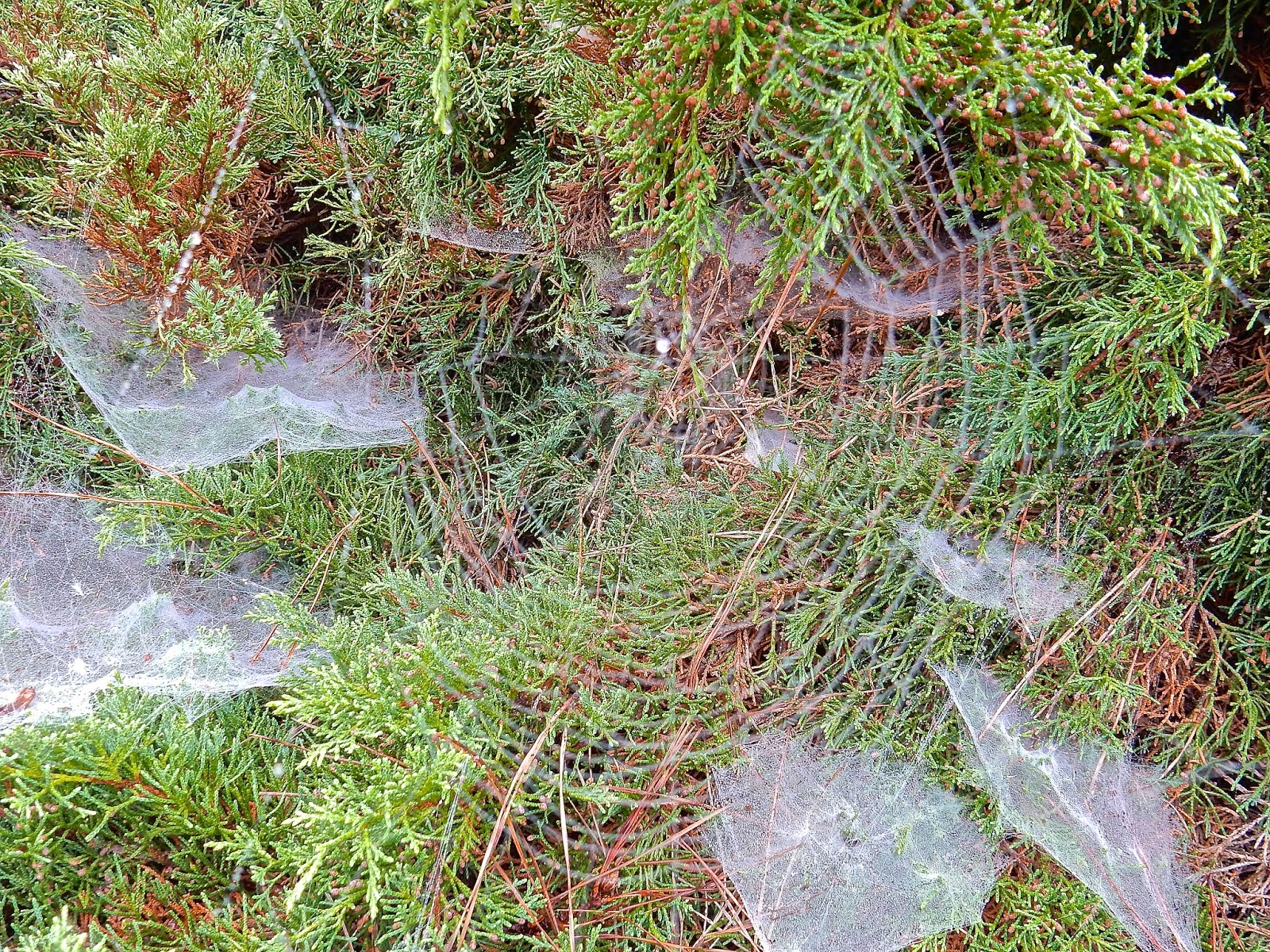 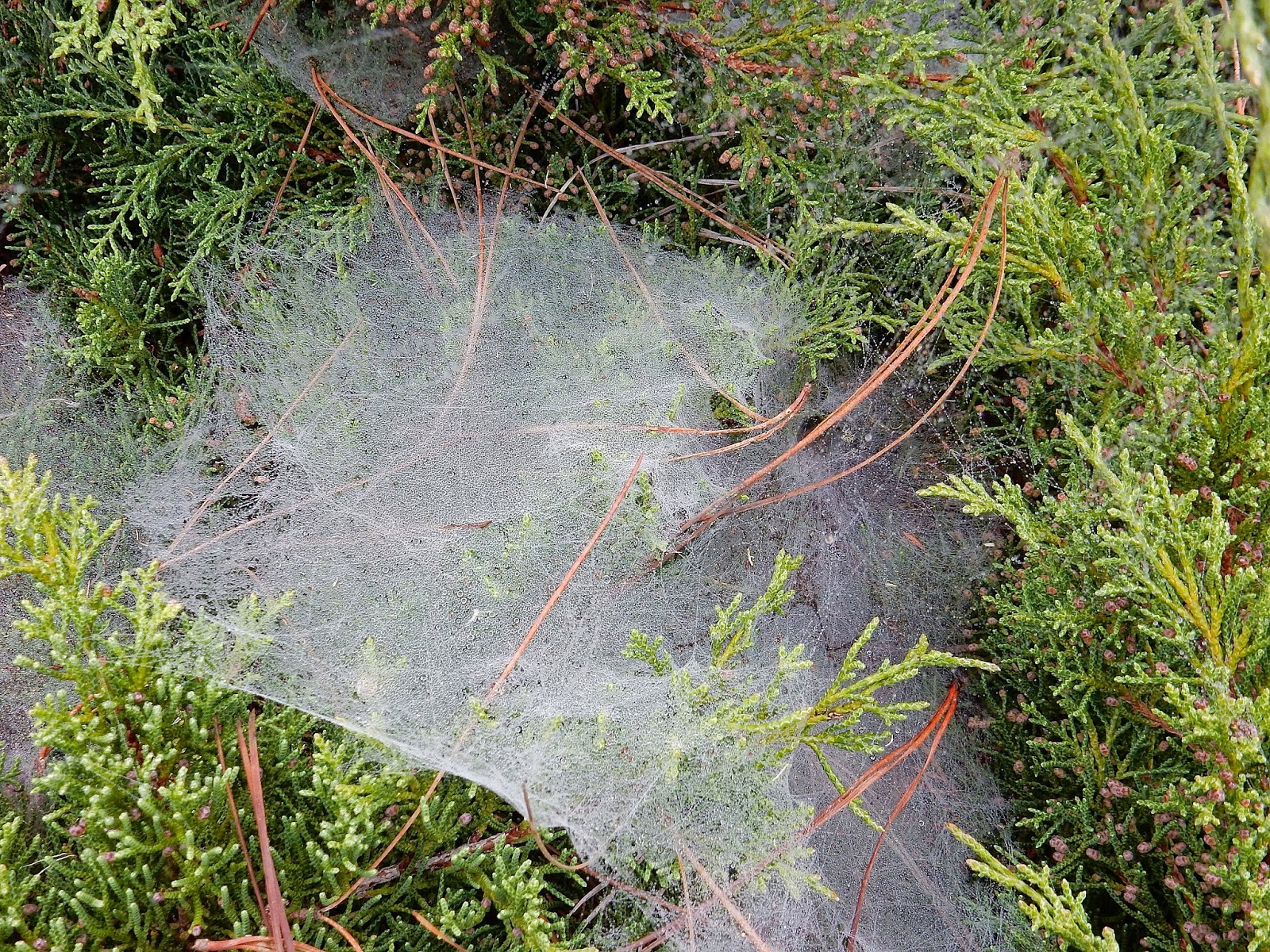 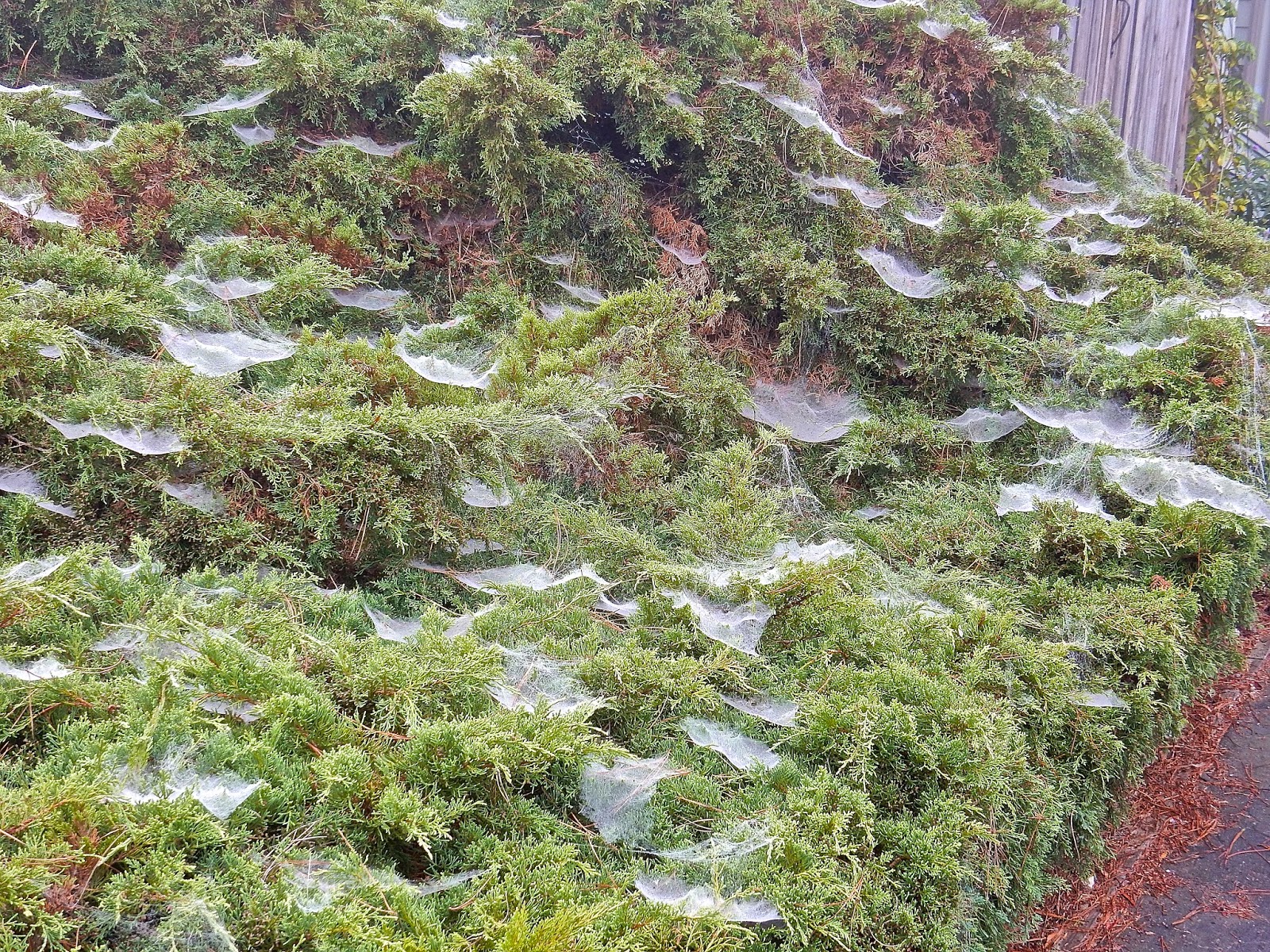 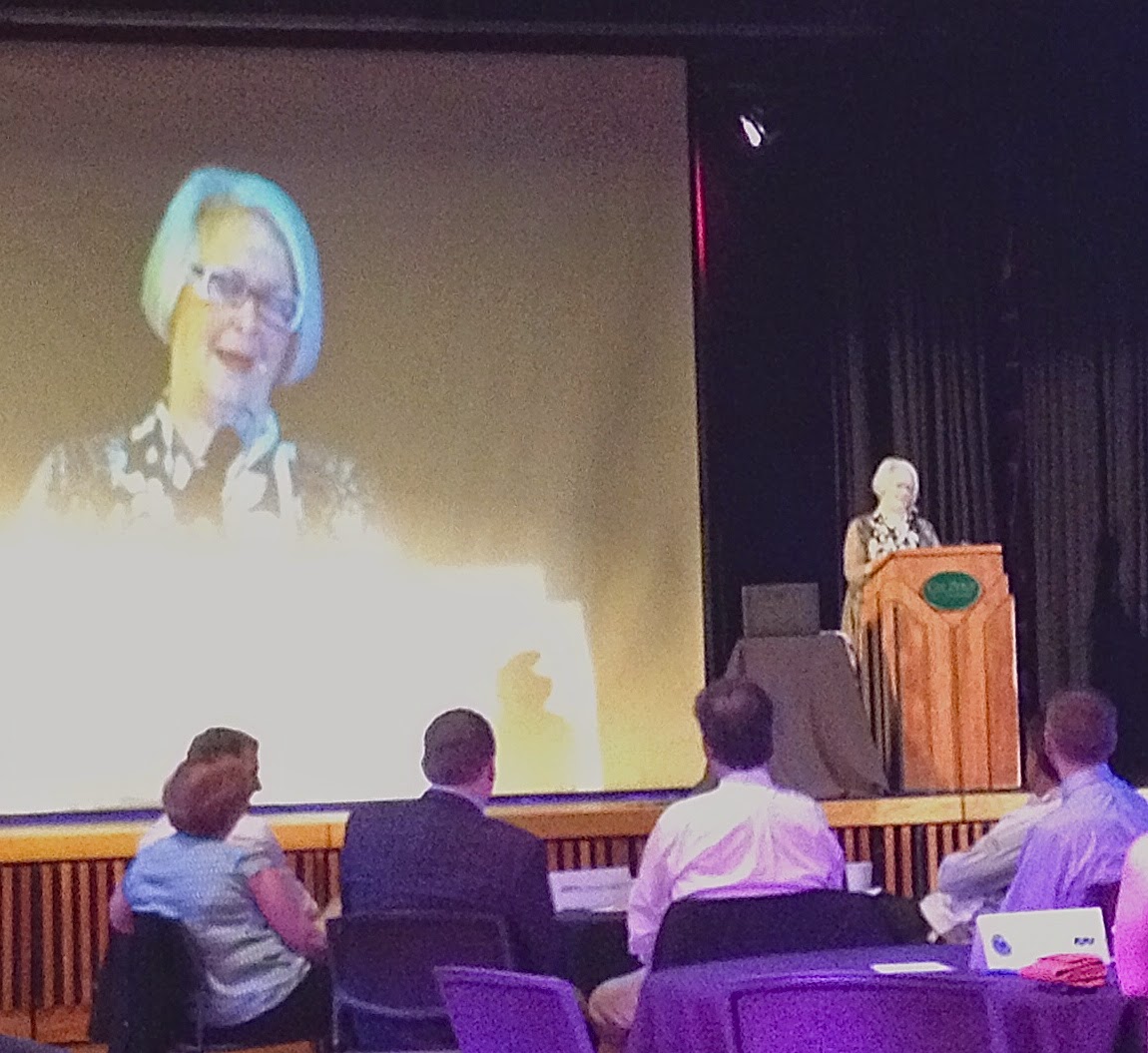 It would have been nice to know this woman's father.
Jim Hayes was a beloved journalism professor who mentored an impressive retinue of high calibre users of words.
Dayle Hayes paraphrased the Norman Maclean novel A River Runs Through It in remembering her father when she said, "There is no clear line between religion and words." She said in her father's life words were religion.
Dayle opened ADVANCING INTEGRITY IN JOURNALISM AND COMMUNICATION-JIM HAYES SYMPOSIUM at Cal Poly.  The impressive  presentations that followed underscored the legacy her father seeded in practitioners as well as the confounding issues that challenge 21st Century journalism and communication.
Presenters included Peter King Director Public Affairs, University of California and former LA Times reporter, editor and columnist.  David Kerley ABC News Correspondent, Judy Muller professor at USC's Annenberg School for Communications and Journalism, NPR Commentator and former ABC Correspondent, Robert Logan of the US National Library of Medicine at the National Institutes of Health, Kevin Riggs former television newsman and now a senior vice president of Randle Communications, Patrick Linn professor of Philosophy and Director of the Ethics + Emerging Sciences group, an author and expert on artificial intelligence and robotics, and Karen Miller Pensiero editor of Newsroom Standards for the Wall Street Journal. 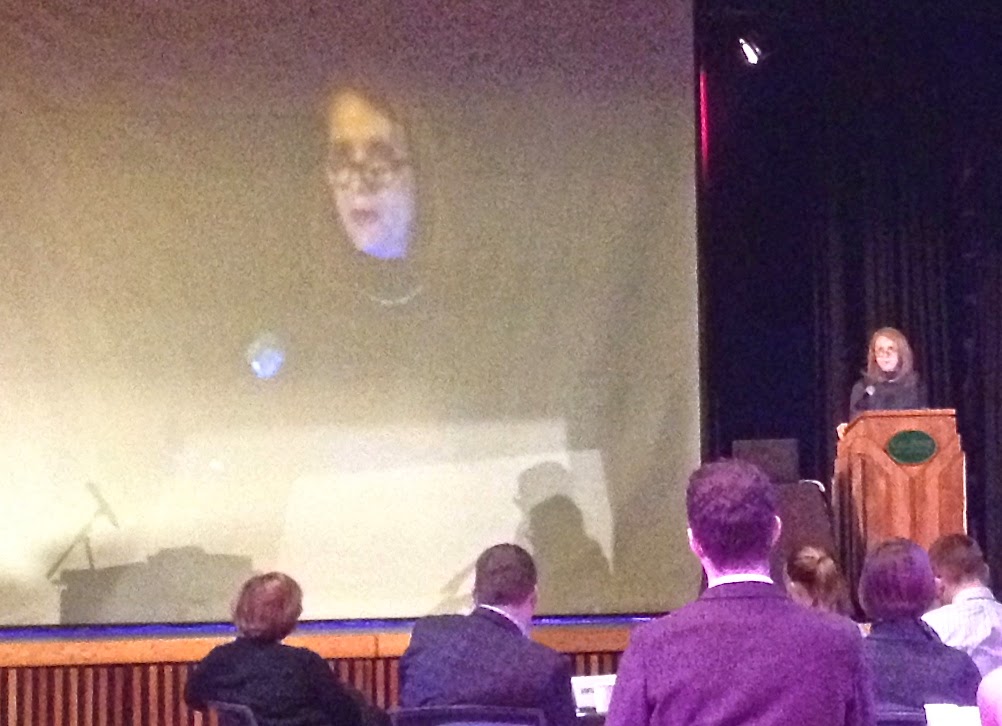 Pensiero's Keynote affirmed the need for ethics and core values even as journalism and communication morph into new methods of gathering and distribution. She eschewed the idea that social media is self correcting.
Pensiero observed that news group "brands" must now co-exist with  the "franchises" of some of their own employees. She was responding to my inquiry about Ezra Klein leaving the Washington Post for Vox Media, the Wall Street Journal's own Walter Mossberg departing for his new Re/Code and Nate Silver's taking of his 535 franchise from the New York Times to ESPN and his own private label. "I see no end to it," she said noting it is part of the new world.
Judy Muller played the iconic clip of Walter Cronkite choking back a tear as he announced the death of President Kennedy. She said that was "emotionalism" in journalism in a 1960's world. By contrast she played clips of Anderson Cooper  angrily going off on Louisiana Senator Mary Landrieu for political back patting as victims of a Gulf storm continued to suffer and as bodies laid on streets. She played a clip of CNN's Jake Tapper being emotional as he covered disorder in Ferguson. I asked her to reflect on the differences of Tapper's emotionalism to Tom Pettit's coverage and that of others during the 1960's civil rights disturbances. She said she thought if they could have used the same live technology they too may have been more emotional.
It's my view the jury is out on that assessment. Everything was different then and those who practiced journalism saw themselves as distillers and handlers of information. Our emotions were not to be a part of the coverage and in fact the entire process was a series of filters.But Muller is correct, emotionalism and commentary are a part of the current delivery, like it or not. Her suggestion for Media Literacy training for students is a wise idea. 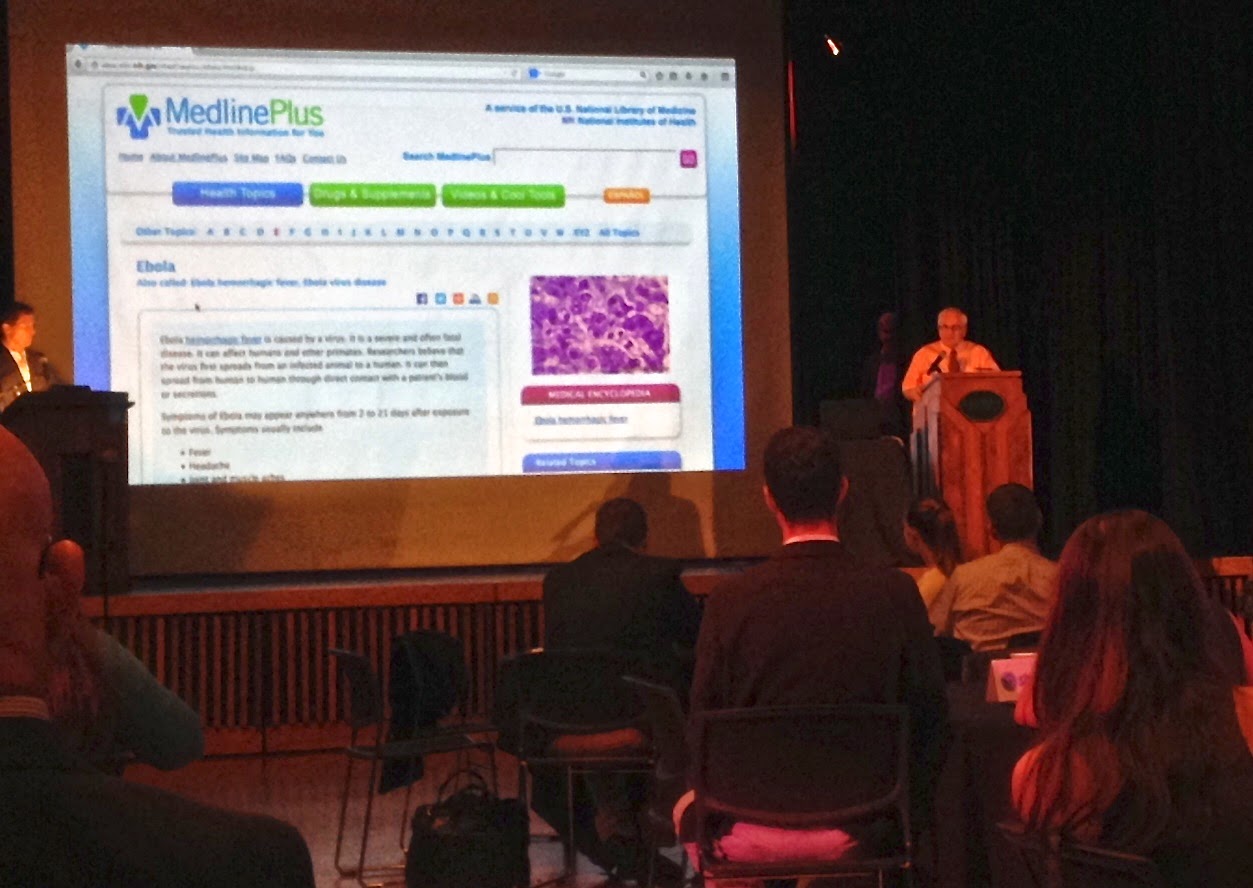 In this time of Ebola and media inspired fear, Logan's presentation dealing with weighing best evidence and providing contextualization was a healthy antidote.
Based on the accounts given by presenters, Hayes must have been an extraordinary "teacher/editor." The audience included alumna and alumni, professionals, a few retirees and students, though the information has value to all who use any form of media.
Ethicist and Artificial Intelligence expert Dr. Patrick Lin, blew a few minds when he put three news briefs on the screen. Each had been written by a robot. It was part of his discussion of Algorithmic Curation, the affect of data mining and organization that you may see in your own life. Here's what I mean. Research a new camera for example and suddenly web sites you visit feature camera ads. Lin said present generation algorithmic writing programs are very effective at correlation but bad at determining causation. Correlation is not causation. An example he cited makes the point. Traffic fatalities decrease when there is an increase in the import of lemons from Mexico. Artificial Intelligence can spot a correlation, but can't make the judgement there is no connection.
Lin made good points in noting that values change with time and we seem to be witnessing what he called a "democratization of news." He concluded that ethics is a competitive advantage.
With more demands placed on journalists-the need to tweet, blog, shoot video, edit and report at the same time, with demanding editors and a hungry news machine to feed-it is reassuring to know the values taught by a fellow who must have been a helluva good professor have been enshrined in what I hope will be an annual symposium on integrity. The world needs it. 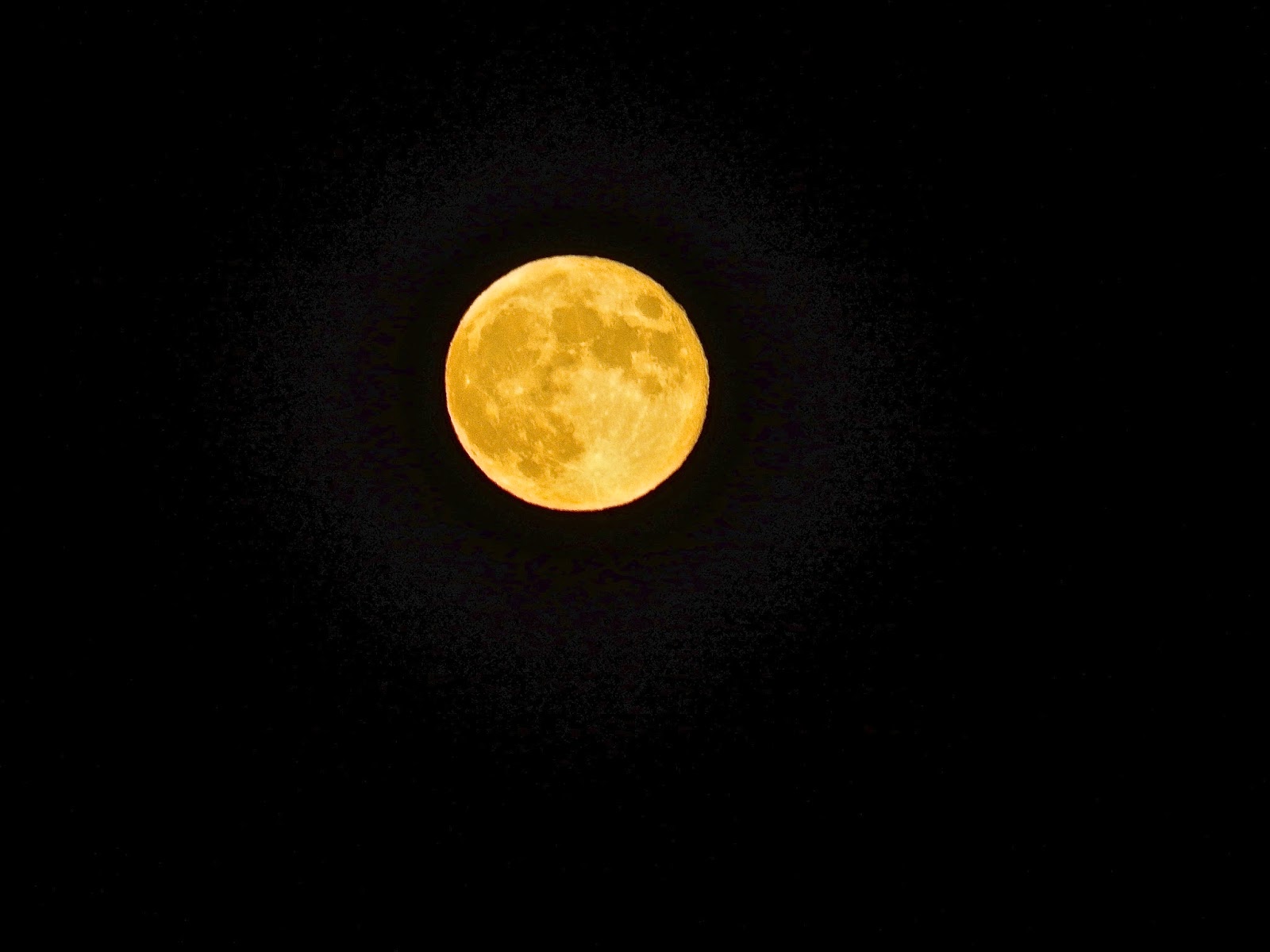