FOOTBALL ABUSE, A JUDGEMENT-BETTER DAYS AT YOSEMITE-DROUGHT TOLERANT AND A THROWBACK

A group of us sat around a table talking about the concept of judgment. I offered that most of us, despite any differences on other matters probably agreed about Ray Rice, the now suspended NFL star seen knocking out his fiancee.
The current Sports Illustrated asks what the Ray Rice matter tells us about the NFL?  It's a huge enterprise, enormously wealthy and feeds a massive audience. At the bottom it is all about money, even greed perhaps.
The league has serious troubles in that many of the gladiators are barely above the rank of street thug. Football programs since their childhood have permitted if not contributed to the condition. Schools tolerated only a pretense of education so star talent could play. Young men learn athletic skills but may know little about civility and how to be mature men. Character is rarely coached or taught. Strength, power and athleticism is valued. Off field violence and run ins with the law are all too frequent. The NFL has been woefully negligent in caring about much more than the big show and the big dollars.
I know good men of up standing character who have been NFL players and even stars. There are many and some are truly extraordinary. Tony Dungy is a man I admire, respect and hold up as a role model. But all of the good men in the league, be they coaches, players or team executives, have less influence than the real power-that exclusive club of team owners whose primary interest is money. The Commissioner is their employee. They make the rules. They own the players. Sometimes they bilk money from cities to build huge stadiums where they can earn many more millions. They have extraordinary control and they can and should do a better job of riding heard on their combatants.
A small little personal experience is a window into the owner run league. When the league can tell a local television station where they can and cannot shoot, when they can and cannot shoot, even in a municipally funded stadium-public space, even if it is not football footage, it demonstrates the autocratic power they exert. So the democratic balance of power should be such that society can tell the league to get serious about criminal activity. They can control their fiefdoms, but the public can demand enforcement of regulations that respect and honor public law and statutes.
There is news the owner of the San Francisco 49'ers suspended a team broadcaster for comments that could have been interpreted as insensitive. I think he just made a simplistic or even stupid comment about women who are victims of abuse. It is not just a matter of a victim speaking up as his comments implied. I don't think the radio announcer wanted to come even close to saying he condoned the abuse, but his comment underscores how little the public knows about the psychology and pathology of this kind of abusive relationship.  Still, he's out for two games. Yet you have to wonder about players, who are still playing, despite previous offenses of spousal abuse or criminal behavior. It's probably easier to penalize a broadcaster than bench a star.  Who's going to put the most money back in the leagues pocket?
So, yes, there is a lot opportunity to judge. A judgement most of us have made is that if there had not been video of Ray Rice knocking out his fiancee, he'd still be playing. What does that say about how serious is the league?
DROUGHT TOLERANT 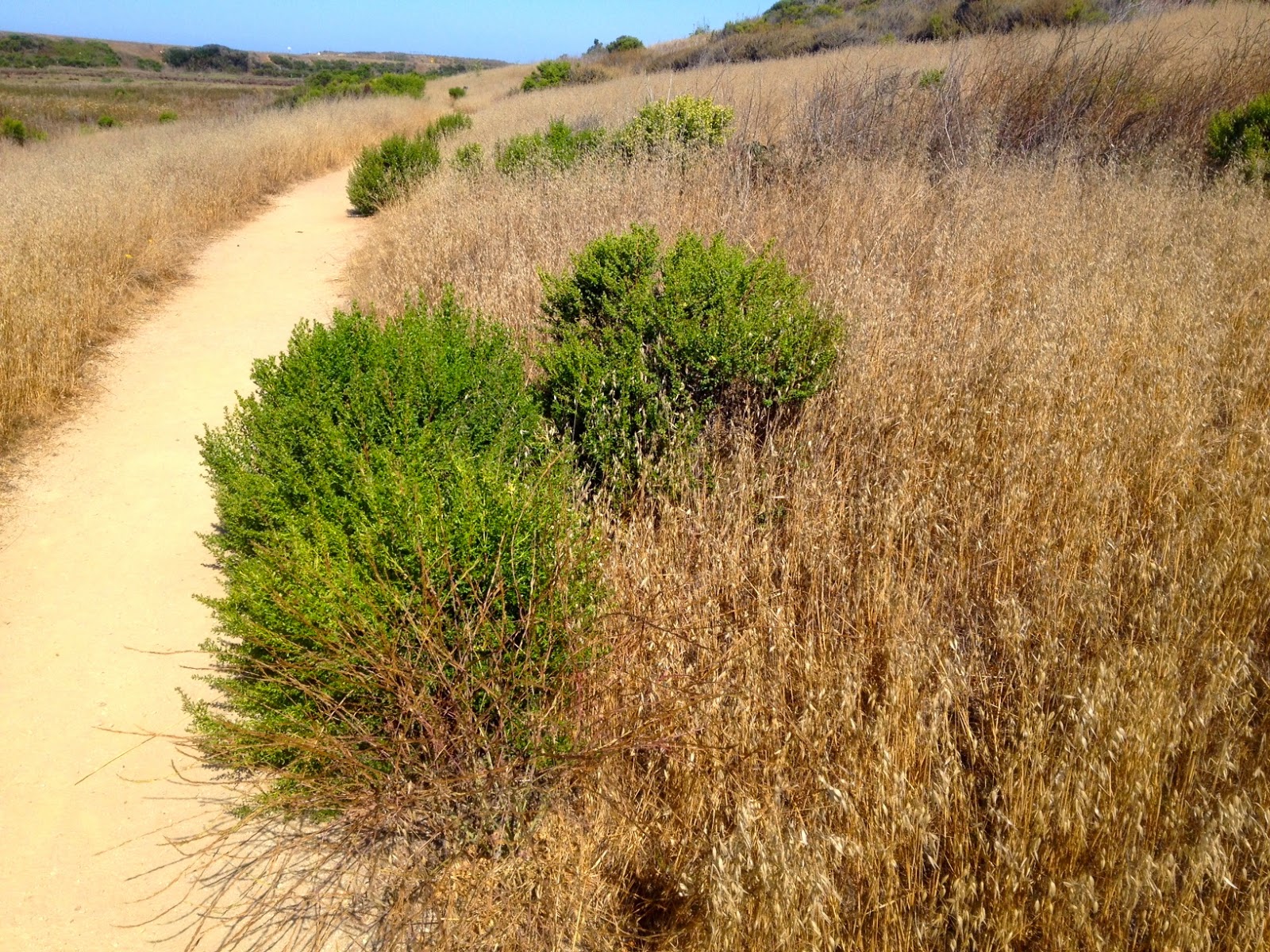 It is a fascinating mystery how Coyote Brush can remain green when all around it withers and browns in drought. Also called Chaparral Broom it is not only drought tolerant, it's a nectar source for wasps, butterflies and flies. 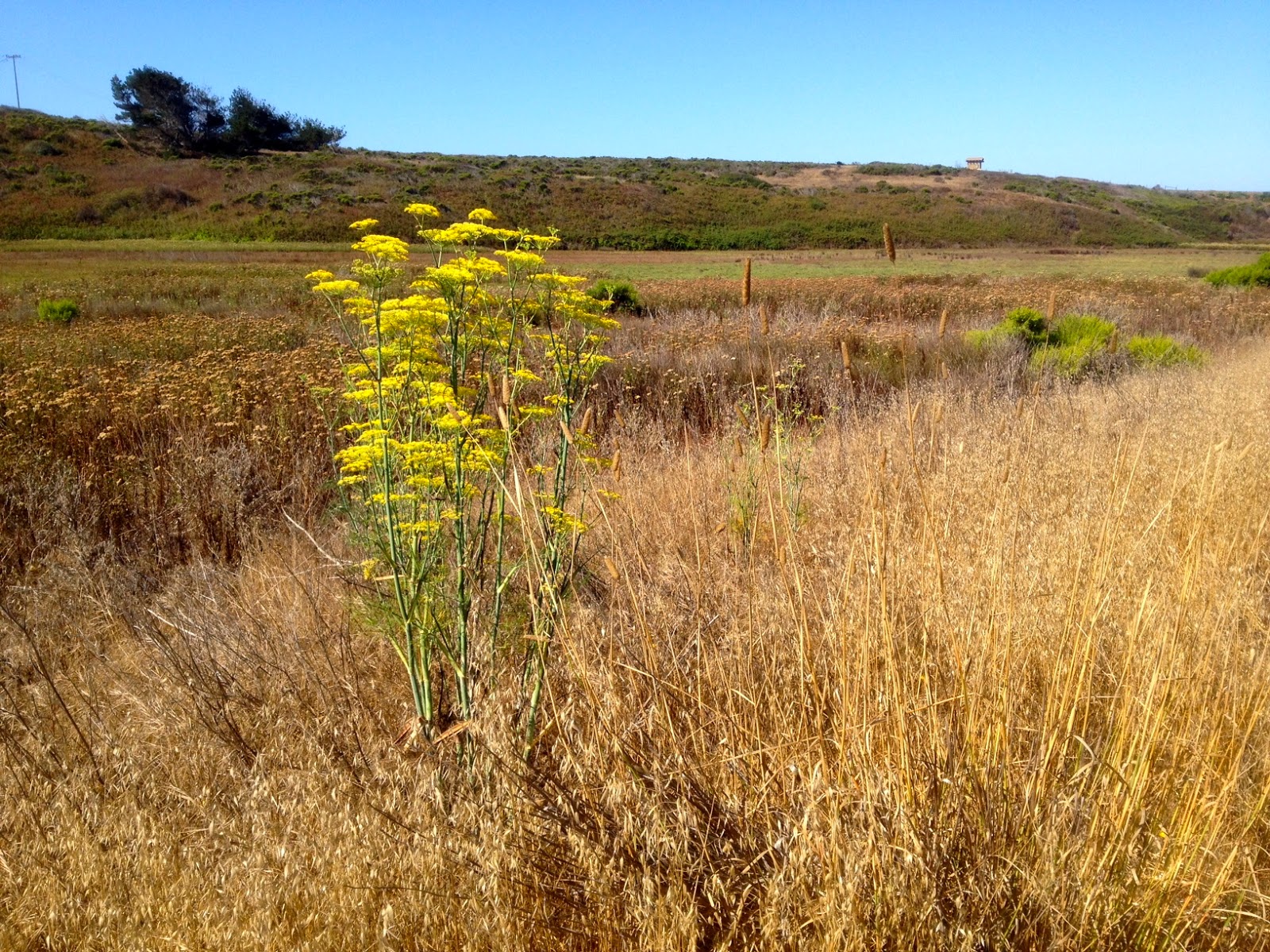 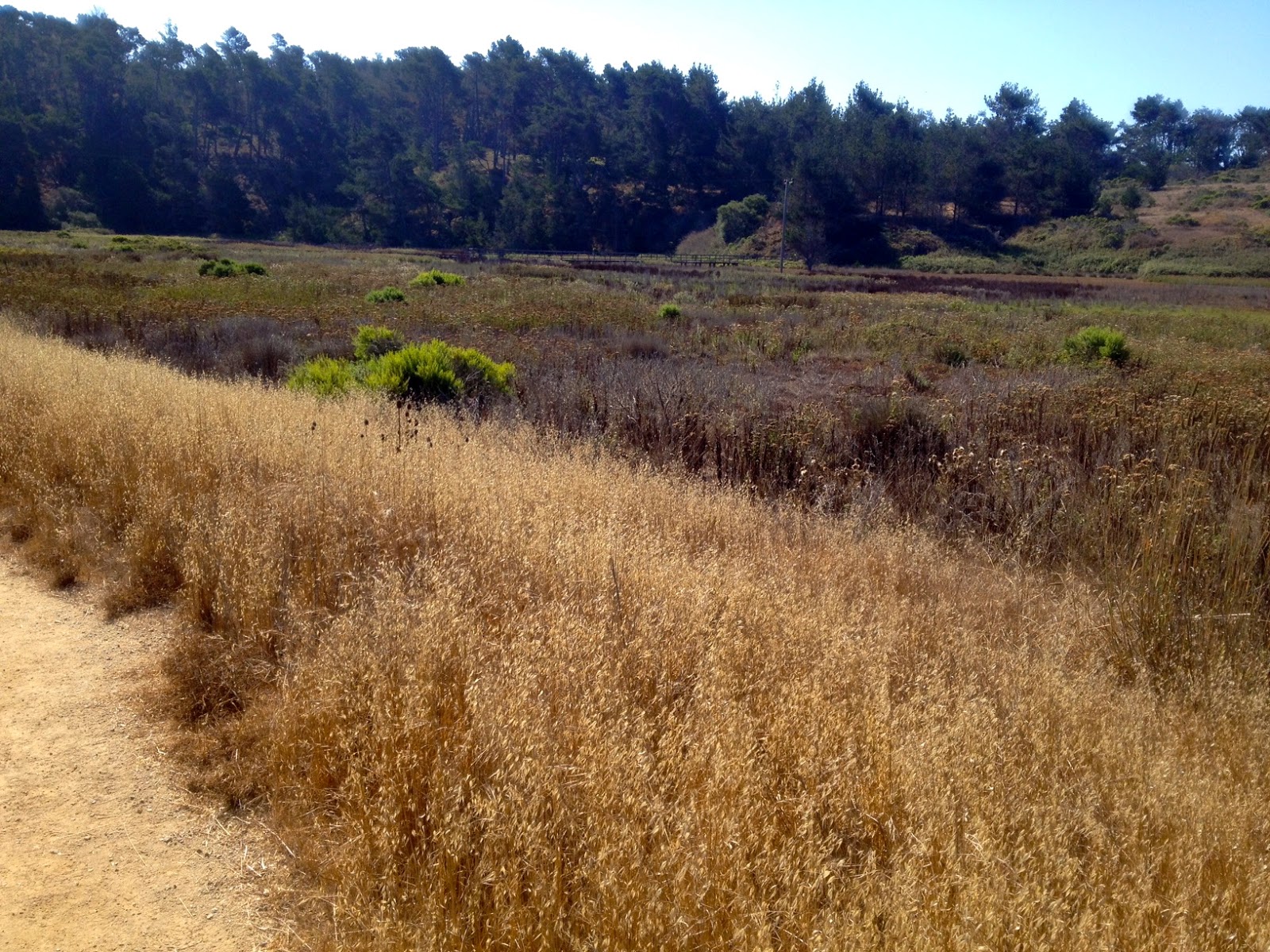 We've hiked past this plain when its nature as a wetland is apparent. Life here awaits rain. 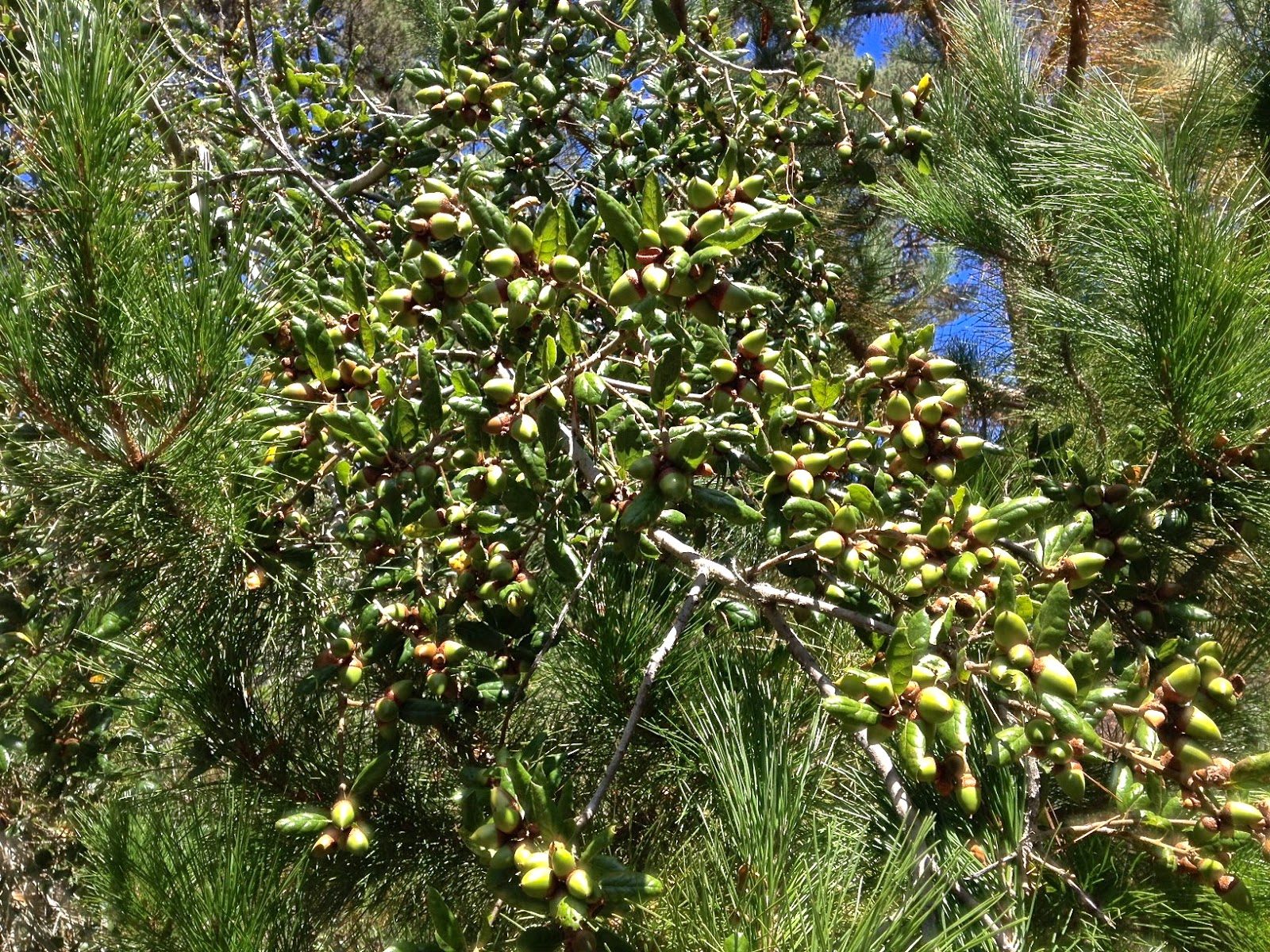 A lot of nature seems stressed by the third year of the California drought.  The owner of this Live Oak said he's never seen it produce acorns, let alone such an abundance. 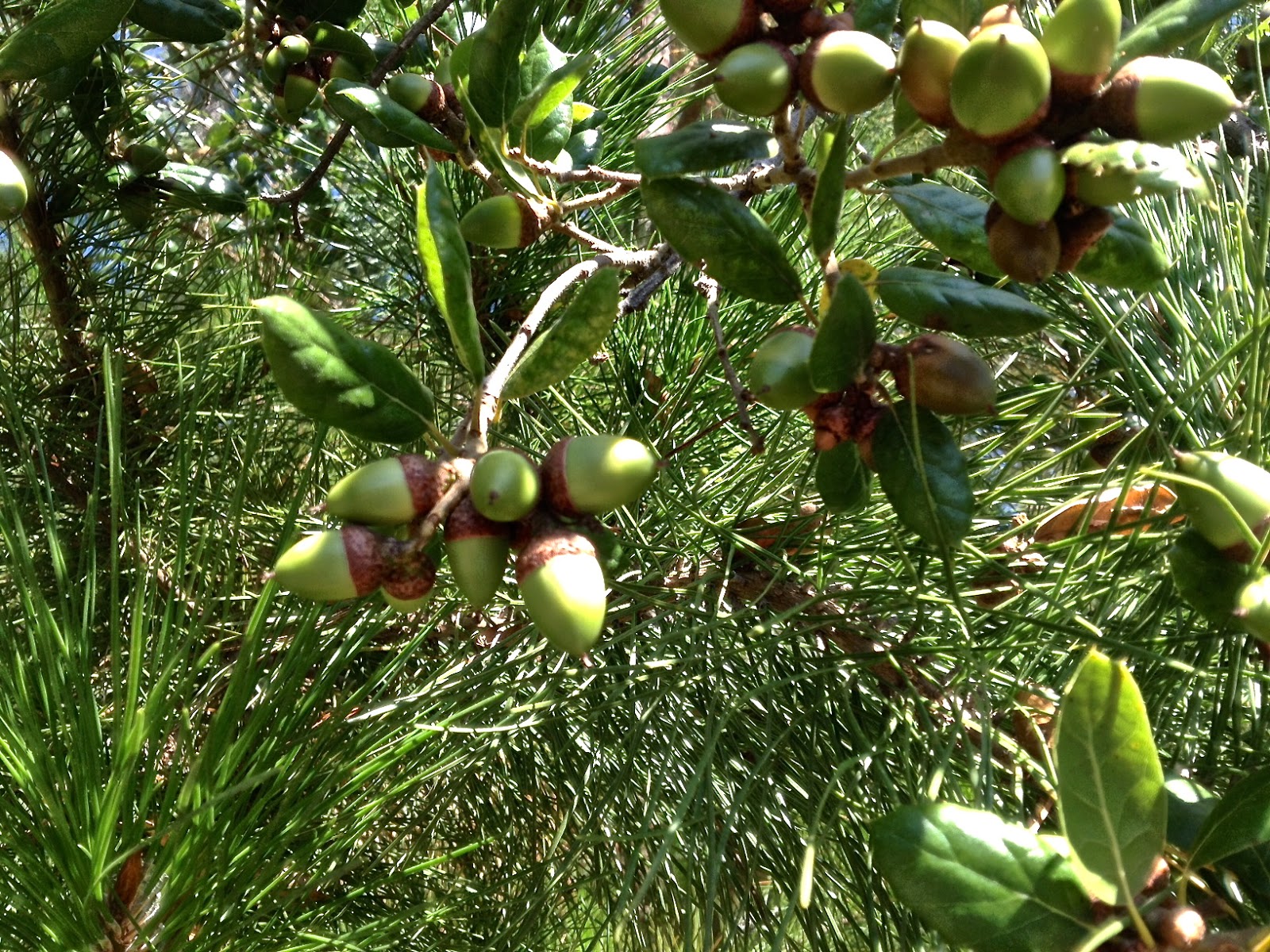 Those who know say it is a type of self protective response. 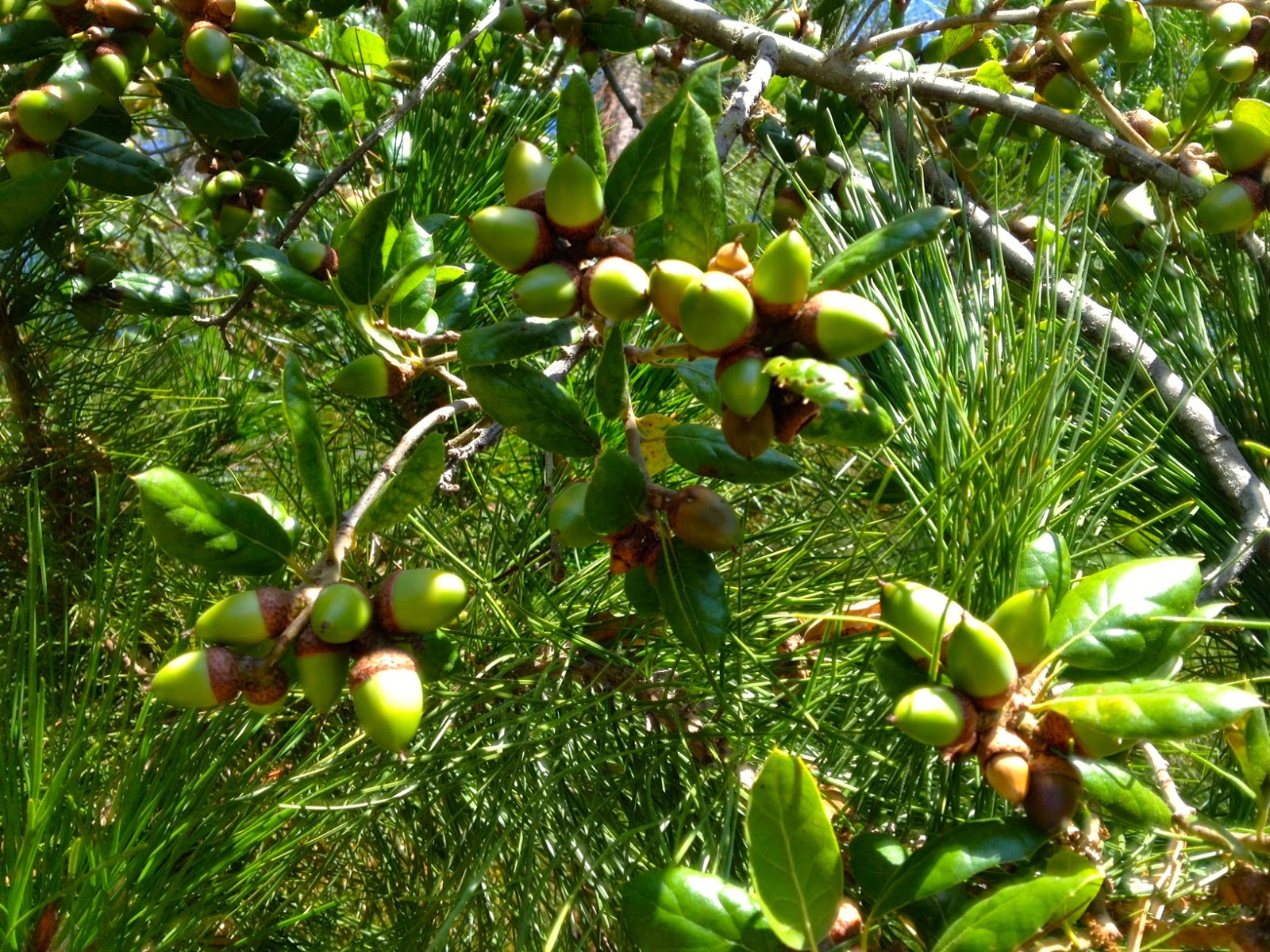 Dying Monterey Pine will often produce an abundance of cones, apparently as a kind of last hurrah. So many rhythms and subtexts in nature. 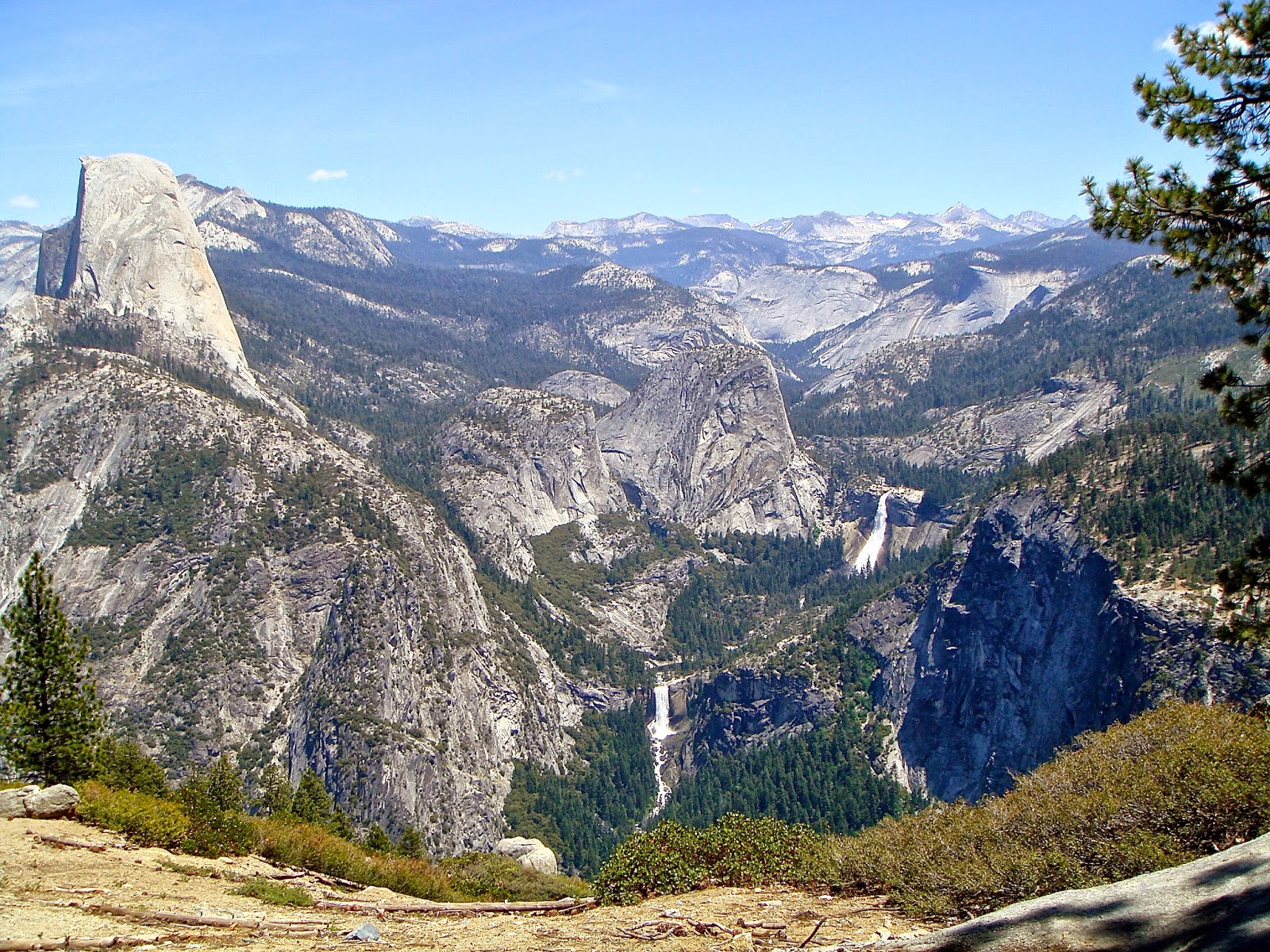 Revisiting shots taken on a trip to Yosemite-trying to get my mind around the fire. 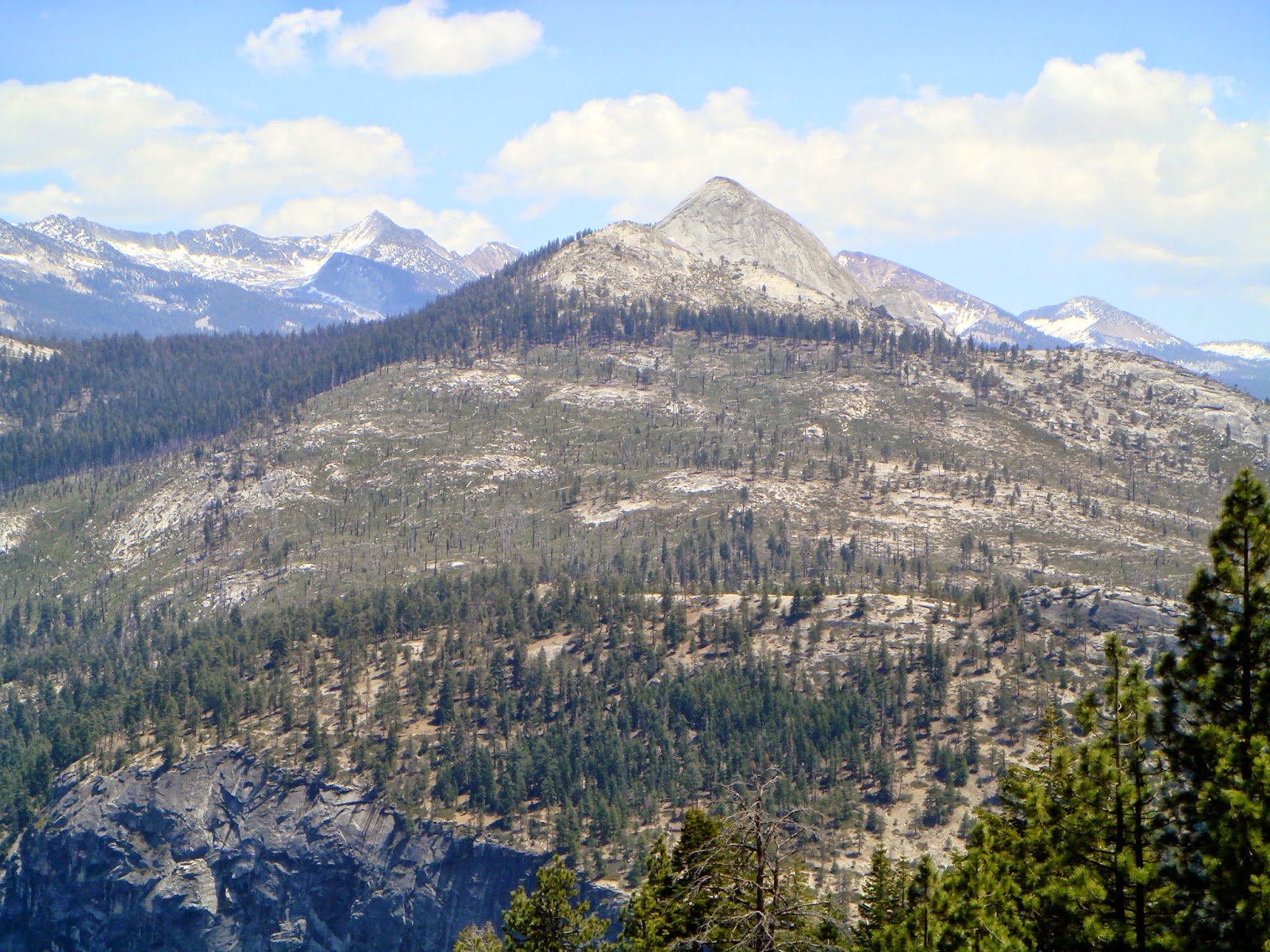 More than a hundred people were helicoptered out the area near half dome. About 4,500 acres have been burned. 400 firefighters and 8 helicopters have it about 10% contained.  Hoping for cooler and damp weather to help. 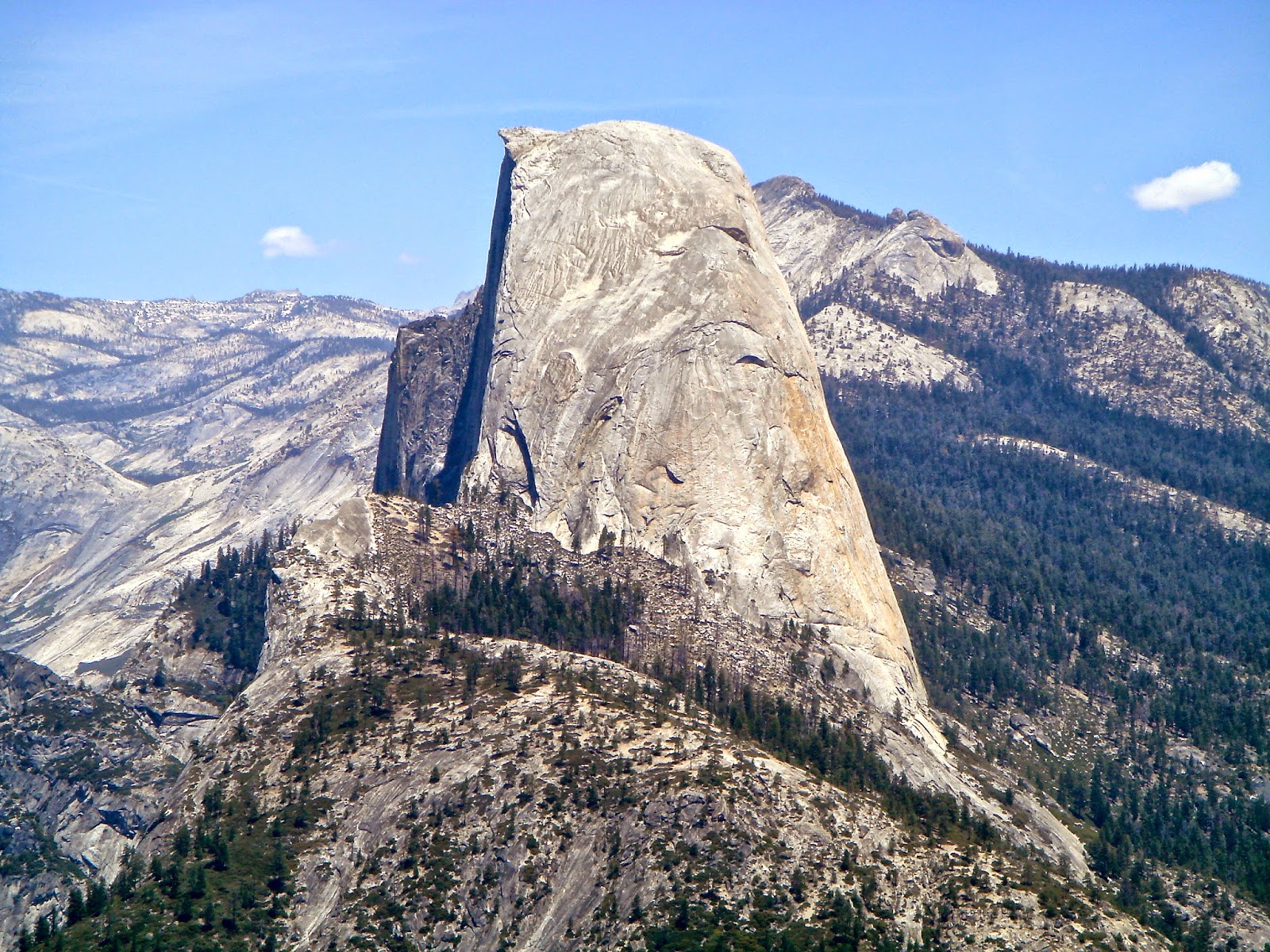 Those who helicoptered from here have adventures to tell.
THE THROWBACK 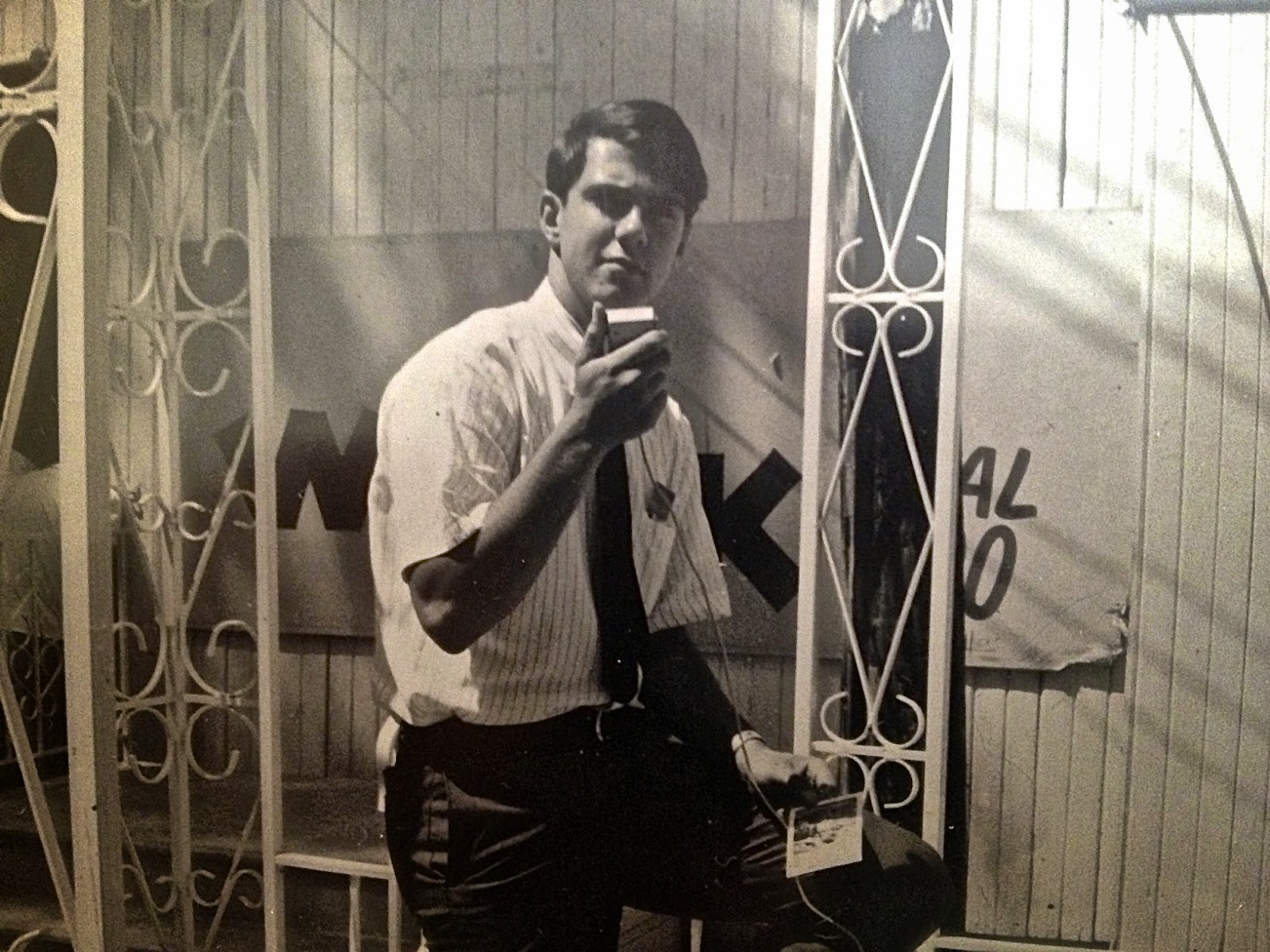 1965- On assignment, covering a county fair. That square microphone and cable?  They connect to a reel to reel recorder, now ancient technology. I was a college freshman, working on room and board. This is the first "promotional" shot I participated in. That's a polaroid I'm holding, probably the photographers test shot.

See you down the trail.
Posted by Tom Cochrun at 11:59 AM