OF VACATIONS, MAKING OUT AND THROWBACKS

IT LEFT ME WOOZY
Vacation season brings to mind summer romances and one in particular, the year of my first "make out session."
Susan Hall was her name, a bright smiling faced blond from Pontiac Michigan. She was angular and her body was beginning to suggest her coming womanhood. I was changing as well, getting a little taller while hormones were switching on.
We were typical 12-13 year olds. Susan was ahead of me in romantic maturity. Until that summer I was content to spend 18 hours a day playing ball, but when I saw her on the sun kissed  beach of Lake Michigan, my brain and body gave me signals I did not understand.  Suddenly romping in the surf with my brother didn't seem to be as much fun as getting to know that pretty girl who continued to smile at me.
I had to overcome a shyness, which she was anything but. It was a great match. The year before I would have been bored silly just to sit and talk, or walk the beach, or into the village for ice cream or sodas. I couldn't quite grasp what it was that I was feeling. After a couple of days we were walking hand in hand, laughing and I found myself making more conversation than I ever did with my buddies back home.
She suggested we take in a movie.  I remember my mom's wide eyed and mouth agape reaction when I told her of our plans. Dad was all for it.  He even gave me an extra buck so I could buy her ticket and a snack.
My younger brother John, who seemed to have been born older and more advanced than me, spent the afternoon of the big date telling me how to proceed.  First you had to put your arm around her shoulder, or hold her hand and as soon as the lights in the theatre dropped, you make your move. I had kissed a girl before, furtive gestures  in playing spin the bottle.  Frankly those games were always a bit embarrassing for me, up until this summer I guess.
I met Susan outside her cabin and she was radiant. Her blond hair shinning in the evening sun, her smile big and cheerful and she smelled so good. Until that moment perfume was the often obnoxious aroma of aunts, or older women. This scent however was something different.
We held hands and seemed to walk so our arms and hips were in constant contact.  We settled for a place in the back of the theatre and in what was the boldest and most brazen move in my life, I slipped my arm around her shoulder. She responded by putting her head on my shoulder. Her blond hair, so soft on my face, had a wonderful aroma and there was that other intoxicating scent around her chin line.
Cupid was on steroids that evening and our young teen hormones on full alert.  We could not get enough face to face time, cheeks against cheeks and lips exploring lips. There were moments when I feared I would suffocate, but I was bound not to stop. Eventually her tongue opened an expedition to my mouth.  My brother had told me about this. Until a few hours before I had no idea such a thing existed, but now I was fully on board with the concept and a willing experimenter.
I have no idea of the film that was playing that evening-none. I was disappointed though when credits rolled and the house lights came on. We walked home, arm in arm, her head on my shoulder. We stopped a few times and leaned against a darkened building and continued our kiss fest.
All too quickly we were back at the beach and nearing her cabin. She stopped, reached into her purse, handed me an envelope and told me not to open it until I got home. A final kiss, more quick than the others, she smiled and went up the sandy walk to her cabin.  I just drifted home.
Years later I would come to understand  how I felt in that moment to be a kind of intoxication.  My body seemed to be agitating for something I was not sure of. It was a great feeling, driven by a desire simply to be with her.  Mom and Dad were sitting in the cabin playing cards.  Brother John was the first to speak-"Did ya make out?"
"That's enough of that!" Dad said turning to me as I stood in the door. He gave me a wink. I'm sure it was all over my face, along with her lipstick and perfume.
These were new feelings for this kid. Kind of like butterflies and an unquenchable longing. I was woozy. Then I opened the note. Her picture was the first thing I saw, with her name and address written on the back. Inside was a folded note. They were leaving in the morning. She said she had fun.
In that moment I was sure I would save all of my feelings for her. I would find some way to get to Pontiac Michigan.
We spent a few more days at the shore and I felt a kind of emptiness. John peppered me with questions, which I never answered to his satisfaction because I didn't want to say anything to violate that special experience.  Back home I drifted back to endless games of basketball, but when school began I had a new interest in my female class mates. Thanks to Susan, my male ego had been exercised and I thought  of myself as "experienced."  At 13 that is a big deal.  Thanks Susan. You gave me a first and an initiation into romance. I have always wondered what life provided you.
Do you remember your first, or a summer romance?
VACATION SCENES 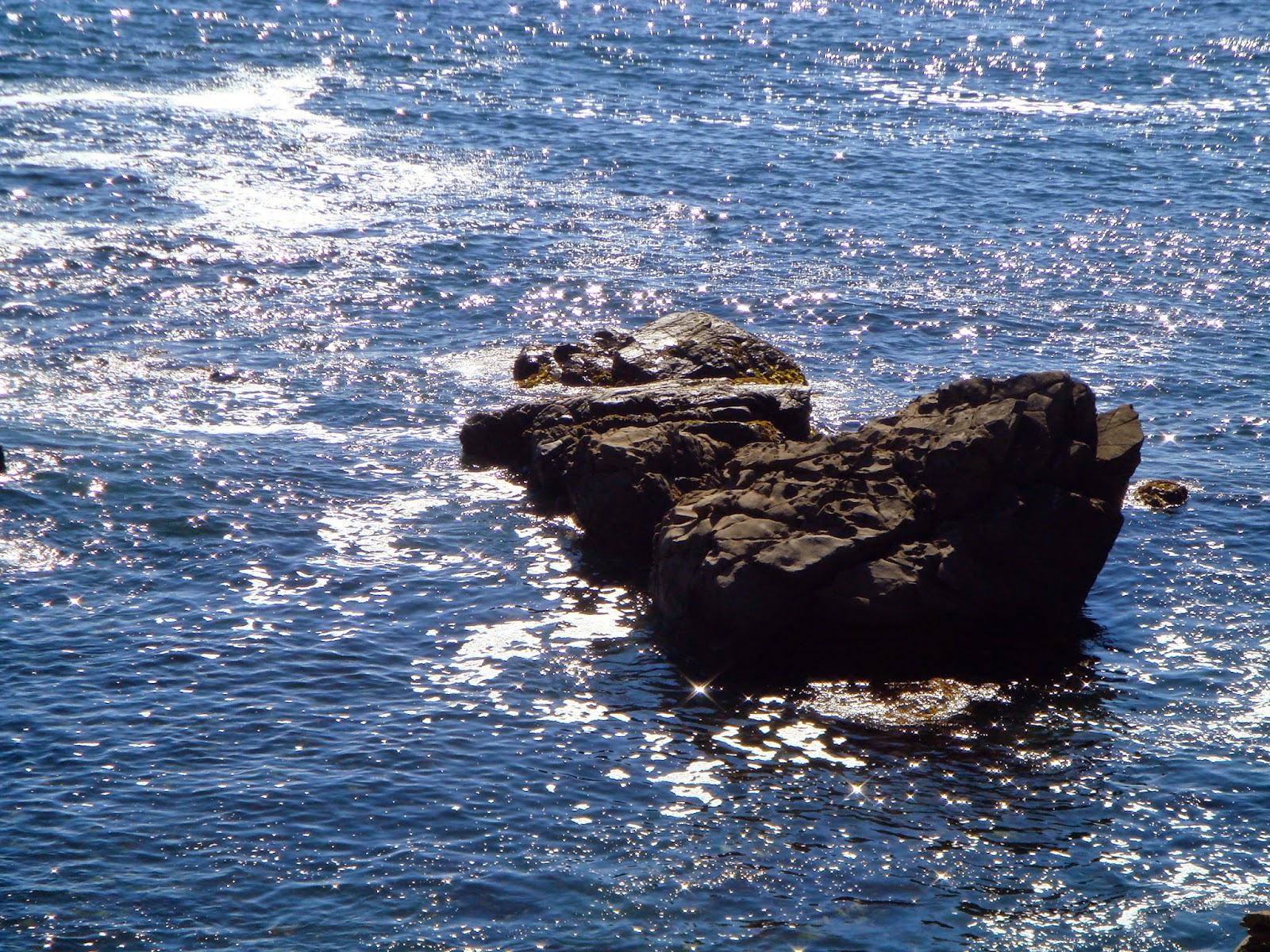 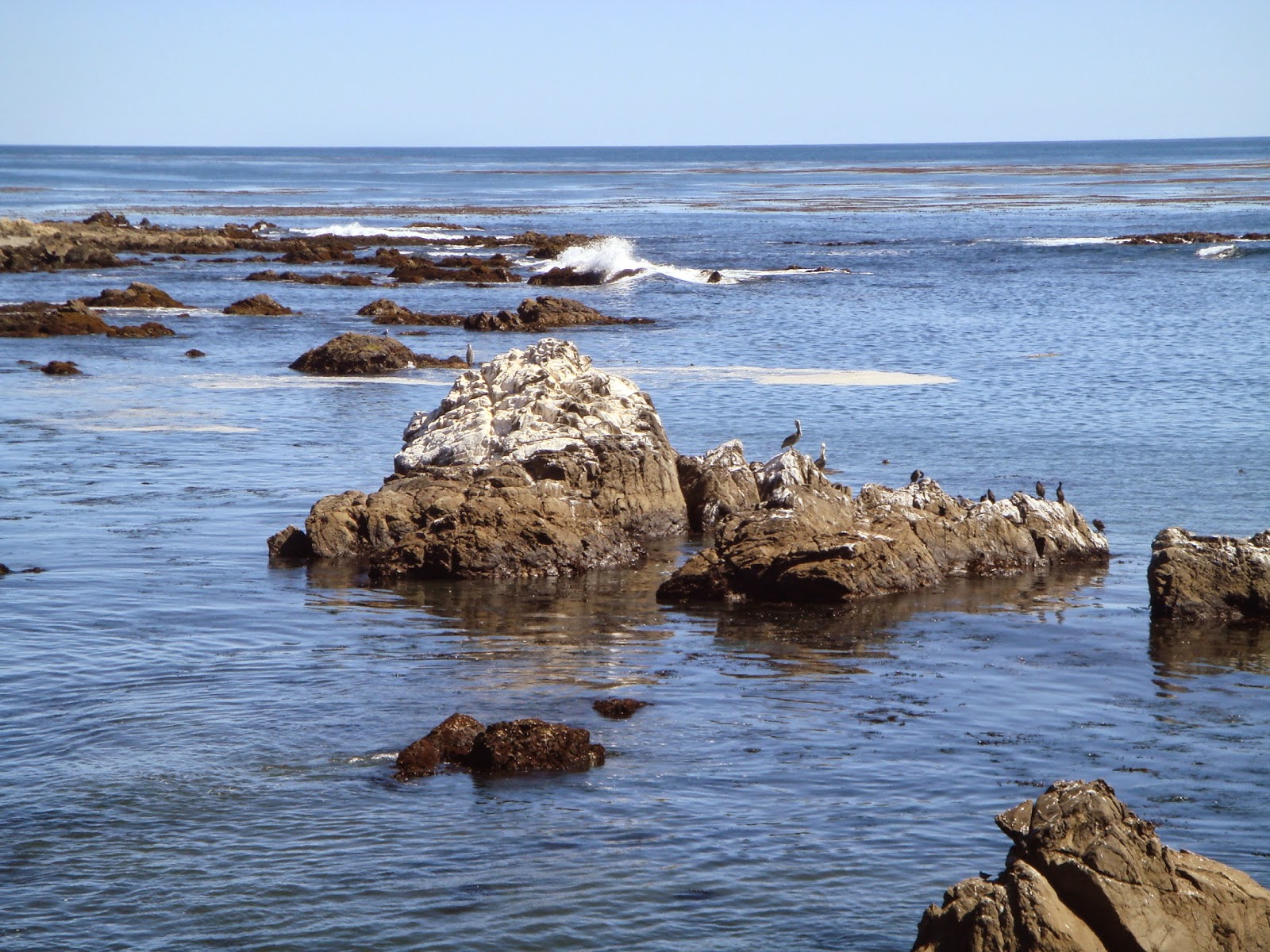 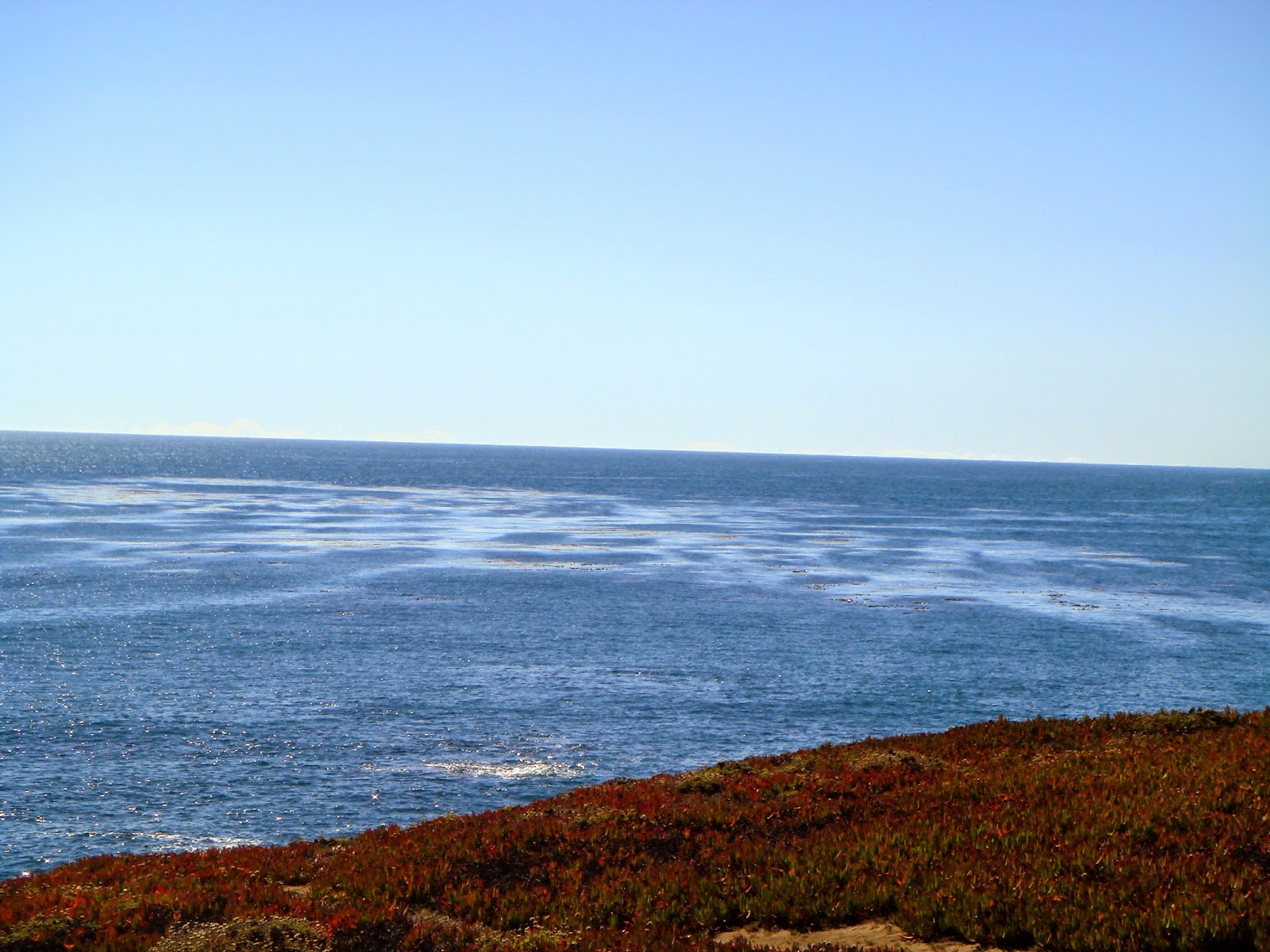 Do you know what creates these patches of calm and different texture on the Pacific? 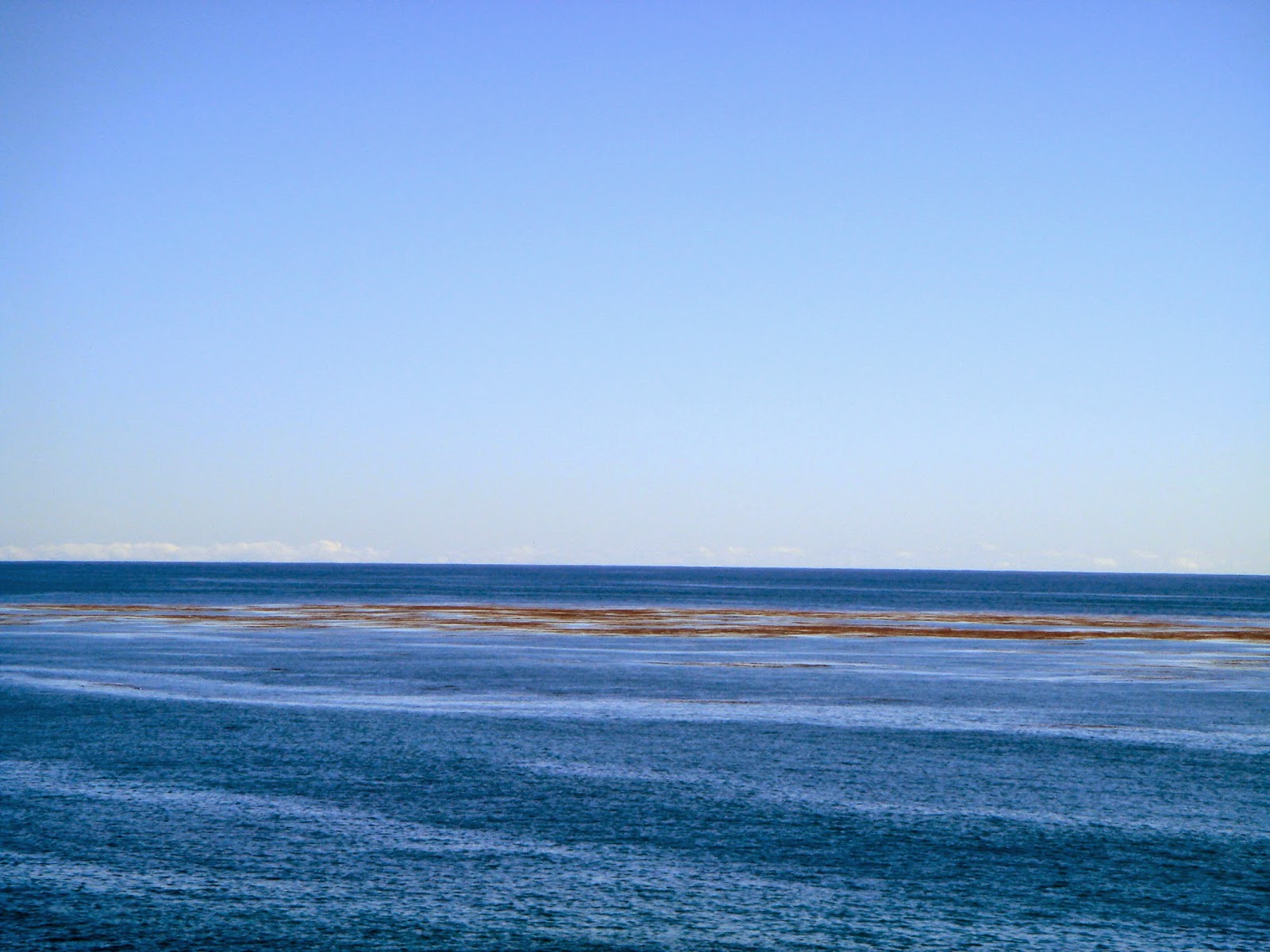 My hunch is that it's a kelp bed, not yet to the surface, as these are.

A WAY BACK THROWBACK 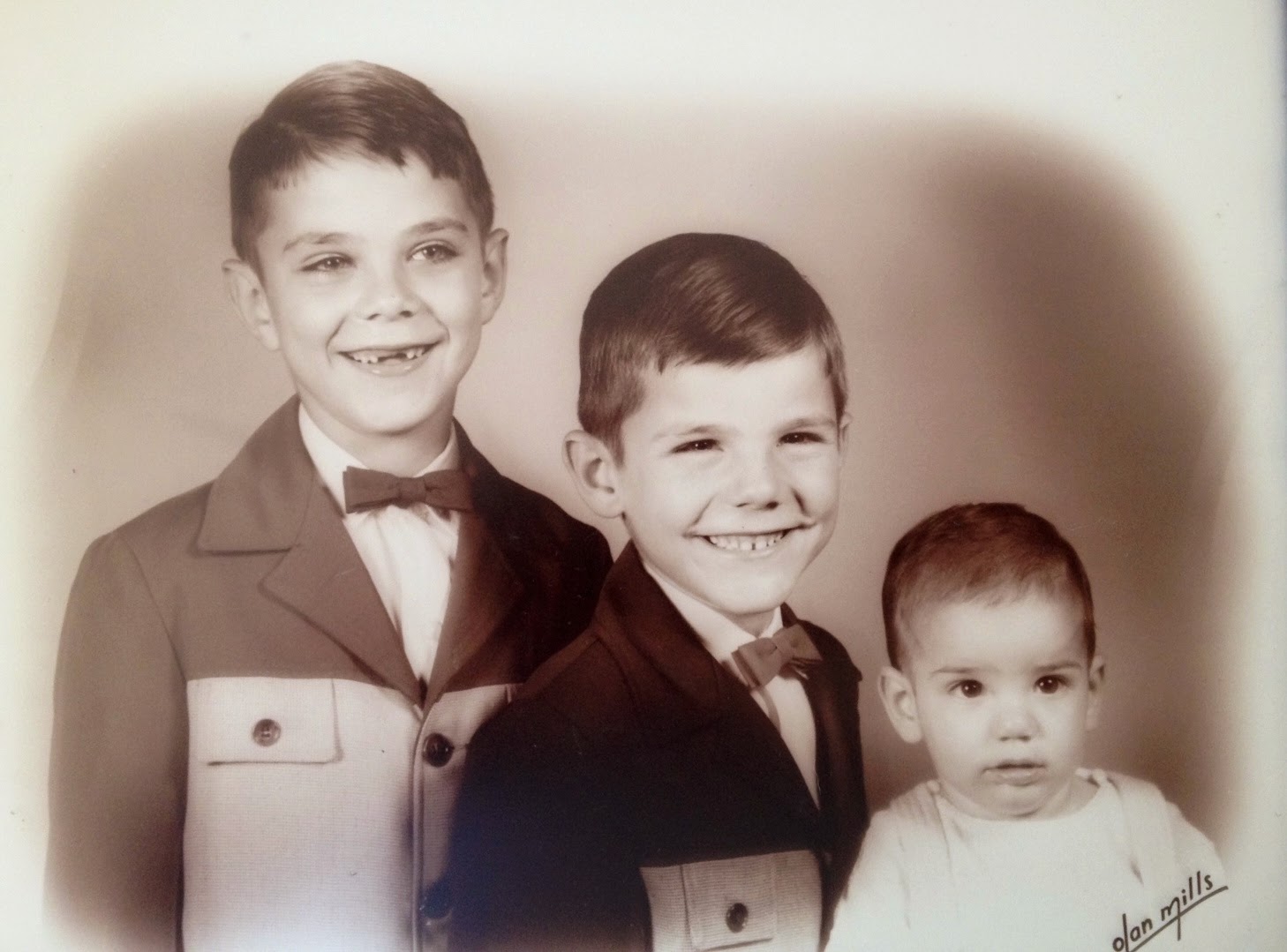 This was one of my mom's favorite photos.  1954. Tom is the toothless older brother. John is the firecracker in the middle and the baby is little Jimmy.