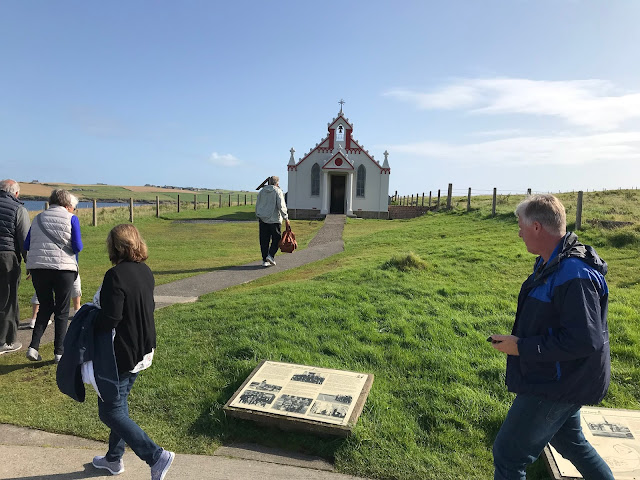 At first glance you'd think it's a scene of people walking to a picturesque little chapel. 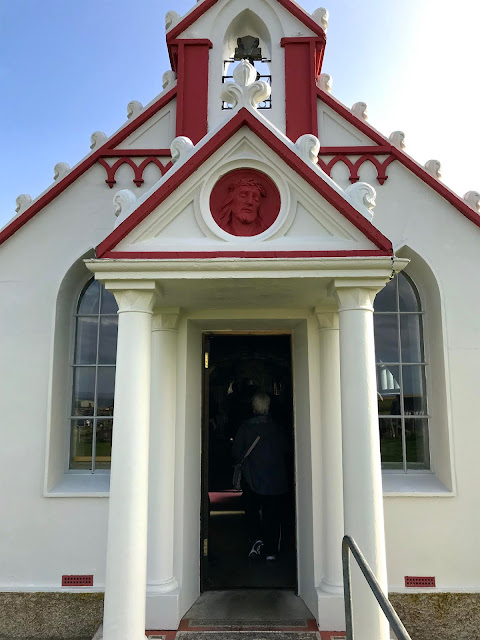 Picturesque and little yes, but with a big and old back story. 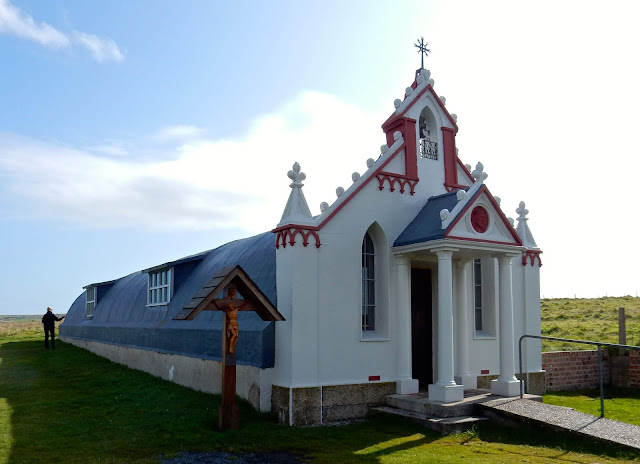 It begins in 1943 when 200 Italians, members of the 5th Labor battalion were captured at Tobruk and Benghazi and sent to Camp 60, a world away in Lamb Holm in the Orkney Islands.
The Italian POW's were assigned to build roads and causeways, known as Churchill Barriers. The structures were meant to block access through the Orkney Islands which housed the British Fleet, anchored at Scapa Flow.
The POW's balked at first until the camp commander Major TP Buckland and Padre Gioachino Giacobazzi put together a plan. The Padre, from the Order of Little Brothers, had been sent to the remote camp to minister to the POW's.
The men wanted a place to worship and so they were given two Nissen huts. Amongst the prisoners was an artist, Domenico Chiocchetti and the rest is an amazing history in the lovely Orkneys. 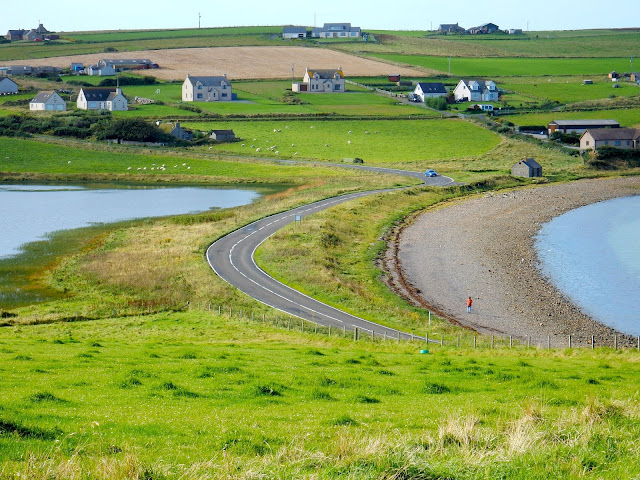 Using recycled corned beef tin cans and scrap wood they went to work. They used concrete to fashion the facade to hide the shape of the prefabricated metal huts they joined end to end. They covered the interior with plaster board. The altar and altar rail were made from left over concrete, used in building the barriers. 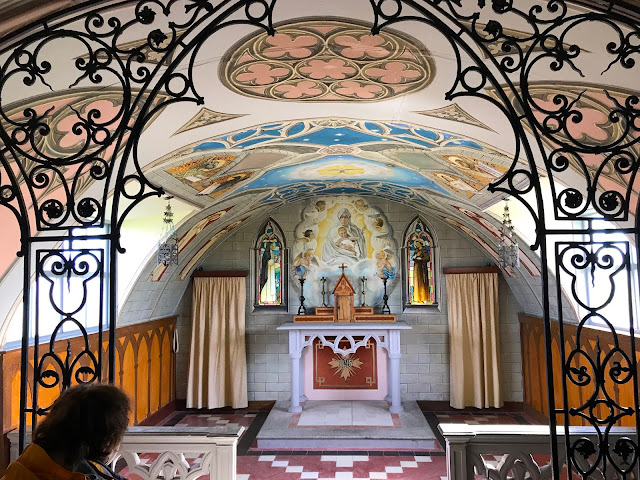 It looks real, but is paint and illusion.
Chiocchetti directed the work and the painting, done in a style to make flat walls look like carved stone, brick, wood, stained glass or tile. The ornate metal frame is painted tin cans, cut and shaped by the POW's. The candle sticks were also made that way. 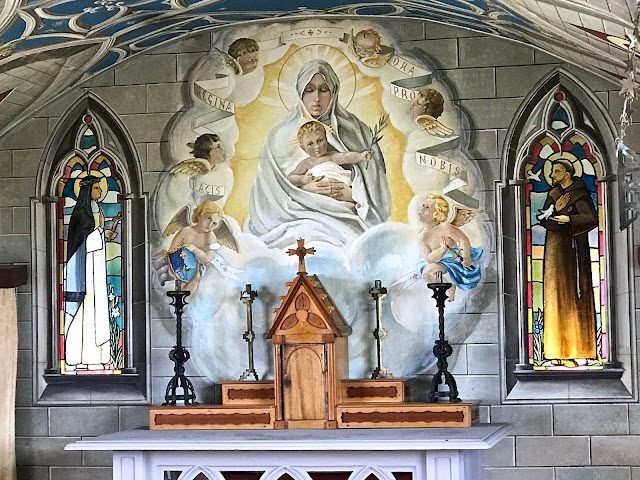 Chiocchetti's mother had given him a picture to carry during the war. It was a photo of Barabino's "Madonna of the Olives." He used it as the model from which to create the altar painting. 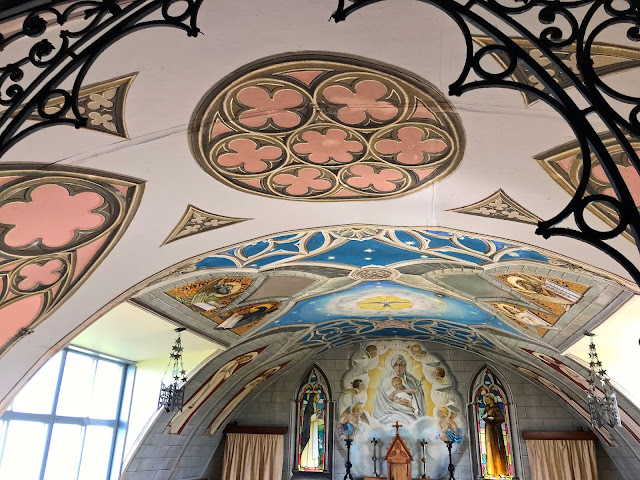 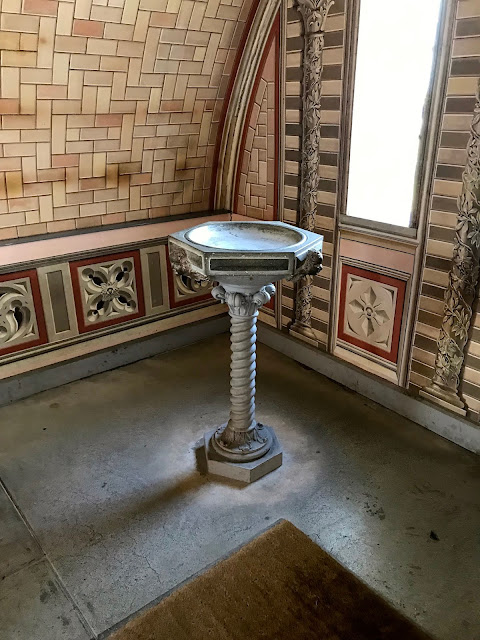 The baptismal font is a car exhaust covered with concrete.
The surrounding walls, like the ceiling, is paint on plasterboard.
Today the Italian Chapel is the only remaining building at Camp 60. Around the waters of the Orkney Islands one can spot a few rusted Churchill Barrier Block Ships that were purposely sunk to impede German Submarines. An irony in the peaceful waters and beauty of the Orkneys, they are now used for scuba diving. 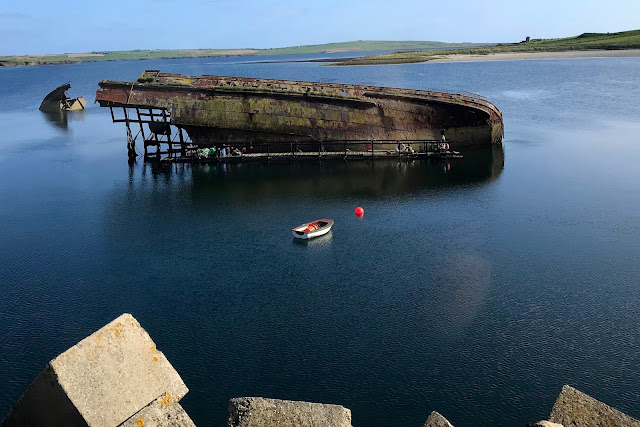 The chapel is used for special services and draws about 100 thousand visitors a year.
And there is a sidebar story. When the POW's were returned to Italy, Chiocchetti stayed to finish some detail work. Legend has it he fell for a local gal, but alas he had a wife at home in Italy. So with some flourish he assured the local woman though he needed to leave, he was leaving his heart at Camp 60. It is there in the recycled cement at the approach to the altar. 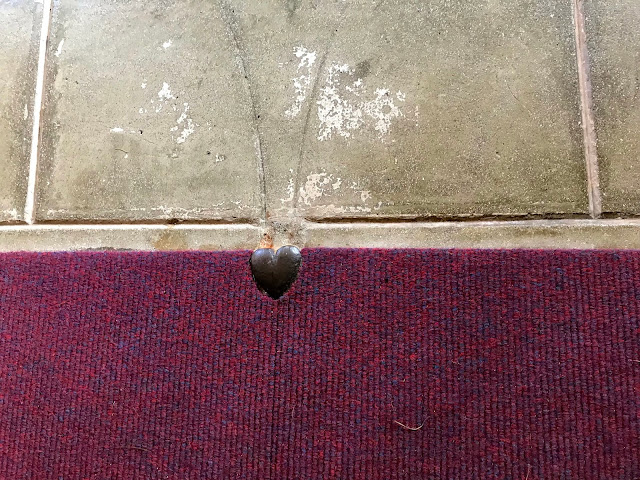 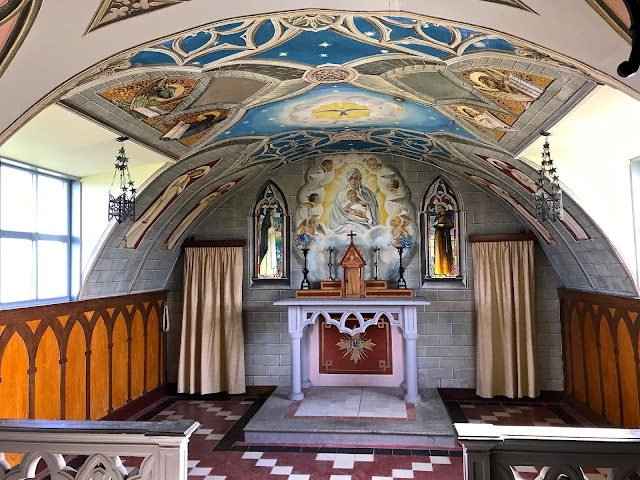 Chiocchetti returned in 1960 and 1964.  Many of the former prisoners returned in 1992. Chiocchetti died in 1999 but his daughter sang in a special commemorative mass in 2014 marking the 70th Anniversary of the Chapel.
An artifact of a world war remains and is an unlikely testament to peace, love, cooperation and imagination.

More from Scotland is ahead, and the itinerary is about to move us to the magic of Ireland.