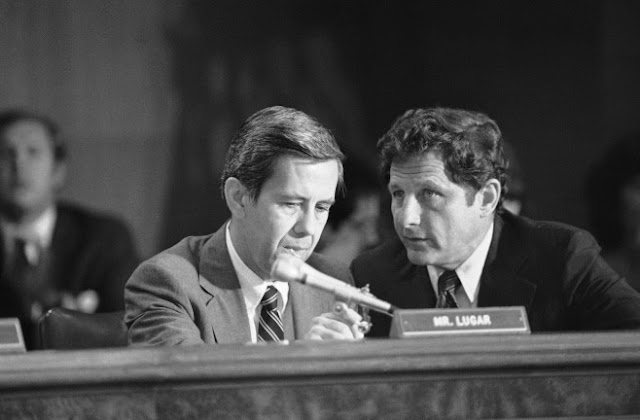 Richard Lugar was a great man. There is a reason he served one of the longest terms ever in the US Senate; he was a thoughtful, analytical intellect, he was a devoted public servant with a drive to make things better, he stood his ground, he chided and pushed even Presidents, and he worked as hard as anyone to make this world safe from nuclear weapons.
Lugar's passing at 87 is reason for you to spend a few minutes reading some of the cascade of coverage about this remarkable man from Indiana. 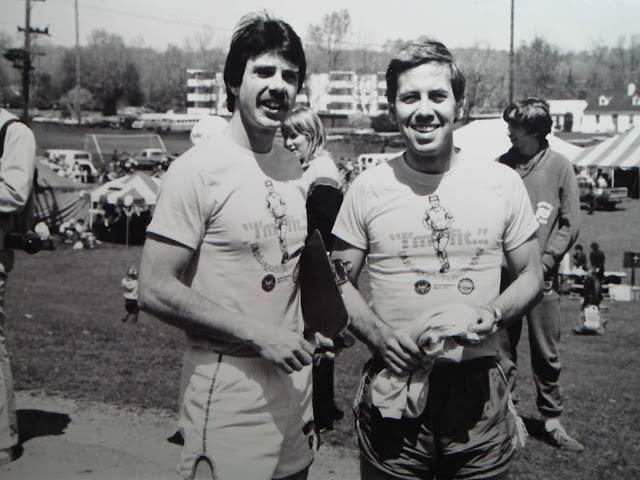 Tom and Senator Lugar at Richard Lugar Fitness Fest and Run
Lugar was an early advocate of fitness and was a runner.

I was fortunate to meet and begin covering his political and public service career in 1969. He was the young mayor of Indianapolis and I was a reporter assigned to cover city government.
At one of our first meetings, Mayor Lugar, who was organizing an international conference of cities, got down on his hands and knees and worked through an overflowing book case, looking for a manuscript by a scholar. He was an habitual reader, voracious consumer of information which he worked to integrate into his public service.

Lugar's work on Nuclear Disarmament and Agricultural reform were his long suits in the Senate where he was respected by both sides of the aisle.
Lugar was at the center of one of the most critical and dangerous tipping points in history.
The Soviet Union had collapsed and Generals from the Red Army showed up in Washington wanting to talk about life and death matters.
Secretary of State Baker and the HW Bush White House were being careful, but to a fault and spurned the contact.
Lugar took the meeting and along with Democrat Sam Nunn heard this message-The Soviet power structure is gone, so is the command of the Soviet Army and Navy and that means we no longer have control over nuclear war heads that have US addresses on them. The same is true for chemical and biological weapons.
Diverse locales, Georgia, Ukraine, Belarus, Kazakhstan, Estonia, Lithuania, Latvia and other nations that had been under the Soviet boot heel, had weapons, bases, ports and stock piles in their now independent nation. Who controlled them? That was the million dollar question.
Lugar and Nunn were quick. Lugar, a former naval intelligence officer and Chair of the Senate Foreign Relations Committee knew rogue players and terrorists soon would be bidding for control of the old Soviet nukes and chemical weapons and material.
With in hours he and Nunn had worked legislative handles and had millions of dollars to essentially save the world. Soon they were flying off to the old Soviet empire and "buying" war heads, and paying military officers to stay in place and guard the nukes and subs, paying to house Soviet troops who were ready to desert since the empire was no longer in place and could not or would not pay the troops. The troops had families at home and they needed money. Command control was breaking down.
What Lugar and Nunn saw would raise the hairs on the back of your neck. They returned to the states and crafted what was known as the Nunn-Lugar act. The US would buy weapons and take them down. It eventually became known as the Cooperative Threat Reduction plan. The two of them built a legislative consensus and kept the program funded. After Nunn retired, the work was Lugar's to do.
This period of Lugar's work was one of the great diplomatic plays of all time. It is in the echelon of the Marshall Plan.
As a documentary maker I developed a project to tell the story. It didn't get made. As we were fundraising 9/11 happened. The focus shifted. 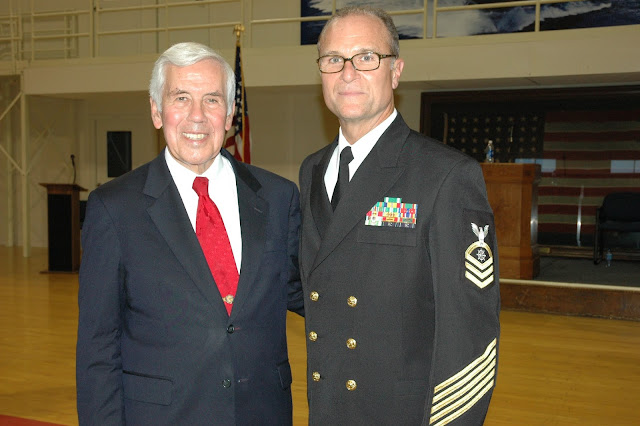 Senator Lugar and Lewis Stiner at the ceremony of Stiner's retirement

Lugar was a progressive and creative mayor who was the godfather of revitalization of rustbelt cities. The halo around Indianapolis as one of America's great cities, was drafted and   the work began under Lugar, with the assistance of his dynamic staff, especially the visionary Jim Morris. The new Indianapolis that followed became guide light for other cities reinvention.
Morris was one of the brilliant young thinkers Lugar brought to public service and there were many.
I met a young Mitch Daniels as he worked in that era and with Lugar's first political chief, Keith Bulen. Daniels became his Senate chief of staff for several years and later worked in the Reagan and W Bush administrations as well as being twice elected Indiana Governor. He is now President of Purdue University.
The coverage of his passing reprises the extraordinary record of his 36 years in the Senate. Consider the sweep of history from 1977 to 2013 and ponder that Lugar was often a pivotal player and was revered and respected by politicians from every point on the spectrum.
Praise came from former Presidents, current candidates, Democrats, Republicans and foreign leaders. They respected his depth and they liked the man.
When my fraternity brother and long time friend retired from Naval Intelligence, Lugar was there. He respected Lew's service. Lugar had been a legendary intelligence briefer for Admiral Raleigh Burke. He said that had been a shaping experience.

A lot of people think Lugar would have been a good President. He gave it a run in 1996. One of his chief operators was Mark Lubbers, another of the brilliant people attracted to service by Lugar.
His campaign was themed on fiscal sanity and nuclear security. He was a brainy and non flashy candidate but what was the death knell for his campaign was the day it launched, April 19, 1995, the day of the bombing of the Federal building in Oklahoma City. Millions of prospective voters didn't get to see or hear what would have been his moment in the spotlight.
Amongst those who knew, worked with or covered Lugar there was always discussion about what might have been, how might the world have been different.
Lubbers has advised Governors and lawmakers and has leveraged his own creative approach to policy issues, mentored by the Senator. Lubber's wife Teresa has spent her life as a multi term State Senator and Commissioner of Education. Her path to public service was inspired by Lugar who she interviewed as a high school journalist. He had a twinkle and spark and a way of motivating.
There is a cadre of politicians and public servants who were inspired by the former school board officer, innovative mayor and towering 6 term US Senator.
I've been ruminating on lots of Lugar reflections.
One that makes me laugh is when my first historical mystery-thriller novel was published. I was on Sanibel Island vacationing and doing a series of book signings. Lugar's staff reached me to say the Senator was also on the Island, one of his favorite break spots and that I should take a book around to him.
When I arrived I was directed to a location near the pool and beach under an umbrella. There was the senator in a polo style shirt, Bermuda shorts, with dark, to the knee socks and I think wing tip shoes. They may have been loafers.
I've written before about some of the greatest evenings.
When I was president of the Indianapolis Press Club we hosted dinner and conversations with Senator Lugar and Representative Lee Hamilton. Those men were among the most knowledgeable on national security, intelligence and foreign relations. They held ranking positions in the Senate and House. Sitting there and listening to their state of the art information and analysis, and seeing the respect they had for each and the marvelous byplay was a good as it gets.

And so was Lugar. I didn't agree with all of his votes, but I respected him and the intelligence he put into his public service. He may have read more than anyone I know. He certainly did more to keep the world safe than probably anyone else.
If you don't know much about this man, read a few articles. He deserves the attention due a genuine and historic "Statesman." There are precious few.

See you down the trail.
Posted by Tom Cochrun at 6:18 PM