A Good Night in America 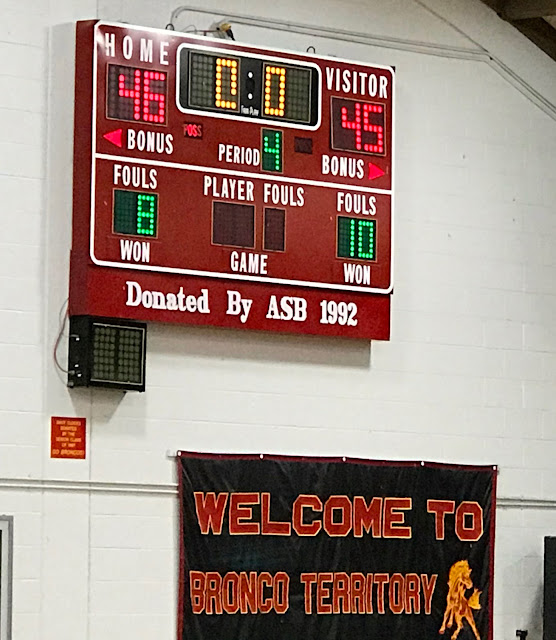 The hometown kids prevail and Jon Batiste wails. Good nights in the US. 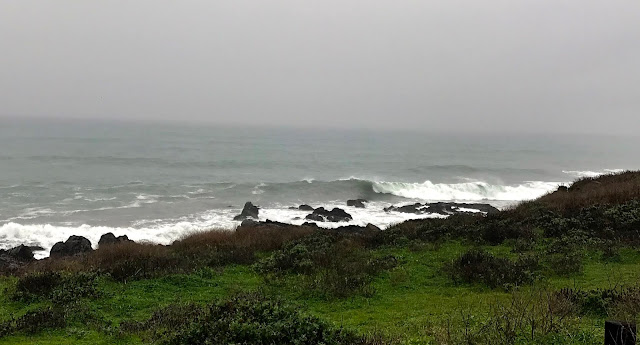 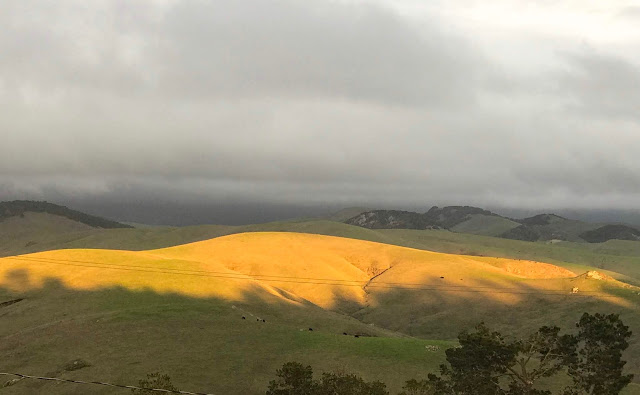 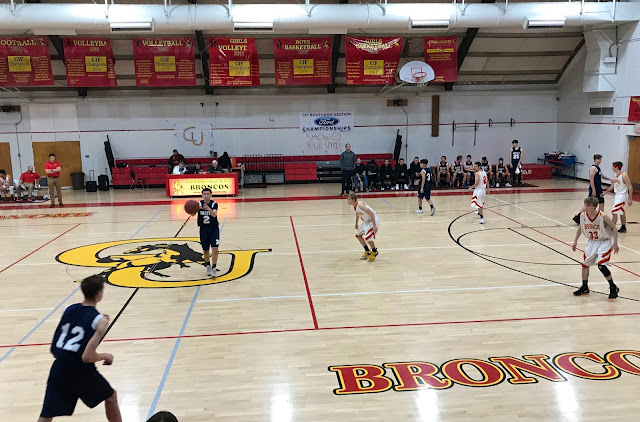 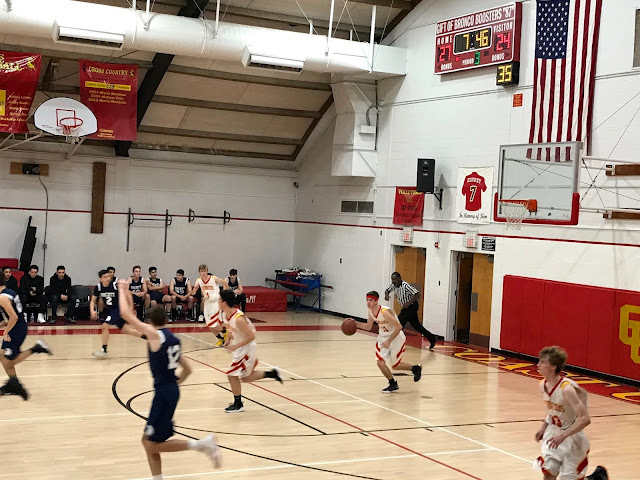 It is the rhythm and soul of our collective dream, the sweat and the lessons of life. It is sweetness, pure and simple from large urban field houses to small village gyms. 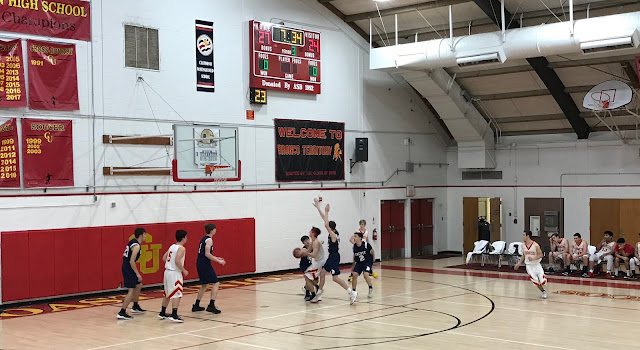 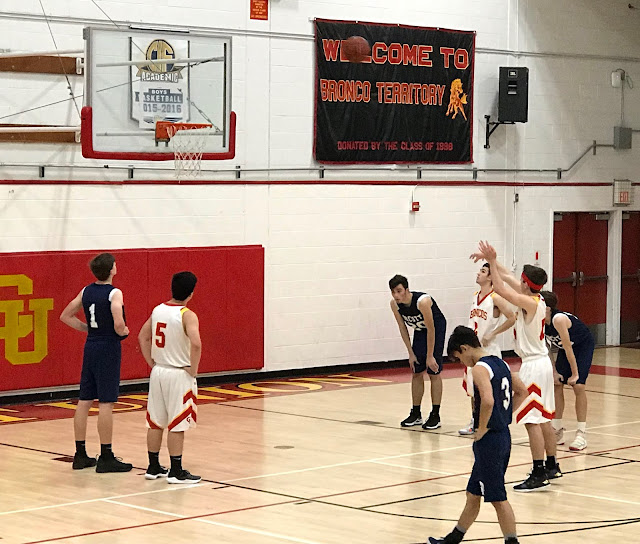 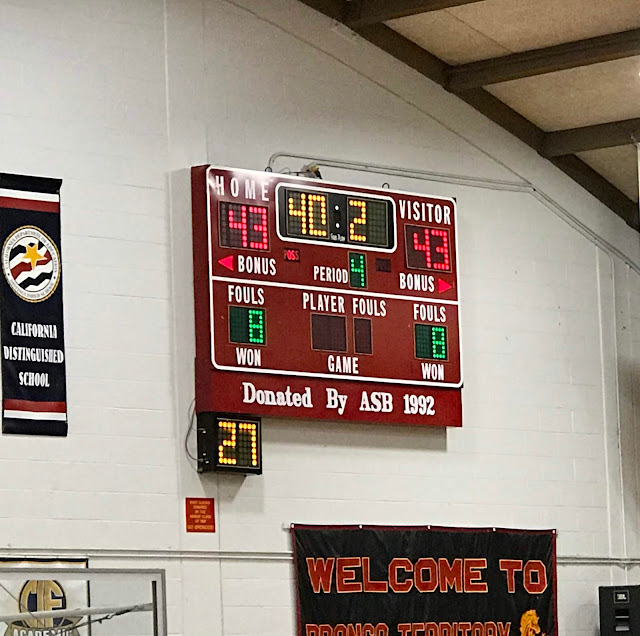 I'm watching a classic basketball scenario run before my eyes here on the California Central coach.  It seems only a couple of years ago Coach Gehrig Kniffen was the floor captain of his scrappy Broncos team. He played with heart and a court sense. Now he's teaching the love of the game to his team. 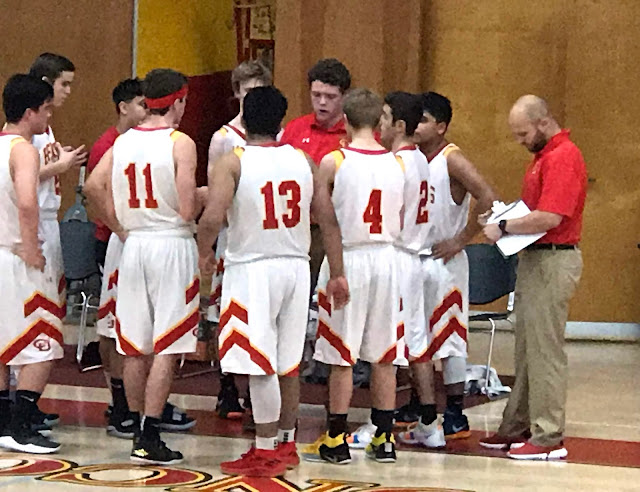 They're not big. One of the kid's mom tells me only 3 or 4 of the boys were basketball players. The rest of the kids grew up on soccer.
Coach Kniffen has done well. The team plays smart, they spread the floor, they move the ball, work for a shot and show a tenacity and drive. 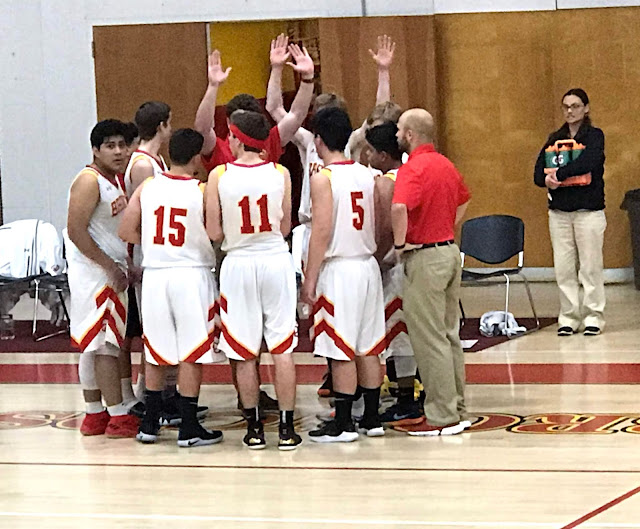 In this gym on this night the game was see saw, tight with heart and soul pushing up and down the court. Parents and friends were enthralled and entertained. On this night the hometown Broncos gained a well deserved victory. And on this night in America winners and losers met as good sports.
Orcutt would have a ride home, considering those few plays, those missed opportunities that could have made the difference. The Coast Union Broncos would give the new coach another first season win. It is the way of the game, an American way. 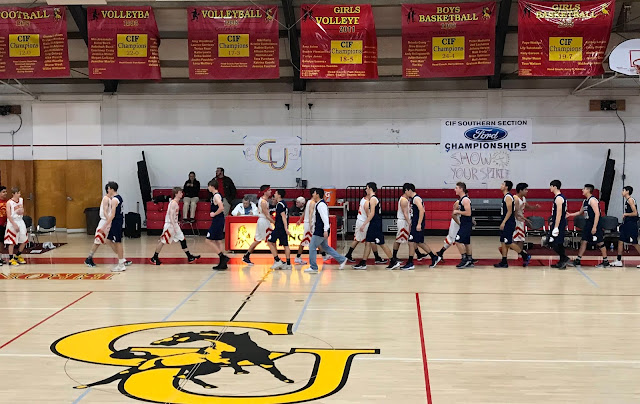 It is a game that is immensely personal to a boomer from Indiana. My life is measured in chapters of basketball.
I got the love of the game from my dad who was a skilled and accomplished player who, were it not for WWII, probably  would have continued on in semi pro and eventually professional hoops.
I'd practice ball handing and dribbling in the basement of our little Muncie house and clip newspaper articles of my beloved 1950's era Muncie Central Bearcats.
In Indiana a kid plays basketball wherever and much as he can. I remember Jon Hilkene's old barn with a hard packed uneven dirt floor on half the court and uneven old planks around the hoop and free throw line. We used to shovel snow or chip ice from Tom Johnson's extra wide driveway that was bathed in a street light and well pointed night spots on the house. In the winter we had to wear gloves, which affected our shooting and in the summer, sweat soaked we'd swat at mosquitoes and gnats. Summer basketball camps where the smell of the gym was especially sweet from the wax. Playing between the Hackbee's and Lowen's on an uneven, sloping alley with hoops hanging on the backs of garages, stopping when trash trucks or cars drove by.
An Indiana kid dreams of wearing the school colors, but life and moves and broken bones and size can conspire against that "glory." But in Indiana a kid can play in community centers in the inner city with dazzling players and shake and bake moves, or in a legendary old hotel in industrial or AAU leagues with true one time stars, or in church leagues campaigning around the city in great old gyms, at the Y, in pick up games on hallowed field house floors.
Even in middle age and beyond an Indiana kid can play in the elbows for lunch bunch at the Y, or in "celebrity games" barnstorming around the state in hallowed old field houses and gyms, playing local all stars or faculty teams to raise money for schools, bands, charities and the like.
Game night in America is a good night. It is stepping into a slip stream of good nights that reach back to the beginning and flow forward with that sweet, sweet sound and smell and swish of a net. 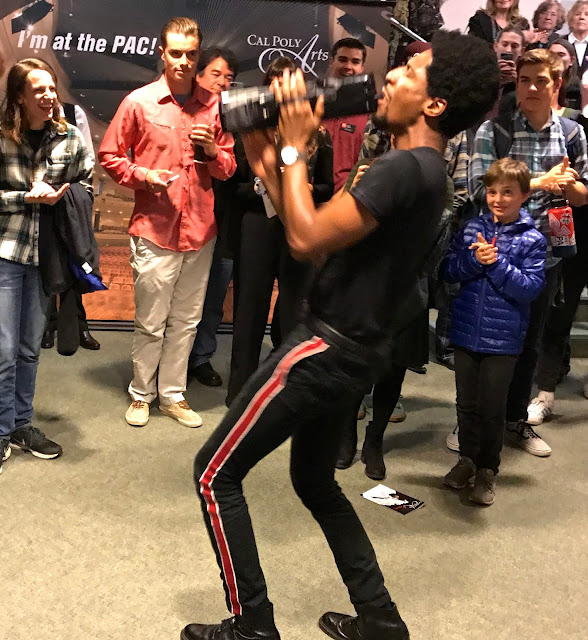 New Orleans virtuoso Jon Batiste, leader of the Stay Human band that is Steven Colbert's house band on CBS is a hoopster. He is also a dynamic and charismatic performer.
After his recent piano concert in San Luis Obispo he lead
a "love march" out of the auditorium. Was he great? Look at the smile on that little guys face. If you ever get a chance to see him, don't miss it.  It is pure joy, love and energy.
He said his concert is like sitting in his living room while he just plays around. That's a great thought.  So is spending some time in a gym with him, playing the great American game.

See you down the trail.
Posted by Tom Cochrun at 11:51 AM