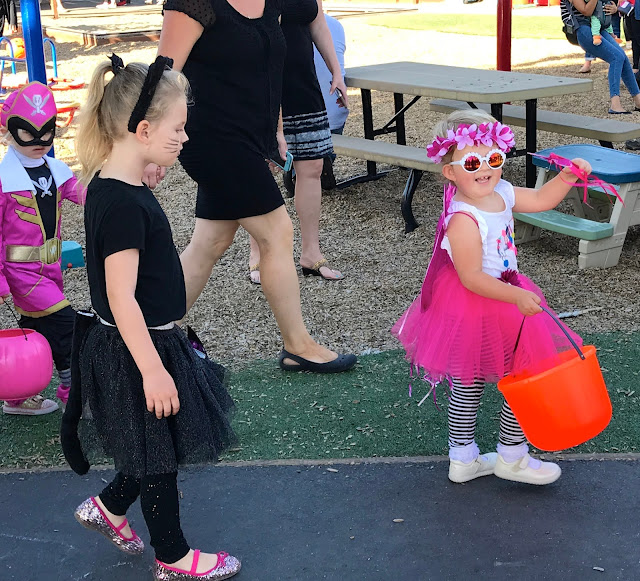 Something cute and precious is coming up. 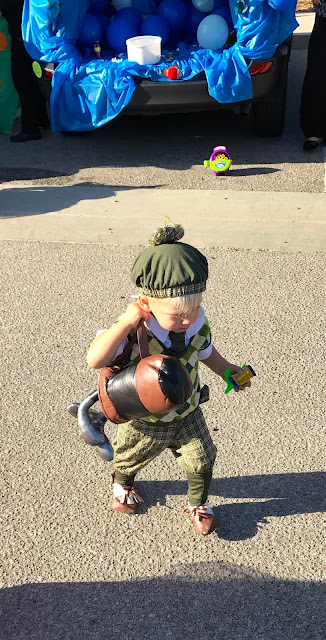 But first a note about this world we boogeymen are creating for the innocents.

words matter
In 2017 there was a 90% percent increase in the number of anti-Semitic incidents in US schools, K-12.
There was a 60% rise in anti-Semitic incidents in the adult world.
The FBI says in 2016 there were 6,121 criminal incidents motivated by bias against race, religion, sexual orientation, disability or gender. That was a huge rise since the Obama and Bush years.
This year, after two years of Trump there has been another dramatic increase in hate crimes, anti Semitic violence and mass shootings.
We'll return to these matters after a softer target-Megyn Kelly.
the megyn kelly paradox
Megyn Kelly is an intelligent, educated, experienced person. I presume when she made her comment about the appropriateness of wearing black face at Halloween she was operating on the assumption that she was speaking in concert with high principle. In fact she may have thought she was intoning the principle of Dr. Martin Luther King Jr. that color of skin is not as important as character. Again I assume she thought white people wearing black face, or black people wearing white face was fine, acceptable and a sign of how "evolved" we have become. I don't think she thought she was being racially insensitive, however.....
The fact that a multi million dollar television personality was so dead wrong is a snap shot of how racially insensitive and perhaps even ignorant this culture is. That her pretty little head could not, or would not grasp the grave insensitivity and callousness of her remarks is a loud and ugly confirmation of the racism that exists in this culture.
We fail miserably at beginning to understand the meaning and significance of something like black face to people of color. Though someone might not think a comment or action is hurtful or disrespectful, it underscores how little we think about people who are not like us or who derive from a different life experience.  We fail to learn to appreciate or be sensitive to the cultural and life history of other races, ethnicity, gender and orientation.
Frankly I was stunned that a woman at the center of a 23 million dollar contract, on a major network could be so mindless as to not know more about the cultural dynamite of black face. And that is only one famous example of how little we know, or care.
I don't think Megyn Kelly is a vicious racist, but her inability to perceive the hurtfulness of what she said to fellow citizens, or the desire to even contemplate the impact of her words was wrong and pretty much explains why and how we are in such a divisive time.
where does the buck stop
Right or wrong, US citizens look to the Presidency to set a tone, to be a moral arbiter, to be a kind of surrogate parent figure.
"The phenomena we're seeing post-2016 hasn't been seen in modern political history, which is once the election was over, people - ordinary people - Americans who voted for Trump continued to demonize and hate Hillary voters and vice versa. And that's still going on today two years later. "
The comment is from Carolyn Lukensmeyer, executive director of the National Institute for Civil Discourse in a conversation with Lulu Garcia Navarro. She calls the rhetoric of the Trump years a very different phenomena, a "virus."
Ariela Schachter a sociologist at Washington University says people become more measurably negative after being exposed to Trump's negative messages about immigrants. And it gets worse after it is magnified by media.
Trump's tweets and his performance at his frequent rallies enforce negativity, incite the extreme right and racists.
Schachter says Trump's tone, style and message is pernicious.
"I do think, though, that we have to consider the power dynamics. So the president of the United States has a uniquely powerful position to amplify the messages that he's sending out in ways that the rest of us don't. I also think we need to think about the impact of this rhetoric on immigrant communities in the United States"
Lukensmeyer says probably 10-12 percent on the far right and 8-10 percent on the far left have "no interest" in ending the hostility or "closing the divide." But she says that leaves a full 75-80% of the rest of us who what to cool it down.
Trump's tone has been nothing but divisive. His father was an accused racist doing illegal real estate practices. The Trump presidential campaign began with a racist attack on Obama (the birth certificate) and Mexican emigres, followed by the Muslim travel ban and continues to this day as he amps up fear and hatred. His most recent lies about the "caravan" being a case in point.
His base and supporters refuse to address these issues of blatant deceit and divisiveness. Fox betrayed their real motivation when they tried to plant the idea the pipe bomber was a "false flag," ruse by liberals and democrats. That is typical of the way the right and the regressives distort and divert. It is a danger sign for the republic when so many ignore the authoritarian and anti American behavior of the thug president.

for the record
US intelligence agencies report Chinese and Russian spies listen to Trump calls on his iPhones. Trump lied when he said he uses only government phones. He speaks with friends and tweets and even discusses sensitive information on non secure phones. Remember how much heat a particular candidate received for using a non government server for e-mails?
Remember when Republicans pretended to be fiscal hawks and screamed about the deficit? For the record, the deficit is up 17% under this President. Where's the indignation now? The zombie apocalypse may well be the Republican party under Trump.
a pivot
from the obscene to the joyful 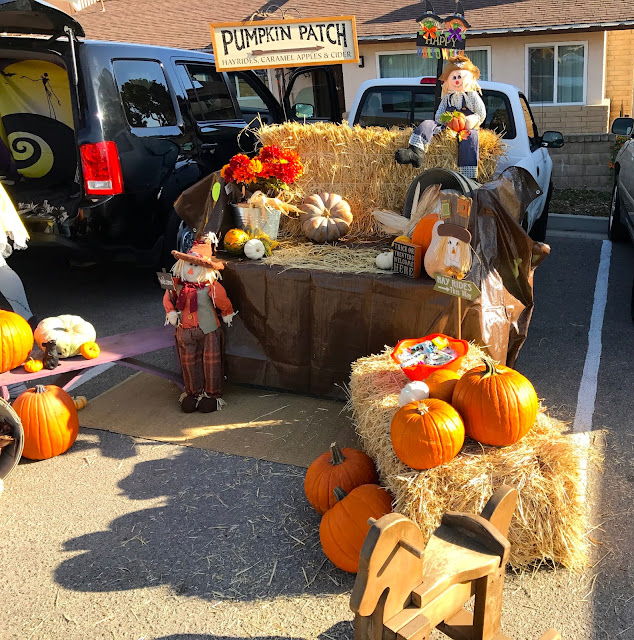 The Morro Bay United Methodist Children's Center sponsors a safe alternative to Trick or Treat outings for the little ones. 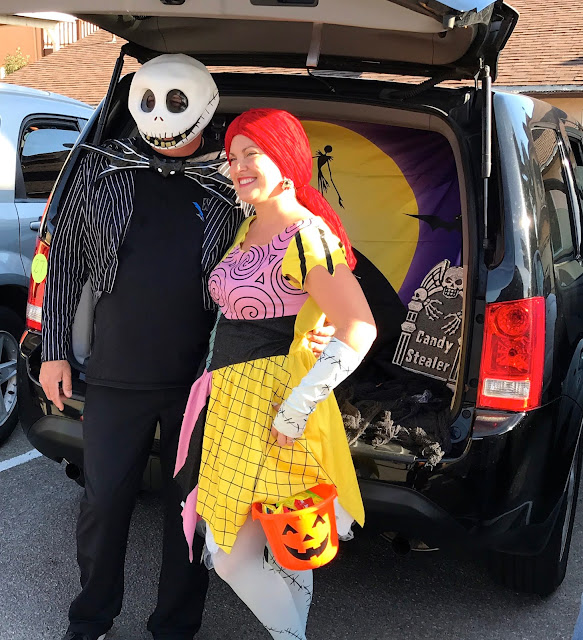 It's called a Trunk or Treat Spooktacular. Parents decorate trunks and hand out sweets as the kids in costume collect goodies in the parking lot. 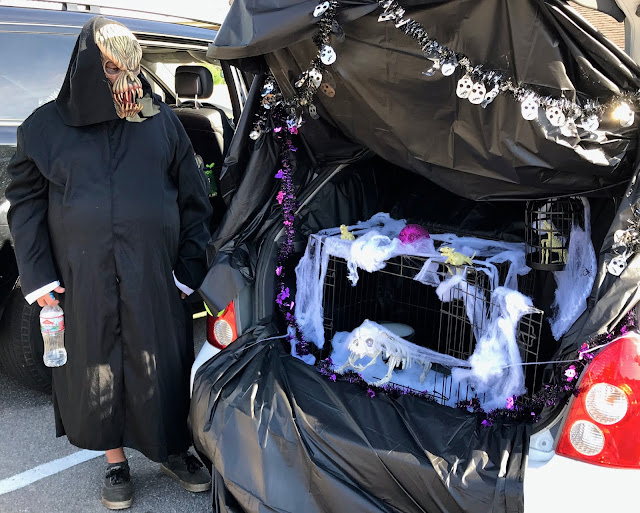 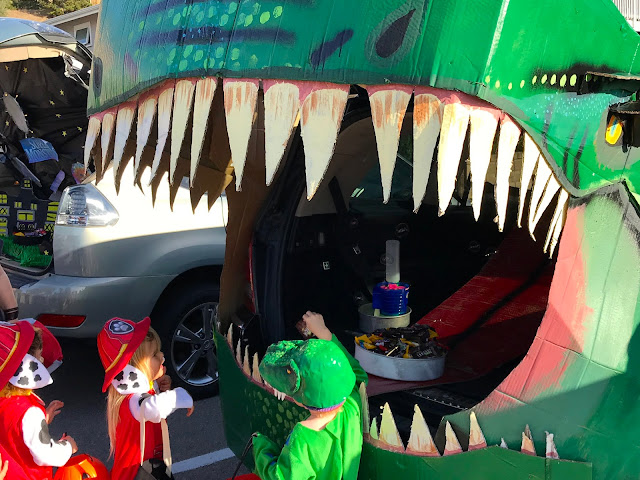 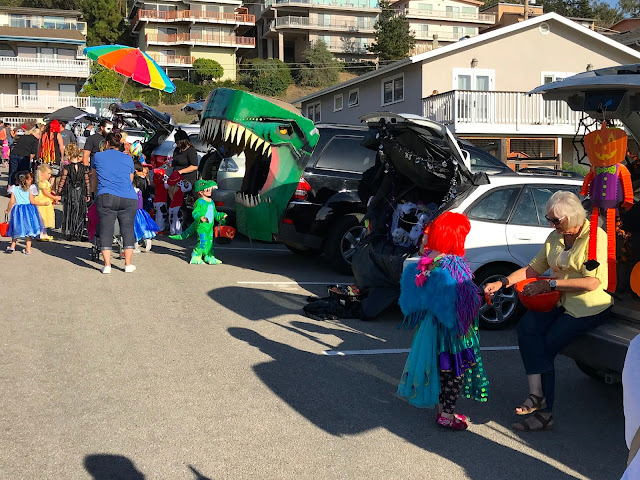 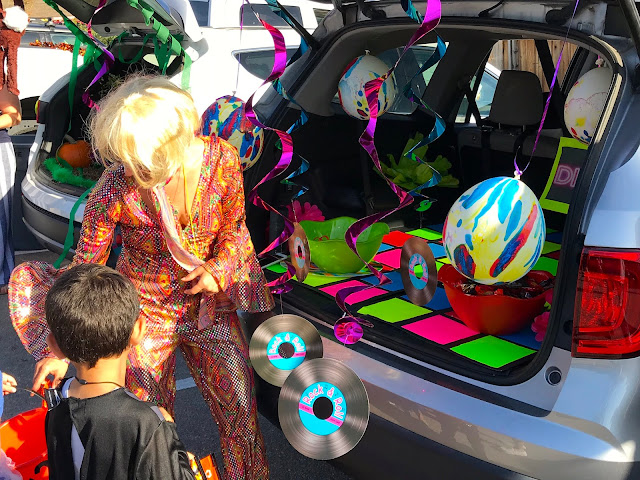 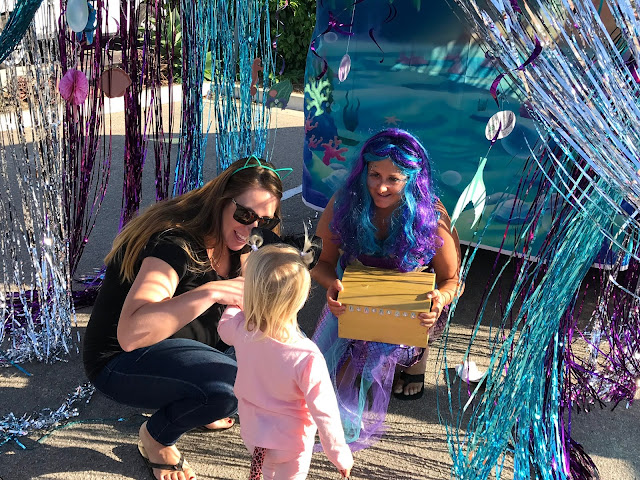 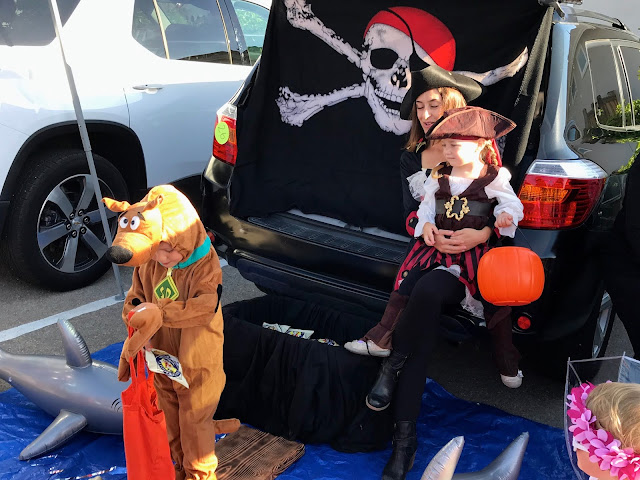 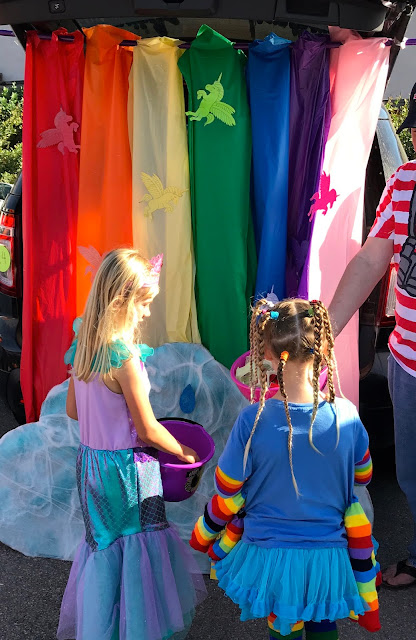 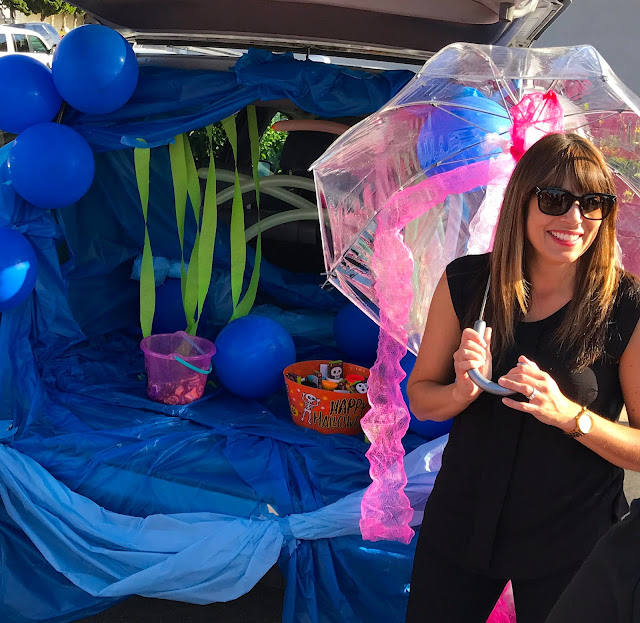 The guys in the two following frames added live "creatures" for the kids to see and touch, if they wanted to. 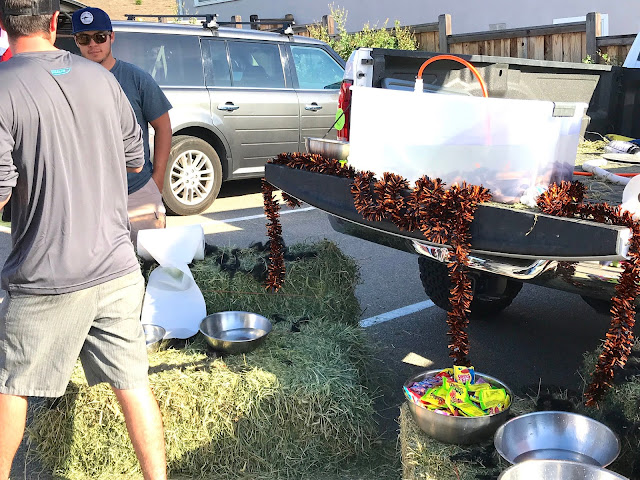 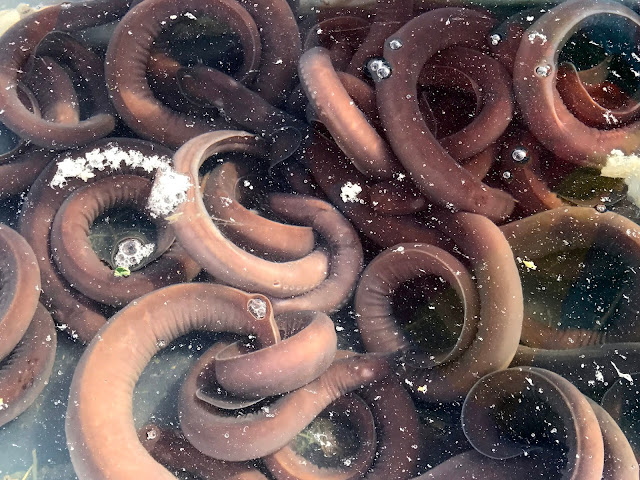 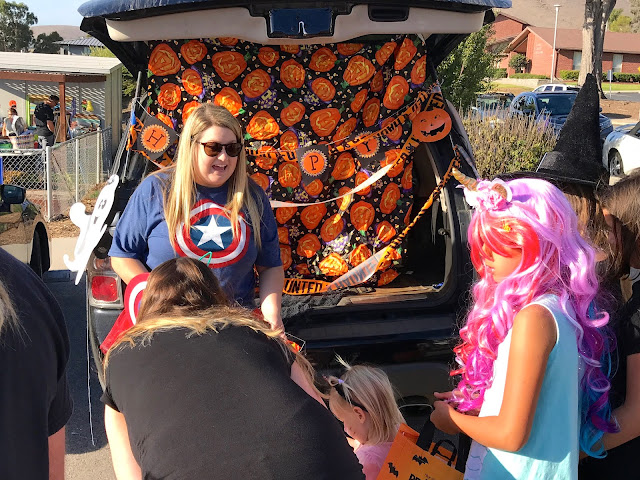 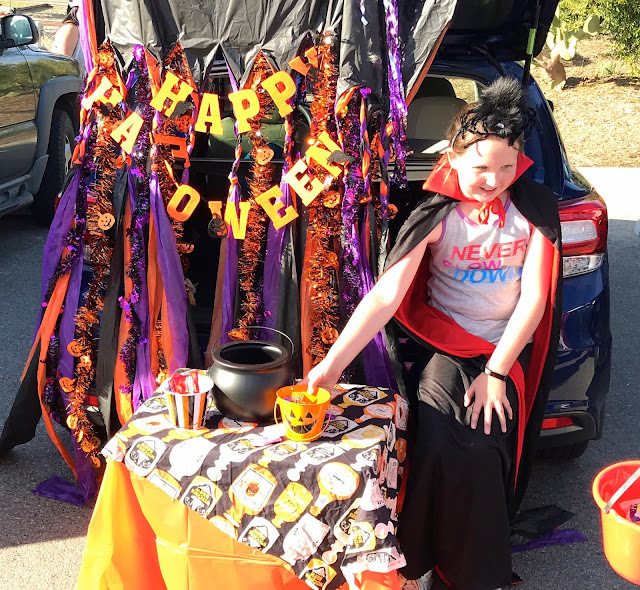 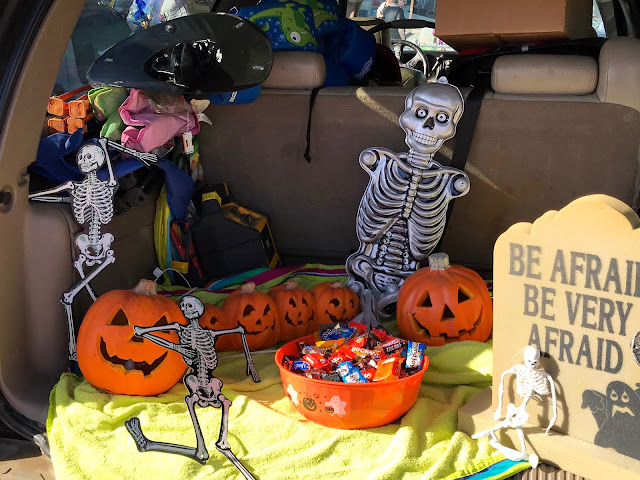 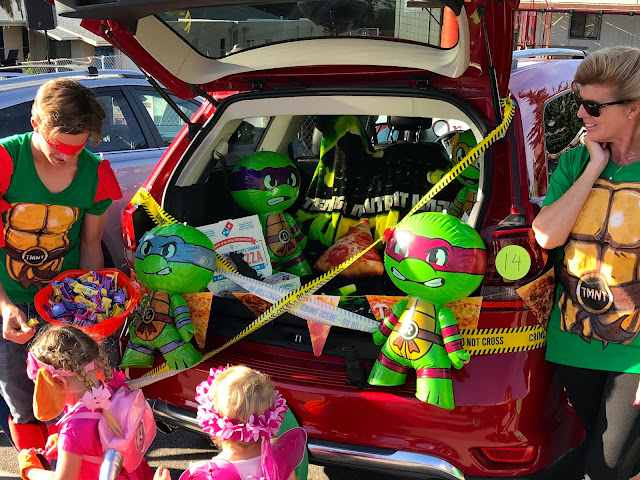 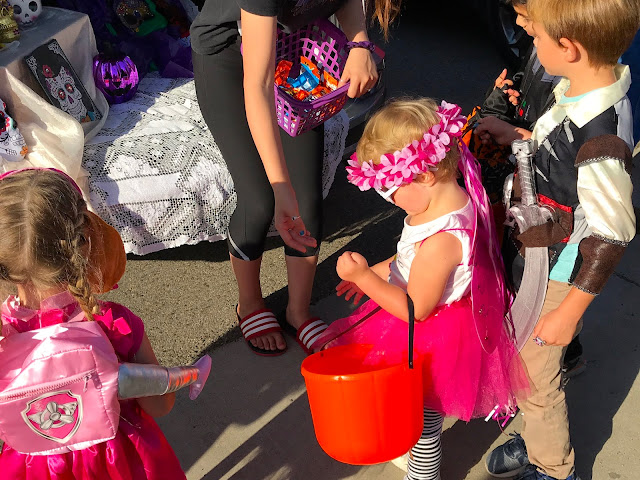 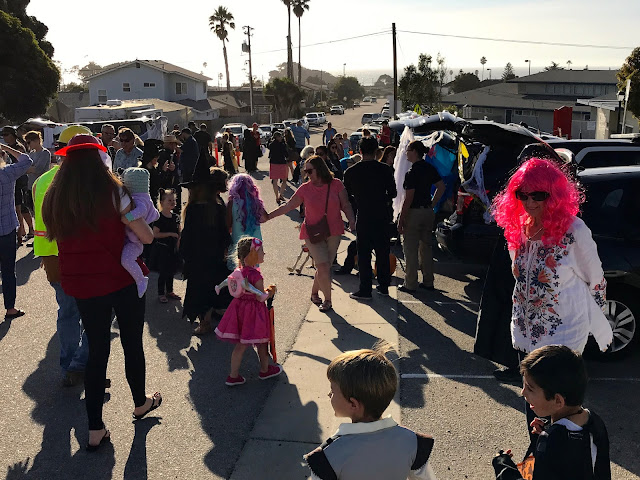 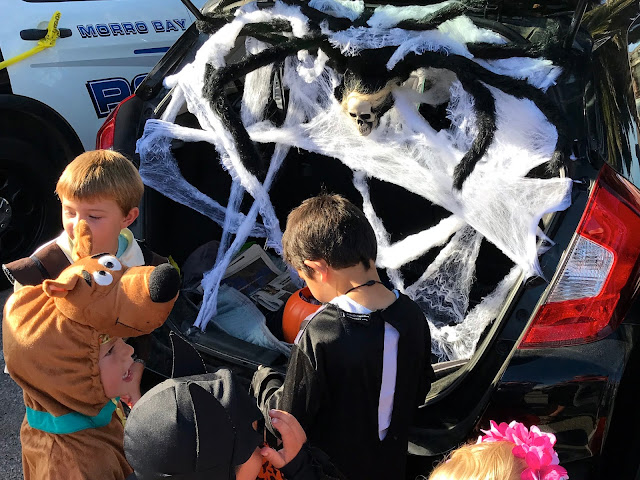 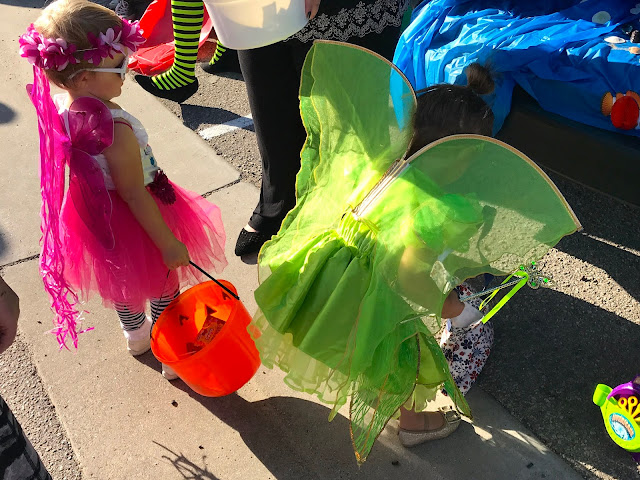 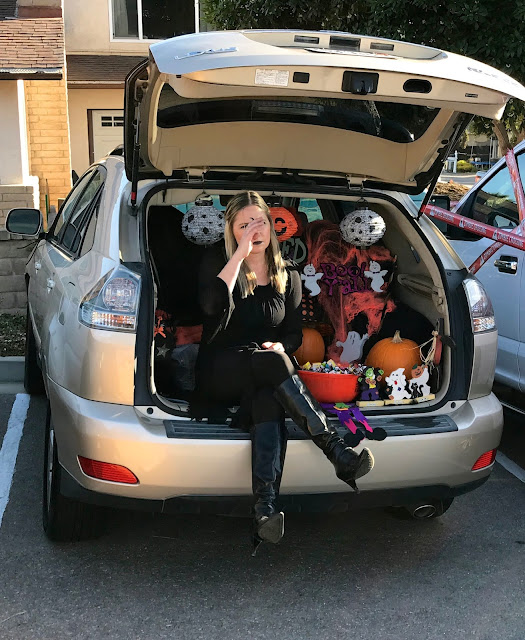 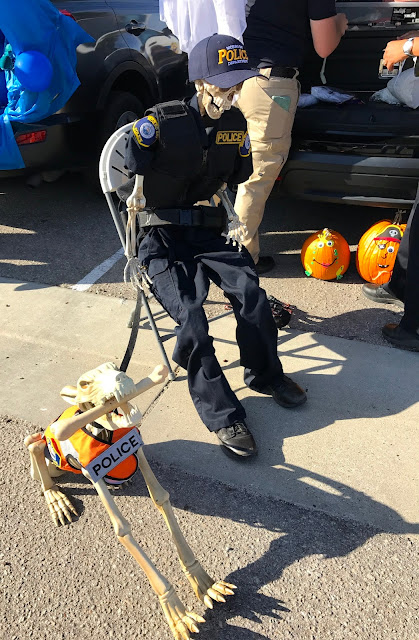 Before the trunk treating there is a costume parade around the Children's Center playground. 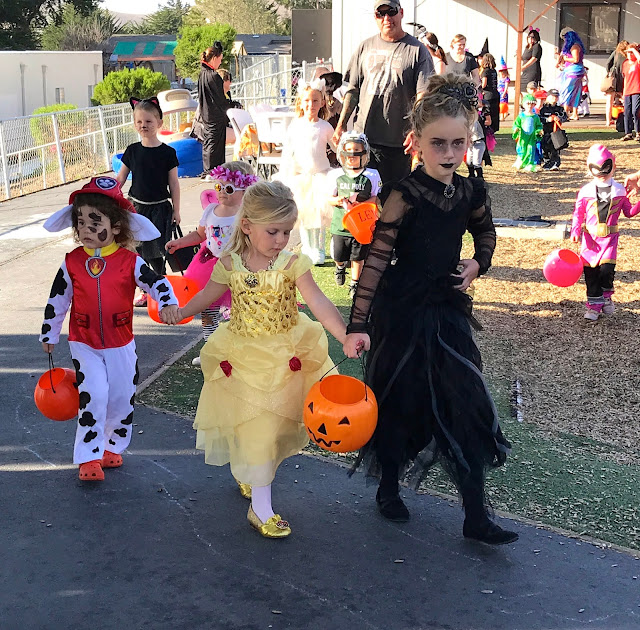 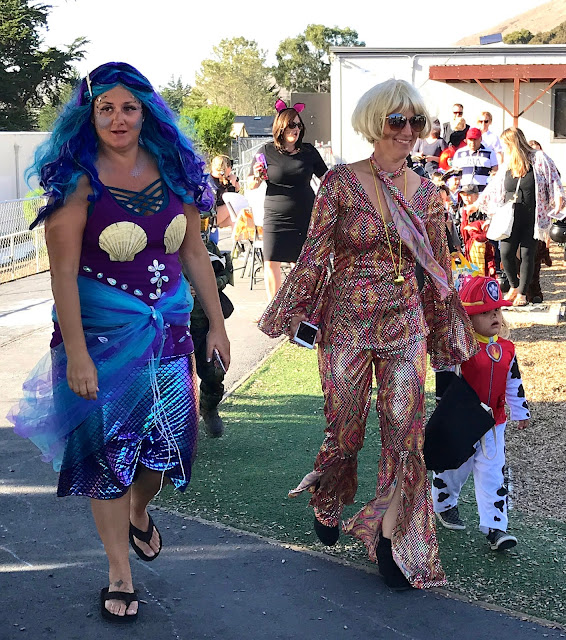 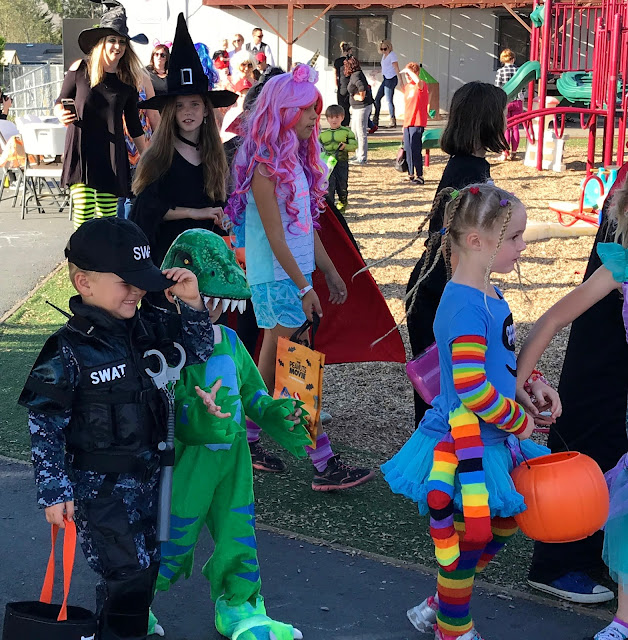 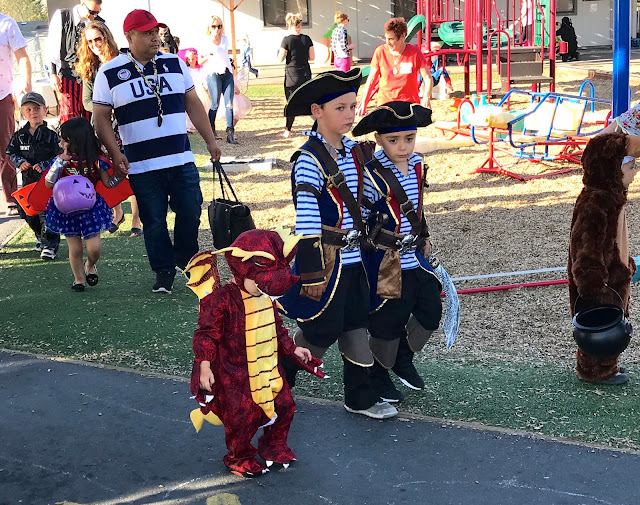 Good times and candy.  Adult life should be so sweet.

See you down the trail.
Posted by Tom Cochrun at 11:29 AM