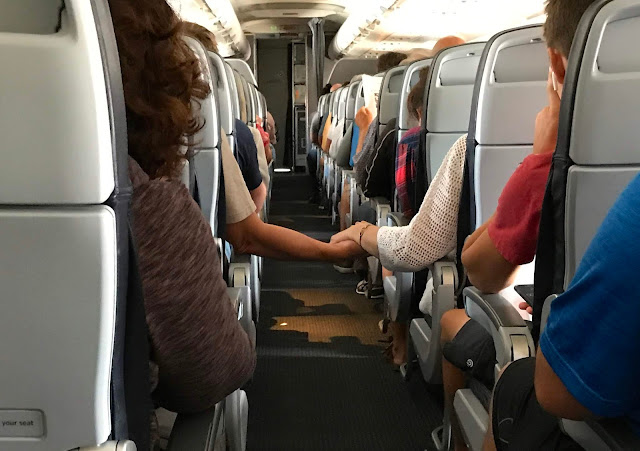 Take off on a cross country flight

There was a time when I lived a lot of my life at 30 thousand feet. Now it seems an intrusion into what I'm trying to claim as sanity. But I thought the scene above was sweet.
Not so sweet is the endless litany of phone conversations the rest of us are forced to hear. If I were a corporate spy there were several breaches available, because the guy or the gal with-in ear shot was saying stuff that should not have been overheard, proprietary and even financial information that should be secured.
To my ears, even worse are the personal conversations. America is sounding like bad reality television.
I told Lana, I'm glad my road warrior days are over. I don't have it in me anymore.
I felt bad for the guy, only a few years my junior, who had strung his charger under the bar while he jockeyed calls, shifting appointments, and booking new flights as plans derailed because of flight delays and missed connections. Life in a house of cards!
I had been up at 3:30 and now half way across the country it was 7:00A and I was squeezed in between him and the breakfast burrito eating, email writing, bearded young man on the next stool. I told the waitress I wanted scrambled eggs and hot water for my tea.
"Are you drinking your breakfast?" she said to the flight shifter to my right, sipping his beer.
"You got it," he sighed, fingers back on the phone with background photos of who I presumed were his grown son and daughter.
A sorry scene. No way to live.
A note to those of you who are out there every day, lower the volume of the calls, please. 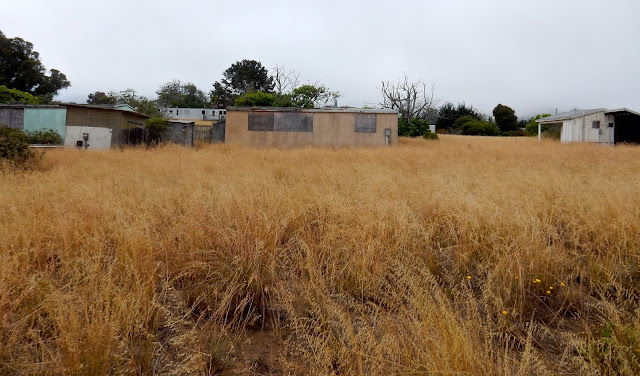 Out in Los Osos is an island of the past. The last acres of an old ranch surrounded by neighborhoods that seem to pay no heed to the life and industry that once happened there. It too will probably go the way of development. 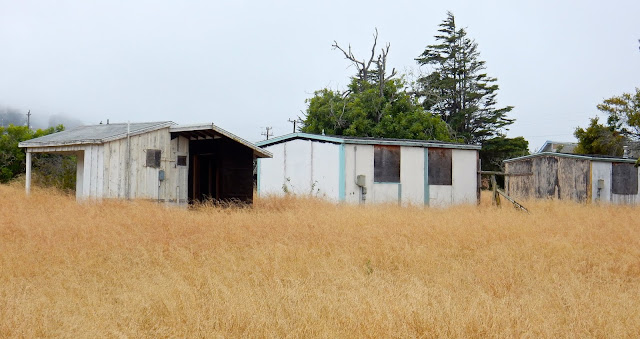 I couldn't help but wonder about the lives that were lived here, the work that was done, the incidents that were once vital. 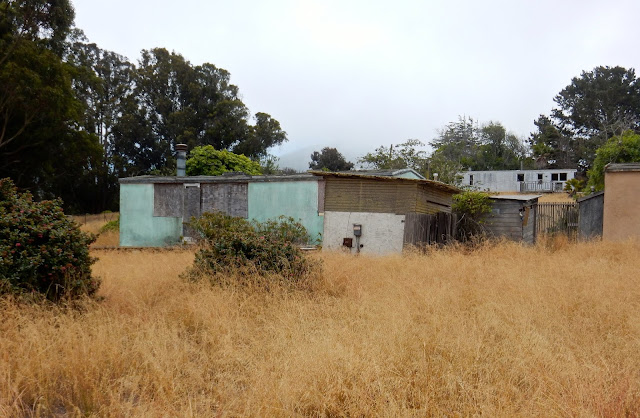 This is what is left of a history that, like the buildings, is dilapidated, and falling apart. I wonder about those stories we'll never hear. 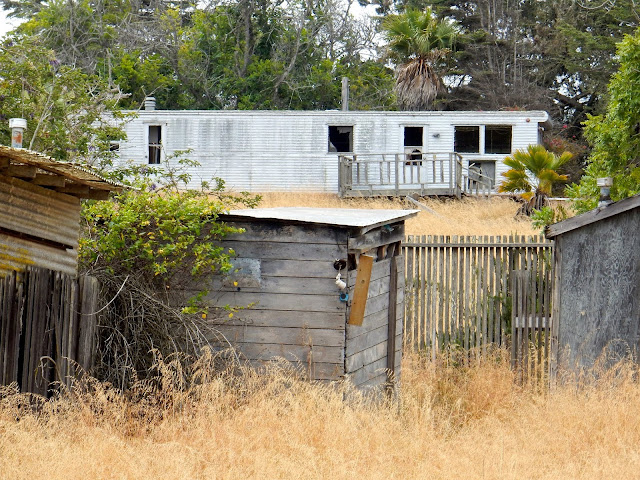 the disconnects
Could be wrong about this, but I'm getting the sense a lot of people are not paying attention to our national tragedy or they are so stuck in their silo of bias and belief they refuse to see the truth. That and those who are sickened by the reality are suffering a fatigue.
And there are other disconnects. A friend who does international business opened the door on a situation that has not percolated to the top of the news services. Since the administration has begun trade warring, this friend's business world has gotten aggressively prickly.
Mexican officials refuse to release product until he fills out a flurry of new forms, in Spanish. Asian clients are asking for a new invoicing system that spreads out cost to keep under a new maximum cap, so they can avoid being charged a fee. Wire transfer payments are suddenly more expensive, nations are asking for additional paperwork and execution fees and on and on.
He's been in this line of business for more than 20 years and this is all new stuff.  Hassles, harassment, retribution. My friend said the US State Department and the USDA Foreign Agricultural service have spent years of negotiations and making agreements that clear the way and empower the export of US products. And all of that is coming undone, because of the occupant of the White House, who has not a clue about how intricate and complex the world is.
decoding
"There are none so blind as those who will not see"
in other words
"Understanding cannot be forced on those who choose to be ignorant"

There is a lot of that, a dangerous amount, going around these days.