...When Rights are Essential...When Wrong is evil... 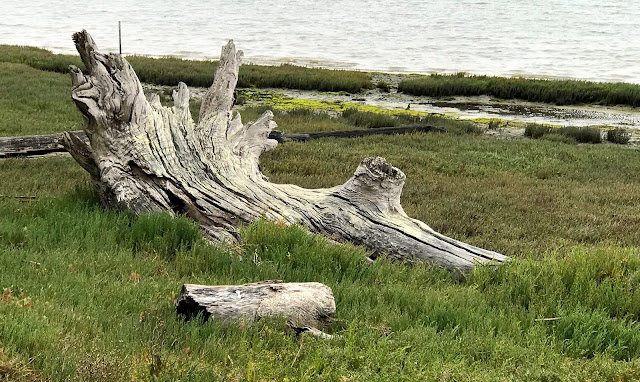 A breather and a contemplation. Tucked into our complex lives is the need for moments to just look, appreciate and breath deeply. Some of you regular readers are facing health issues and please know our thoughts are with you.
Our thoughts are also with others and we get into that below. 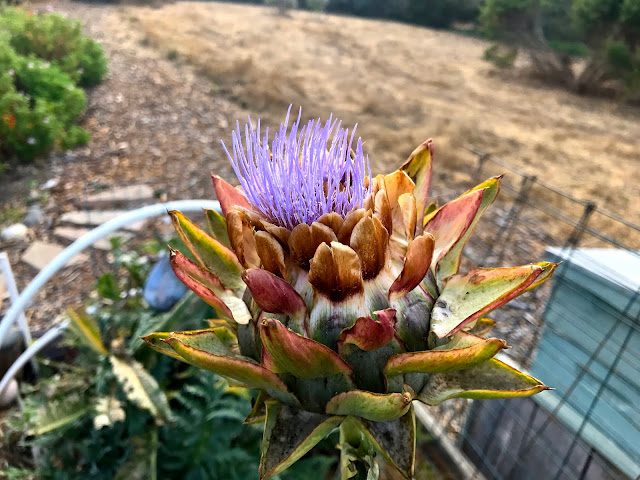 But first, have you seen the hair cut sported by an artichoke that goes to seed?  We've enjoyed several "farmed" in Lana's raised growing bed. She decided to let the last one go to seed, to see what it looks like. Kinda of punk eh? 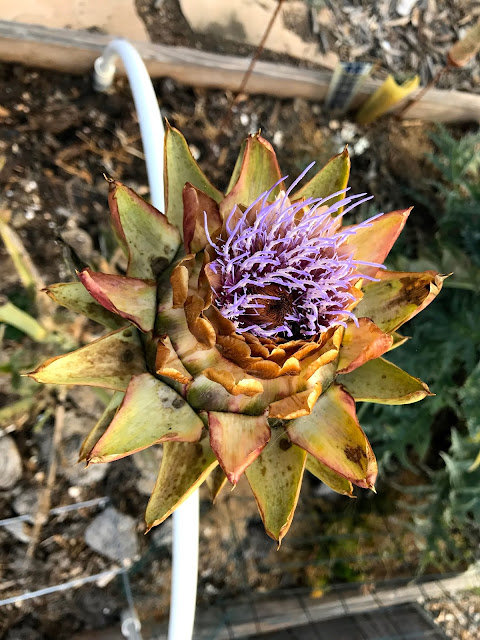 When I hear someone start off about media bias I can't help but think about people I know. There was Al Schultz the editor of my boyhood hometown paper. Al was a neighbor, his kids were my friends and he and his wife were friends with my parents. He worked at night putting out a morning paper so he wasn't always there when other dads were playing catch or grilling out. Even as a kid I knew he was smart, well read, knew history and was traveled. But we could all tell it was hard work and it took its toll. It was hard on the family when he broke a story about abuse in the jail.
I think about the cast of characters that populated the smoky din of the Times City room when I was lucky to enter that special world as a stringer and copy boy while in high school. Men and women racing deadlines, clacking at typewriters, while line-o-type machines cast hot lead columns and huge presses rolled and rumbled on the floors below.
Or my college buddies Toby and Dave who covered the police beat for the city paper in my college town while I did the same thing for a radio station. Or the friends who spent hours working to publish the college newspaper.
I think about guys like Joe Gelarden, Bill Anderson, Tom Keating, Dick Cady, Harley Bierce, Mac Trusnick, Paul Bird, Bob Bell, Mike Tarpey, Ed Zeigner, Wendell Phillippi, Bob Mooney, Pat Traub, Lyle and David Manweiller, Robin Miller, Zach Duncan, Gerry Lafollette, RK Schull, Howard Smulevitz ink stained retches from the Star or News who were friends but competitors covering government, crime and the people of a major city.
I think of broken plans, cancelled vacations, ruined days off, interrupted dinners, when called out to a plane crash, train derailment, hazardous material spill, homicide, fire, prison riot, the finding of a drowned child, a late night school board meeting, a run over legislative hearing, a citizens group meeting, meeting a source, pouring over documents, reading science reports.
I think about Bruce Taylor, Will Murphy, Fred Heckman, Bob Hoover, Bob Campbell, Ben Strout, Steve Starnes, Anne Ryder, Teresa Wells, John Stanley, Kevin Finch, Stacy Conrad, Leslie Olsen, Mary McDermott, David Macanally, Rich Van Wyk, John Whalen, Bill Ditton, Steve Sweitzer, Marlee Gintner, Karen Grau, Pat Costello, Randal Stanley, Pam Vaught, Marilyn Schultz, Neal Moore and many others who saw the work as more than just a job.
I think of Bob Collins sitting at the bar at the press club a brilliant writer destroying his body. I remember Jep Cadou, Carolyn Pickering, Hortense Meyers, Ed Stattman. I think of the late night drinks of people who devoted their lives to information while missing family or ruining marriages.
In fact there are thousands of scenes I can conjure from lifting a body from a burning plane, to waiting for cops to identify a victim, or waiting in statuary hall for a senator or congressman to appear or sitting through long hearings and trials or riding with cops or embedding with military, or talking with people for hours on end to understand their point of view, or hearing parents weep about the abuse of a child, or rage in anger at how a bank foreclosed on a home and on and on. It takes something of yourself to listen,to wait, to care, to study, to ponder, to dig, to research so that you can tell other citizens.
None of that is fake news. Never was. Never will be. It is looking for facts, truth, looking at life in its better and worse hues. None of the people who do that work are enemies of the people.
I think about the young staff of my local paper here on the Central California Coast. They remind me of myself and some of the names above. Many of you have never heard of those people. They are not New York or Washington luminaries-they were local journalists, like thousands of others across the nation. They are not enemies of the people. Nor are the people who labor to report the daily news and who endeavor to make sense of our crazy world.
We have never been perfect. We make mistakes and we admit them. 24 Hour television in the deregulated age has added entirely too much bloviating, opinion, and entertainment with the bottom line being, getting viewers, but still the work-a-day reporters, the real journalists, the newsmen and women are not enemies of the people. We could do with less schmooze and more news, less celebrity and more substance, but our habits and ways of getting information continue to change.

Trust me, please! This nation is much better off with a tough, adversarial, questioning, probing, and yes even a pain in the ass media and press corp than without. We are a much healthier nation with critics on all sides, and challenges of any president than without that tension. Probably every president has had their issues with the press and that is as it should be. That has been our history.
A free press, a robust and even imperfect media serves this nation better than any President in our history.
Donald Trump has gone too far.
bullies
Donald Trump is trying to silence critics. Remember he is the same man who used to call tabloids and talk shows pretending to be his press agent. He is more than a liar. He is a danger to our 200 some years of tradition. He is a cancer on what is left of our integrity and he is a toxin to what is left of our civility. And I suspect even if he were bright enough to understand, he wouldn't care because he is so self immersed.
Think about this. Who would you trust-a man who spent his life in service to his nation, doing hard and unthinkable tasks, devoted to the principles of a democratic republic, honoring civilian control and respecting security and military leaders or a real estate hustler, known liar, sexual predator and braggart, who will not even read position papers or intelligence briefings and who publicly condemns his own intelligence community? It is the tactic of a strongman or dictator.
John Brennan battled against our enemies. Donald Trump meets with them in secret, gives them security secrets and functions as their stooge. In the Mano y Mano match up here, it is certainly not Brennan who should have his security clearance pulled.  Read the warning signs.
Trump is treasonous. He is the enemy of the people.

evil
I hope the Catholic church will pursue with all dispatch the prosecution of those priests who have engaged in such hellish behavior in Pennsylvania. Some of those accused are now in positions of influence and power and even in the College of Cardinals.
Their betrayal of their faith, and their evil behavior should again rock the denomination to its core. The offenses are awful, but that some of the men involved are still in leadership positions, and that an organized cover up still exists is horrendous enough for a full papal retribution.

after all that, a sweet parting 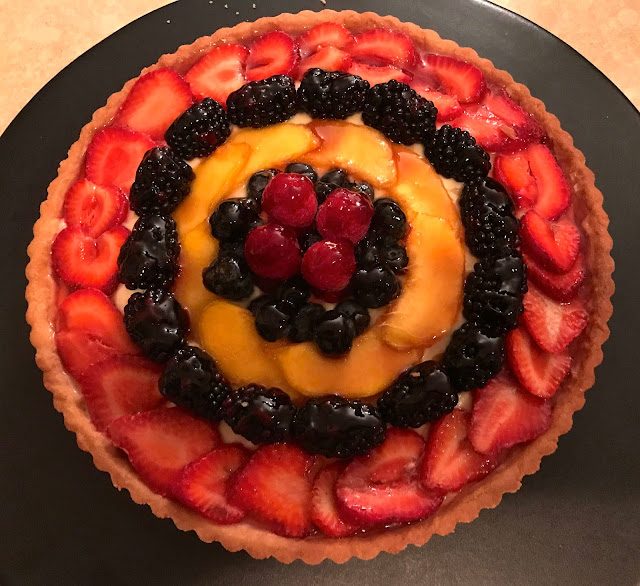