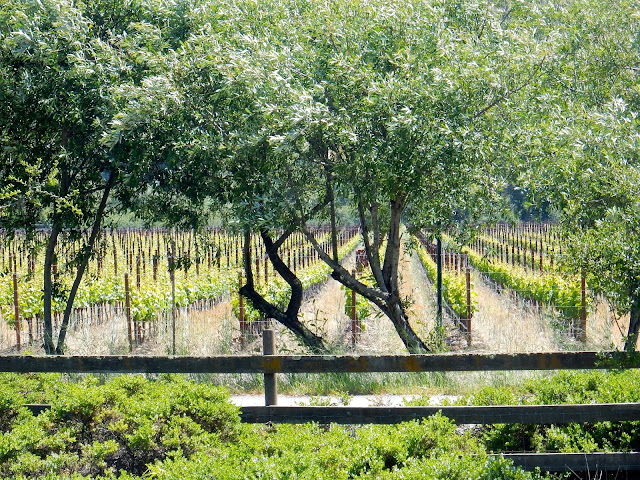 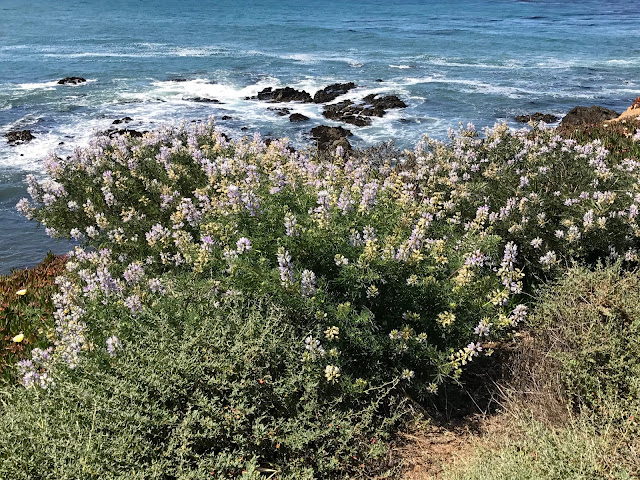 Offering a few seasonal scenes from Cambria as an antidote to the rumbling madness that angers and depresses. 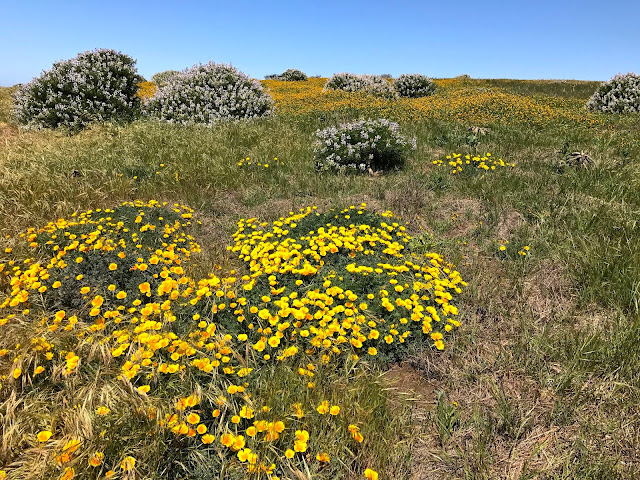 This post is dedicated to responsible fathers, especially Karl W. Cochrun. A WWII veteran with a life long interest in politics and public policy. He often invoked the famous quote "I may disagree with what you say, but will defend to the death your right to say it." 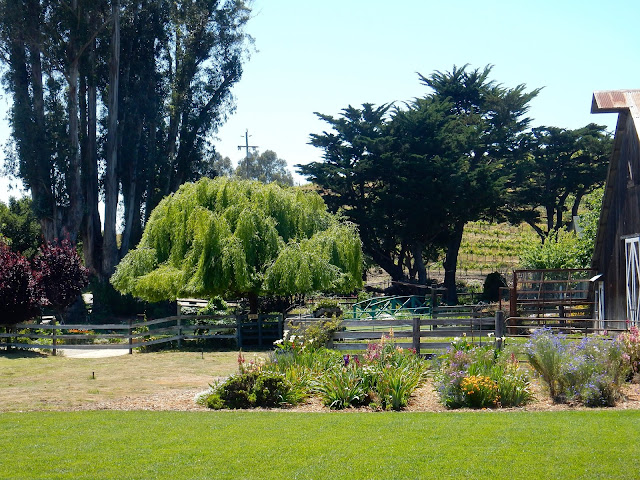 A pretty scene and a few deep breaths before we rally our senses and better angels.

maybe we should leave angels out of this
Jeff Sessions may wish he never pushed his luck by invoking the words of Paul in defending the evil of taking children from their parents.
Others have also mistakenly appropriated those words; those who defended slavery, advocates of segregation, proponents of apartheid in South Africa, supporters of Nazism, and those who would deny church and communion to people who are LGBTQ. It is counterfeit Christianity and in the past few days more complete reading and interpretation  of what Paul said about love, hospitality and the fulfillment of law from those with Ph.Ds and Th.Ds. and years of pastoring negate the preposterous attempt to defend US barbarism. It  exposed Session's malevolent intent.
I don't mean to invoke a theological debate as this nation, like this readership, has divergent views, but weaponizing words of faith is the work of bigots, judgmental zealots and tyrants. Trying to explain an awful policy in the context of the will of God is just one more warning sign.

we are seeing shadows of history

Republican Senator Bob Corker said it is becoming a "cultish thing."
Author Dana Milbank made it more pointed saying it isn't religion but a perversion. He adds "It is not the creed of a democratic government or a political party but an authoritarian cult."
As I write this I see the faces of people I know and friends, who out of desperation or hope for a change, anger, or contempt for other candidates, cast votes for Trump. They are "my surrogate" for the minority of Americans who voted for him and who still support him. They are the blood line of Trumpism.
I can't imagine any of them expected this sort of thing. As example, in the week their president staged a photo op non substantial "summit" paying homage to one of the world's despots, getting nothing in return, his attorney general tried to justify unAmerican behavior misquoting the Bible. Let me check something, the North Koreans issued a statement they have issued several times since the 90's and did promise to return remains of Americans killed in the Korean War. But even here, the Trumpism stain is evident.
Trump said that during the campaign many parents of GI's killed in Korea asked him to get their sons returned. It's another instance of this delusional man's lies. Those parents, if their GI kids were 18, and they were 18 when they gave birth, would be 104 now. Of course most of the Korean vets were older, and so would be their parents.


it is bad health to ignore warning signs

Trump is a serial liar who will get away with it for as long as those who voted for him continue to ignore the warning signs.
It is no wonder aids and staff are quitting. 51% of those who have worked for him have resigned. That is a warning sign.
Almost every respected conservative thinker, writer and analyst is reviled by the damage he is doing. Some of his own party call him a traitor, a Russian stooge, a corrupt grifter getting rich off the Presidency. You would expect his supporters to ignore such charges from Democrats or liberals, but not from people like George Will, Charles Krauthamer, and others.
Some of you were quite critical when I wrote there are similarities between Trump and Trumpism and dictators and their followers including Hitler. Nothing has dissuaded me. This man who former Republican Presidents, cabinet officers, military leaders and intelligence chiefs said was "unfit and unqualified" is getting worse, abusing the American way and our sense of justice. It is frightening so many are blind to what is taking place.

Consider what Milbank wrote
But a cult, by definition, is not about mainstream theology. I looked up characteristics of cults in the sociological literature to see how Trump’s stacks up.
□ “Presents a distinct alternative to dominant patterns within the society in fundamental areas of religious life.” Grab ’em by the p---y!
□ “Possessing strong authoritarian and charismatic leadership.” I alone can fix it!
□ “Oriented toward ‘inducing powerful subjective experiences.’ ” Alternative facts. Fake news!
□ “Requiring a high degree of conformity.” See: Flake, Jeff and Sanford, Mark.
□ A tendency “to see itself as legitimated by a long tradition of wisdom or practice.” It is very biblical to enforce the law.
Check, check, check, check and check.
And members of the Cult of Trump, formerly known as the GOP, follow him over the cliff and onto the spaceship. They swallowed their heretofore pro-life, pro-family and pro-faith views to embrace Trump’s travel ban on several Muslim-majority countries (“Such blatant religious discrimination is repugnant,” said the U.S. Conference of Catholic Bishops) and applaud him tossing paper towels at Puerto Ricans as they died by the thousands because they didn’t get adequate hurricane relief.
They’ve joined his efforts to shred food, income and health programs that help the least among us while giving tax cuts to the wealthiest. They’ve accepted his abandonment of human rights abroad. They’ve joined his attempt to end family-based immigration and to threaten deportation of “dreamers,” immigrants brought here as children.
It appeared, briefly, that things might be different this time. House Republicans drafted legislation allowing children to be detained with their parents. But Trump on Friday signaled that he would veto the bill, and, as House Speaker Paul D. Ryan (R-Wis.) said this week, the “last thing I want to do is bring a bill out of here that I know the president won’t support.” This is the way of the cult.
Will the vivid cruelty of taking babies from parents, coupled with the obscene use of Scripture to justify it, finally lead some Trump supporters to abandon the compound? God knows.

Isn't there a breaking point somewhere? I would hope those who thought Trump was sane, honest, committed to  hearing and helping them will wake up and realize he is out only for himself, as he has always been. He lied to you to get your vote.


see something, say something

He may well be the low point in Presidential history and he may have damaged two centuries of nationhood. I think that as a man he is scum. As a leader he is at best a divider. At worst he acts like a traitor, a tyrant, a Russian stooge and an narcissistic bully who trusts only himself ignoring even his own appointed advisors. Please remember one of the smartest men he appointed called the president a "fucking moron!"  When, for heavens sake, will people wake up?
We often wondered how in the world German people could permit the rise of their great evil cult of Nazism. I fear we are seeing history repeat itself. People refuse to believe the truth or they make excuses, the most common being he's just shaking up things or the media is out to get him.
Taking babies from parents and saying it is the will of God is only the latest warning sign that those specters from the past are looming over our future. Trumpism is anti American.
Traditional Republicans need to rise up, and Democrats need to be much better. Some where, some way between them we need to regain our senses and stop the perversion of America and destroy "this cultish thing" of Trumpism.
Sorry to bore you with more of this, or to beat this maybe dead horse, but I hope it helps to open eyes. And I want my daughters and grand children to know that we all have a voice and if we want our voices to remain free and be a part of a chorus in this democratic republic we have to take it seriously and to be diligent. This gang is bad for the US and its bad for the world.
How much difference is there between Trumpism and Nazism? Both seek to silence critics and undermine the credibility of science, intellectual study, journalism. They would not defend the right of someone who disagrees. My father would be ready for a fight, not unlike the one he gave years of his life to, to stop Nazism that was left unchecked by German citizens.

See you down the road.