#metoo
another kind of mansplaining
Sexual politics is shifting and changing the human landscape as undeniably as the Mud Creek landslide has changed the Big Sur coast line.
It has been healing and cathartic that victims have been able to surface old assaults and unburden themselves. It has also been a time of discussion and soul searching for men.
A longtime friend and former colleague said it well in a post  that is stacked to the right of this piece. In Bob's You've got a Lot to Learn he offers a candid voice to what should be a growing male chorus. Some of our sex, not all of us, are jerks.
From what I've read Ratner, Weinstein, Oreskes, Halperin and others are more than jerks, they are losers. Their behavior of assault or unwanted contact, public masturbation and such makes them scum among men. They are the true deplorables.
Real men, gentlemen as was once a description, do not force or coerce intimacy nor are they abusers of authority.
Full disclosure here; I am a romantic. I have enjoyed the sexual encounters in my life because they have been sensitive, sharing, mutually pleasurable, sensual in the best form of the word, kind, loving, focused and consuming. Sensual intimacy between two people can be as honest and clarifying as any thing we do.
My route to such an understanding may not be normal. My father, who was a DI and responsible for turning boys into soldiers also had to teach his charges about the venereal diseases and the sex business that awaited WWII inductees off base or in foreign climes. I got the benefit of that education, including films, as an elementary school lad. It was straightforward. My father also taught me to treat women with respect "especially when things get personal, and they will at your age."
My hormones switched on like they do when you are a teen, but I knew I probably would not be a good lover (that was an appropriate word in that era) because while I had desire, I had no experience. At the time I was coming of age I worked as a copy boy and stringer for a metropolitan newspaper. The editor made a list of the "play for pay" houses in the city-the red light houses. You may see where this is going.
My virginity was offered up to a professional who clearly understood my naiveté and innocence. Instead of being an awkward situation she made it a time of understanding, learning and initiation into adulthood. In time I also learned about the path of her life and that of others who found themselves earning a living as they did. That offered another course of learning, helpful to kid who wanted to be a journalist. It was a good course in life 101.
As my dating years unfolded relationships could develop that hinged on more than sexual ardor. It helped eliminate the objectification of women as dates for sexual conquests. Back in our day, there was a lot of that. Probably still is. When relationships moved to physical intimacy there was mutual respect and sensitivity.
We do not all share values and this is indeed a diverse world, but in personal relationships as well as in intimacy, respect is a foundation.
I think civilization has done a great disservice to men and women by creating images and expectations, rituals and beliefs, hang ups and games, attitudes and values about sexual relationships. People have been damaged, clearly. And so has that most personal of interactions. People in tender intimacy, physical or emotional, is a beautiful thing. It's a shame it can be messed up. And it seems the biggest jerks are of my sex. Like my friend Bob, I too apologize. 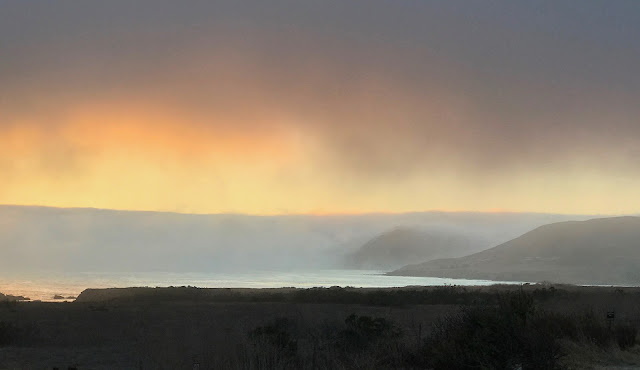 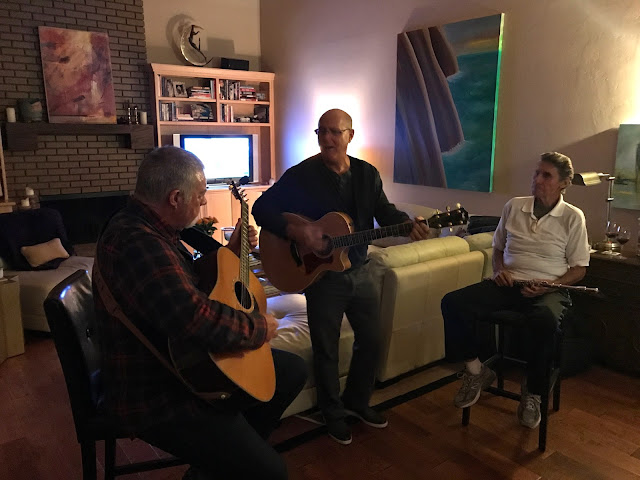 If you were around Manhattan Beach, Hermosa Beach, Redondo Beach or the LA South Bay area in the mid 70's you may recall Barabas and their lively sound.
Yes that is David Shelton, Michael David Lassiter and David Root, minus the rhythm section. They were in Cambria for a reunion of old friends that span the decades and the country. Those 3 alone make a wonderful sound. Time has been kind to their talent. 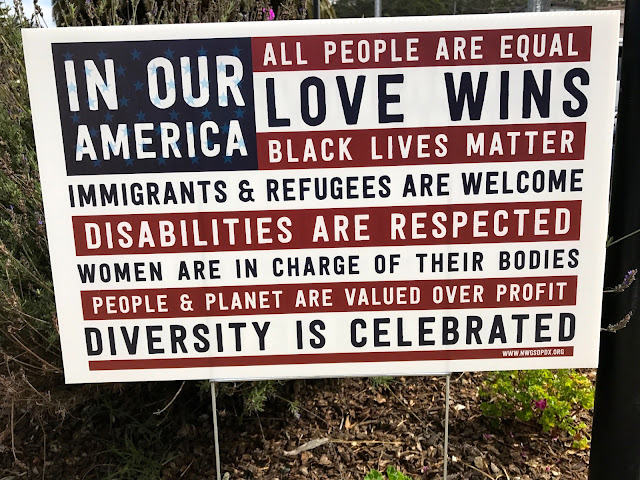 Spotted in Morro Bay at the Estero Bay United Methodist Church.
It is certainly clear the values at work here and that is a transition to King Deplorable.
For the longest time I have thought donald trump is simply a loud mouth, loutish, ego freak and idiot. I suspect the Russians have him on a hook because he is in debt to them, getting in deeply when American banks cut him off after his many failures-facts that supporters never believed. I've thought it was just about money, which in his world is his idol. However now I'm beginning to wonder if he might not in fact have been in collusion with the Russians.
trump's comment about American justice being "a joke, a laughing stock" does exactly what the national security and intelligence community have said the Russians want to do and that is undermine American's belief in their systems. Nothing does that more than when the president-illegitimate though he may be, bad mouths our bed rock virtues. It is one thing for citizen Dick or Jane to offer up such invective. It is damned near a crime for the president to say that. stooge, colluder or merely sexual predator who pulled the wool over a lot of eyes, trump is a menace. he belongs on the trash heap of history. If Weinstein, then why not trump?