A SECRET ABOUT THE MEDIA & THE TRUMPET DEBUT 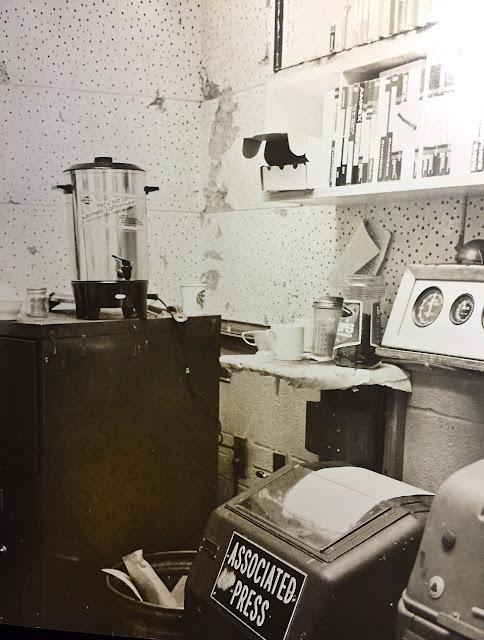 1969 WIBC Radio Wire Room & Temple of Coffee
Into the Wayback Machine boys and girls to a time before Redbull or 5 hour energy drinks, laptops or news by flavor.
Teletype machines, telephone feed lines, balance and coffee were the order of the day.
Those machines ran 24 hours a day, clacking and clanging the events of the world in a never ending unrolling river of paper. When I hired on to this news shop we had AP, UPI, a weather wire, our own weather gear and the most important item, the coffee maker.
Pictured is the "new" coffee maker and it was a sore spot in the newsroom. Someone had cleaned the previous maker, probably for the first time in 15 years and what ever they used "left a taste," no doubt the lack of whatever inhabited the sludge encrusted walls in the old brewer.
This nod to modernity came with emphatic instruction to NEVER clean it and to NEVER let it go empty. We had ground beans, favored by some and instant crystals favored by others and it all went together to create the curious, hair on your tongue taste. By the time I left for another job we had evolved a "vintage brew"  that included vestiges of a previous decade. That is how it was, and why it tasted liked it did. Coffee was our lifeblood in a 24 hour operation and our hearts beat to the constant rattle of the news wire.
We had nails on a wooden header where we "hung" the wire copy, sorting it by topics. It never stopped, and we read it all.
You can't see it, but in that wire room were the guts of an electronic sign we updated hourly.  You've seen those news tickers that wrap around buildings, giving the latest headlines. It was part of our job when we were on the news desk to write them on a special keyboard and then flip the switches so that news would appear on a major building downtown. Improper grammar or mis-spelling was embarrassment writ large, followed by a lecture from the boss in non broadcast language.
Before the digital era and lattes news rooms smelled of coffee and cigarette smoke. They were clamorous with police and fire scanners, reporter and network "feeds" coming in, audio tape being logged and edited, wire machines bells and constant keystroking, typewriters, telephones and usually at least one person yelling. It was a helluva way to earn a living.  A couple of "vintage photos follow below, but first--- 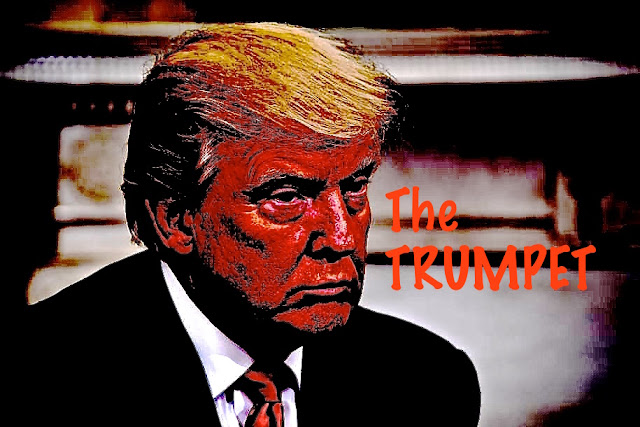 
In an outstanding, just outstandingly heroic effort, the President demonstrated how tough a Great America is when he verbally bludgeoned those damned Aussies and cut off the telephone conference.
"Tough, time to get tough. Don't worry about it!" the fearless leader told us.
In this age of lone wolf terrorism, radicalized by Isis and Putin's adventurism it's good to know the President is on target. Just think how troublesome those Australians have been! The underpinning of our many woes.
Kick their Ass, Donnie, kick their ass. Best ever conversation with an ally!  Outstanding!

The President's success in "reality" television gave him a little juice in announcing his nominee to the supremes. For years we've seen the nominee stand along side the chief executive. Donnie does it differently- a little suspense, no shared spot light until.... up pops the judge. The showman in chief couldn't contain his glee "That was good surprise wasn't it."  Keep asking Donnie-you had the best ever, everyone knows that. Largest audience ever for a nominee announcement. The best!

but oh those enemies in the crooked press
Republicans and Democrats have reacted to reports the Trump White House told the congressional staffers it called on to help with the controversial immigration order they had to sign non-disclosure agreements. Members of both parties say that is a serious breach of separation of powers. Some reports said it is a troubling sign of paranoia in the new administration.
Careful there press, do you think you have freedom to question Der fuhrer entertainer in chief? He is the "only person" on earth who can fix our ills! He told us that. Can't you remember anything? Pitiful. Crooked press! 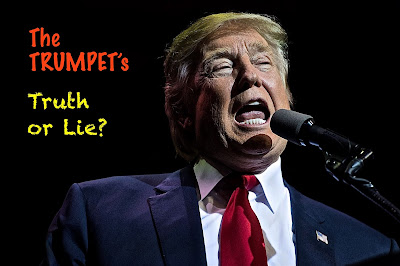 Today Donald Trump invited the physically challenged reporter he mocked during the election cycle to Trump Tower. After a humble apology by the President the two enjoyed lunch and polite conversation. Trump then handed the reporter an envelop that contained a check for $50,000 made out to the charity of his choice. The two shook hands and promised to keep in touch!

How will the Democrats respond to the Gorsuch nomination?
A) Will they be big boys and girls and give the nominee a fair hearing?
B)  Will they be like Republicans and create a political obstruction?
C)   Will Charles Schumer act like Mitch McConnell and declare no nominee hearing?
Our Bonus Question-How does McConnell speak when his head remains so deeply implanted in his lower descending colon?

Tune in again some time for another edition of THE TRUMPET.

we called it reporting 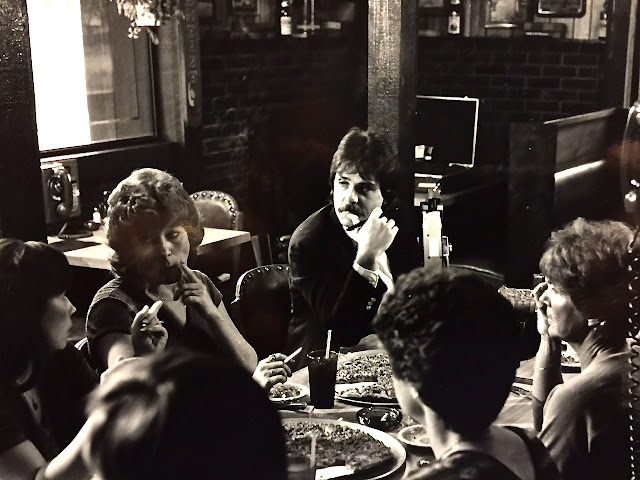 It's clear that Trump was about the only person who "noticed" the pain of millions of under or unemployed workers and they ended up being the edge in a few states
The Clinton campaign ignored them, so did everybody else-media and pollsters included. Much is to be written and said as historians review the 2016 campaign, but it's been a long time coming.
Media has become more about audience size and entertainment than journalism. There are exceptions but are too few and far between. You may recall when David Broder of the Washington Post or David Brinkley of NBC would travel off into the country to listen, "mood of the electorate" pieces they were called. They set the standard and most serious news organizations did something similar. In fact it was the backbone of old fashioned reporting. Get out of the newsroom or studio, get away from the government bubble and go listen to people, citizens. That was what we used to do and how we knew what people thought and felt.
Someplace along the line, probably a non journalist decided the world needed a fancy set, with pretty anchors and yakking, squawking, ego's-call them analysts-telling us what they thought. Modern political campaigns are also frequently hapless. (Think how much the 19 Republicans and Hillary Clinton threw down the drain.)
Well, we have lots of famous and wealthy fools these days don't we?

they were called typewriters

Found this in the Wayback machine, a contact sheet for an ad campaign when Karen Dillon and I were "working" news anchors at NewsCenter 13. By the way, we did write and report and leave our not so fancy set to go listen to people.
Then we came back and used an antique called a typewriter. I trust most of you remember those? 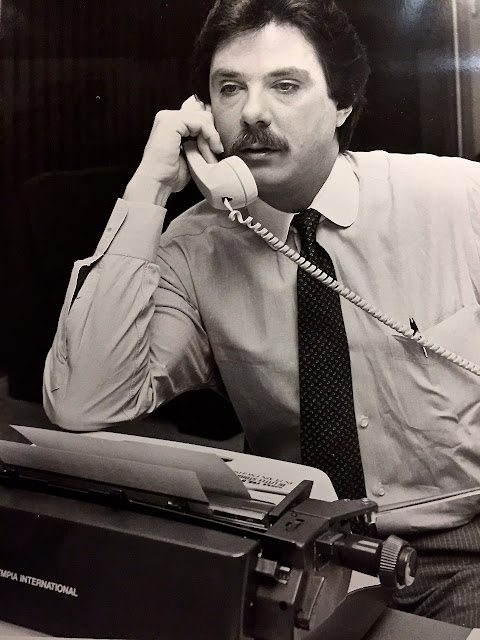 another of those "great haircut" shots to amuse the grand daughter

They were great for leaning on as we used that other appliance, the one with a tail, a telephone.  Amazing what you can learn by listening.
Indeed it was a great way to make a living.