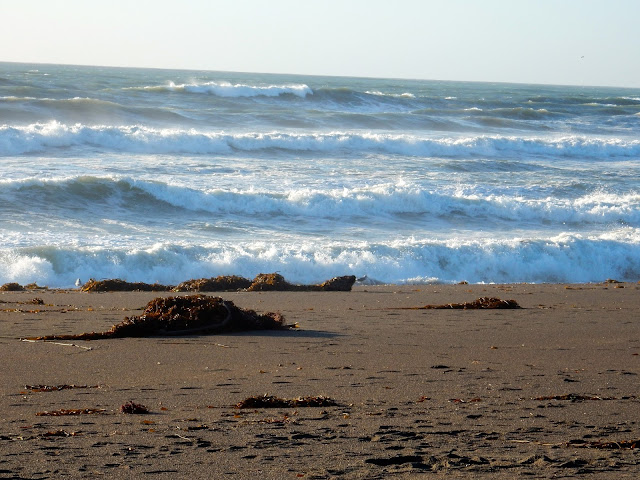 An eerie thought occurred as I watched the meteor shower splashing the sky. While it's not for everyone, I'm lucky to live where it is dark, very dark with a minimum of light and light pollution. I joke with my friend Frank, back in beautiful Falls Church Va, that I moved west to watch rockets being launched (Vandenberg AFB) a particularly spectacular sight because of the dark sky. Actually the sky is not dark, it's deep and rich and so full of stars it has dimension and space has a shape and texture. So on a recent evening I'm on the deck watching the zips and streaks and the next night I'm soaking in the spa when it dawns on me how extraordinary it is that we escape being hit by all of these flying icebergs and chunks of rock.
It's not the kind of thought you want to sneak into your brain before bed time, especially if you tend to be anxious I suppose. There is a ton of stuff flying out there and of course science tells us this blue planet has been nailed before, probably several times. So from this land where you watch rockets, real cowboys, surfers, enjoy the beauty of vineyards and breathe Pacific air it might not be surprising that one begins to contemplate space ship earth and it's delicate fragility in a cosmos that goes beyond the bounds of rational and finite thought. Beyond finite, that presents a problem so we come up with infinite. Where precisely does infinite begin to be infinite, and what does it mean that it never ends?  Actually, don't give either of those much thought or you may find yourself drooling in your shoes. Still we can ponder how lucky we are that our course has, for the last few thousand years at least, kept us from a head on collision with a space brick or mountain.
I wonder if we spent more time looking up, or wondering about cosmic eventualities, if we wouldn't be a little nicer to each other and to our planet and its limited resources. Greed, malice, hate, anger, war, zealotry and all of that kind of behavior would look pretty barbaric and primitive to someone looking in from way up high. In however long we humans have been jogging around this globe we never get far from acting like lower animals hanging around a swamp. Despite what our better minds and loving souls have done, a lot of homo sapiens act like thugs or brain washed lab animals. I saw a great cartoon that had God sitting and looking through a scope at planet earth.  He says to Jesus or an attending angel-"If it weren't for the dogs, I'd have blown up that place  long ago."
Well, it seems we got lucky in this last Geminid meteor shower, spared again.  Wonder if we could evolve a bit more or make some personality improvement this Christmas season? 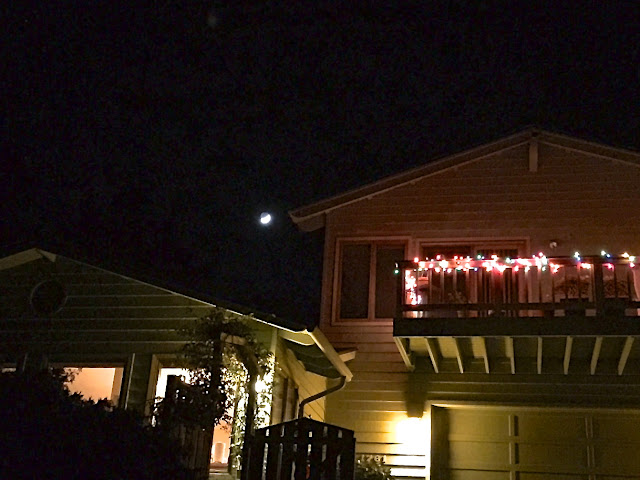 Once the kids are no longer in the house a little of the Christmas magic goes with them. Still we pull down the boxes  from the attic and Lana transforms normal to the festive spirit of the season. She's talked about getting a smaller tree and we may do that, someday. The tree is a direct cerebral link to family Christmas' past and especially one on South Ebright Street in Muncie.
I must have been six. It was the first year the big time magic of the season etched into my little brain. The scenes are still indelible. Our little two bedroom VA financed home looked out at a street light that during this season seemed always to be wrapped in swirling snow. A real life snow globe! The tree was strung in those big old fashioned colored lights. Mom, no real artist created a Bon ami snow scape scene on the living room mirror and the window in the front door. I thought they were shear beauty. We had a record player, not a high fi, but a little player with speakers attached and I played needle drop over and over and over on Silent Night and Gene Autry's Rudolph the Red Nosed Reindeer. Life could never be more perfect, so full of pure joy and wonder.
So, I still like Christmas trees. When we were first married we could spend hours, canvassing several lots for the "right tree."  Now we go the garden center, look for one in our height range and bingo bango pick a tree with almost no hesitation. 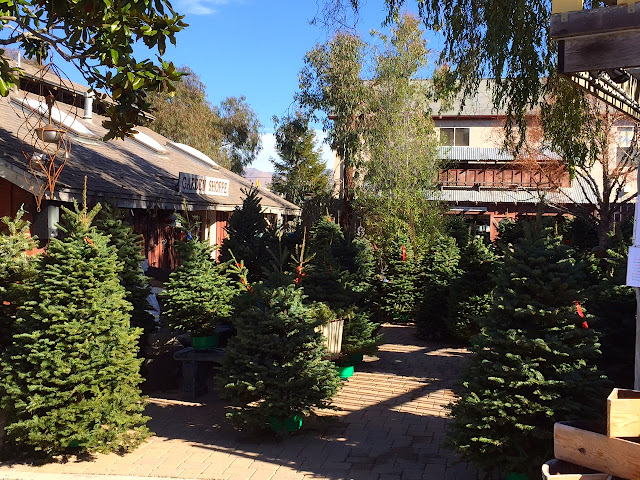 A little crooked? No trouble. A little uneven? No problem. 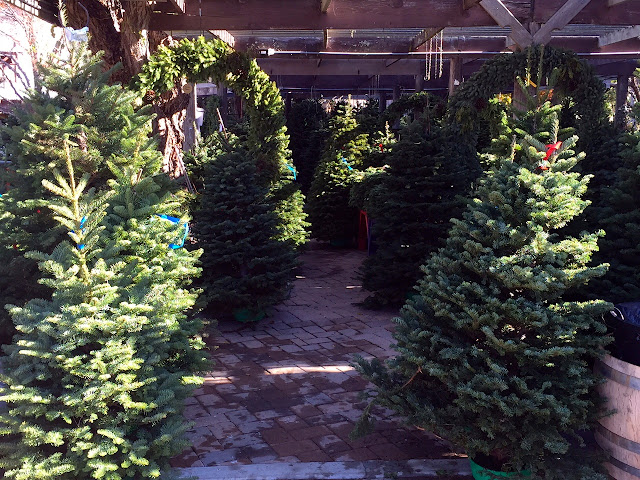 No matter, the noble green is worthy of holding the ornaments and memories and taking its place in the long line of trees in our Christmas dreams. There was a time we  planted live trees. It's rewarding to think of how tall they've become and how many seasons of light and hope they've shared.
LIVE WATER 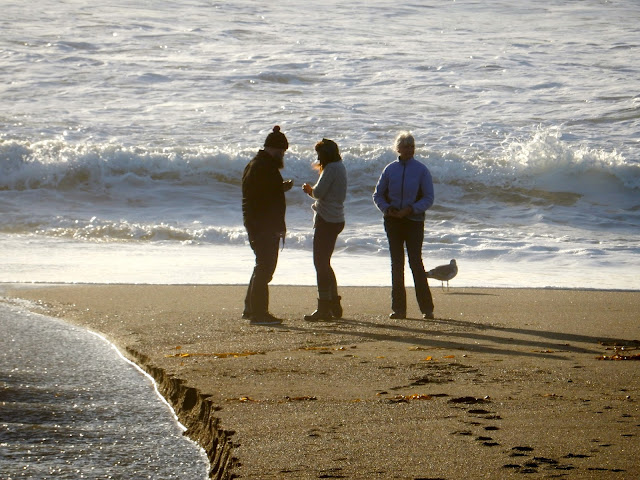 Rainy season has begun and with promise we'll make a dent in the drought.  Here Santa Rosa Creek makes entry into the Pacific on Moonstone Beach in Cambria. 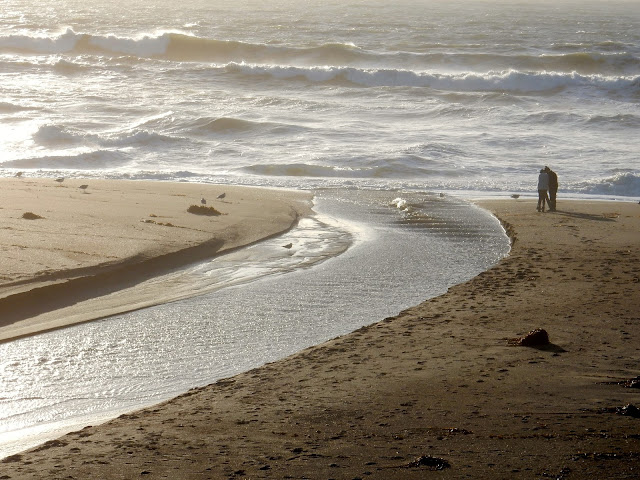 Bryan Cranston as Dalton Trumbo is enough reason to see this film. He's extraordinary, again. But so is the film about the tyranny of the "black list," right wing thought police, cowards and hate mongers and the courage to speak your mind.
The bad guys, as they truly were in the dark era, are John Wayne, Ronnie Reagan, Hedda Hopper and weasel politicians on the House Un American Activities Committee.
Unexpected heroes are Lucille Ball, Kirk Douglas and Otto Preminger. This film, based on fact, is full of great performances including, Helen Mirren, Louis CK, Diane Lane, John Goodman and Elle Fanning. Director Jay Roach and screenwriter John McNamara attack the difficult question of how free can and should we be to think and speak. This is an intelligent script and is probably too much for some to think about it. But has history reveals, it should be thought about. As some current politicians demonstrate, maybe it could happen again.
Trumbo is American history and civics, warts and all.

As Lana told our daughters, "This is the kind of love story I like."
It is also a great telling of the kind of transitions many of our relatives made, though this time the back drop is 1950's Brooklyn.
A splendid cast makes every moment a delight. Saoirse Ronan as the Irish lass is magnificent and those blue eyes are hypnotic. Jim Broadbent is a quiet master as his Father Flood is proof. Julie Walters as boardinghouse manager Mrs. Kehoe and Emory Cohen as the boy friend Tony both fill the screen-Walters with those darting dark eyed looks and Cohen with a smile that shines.
Sweet, tender and uplifting-Brooklyn is a perfect "date night" film.

See you down the trail.
Posted by Tom Cochrun at 10:02 AM