ABOUT A WOMAN AND WOMEN

Pay attention to the women in your life. Treat them with kindness, tenderness and affection. That in essence was an early lesson from my father.  He is the man who always made a point of kissing my mom when he returned home from a day at work, and always before leaving.  Not just a peck, a real kiss. There were times in my life when I was embarrassed by it.  I grew out of that.
He was always quick to compliment my mother on her appearance, the meal she had prepared or something she may have said or done in a group or professional setting. He always had a good word for his mother or her sisters, all of whom were English, properly presented and sticklers on good manners.
So now I brag for a moment about Lana, who's art and gardening have been the subject of previous posts.  This is a more seasonal praise.  She has been baking bread for some 40 years and in that time has become a true master.  But this holiday time of the year, she hears an even different call.
A BUSY KITCHEN 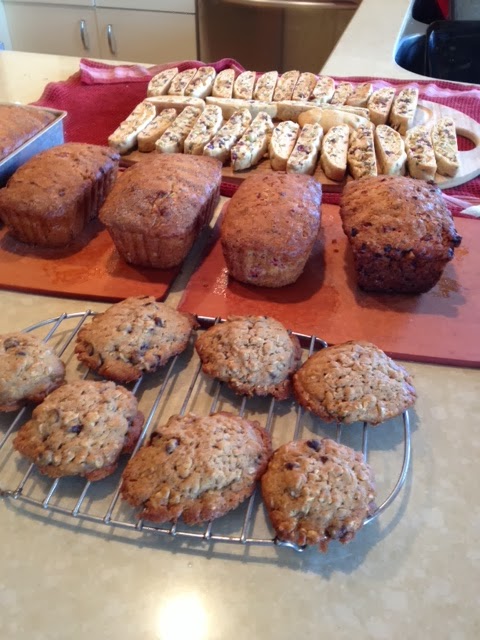 Here is a representative sample of her efforts a couple of days ago.  There was more of everything, but these were captured before they too were boxed or gift wrapped. Biscotti, cranberry bread and oatmeal chocolate chip cookies. Nice to look at, but even better to taste. An incredible output you may think?  Well, on this day she also baked her regular bread and made pasta!
There are also chocolate covered orange peels, spicy almonds and sugared pecans, come to life on a different day.
It is amazing that in all the effort, and there is a lot involved, she is humming or singing and operates with the efficiency a finely tuned factory. I get tired simply watching her, but she moves like an athlete.  I do my part my sampling.  And there is a later shoulder massage, well earned. 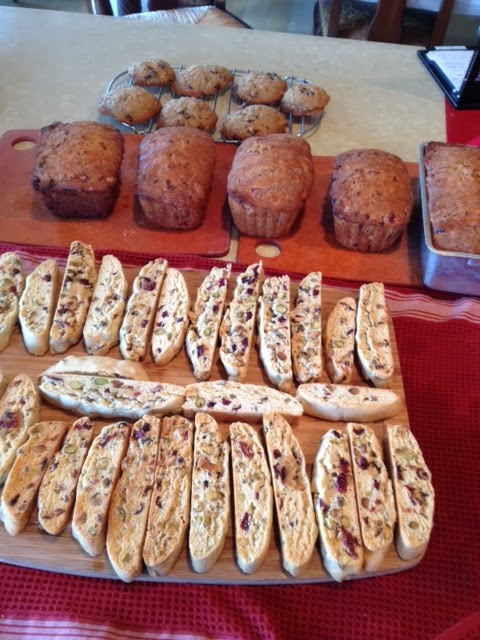 American Hustle is a brilliant film adventure and it is no wonder it's gotten a lot of buzz.  The acting is the brilliance!
It is a "somewhat truthful" retelling of an odd moment in American history, ABSCAM, thus a good story. It is well directed by David Russell and made entertaining by its capture of time by wardrobe and bad haircuts and amusing. But the acting sells the deal.
Christian Bale, Amy Adams, Jennifer Lawrence, Bradley Cooper, Jeremy Renner are all-have I used the word-BRILLIANT. Louis CK is perfect in his supporting role and Robert DeNiro turns in a short but stunningly haunting role.
This is a fun and captivating entertainment and I suspect you'll leave the theater talking about how good the cast was.
If you are interested in such facts, Amy Adams and Jennifer Lawrence are dazzling beauties. I notice these things. Again it goes back to my dad, who while always an English gentleman-he was raised that way-truly enjoyed the company of women and they were comfortable with him.
He was chivalrous and sensitive. My memory is somewhat hazy, but it was fortified by mom's recounting. When I was a wee one, dad taught me how to wink, using the women of his office as my training partners.  Never a full wink, like a blink.  No, as he was in teaching me basketball skills, he was specific.  A real wink needs to be subtle, a gentle motion to be seen only by the recipient.
As I recall a wink toward a blond coed led to something that more than 40 years later leaves me with a partner I gladly kiss on arriving and departing. And who does things in the kitchen for which there are not enough compliments.
Maybe you are shopping for a new year's resolution-pay attention-work on your wink and as Otis Redding sang "Try a little tenderness...."
See you down the trail