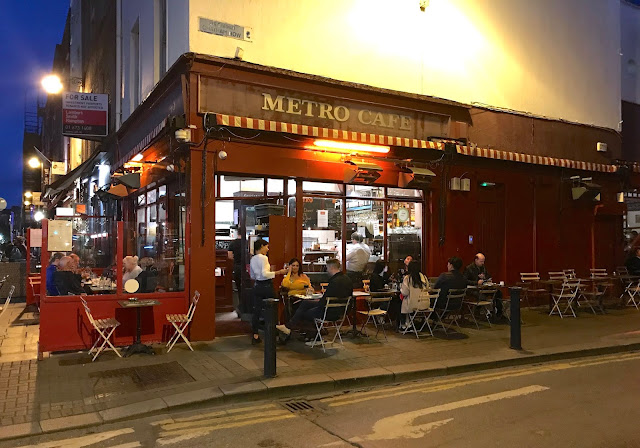 The truth is we walked into a few. Hard to visit Ireland and

and Scotland and do otherwise.
Pubs are something special, culturally historic and important. 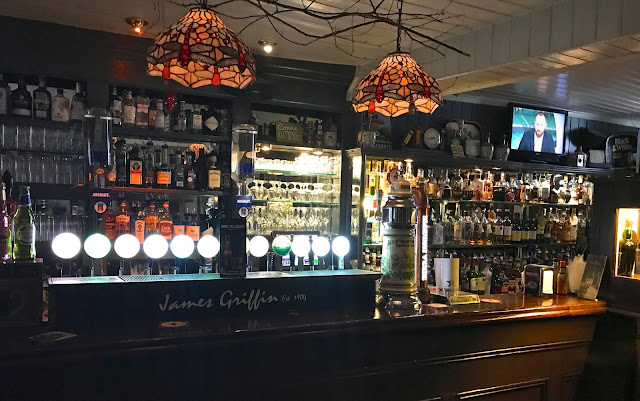 But the point of this post is to tell you about two nights in particular. 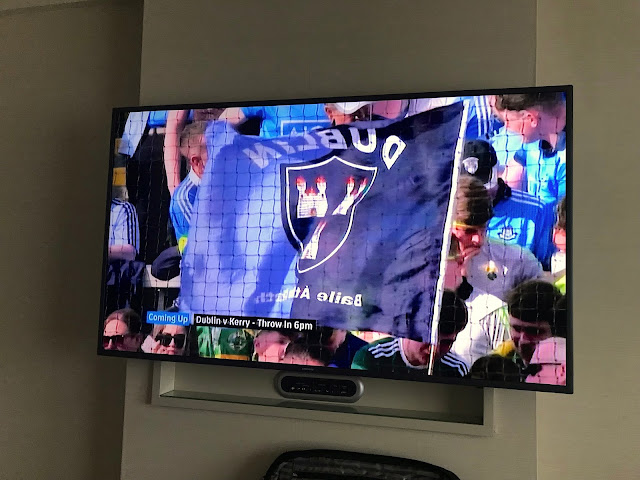 We were fortunate to be in Dublin on the day of the Irish National Football Championship. 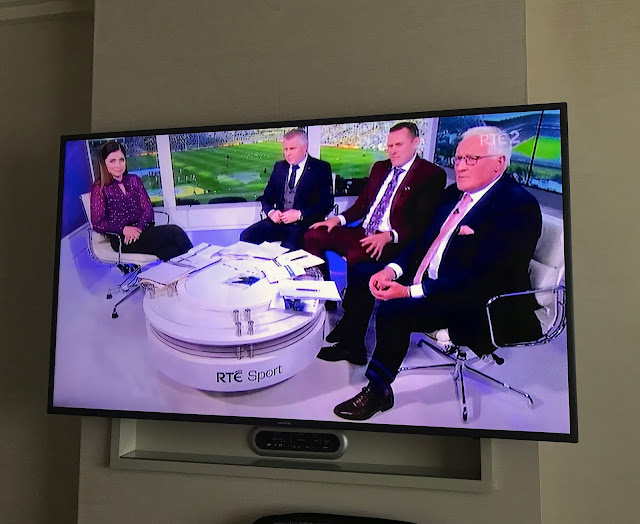 This is Irish football mind you. It's an extraordinary game and you'd do yourself a favor  to look up a couple of video clips and see how the game is played.
I would have loved the game as lad. As an old boy I was delighted to see it played. It requires skills found in soccer, rugby, basketball and even touches of American football. 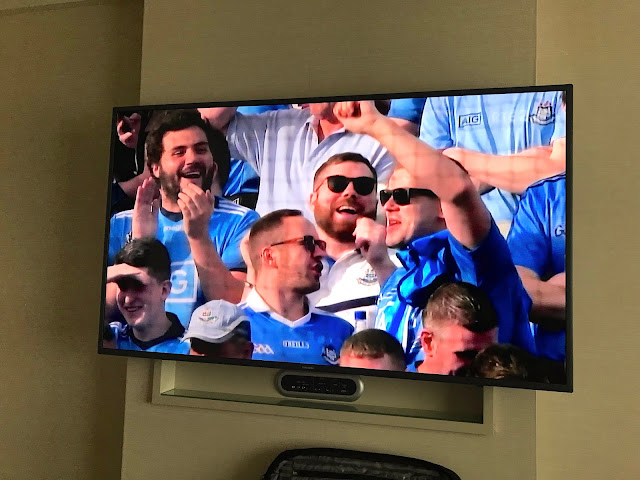 The national championship is huge-"It's our Super Bowl," my friend and host Jack reminded me a couple of times. 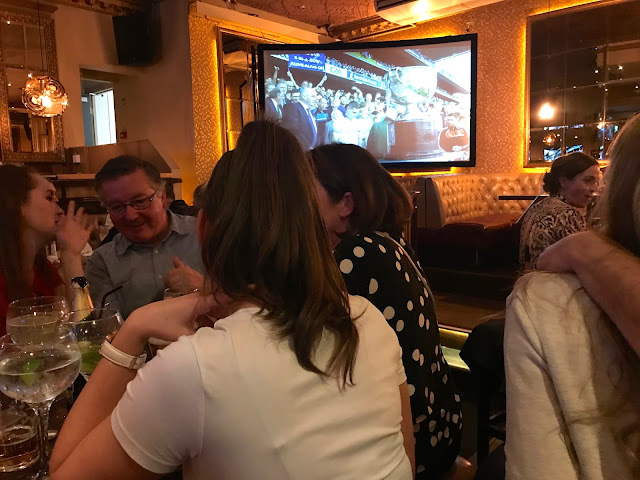 Walking from our hotel to where we set to meet Jack and Kay, every pub was jammed to the sidewalks, speakers were playing the pre game, and you could say Dublin was electric. 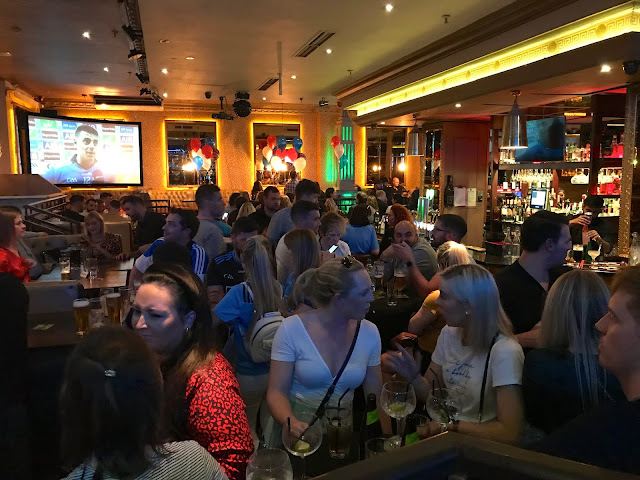 It was Dublin vs Kerry in the replay--they had tied in the first championship game and this was the decider. Dublin has been on a bit of a roll in the last few seasons, but historically Kerry has been the big winner.
It seems that almost no one is uninterested, and with good reason. These are amateur athletes, school teachers, pilots, lawyers, businessmen, truck drivers  and farmers and the like. They practice during the week and on weekend, they put on the colors and have at it. 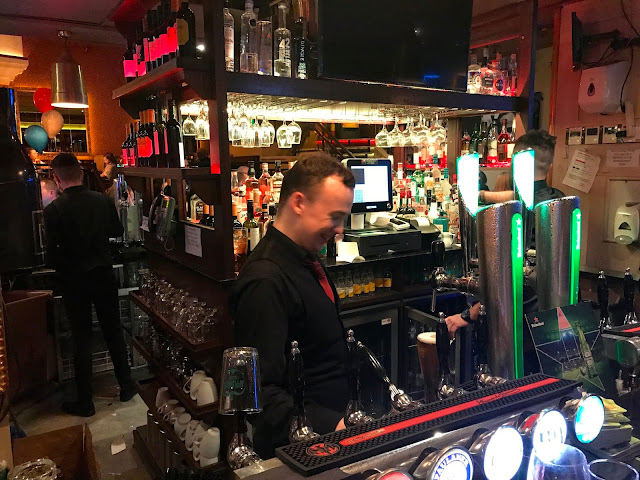 Something historic happened here, in this pub on this night. They ran out of Guinness. They ran out! The taps went dry!
Kay, an Irish lass said in her entire life she had never heard of an Irish pub running out of Guinness. And on the night of a national championship, no less!
I was crestfallen, but soldiered on by ordering a whiskey, of which there are many great brands.
At some point in the match there was a commotion at the door that was greeted with loud applause from the crowd. A couple of gents were rolling in kegs of Guinness. They were getting a grand round of applause.
As aficionados know, Guinness is brewed in Dublin. 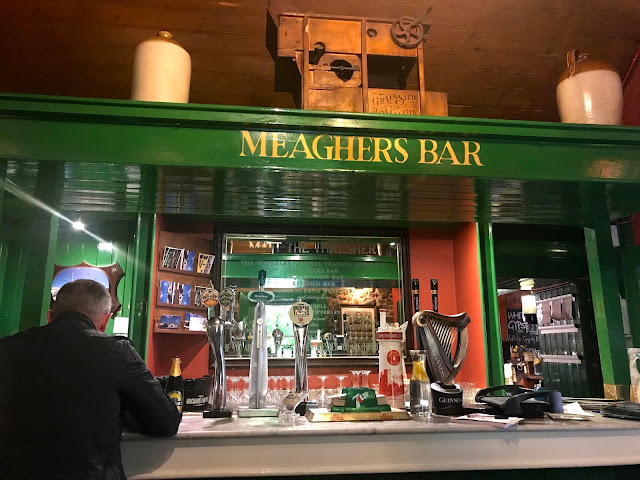 Between Dublin and our south western destination of Dingle, there are many other pubs and of great variety. 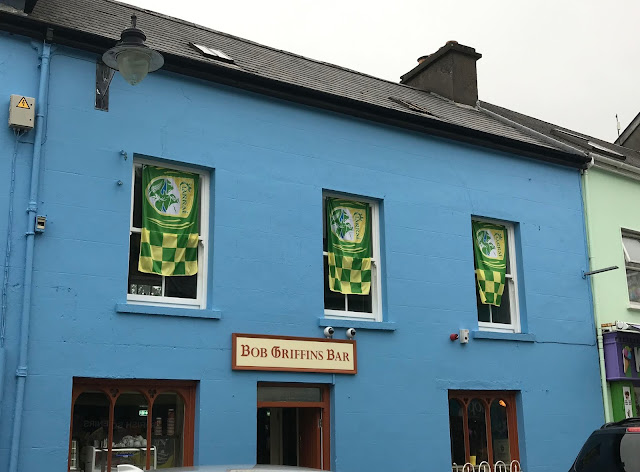 But there is one that looms large in our memory. It's near the court house in the wonderful and charming sea port of Dingle. 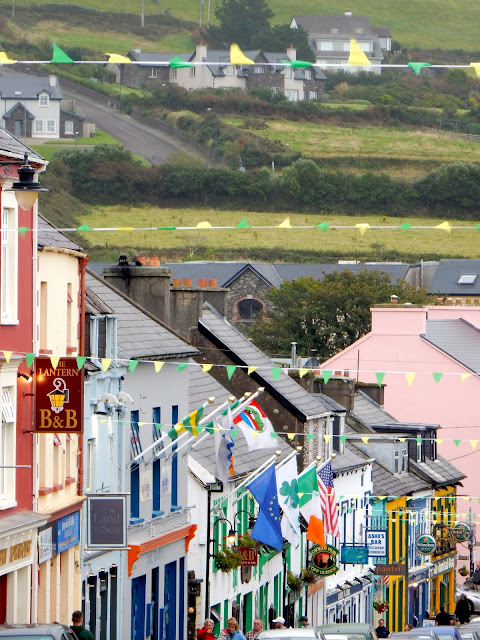 My lifelong friend Jim, of Irish heritage and an accomplished musician, told me about a mind blowing place he visited when in Dingle the year previous. It was Tommy O'Sullivan's place. O'Sullivan is a renown player and the pub is not so much a place where "shows" are put on, or where people do "performances." No, it's a pub where musicians hang out and jam. A gathering spot for music lovers. 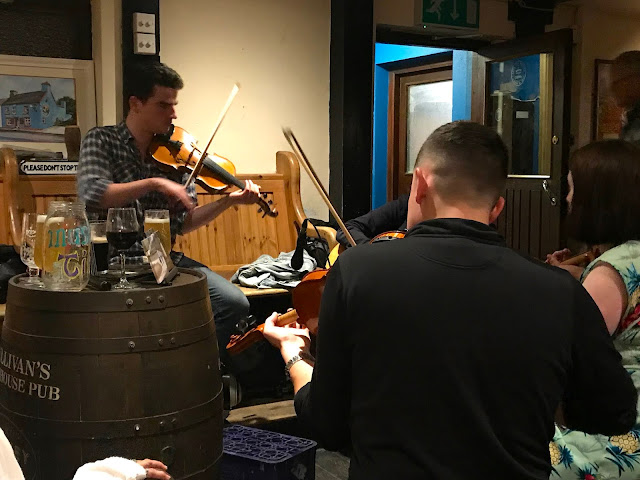 Some tourists surely must find their way there, but it's truly  a mecca for Celtic, traditional, Gaelic and even Bluegrass players. And for the locals who love the music. Lucky folk they are! 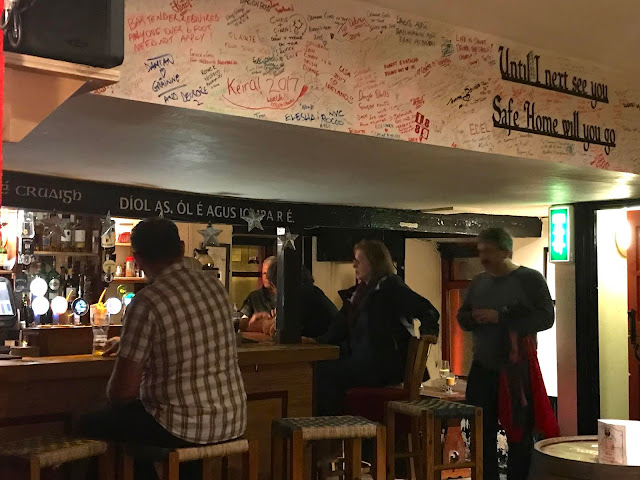 People were jammed in, standing room only when we entered and people were queuing for seats near the players.
A local gent turned around to me and suggested that Lana, Kay, Jack and I, take seats next to the players and Tommy's wife, their dog and the other players. It was right up front.
The kind man and his party had been waiting for open seats but he somehow knew this was a rare moment in our lives and so he offered a dose of Irish hospitality. 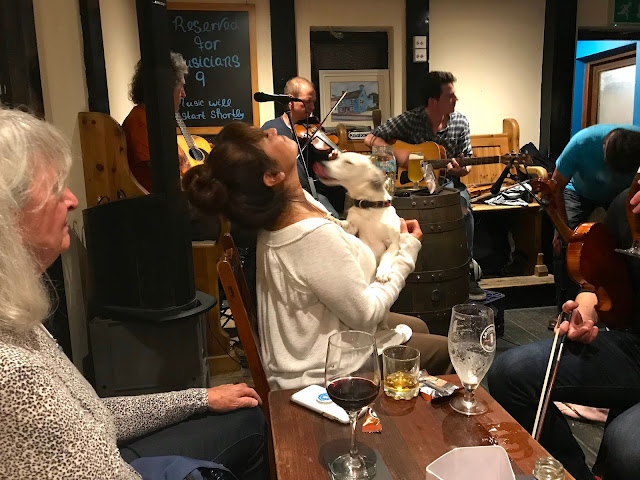 That's Tommy on the left side, with his back to the wall, guitar in hand. Some Scots players were up with him at the time. 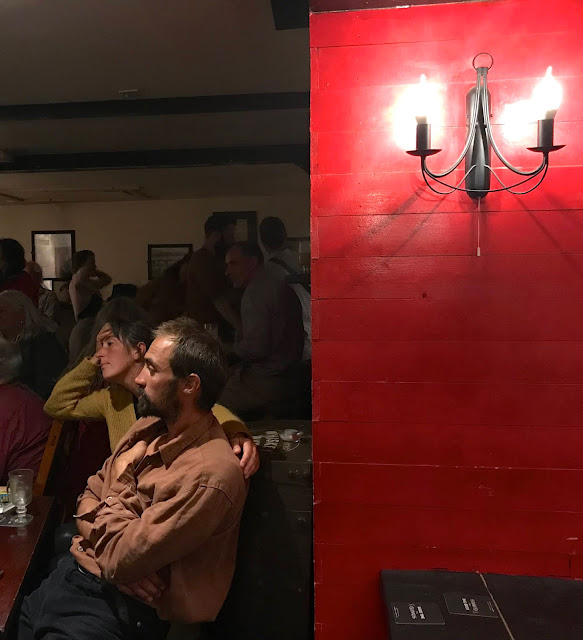 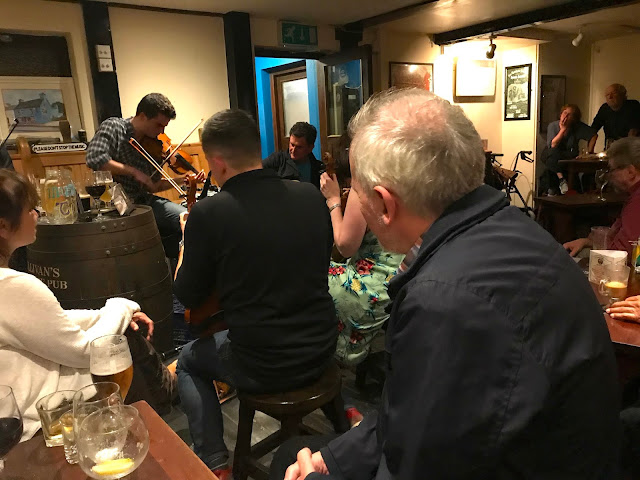 Memories for a lifetime and some of the most skilled playing you'll hear in several lifetimes. Thanks Jim for the tip and thanks to the man who gave up seats to put us "ringside."

There's another pub we'll walk into, coming up as we visit the extraordinary Dingle and Dingle peninsula.

See you down the trail.
Posted by Tom Cochrun at 2:48 PM