The Last Of The Old Boys... 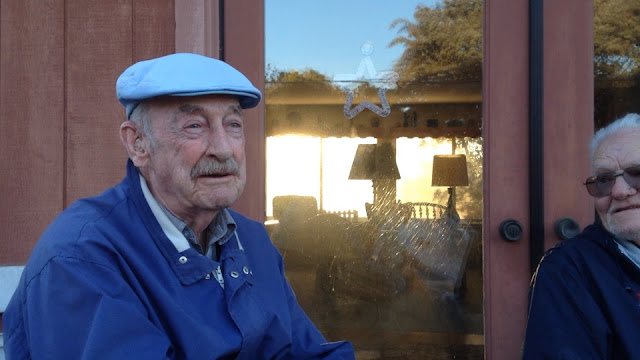 Calvin Coolidge was President when John Angel was born and though he had reached into his advanced years he never lost a sparkle in his eye, or zest for a good joke. That long and good run has come to an end. 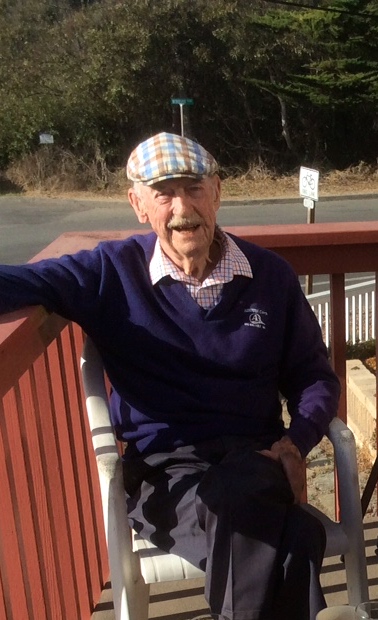 John was the surviving founder of a group that gathered each Wednesday and Sunday at 4PM for a cigar, coffee and friendship. 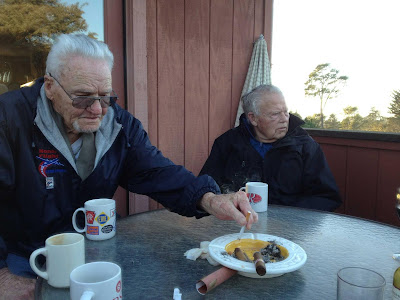 Phil Allen and Reg Perkins were the other founders. John, Reg, and Phil cultivated the friendship and grew the group for some 30 years. 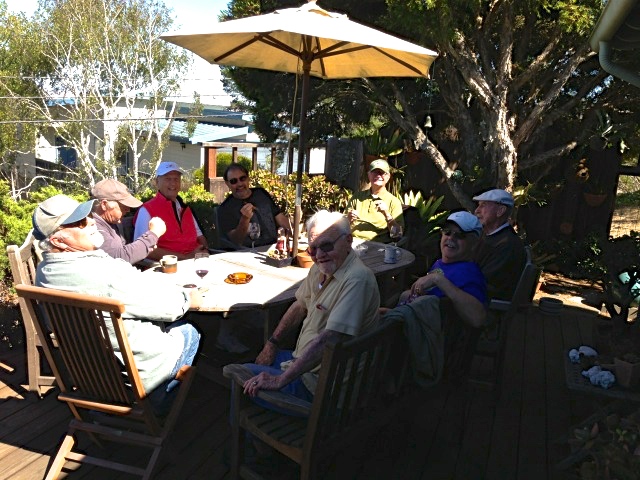 Phil invited me into the group when I showed up in Cambria in 2007, a recent retiree and knowing no one in the village.
It was the place to learn the local lore and ways, find the best plumber, electrician or repairman, hear great stories and  hilarious jokes. But mostly it was about friendship. 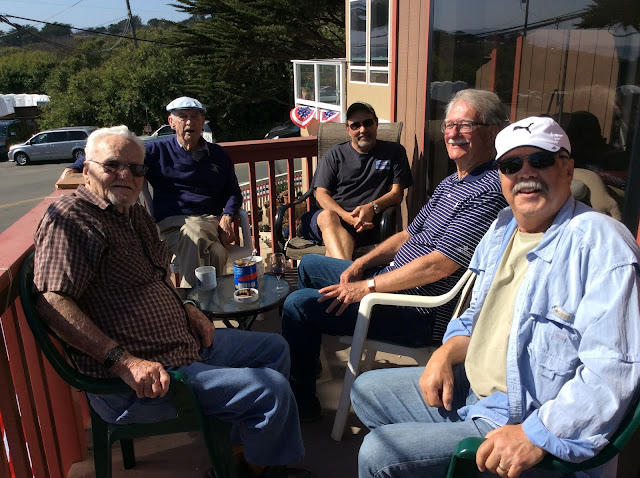 A WW II vet, John had been in sales, he called himself a peddler. Also a vet, Reg had been a battalion chief on the LA Fire Department. Phil had been in sales and one of the smartest investors anywhere. 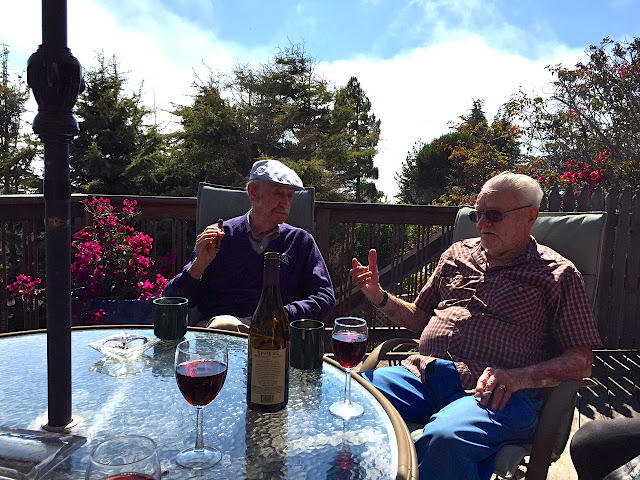 But these old boys were active. John and Reg served on the local government board. They were officers in a benevolence society that did charitable giving, the Odd Fellows. Reg and his wife founded the annual Easter Egg hunt, and Cambria's Anonymous Neighbors, a group that delivers medical supplies, operates a community bus, drives people to medical appointments and more. Phil was  active in his church and a significant philanthropist. Up to just a few of months ago, John still hosted a community forum, was secretary of the Odd Fellows and drove errands for people, as he approached his mid 90's. 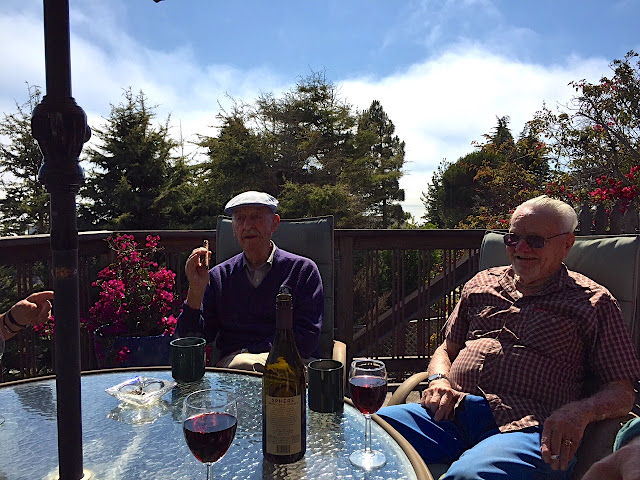 Phil called it the "prayer meeting" though his wife Nan called it "smoke and joke!" Eventually it became a Sunday afternoon only gathering and some of the younger recruits introduced wine.
These guys were role models for we boomers. They filled their years with meaning and never lost the joy of being with the boys or enjoying life despite losses, illness and setbacks.
Phil was the first to go. About a year ago Reg just went to sleep in his favorite recliner. Ray, Dick and I went to visit John last week and were shocked by his decline. We had seen him just 4-5 weeks earlier and though slowing down, he was still full of sparkle and good wit.
These men were my first friends as I entered a new chapter of my life.
After John lost his beloved Sally several years ago he was over at house for dinner. Lana asked him if he could cook.
Not at all he said.
She asked if Sally had a crock pot.
Yes he said and she had a freezer full of meat as well.
Lana gave him instructions and for years when he hosted our Sunday gathering, his house was fragrant with his latest crockpot "creation."
John had a way of making his presence know, did not suffer fools easily, spoke his mind, volunteered most of his days and loved a good story, and especially the time with "the guys."
We saw pictures of John when he worked for Westinghouse and was a pitchman for one of their divisions. He looked like a David Niven marquee idol. He was always nicely turned out, though the guys kidded him about his white bucks, that may have been as old as some of us. His WWII uniform still fit. He was proud of eating broccoli everyday. And he missed Sally something terrible. 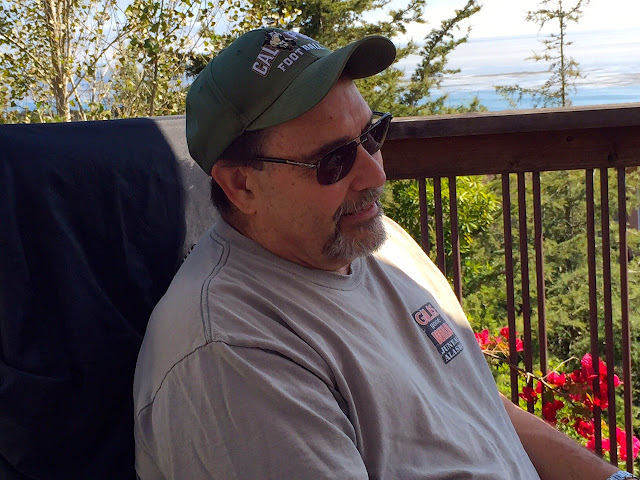 Ray, part of the youth movement 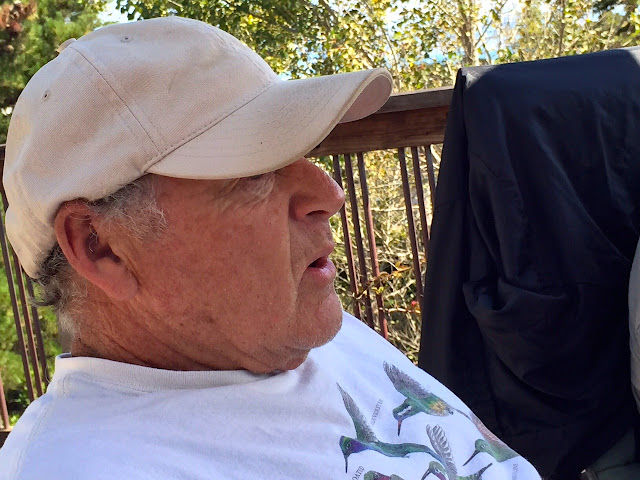 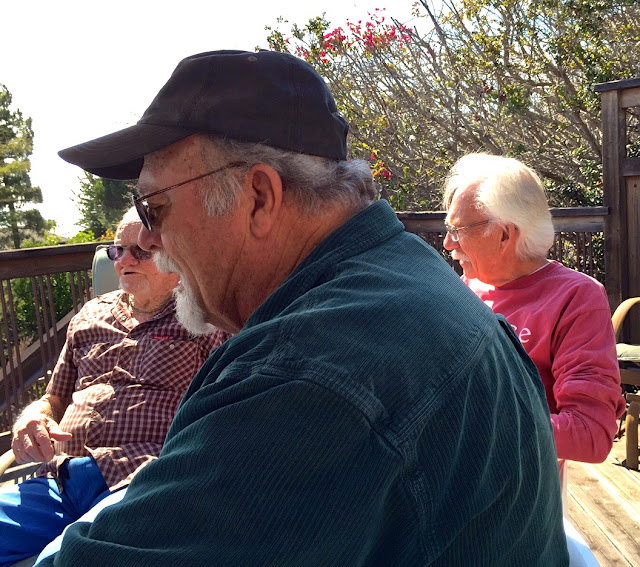 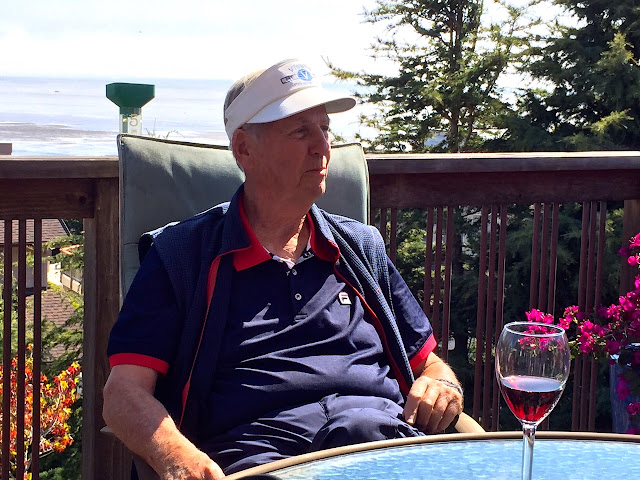 Paul-the class of the group

Bill, Dick, Ray, Paul, Griff, Gary, Glen and I should gather one of these summer Sunday afternoons and pay tribute to our "three Musketeers" and we should keep going "the prayer meeting" smoking, joking and all. Friendships never end. 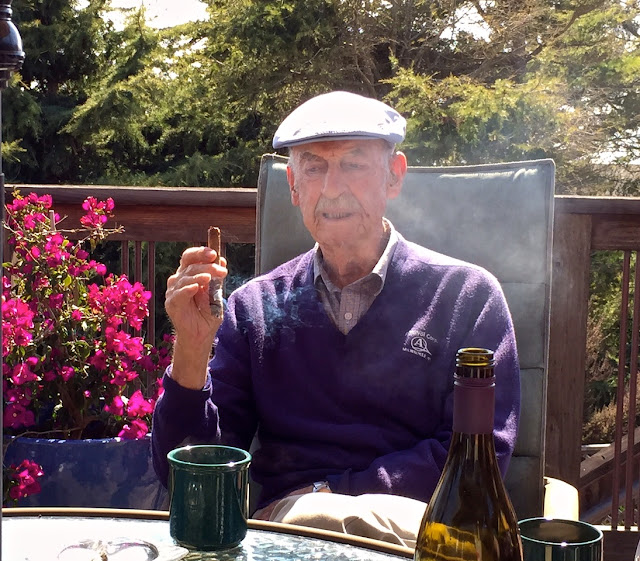 Letting you in on a little secret here-John was frequently  kidded about always smoking his cigar in an uneven and precarious manner. He's caught here looking at yet another uneven smoke, for which he was again unapologetic!
Rest in peace old friend.

See you down the trail.
Posted by Tom Cochrun at 2:01 PM