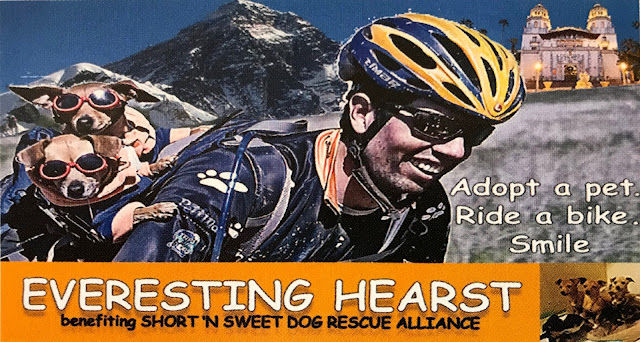 It was one of those direct to the heart moments. Standing before the group, explaining his goals for "Everesting Hearst," the young man said his goal in life is to contribute $50 thousand  to charity before he passes.
I was moved. Live your life in journalism and you hear a lot but I never heard someone measure their life by setting a goal to give to charity.
To date he's donated $19 thousand. He's stuck on it hard and working on meeting the $50 k life's goal.
Here are some extenuating factors. He makes a spartan living as a kayak outfitter at San Simeon beach. He's been a camp director, competitive runner and mountain biker, and never earned much. He says he's not interested in earning a lot of money, only enough to feed himself and his dogs and hit his charitable goal. He is Cubby Cashen, beloved by those who meet him. 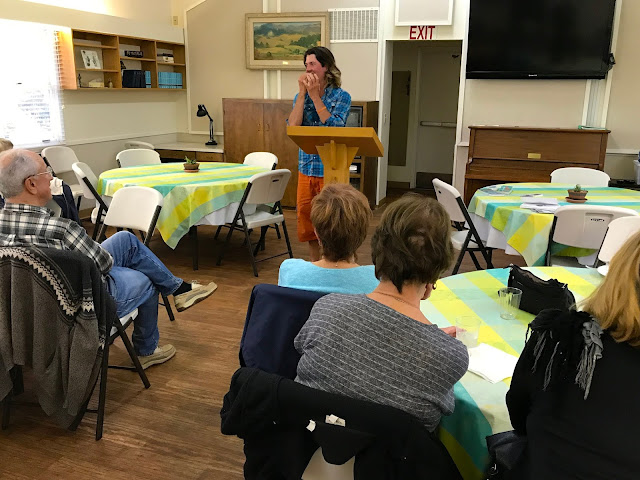 The evening he spoke to the Cambria Dinner Fellowship was the first time in a couple of years he had eaten with other people. He lives a somewhat ascetic life, devoted to nature and charity. In the last year he's adopted a diet of either a small pizza or pint of ice-cream for dinner. Energy bar or cereal at breakfast and sandwich at lunch. No alcohol, no drugs, no frills, just he and his beloved Chiweenies, in a small room. 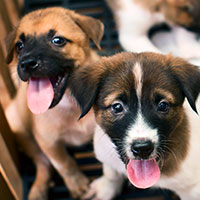 He is well known to animal lovers, domesticated or wild.
He's been involved in rescues, some harrowing, of deer, otters, elephant seals and birds that either fall off cliffs, get into deep surf, get injured, caught in netting or other travails.
Pictured above are the companions he adopted, one of whom is blind, both of whom ride with him on road trips.
He's in the habit of showing up at his outfitting post, and if no one is waiting for a rental or instruction, he takes to the sea to inspect the shore line, cove and surrounding bluffs to check on nature. He's the first to know when whales are in the cove feeding with their young. He knows when the sharks are around, or when the bait balls of anchovy roll in, or when the shearwaters are in transit and etc. And he loves it. He also has an abiding love for his mother who passed away. 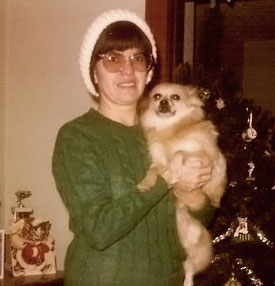 Every August 8th, his mother's birthday, Cubby donates whatever he earns to a charity, usually one involving animals.
That is why he has begun training to ride his bike on Thanksgiving up and down the road to Hearst Castle until he reaches, in aggregate, the altitude of Mount Everest, 29,029 feet. "Everesting Hearst."
As he's worked out the logistics he figures he will spend 15 hours riding. Thanksgiving, because Hearst Castle is closed to tourists and he'll have the winding 5 mile climb to himself. He's got his hydration and food timetable established and continues to work on GPS certification gear. He plans to start early so he will have only some 3 hours of climbing in the dark.
"The dark is when your mind starts working on you," he says.
The beneficiary is the Short n Sweet Rescue Alliance on Jack Creek Road in the Templeton California area. Cubby says they have dogs, rabbits, horses and even donkeys in their care. If you are interested in helping this dynamic young man you can link here to his page.
You don't run into many folks like Cubby. He's got a personality full of sunshine. He is the first I've met who measures his life by being able to reach a charitable giving level. Amazing! 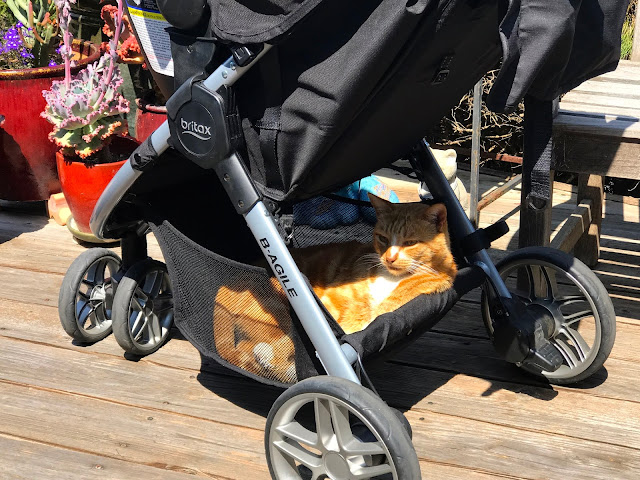 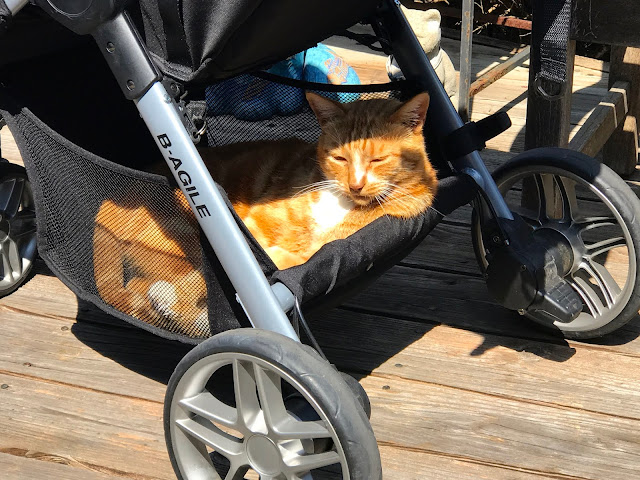 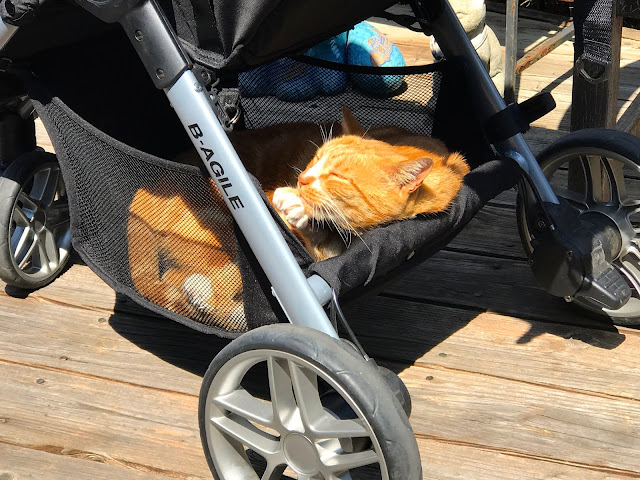 the end of summer feast 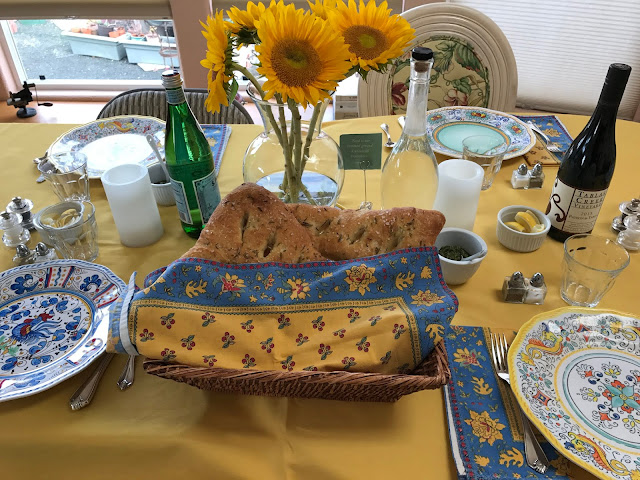 Our gourmet pal MM laid out what she calls the end of summer meal with some of her favorite recipes. Including her world class Fougasse. 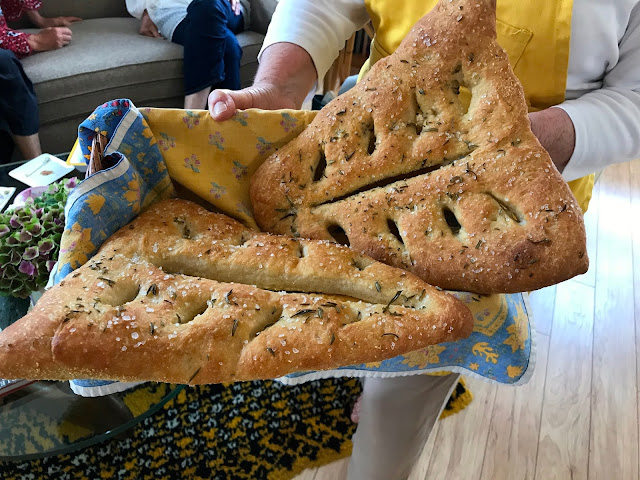 Great companion to the medly of perfectly roasted veggies, chicken breast and peach with pesto that is off the charts! 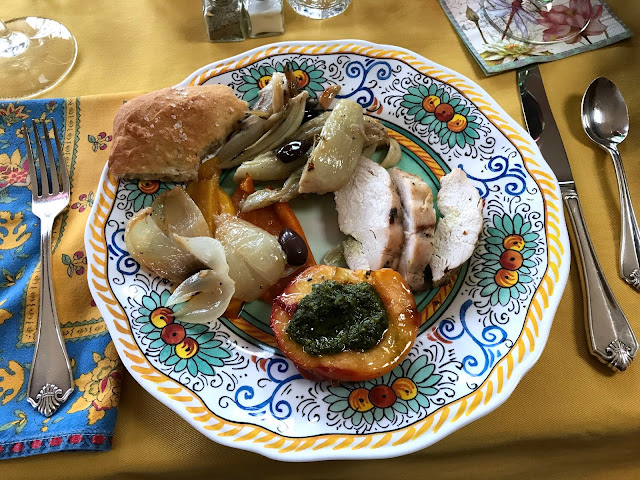 There was a course of cheese, and chocolate dipped figs that didn't make it to the camera, because Mr. Camera was too busy indulging.

See you down the trail.
Posted by Tom Cochrun at 11:16 AM