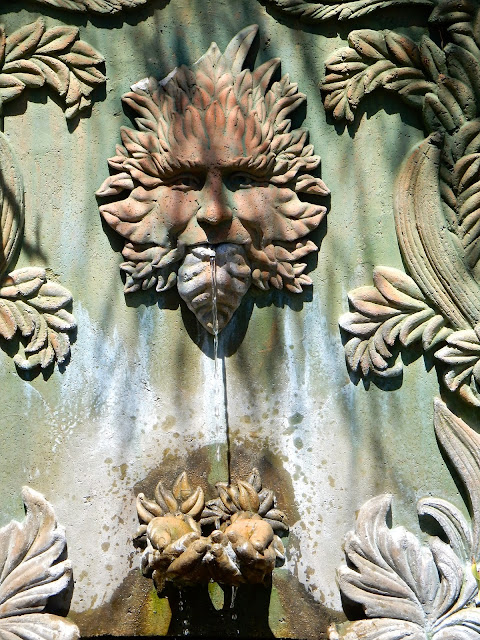 Green man has been around for a while. He's thought to be a representative of a vegetative god, but he's shown up in many cultures over the centuries. He's come to represent re-birth, spring and renewal. Everybody can use a little renewal or spring tonic.
A not so kind bug sidelined this writer for a few days but a benefit was attacking a stack of reading that had been building up. I'm referring to the kind of reading done in a comfortable chair. I read plenty each day, here on the screen but even the longer magazine pieces never seem to sink in like the reading done with magazine or book in hand.

rumbles
conservative?
One particularly long piece traced the mutation of the American conservative movement from Bill Buckley 's founding of the National Review in 1955 to the election of Donald Trump. Trump is the very kind charlatan Buckley devoted years to excising from the modern conservative movement. This president is the epitome of anti intellectualism. One wonders if Trump is really the new conservative.

religious?
As a backdrop to the executive order loosening restrictions on churches ability to partisan politic, there is the confounding support of Trump by white evangelical Christians, reported to be as high as 81%. Jim Wallis, author, theologian and president of Sojourners considers himself one of the 19% of white evangelicals who oppose trump. He wrote recently:
"To many outside the white evangelical world, it seemed- and still seems-inconceivable that a thrice-married serial adulterer, ultimate materialist, casino owner, habitual liar, and unprincipled deal-maker could ever become the standard bearer for a group that professes to base their vote on "family values."
Wallis attacks what he calls the racism of key evangelical
Christian leaders including Jerry Falwell. He accuses them of being political operatives who have been "played" by right wing Republicans.
It is that strain of self identified "Christian" who consider LGBTQ people unqualified for the ministry, who deny them communion or even consider them "sinful." Still, how that judgmental subset could endorse a sexual predator is beyond rationality. But it is that ilk that welcomes the ability to turn the Bible into a political weapon. Others argue that would be a dangerous and perverted use of the Judaic-Christian holy book, not unlike the fundamentalist terrorist's application of the Quran.
republican?
One also wonders if Trump is the new Republican. Another long tome explored the political shenanigans of Trump loyalty and emerging Republicanism.
Most serious analysts hold out little hope for the House passed health care reform of getting anywhere. Senate Republican have their own ideas and they are better grounded in reality. As several have said the Trump-Ryan plan means people will die because money and politics trumps healing and well being.
What survived the house politicking is essentially a tax break for the wealthiest while everyone else divides up the pain--higher premiums, lost coverage, being out of luck. Rex Huppke of the Chicago Tribune wrote the plan is, "a big middle finger to anyone who needs help." Take that Trump voters. You believed him but you got Trumped. Will traditional Republicans let that stand? Or will the Ryan opportunists or the liberty caucus fanatics define Republican?

academic fascism
With the first amendment and journalism under attack we also are watching the growing strain of fascism on college campuses. Intellectual freedom and freedom of speech are woven as a gospel of a free society. There is nothing that should be off limits in academia, but self righteous and narrow minded interests have attacked a researcher who proposed to study "transracialism."  It has all the hall marks of a totalitarian mentality. You can read about it here.

back to nap time
All of this and the current manic drama draws me to note again we are in a spasm when celebrity is more important than intelligence, when thoughtfulness is eclipsed by emotion, when superficiality counts for more than history. It's almost enough to make you want crawl back under the covers.
when size does not matter 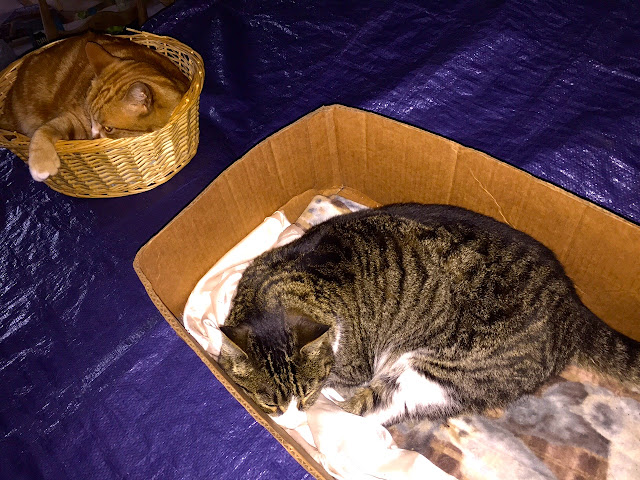 The perpetual mystery of the sleeping habits of Hemingway and Joy. Sometimes they share the box. On this night it doesn't matter that little Joy has room to spare, big Hemingway either chose or was banished to the little basket. Well, he curls well 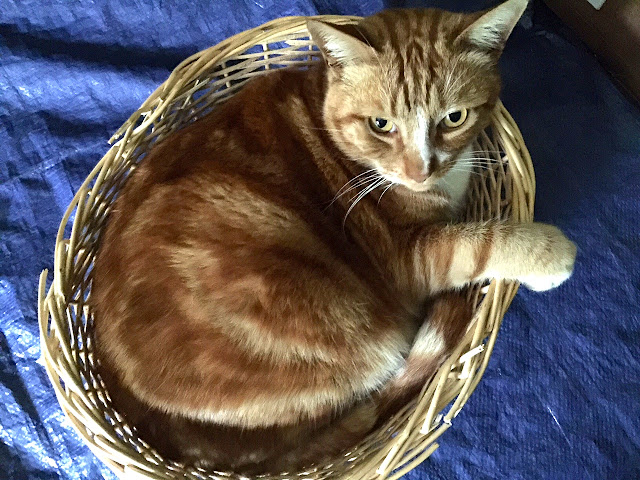 See you down the trail.
Posted by Tom Cochrun at 8:07 AM