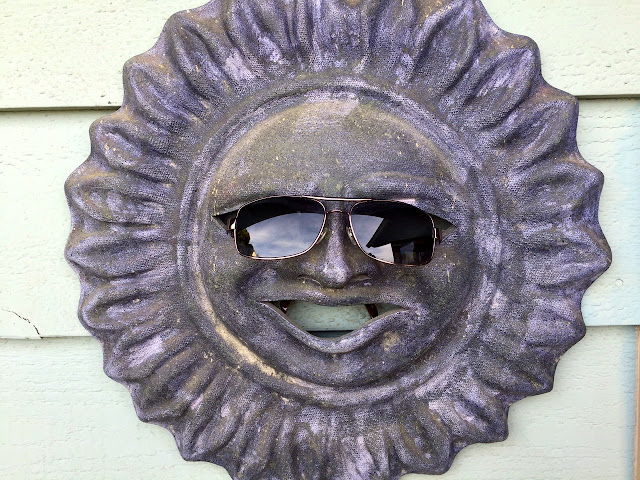 Sometimes it's all about how you see it.
about the labels
A preposterous misunderstanding is roiling through the American body politic, weaponizing words and good intentions.
The phrase is political correctness. If you are interested there is a study of the origins and how it has become a cudgel in cultural debate.
The short course is this; at its origin it was used in the 1940's in debates about "proper" political dogma in communist discussions about Stalin. The point was to divine the "correct" party line. Stalin slaughtered "incorrect" opponents in massive purges. The phrase was a marginal concept known only to those who  studied communism or socialism.
Scholars say the phrase gained some usage in the early 1970's when Tony Cade Bambara wrote in The Black Woman:An Anthology "...a man cannot be politically correct and a male chauvinist too..."
In the early '70's progressives and feminists began to use the idea of political correctness as a way to avoid offensive speech, phrases and ideas. It was a kind of code to raise sensitivities about things that once had been acceptable but were no longer. It was an age of combating segregation, sexism, and speaking of people as "retarded," "cripples," "spics" "beaners" "Wops" "Jewing down the price" "chicks" and you can supply your own list. Old traditions and ways of speaking, seen in modern light, were as offensive as "colored" drinking fountains, red lining in banking, sexual harassment of women in the work place, sitting in the back of the bus or discrimination of any sort. Offensive and illegal traditions and old ways were considered politically incorrect.
The phrase went from there to being almost a satire of itself. Sensitive and even insensitive people began to use it as a lighthearted lampoon about all manner of thing. It became a kind of sarcasm and joke, especially among those pushing for change. Still it was not widely used and certainly not part of the daily lexicon.
At the same time colleges and universities began to adjust curricula adding courses in feminism and the changing racial, ethnic and cultural diversity. Traditionalists, who did not like the way culture was changing, were unhappy. One of those was Allan Bloom who wrote The Closing of the American Mind in 1987. He railed against liberal philosophy and the changing of American education. In tying together the evolution of education and the change in the face of America he used the phrase political correctness as a pejorative. The phrase began to get more mileage, mostly from conservative or right wing ideologues who were opposed to the changing standards, culture and times.
In the early 90's the word became weaponized. It became a code word for liberal, or liberal politics, progressives, changes in curriculum, education, or those who pushed against sexism, racism, and discrimination. What had been a word used mostly among academics became a red meat word and a political hammer used by conservatives. It was as if they had a flame thrower to scorch all ideas they opposed. Right wing think tanks dumped a lot of ink and time in using the word as a discrediting tool. Liberal ideas could be destroyed if they were labeled as "political correctness."
It is only fair to mention there is also a conservative correctness. The most virulent form is book banning, or seeking to censor film, television, video games and other creative enterprise. As a small example, cafeterias in the US House of Representatives changed French Fries and French Toast to Freedom Fries and Freedom Toast when France opposed the US invasion of Iraq. Members of the Freedom Caucus in the House remain some of the most adamant attackers of ideas they oppose by means of condemnation using "politically correct." Trump has taken up the tool twisting it to "fake news" and "enemy of the people."
true words
By most accepted definitions CONSERVATIVES are those committed to traditional values and ways of doing things and are opposed to change. Conservatives favor free enterprise, private ownership and socially conservative ideas. Conservatives favor as little government as possible, especially at the federal level. Conservatives are somewhat averse to change. They believe government should protect private property. Conservatives believe there are too many regulations and too much government interference in business. They oppose government changing culture.

LIBERALS are open to new ideas, opinions and intellectual liberty. They favor progress and believe in the essential goodness of people. They favor protection of civil liberties and believe government is responsible for correcting social inequities in race, gender and class. Liberals believe government should protect individual liberty. They favor free trade. Liberals believe government regulations should protect individuals from the abuses of industry and corporations.
Now, I'm sure almost everyone, regardless of where you align, will find something you think I got wrong. I'm simplifying. And over the years the manifestations of liberal and conservative philosophy and politics have morphed.
free speech
As an absolutist on the first amendment I understand that right wingers can zing liberals and if they choose liberals can zing back. That is part of the rough and tumble of our system. But as a journalist, I'm a stickler for getting it right and using the right words.
Even Bill Maher, a liberal snarkster, got it wrong. Like right wing ideologues he points to recent campus disturbances where a speaker has been barred, cancelled or denied a right to speak because, he said, of "liberals" in academia pushing political correctness.  Bull shit, to use a word understood on both sides of the spectrum.
Liberals don't deny free speech, fascists do. Anyone who advocates denial of a right to free speech, no matter how offensive or politically weighted, is not a liberal or an intellectual conservative.
Someone at a university who may fancy themselves a progressive or a liberal and who would agitate against the appearance of a speaker, film, production or whatever just lost the right to call themselves a liberal. The function of their behavior is fascism or totalitarianism. They would deny an individual civil liberty. They can gripe and protest, but not deny-that disqualifies them.
A conservative who would seek to deny the right of someone to speak certainly betrays an adherence to traditional values. What can be a more traditional value than the bill of rights? Conservatives can gripe and protest as well, but not deny.
The bottom line is simple. Those who seek to deny full access to the rights of the first amendment should be called what they are, fascists. Sorry if this pulls the steam out of a favorite conservative charge. Sorry if this unnerves some professor who fancies herself or himself a "progressive" or liberal. It's time for the media to get it right and to be precise.
This is the age of information. Accuracy matters. And besides that, there should be nothing considered off limits in the realm of academia or the church. If you can't consider or study something, controversial, challenging to your ideas, or even an evil, in the halls of academy or a place of faith, then what's the point? What's the value? You might as well turn off the lights, go home and devolve into superstitious, uninformed, science rejecting, close minded barbarians burning those books or dissertations in bonfires. 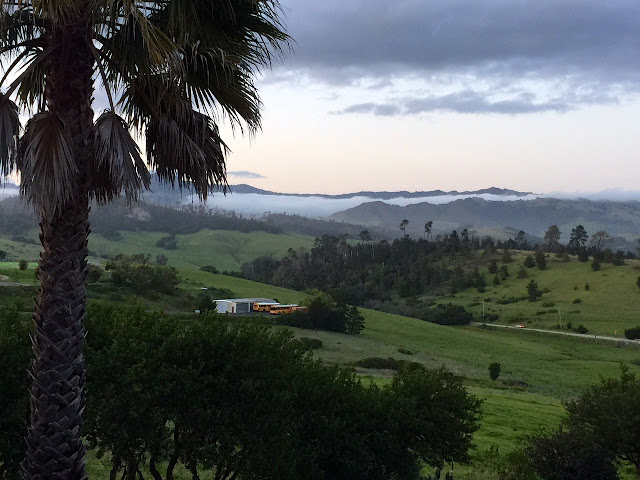 Pulling in an evening blanket...of fog. 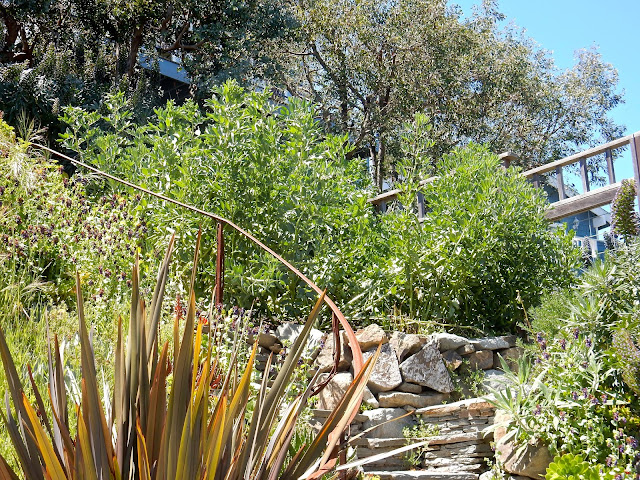 This years crop of fava beans. Frequent readers know of our fondness for this labor intensive crop. You can read Romancing the Fava here. With this fullness of growth it is for the first harvest. 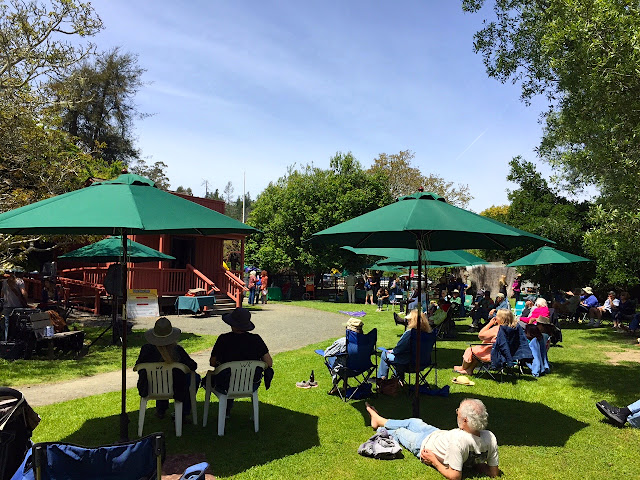 Green Space Cambria celebrating mother earth in a beautiful green space.
O really?pt 2
Bully mouth Bill O'Reilly may show up someplace else, but his banishment from Fox News was good to see. You have to wonder though when Fox News founder Roger Ailes and his superstar are dumped because of sexual harassment, how much can you trust what comes out of that sort of culture, especially on matters of women's rights, health, income equality and even sexual harassment in the work place? Fair and balanced?
Then consider right wing radio and web screamer Alex Jones who has launched some of the most absurd theories and "facts" who now says it's only performance art. You wonder if those on the right who feed on Fox, O'Reilly, Jones and Limbaugh are feeling less secure in their "rightness" since their pantheon are dirty old men with feet of clay?
And we include in that audience the predator in chief. Dirty Donny feeds on Fox and was a frequent guest on Alex Jones. That's no fake news. Just a fake president.

See you down the trail.
Posted by Tom Cochrun at 8:25 AM