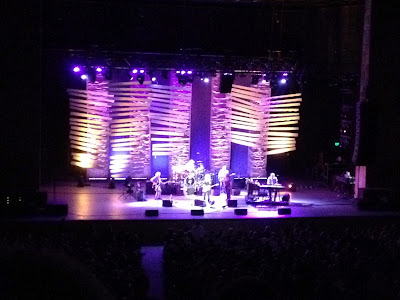 Truth is Bonnie Raitt probably would have liked to have had the night off.
The previous evening was a "homecoming" show in LA including a reception she said for 180, all of whom she visited with.
"We played until 3 or 4 in the morning!" she told the enthusiastic Santa Barbara Bowl audience.  It was the audience that seemed to recharge her as the evening progressed.
She paid great tribute to the late Gerry Rafferty saying the Scotsman "was a greatly under appreciated artist" who deserves more recognition.
Rafferty's "Right Down the Line" is the single from her new album and was warmly accepted by the audience and set the evening on its trajectory.

It started off on a high point and simply got better. The superb band James "Hutch" Hutchinson on Bass, Ricky Fataar on Drums, George Marinelli on Guitar and Mike Finnigan on keyboard also were cranked up by the continuing ovations and response.
Raitt brought guitar handler Manny Alvarez out to play on a couple of numbers.  A major talent there as well.  Vickie Randolph joined Bonnie in doing a couple of duets which also cranked up the crowd.
Throughout the concert she paid effusive tribute to Mavis Staples who had been her opening act for much of the tour.
One of several emotional high points came when she sang "Marriage Made In Hollywood" written by Paul Brady and her former Husband Michael O'Keefe.
"...like a free-fall chute that didn't open
He looked down to see his dream was broken
He stared back up at a hot grey sky
Re-ran his life and then he died.
Well if you jump off a building, brother beware!
"Cause my friend Jimmy woke up in mid-air
No time to smile, no time to wave
They buried him in a media grave."
Loudon Wainright's lyrics also gave Ms. Raitt a
powerful moment-
"...Mercy is just a warning across the bows
I live for yours and you can't fail me now..."

She is a great solo vocalist with a range from country to blues. And she is a consummate player.  Her guitar solo on
Ray Charles' "I Got News For You," had people standing and applauding before she finished.
Audiences at the Santa Barbara Bowl are attentive. Many in the region are music people or are associated with entertainment.  Some of the audience are peers. There is a mood of appreciation that just runs high in crowds at the Bowl.  Whatever the cause, it makes for a great instant love between performer and audience.
"I love you too," she yelled back to a fan. "It seems to be working out."
We left thrilled by the concert and I'll bet Bonnie Raitt left more pumped than she might have imagined she would be when she opened on the night after her homecoming show LA.
Another great nite under California stars.
See you down the trail.
Posted by Tom Cochrun at 2:34 PM