The Season of Mirth 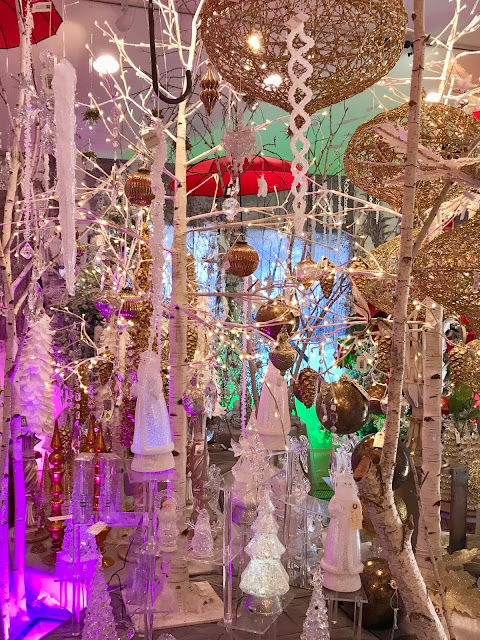 We have a tale of danger, played out on this plain... 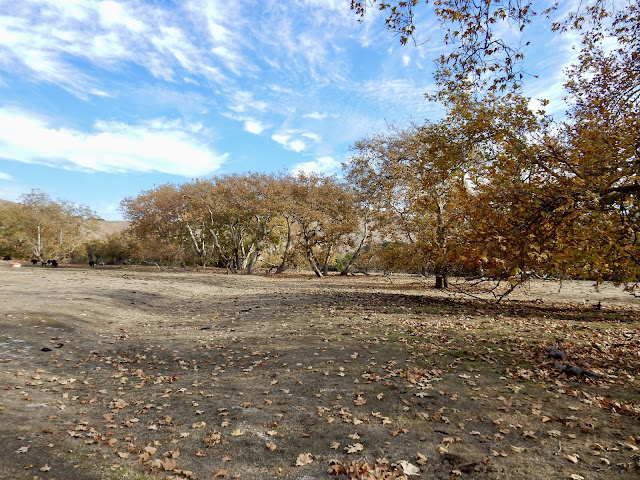 ...and we ride the way back machine to meet our favorite of the bearded old boys.
eye to eye with the old elf 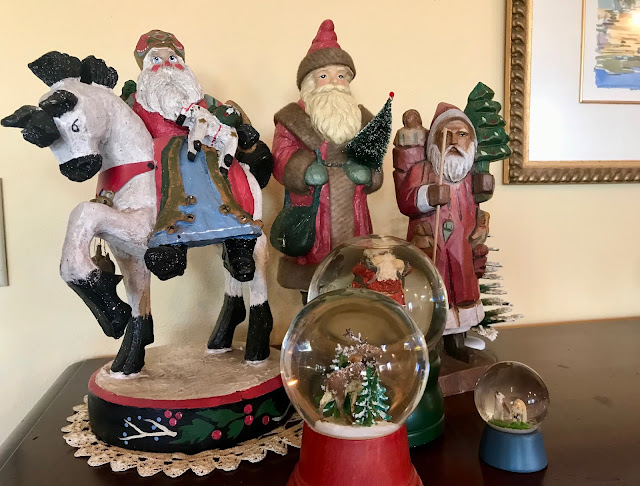 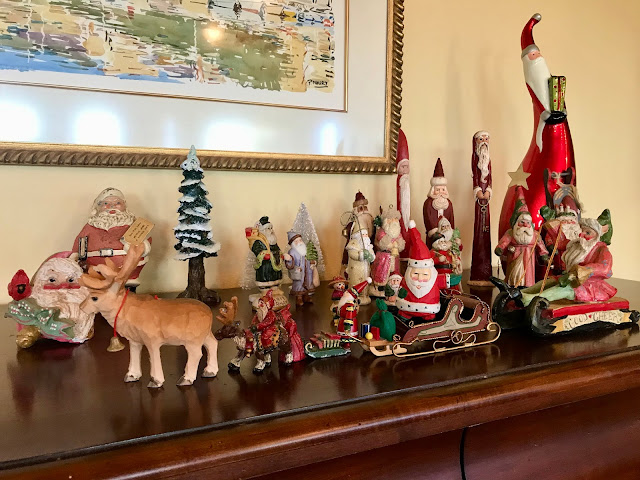 There he is, standing back on the left in the collection of St. Nicholas' who have taken a home in our house over the years.

A new fellow would arrive each year, when the girls were young. But one old boy, worn, weary, battle scarred and from the old school, has a favorite spot in our heart. 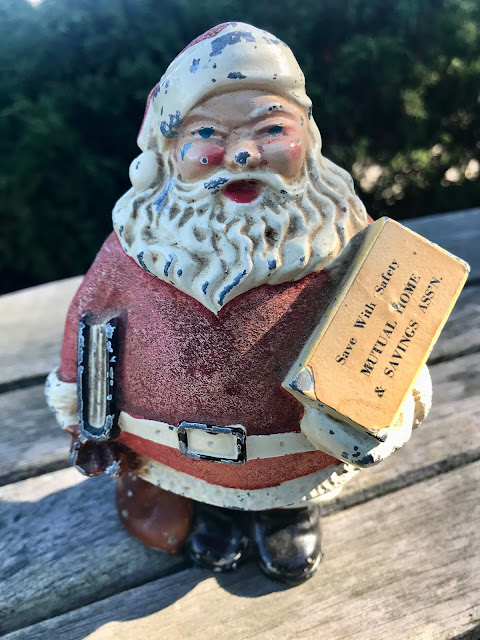 This Santa showed up in the early 1950's. We lived in a two bed room VA financed tract house on Muncie's South Ebright Street where other WWII vets settled.
Brother John and I shared a room. We also shared this bank, an inducement from Mutual Home and Savings Association to participate in a Christmas Club.
Times were simpler, and being what they were, the bank was declared a Christmas decoration. That was a unilateral act of parental diplomacy, a way to effect a permanent truce about control of the bank. John and I wrestled and rumbled about most things and the Santa bank was, in our minds, an heirloom.
We played with the metal jolly fellow each year, until our interests turned to cowboy guns and holsters and then basketballs and boxing gloves. By the time we were interested in transistor radios and records, Santa had assumed true heirloom status and made his yearly appearances, second in importance to the angel that reigned over the family Christmas decorations from atop the tree.
When I came home from college, it warmed me to see the increasingly worn chubby old elf. One year while dad and I watched the Tonight Show, I remember looking it over closely and wondering how John and I had inflicted all the knicks and dings.
One season, Santa was missing. I learned John had borrowed it since he had a new daughter. Before John died, as a young man many years ago, Santa came back home. Even in the year of John and our younger brother Jim's passing, the old Santa was put on display. After Dad died, the little bank was a kind of talisman, and a holder of memories.
Yes Virginia there are a lot of Santa's in this world and it rounds out a life to pick your own favorite, even if they are part of a display in a twinkle shop. We'll take a closer look in a bit. 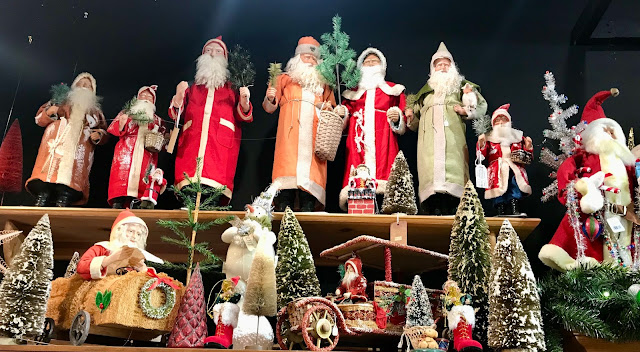 Now, a story of the maternal blessing of motherly protection. We find ourselves among the Sycamores and Oaks of the California central coast.
If you look closely there is gold in those leaves on the ground. 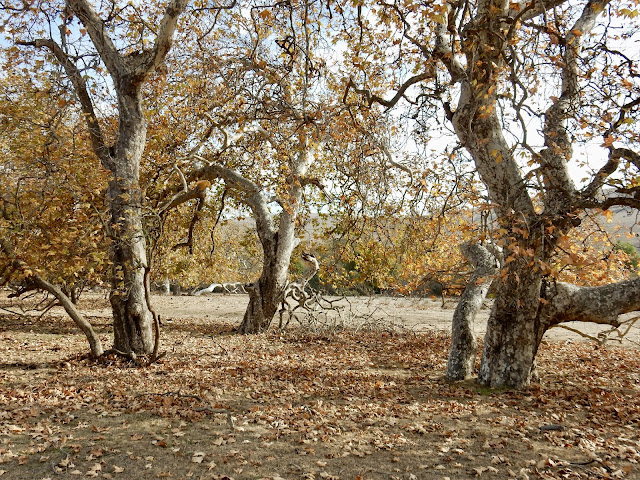 It is a kind of "gold," I clarify, the sort of gold that Lana, dedicated gardener and composter, taught me to collect many years ago.
This season she conveys "the thrill of the hunt" to our grand daughter. The objects they seek are cow pies. Yep, nitrogen to enrich the soil.
They carefully watch their step. 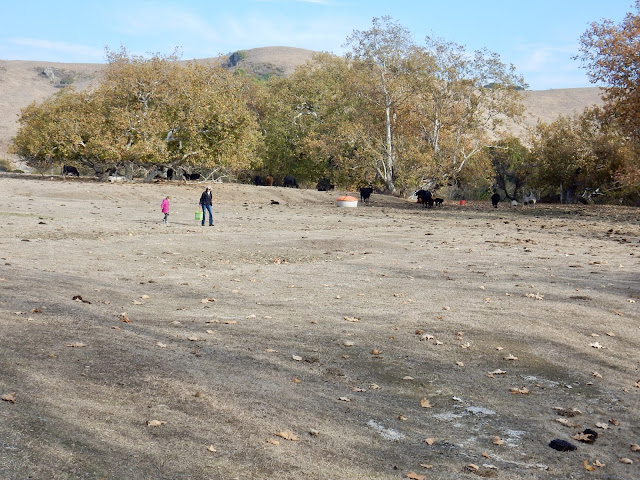 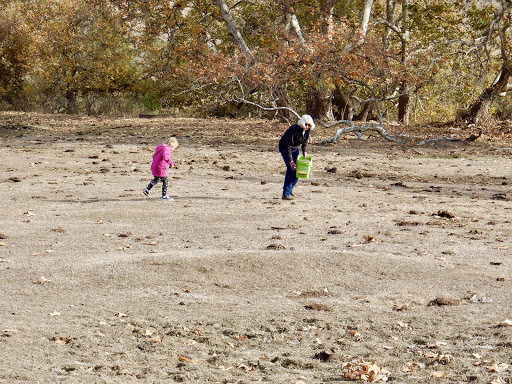 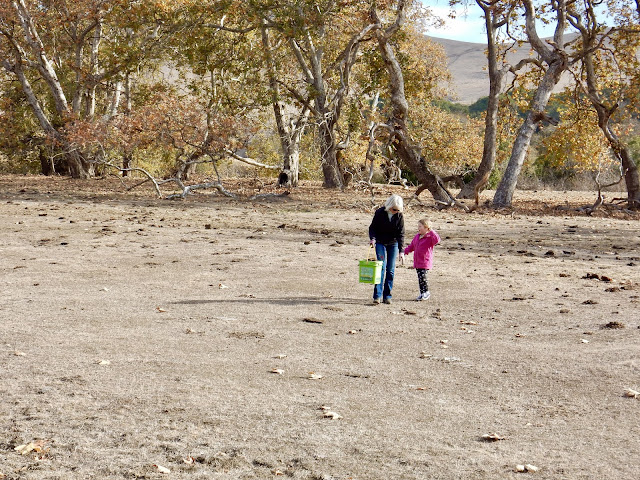 Ah, and here, entering stage right, comes the danger. Another mother, grand in her own way, protectng her progeny. 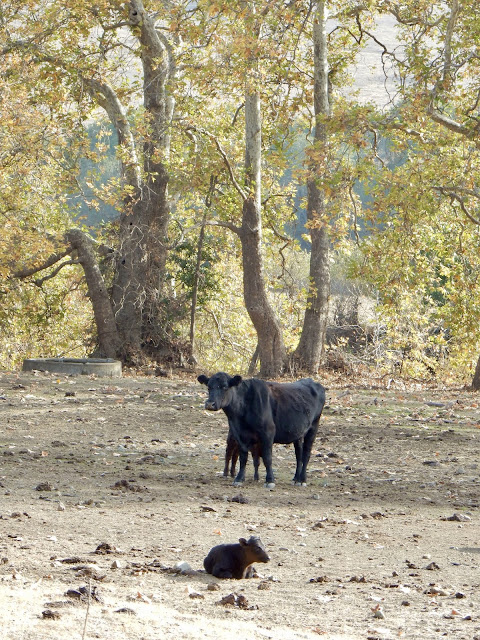 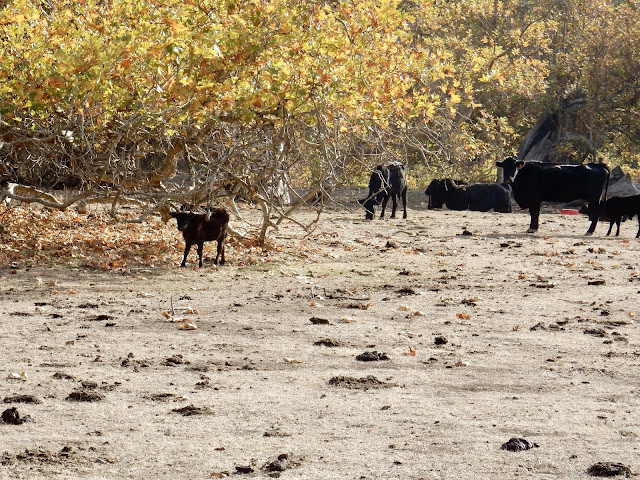 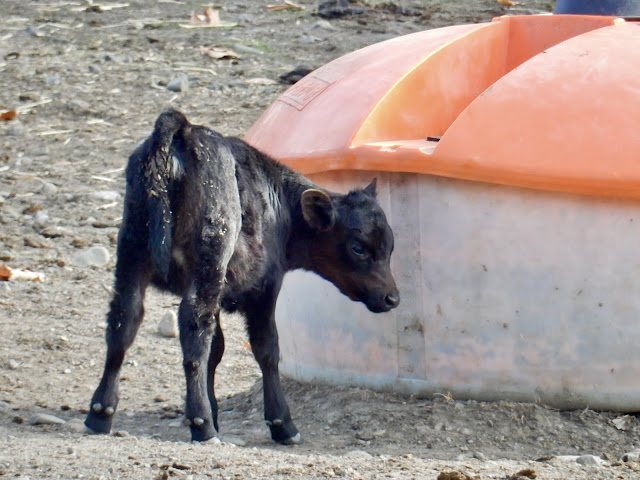 In fact there was a lot of maternal interest on this field on this day. 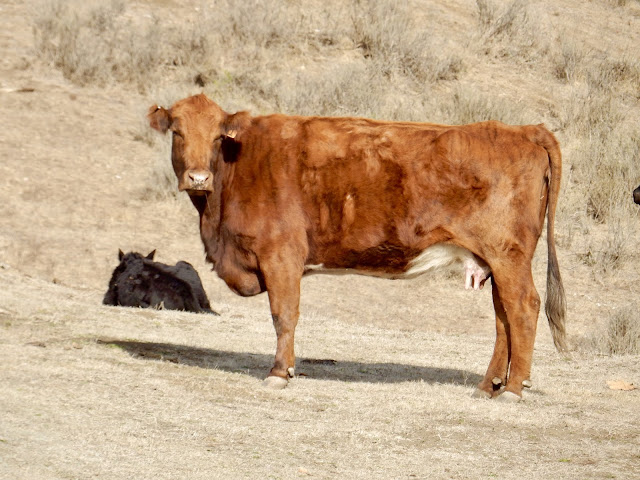 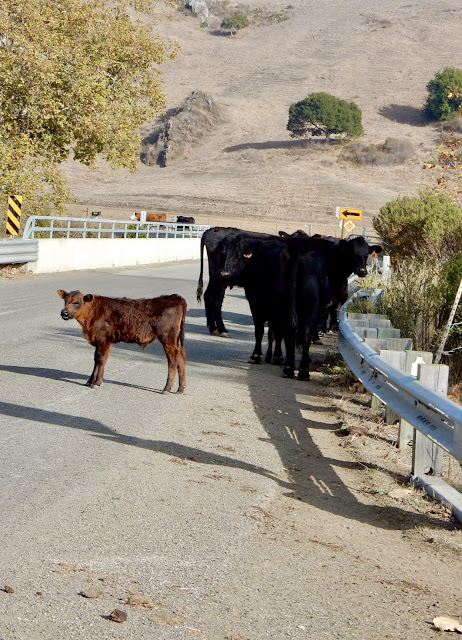 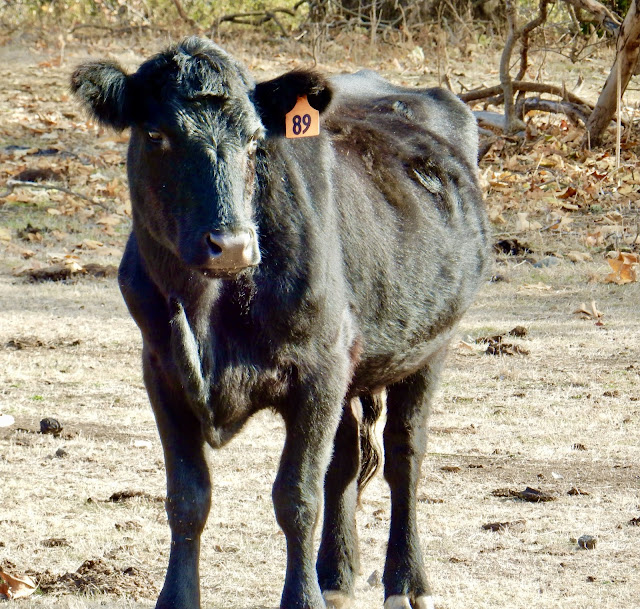 With a sufficient number of collections in the bucket, we were returning to the car when a rancher pulled her pick up along side.
"Watch out for those mothers," she said. "They're more dangerous than the bulls. They're very protective. There are lot of young out there and they are very protective. Worse than the bulls, they'll just bowl you over."
"Thanks, we'll be careful. We're leaving now," I sheepishly replied to this keeper of the beef heard.
"They'll bowl you over, run you right into a tree," she said before pointing her horsepower toward the west.
As she drove away, I noticed most of the mothers watched her truck disappear around the bend.
eye to eye with Santa 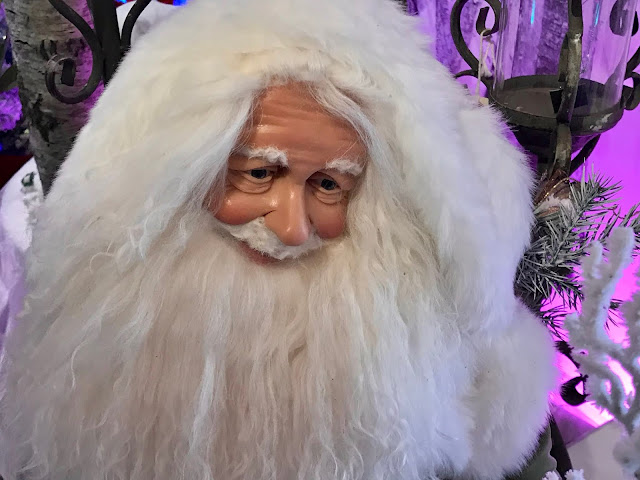 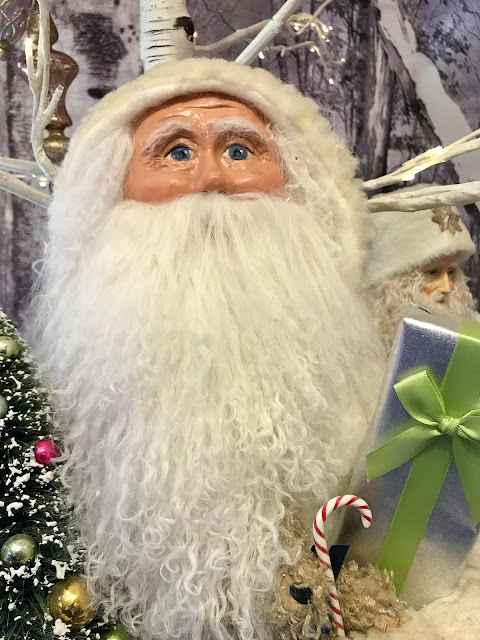 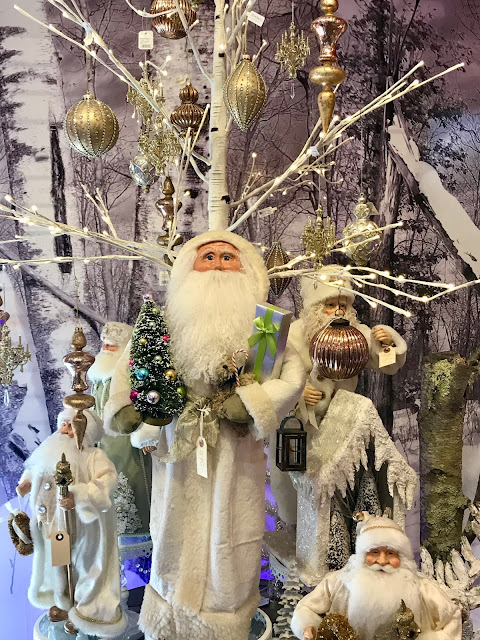 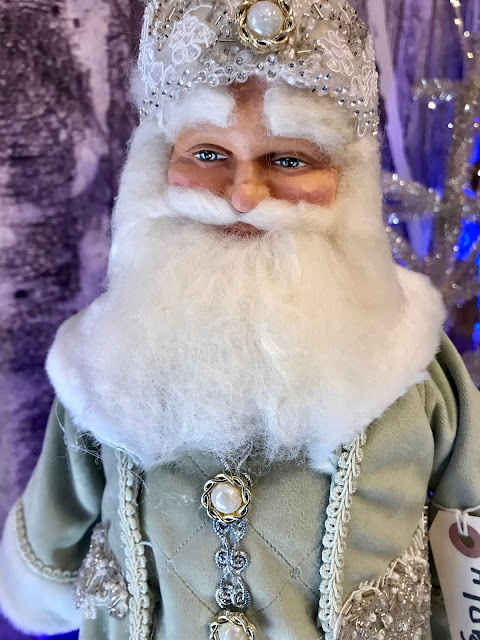 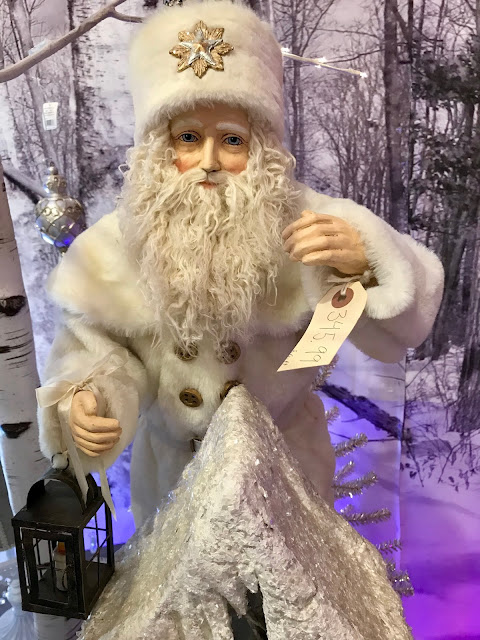 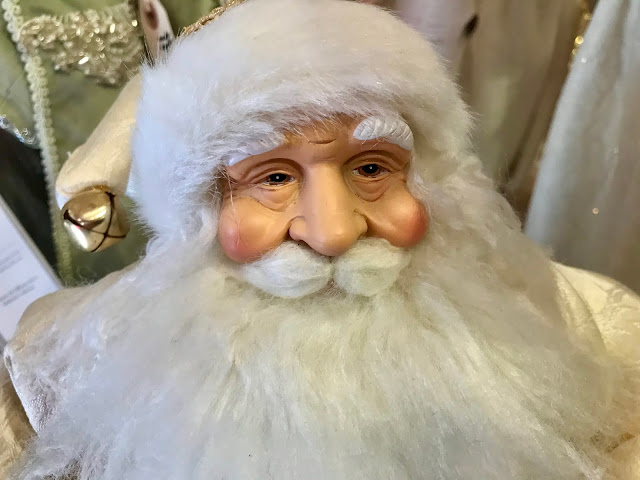 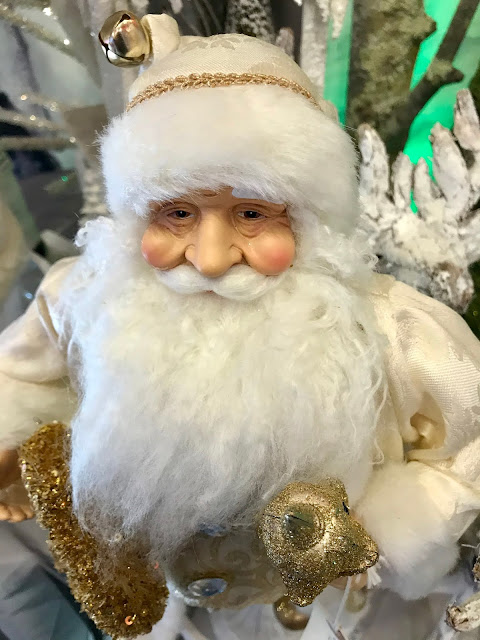 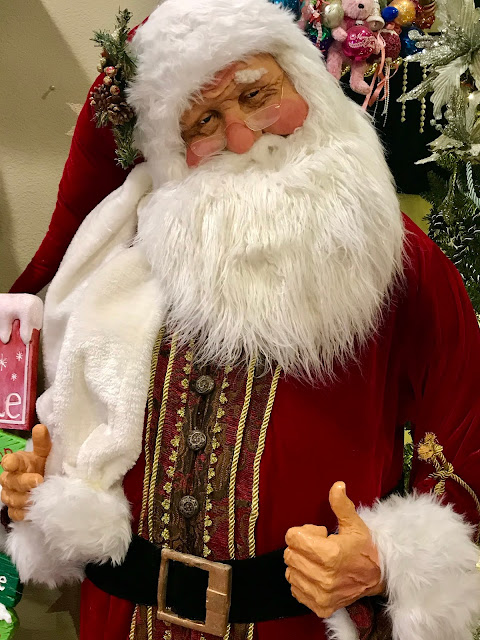 Santa, dude, we all are glad to see you and the gang this year. That is especially so for the knicked little Saint Nick who showed up almost 70 years ago. 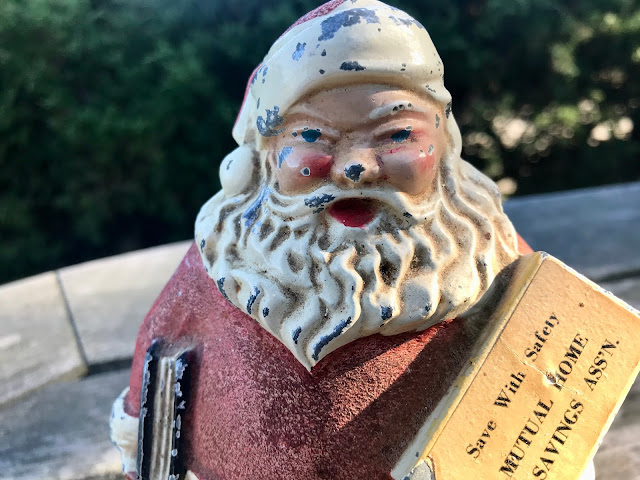 After mom passed he started making memories for daughters Kristin and Katherine and now for the grands Addie and Henry. He is still all about giving, and love!
Whatever is your tradition, LightBreezes wishes you Merry, Happy, Good Tidings, Great Joy and Peace.
Thanks for spending some of this challenging year here and for giving time to the thoughts we leave at this spot.
Wishing you all health and happiness in the new year!
See you down the trail!