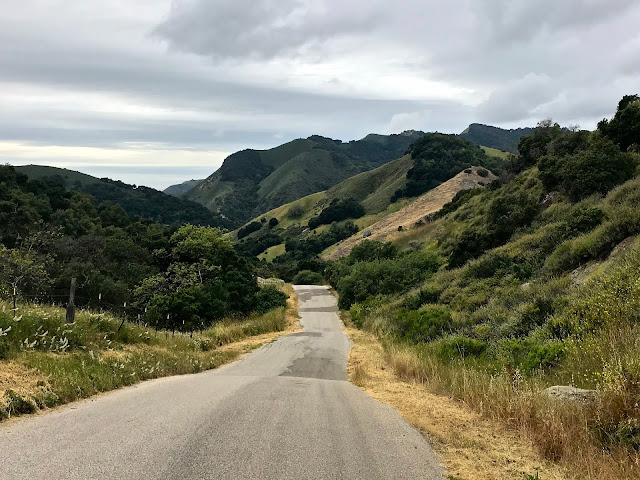 the preamble
People lived in this area that is now half way between San Francisco and Los Angeles in pre-historic habitation. The native Chumash traveled the mountains, settling in seasonal camps in the highlands or near the Pacific shore. They ranged these mountains to hunt and gather and fed on shell fish and fish when camped by the sea.
There is evidence some 30 thousand lived here a thousand years before the Spanish arrived. That happened when the Portola expedition camped near what is now Cambria in 1769.
In the 700's the natives created paths, their version of roads, including a trail that ran along side the stream. Today we call it Santa Rosa Creek and the trail is Santa Rosa Creek Road. 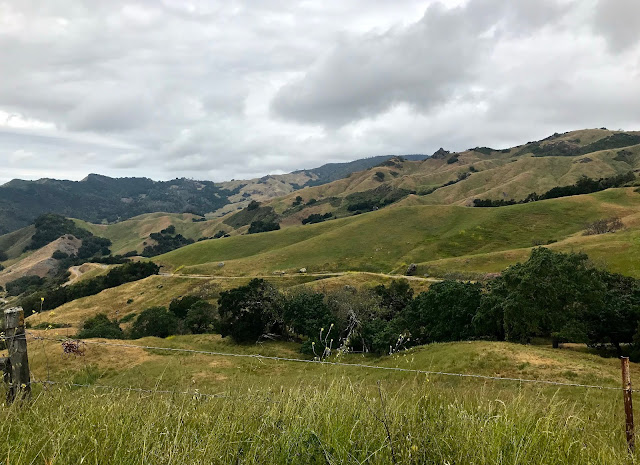 The settlers began to come in the mid 1800's and it picked  up in 1860 when Cinnabar, the ore of mercury or quicksilver, was discovered and then mined.

Today's road, in the frame above that mid screen line that winds down on the left, was part of the creekside trail that ran to the Oceanic mine that opened in 1865. Later when the first of several waves of cattle growers came to the area, the Santa Rosa Creek trail was the route for cattle drives. 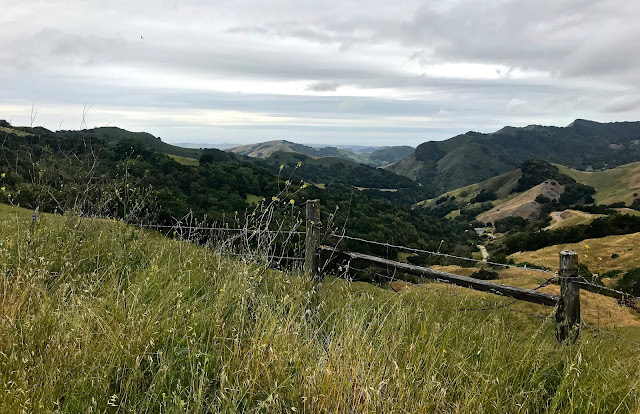 Santa Rosa Creek Road is a favorite for riders, motorcyclists, more adventurous tourists or Sunday drivers who want to see the beauty of the Santa Lucia Mountains. It's a 15 mile winding, climbing, series of cutbacks and turns and magnificent views. The road can be seen winding in the right mid frame above. 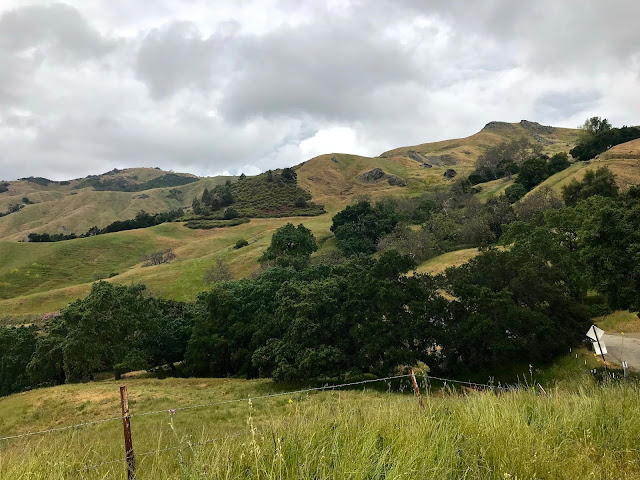 the delight
Lana and I were enroute home from Los Osos the other day when to our surprise, and that of a hundred other motorists, Highway 1 was closed at Highway 46, the Green Valley Road. Closed because the Tour of California bike race was speeding south from Big Sur. Someone had goofed because there was no advance warning the road would be closed. Certain exits had been marked days in advance and we planned accordingly.
So we found ourselves in what amounted to a parking lot on Highway 46 and Highway 1. The inspiration flashed...
We had not driven Santa Rosa Creek for a while. We used to hike there regularly and always took visitors, some of whom turned a bit green or white knuckled, for a drive.
On this day, what a delight! 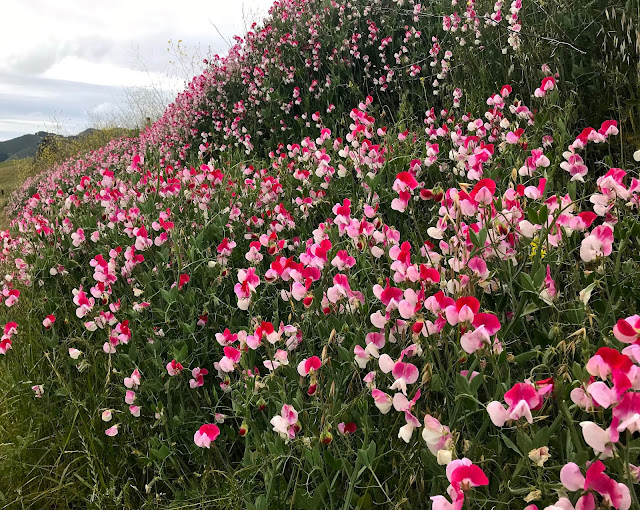 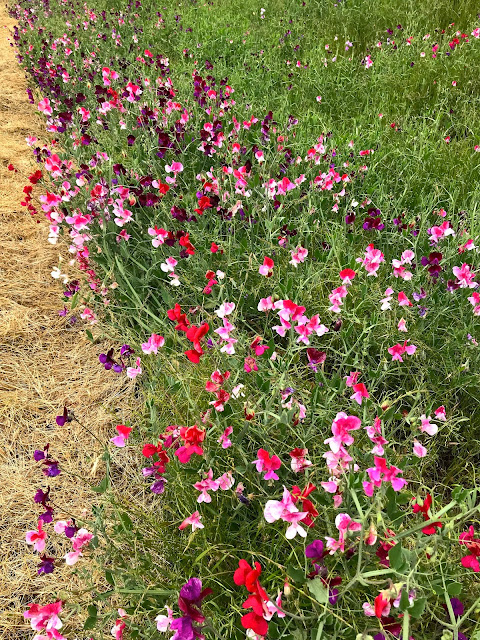 The road was resplendent with Sweet Peas and Lupine. 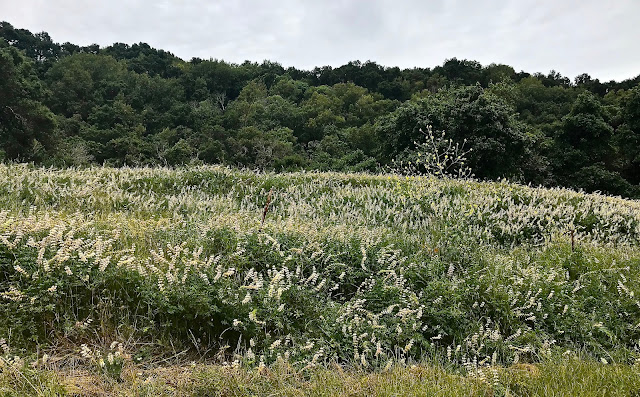 And the sky over the Santa Lucia danced with clouds gathering a rare May rain storm. 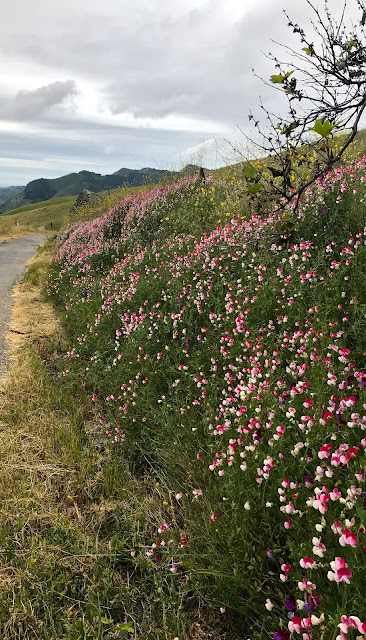 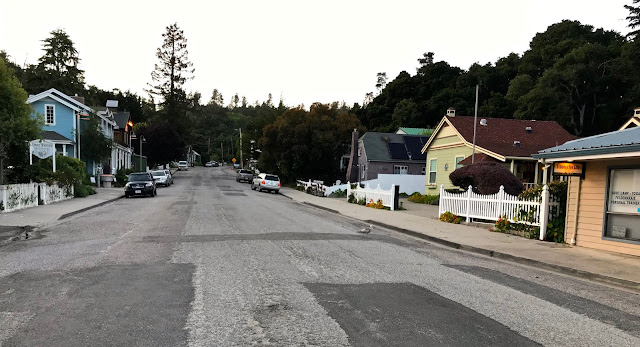 One more road story here.
This is the scene that greeted us after dinner in the village the other night. A quiet street and there at about 3:00 is a street walker, out of place to be sure.

Dawdling, he or she seems to be. First one way and now the other and seemingly unaware a motorist has entered the scene. 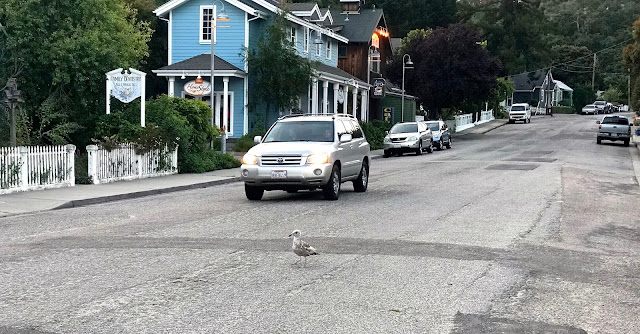 Oblivious is this gull. Are we about to witness his or her journey to oblivion? 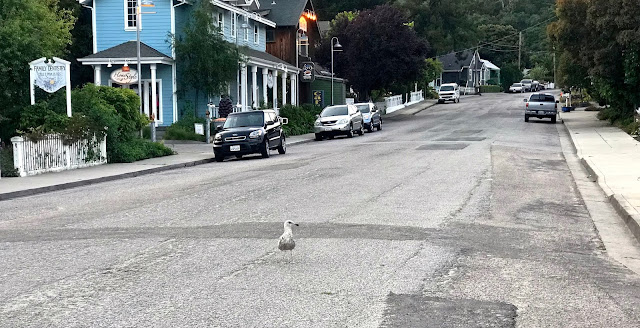 No dispatch today. And the quiet settles in, the sun sinks more deeply toward the sea, and the street walker dawdles on.

Certainly these stories left you with less anxiety than the news. But of that, it can be sure we are on the road to an historic battle of legislative rights and Presidential prerogative.
Cast another way, a battle between constitutional process and contaminated power. Cast yet another way a battle between right and wrong.