Reminded me of a Sci-fi thriller. Transformer vs Fish Cloud. 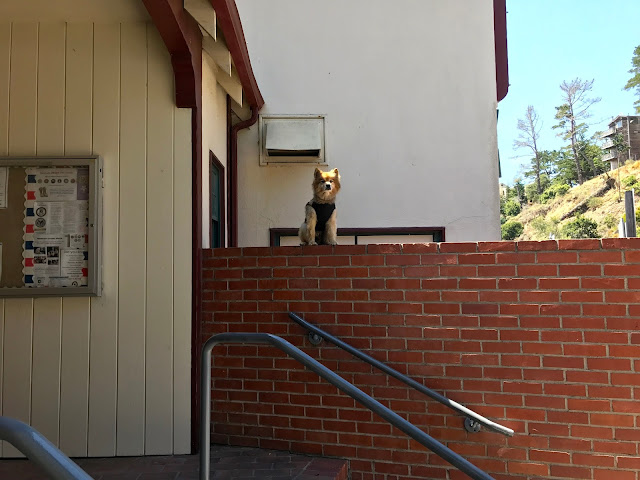 At first glance we thought it was a stuffed animal put atop the ledge at the Vets Hall on Farmer's market Friday. 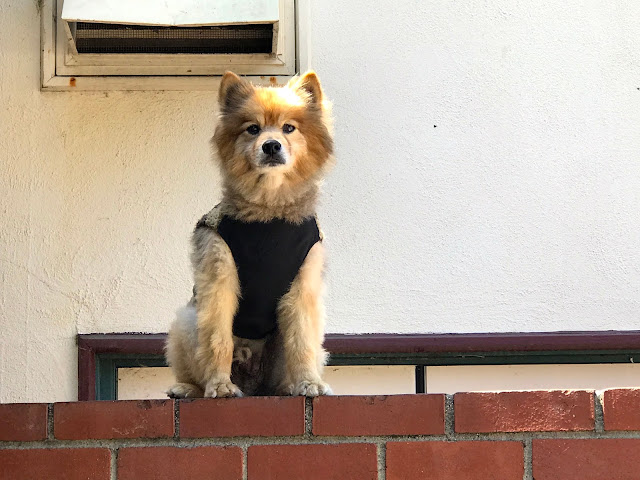 No, he was the real deal and seems to wish I'd get out of the way so he can keep an eye on his companion, busy at the market.

screwing our veterans
More than 700 veterans, family members and former employees of a Halliburton subsidiary were kicked in the teeth by a federal judge who dismissed a major lawsuit against the defense contractor over burn pit operations in Iraq and Afghanistan.
The Vets alleged the burn pits caused them chronic and deadly respiratory diseases and cancer.
Patricia Kime of McClatchy news reports US District Court Judge Roger Titus wrote that the company, KBR, could not be held liable for a military decision. The judge said he didn't have jurisdiction to hold the Pentagon responsible.
The suit had tied together cases across the US and included 63 specific complaints and 44 national class action suits.
KBR operated the burn pits running them near where troops lived and worked. Allegedly KBR burned stuff that should not have been put in the pits; paint, batteries, computers, fuel, plastic, medical waste.
Plaintiffs report a range of diseases resulting from exposure, including life threatening conditions, gastrointestinal disorders, neurological issues, cancer and constrictive bronchiolitis.
The judge said KBR was just following orders and that it was a military matter.  Victims and family members are furious.
It is pretty much par for the course. We put men and women in harms way, sometimes even greater jeopardy because of poor command decisions, and then we leave vets holding the bag. Combine that with the Inspector General's finding of wholesale fraud and waste in both wars-in the Billions, and you are left with corporations that made huge war profits, bonuses for executives and our loyal troops sick and dying and no one is held responsible.
It is important to recall that many of these war contracts were no bid deals, engineered by Dick Cheney for his Halliburton and KBR pals.
It's a damned shame we don't better respect, honor and treat those who serve. It is a continuing stain in our history, but so too is war profiteering. Has been ever such. Another of many reasons war is indeed, hell.
Maybe the Republican majority in Congress and the Republican president will come to the aid of the distressed vets of Iraq and Afghanistan. What's to stop them?