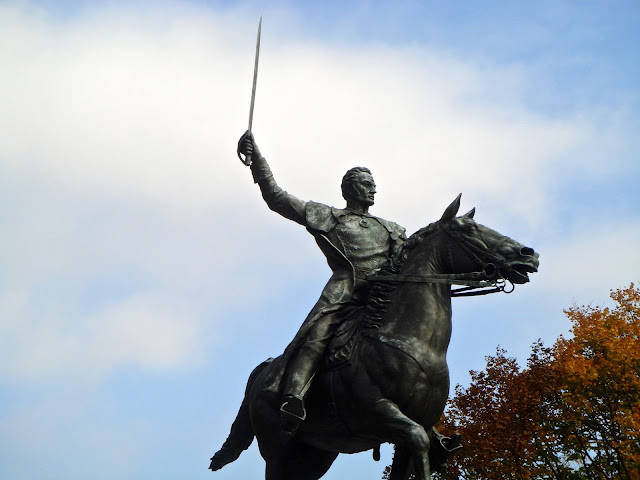 A conversation about monuments, history and racial sensitivity is important. So, lets start with this guy. There are probably more statues and monuments to Simon Bolivar, a Venezuelan, than anyone else in history. Yea, really!
Bolivar rides or stands tall in Washington, New York, San Francisco, Ottawa, Berlin, London, Cairo, Tehran, plus every major city in central and south America.
Bolivar was a kind of aristocratic Che Guevara. He liberated 5 nations, none of them the United States. He freed Venezuela, Bolivia, Colombia, Ecuador, Peru and Panama by organizing guerrilla campaigns and leading armies. Impressive stuff.
Now we get closer to home. Bolivar died in 1830. The US Congress approved the statue in 1945 and it was installed in 1959. That is a large historical disconnect, compared to the Robert E. Lee statues and those of other confederate leaders that stand in many places in the American south. 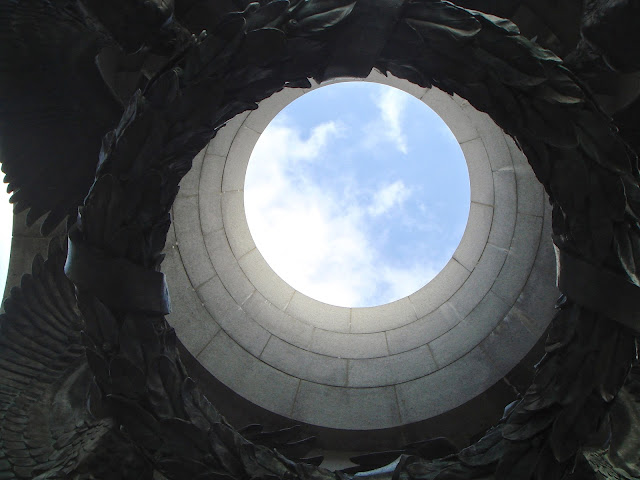 Those confederate memorials are offensive to millions of Americans and with just cause. They are however a part of history and even historic in their own right. While we may scratch our head and wonder why old Simon shows up all over the world, we probably would be opposed to suddenly tossing him over everywhere. While revisionist history of any sort is wrong, so too is a lack of perspective.
So here's the monumental idea. Put those confederate military leaders in context. It is important that all generations know  the "honored" were part of a horrible and deplorable war effort.
The future needs to know they stood for the enslavement of human beings, dissolution of the Union, a white supremacist view and that they lost. That kind of information should be added to the statues, prominently. But we can also add context.
For every confederate war leader there will be a larger statue or monument to others, such as African American leaders like Fredrick Douglass (who donald trump hears is "doing a good job") Sojourner Truth or Harriet Tubman, Clara Barton, Union Generals US. Grant, William Tecumseh Sherman, George Gordon Meade, George Henry Thomas, Phillip Sheridan and leaders, etc. As painful as it might be, there should also be monumental representation of the slave trade markets and conditions on plantations.
It is a matter of perspective. When you start knocking down statues the Taliban or ISIS comes to mind. Keep the old statues in place, but add interpretation and then put them in context with new statues and monuments so the full story and truth is told. 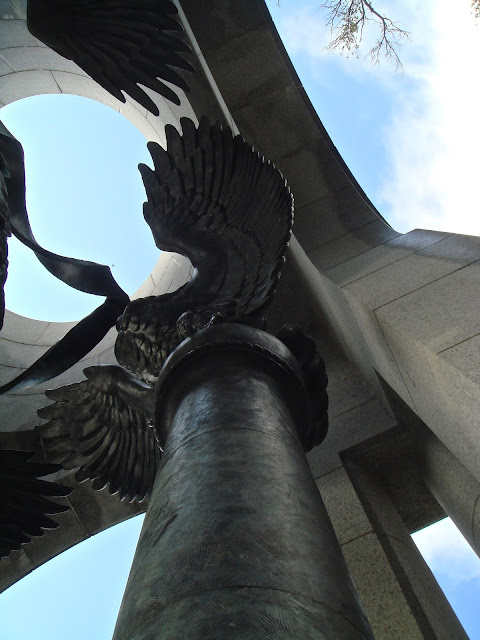 This "battle of monuments" would put a lot of artists to work, would spur a learning of history, would add relevance to old statues, create vivid interpretation of lessons best not lost in history and put the confederacy in a proper context.  It would also offer increased tourism to those communities who work to set the record straight by virtue of monumental truth.
guarding truth 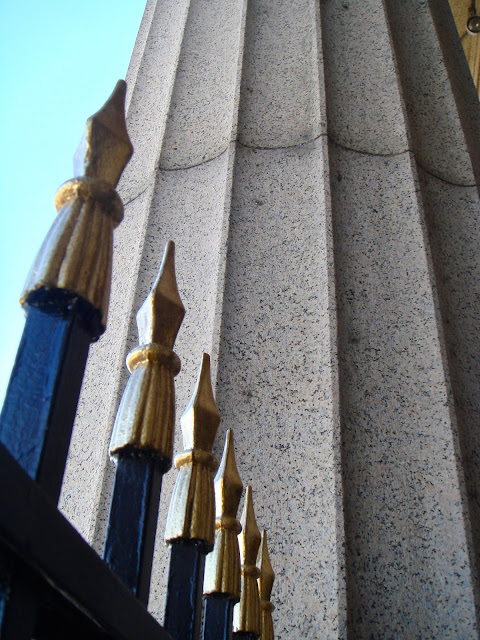 Truth and trust are bound in life. You can't have one without the other. That leads us to a consideration as to how to free ourselves of the man who is a cancer in our history.
The premise is simple. We must, the world must, everyone must be able to trust the President. Recent history shows us painfully we cannot trust president trump. It's a prescription for disaster when allies, enemies, constituents, military chiefs, national security forces, when no one can trust the president.
There is no need to wait for the Mueller investigation into the Russian connection; was there collusion or not, was trump enterprises involved in Russian money laundering, has his family enterprise violated conflicts of interest laws or the emoluments clause, is he compromised by loans from Russian banks, did he obstruct justice?  It is important to get these answers, but there is a path to removal in advance of that and it deals with trust.
In this case the inability to trust trump qualifies as making him unit to serve and that leads us to section 4 of the 25th Amendment. 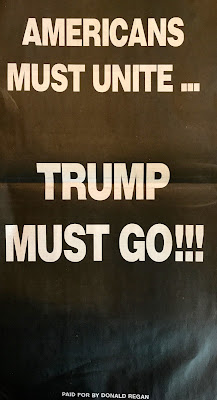 This newspaper ad greeted readers this morning. Doyle McManus's recent report in the LA Times underscores how official Washington is dealing with trumps lack of fitness.
McManus details how Secretary of State Tillerson, Defense Secretary Mattis and Joint Chiefs Chairman Joseph Dunford have worked overtime to back the US and North Korea from the brink of war. The situation was made grave by trump's tweets, lippy retorts, ignoring of staff and the behavior of a spoiled little rich boy brat. Pause on that for a moment--had Tillerson, Mattis and Dunford not joined forces we could be in the midst of war because a liar with no character and no sense of history or diplomacy.
He is unfit because he cannot be trusted. No psychologist or prosecutorial data is necessary. trump's own utterances make the case.
The question remains will congressional Republican leadership and members of the cabinet show character and begin the process to toss the lunatic out of office and thereby move to protect the US.
caesar's secret
Referring here to the salad. 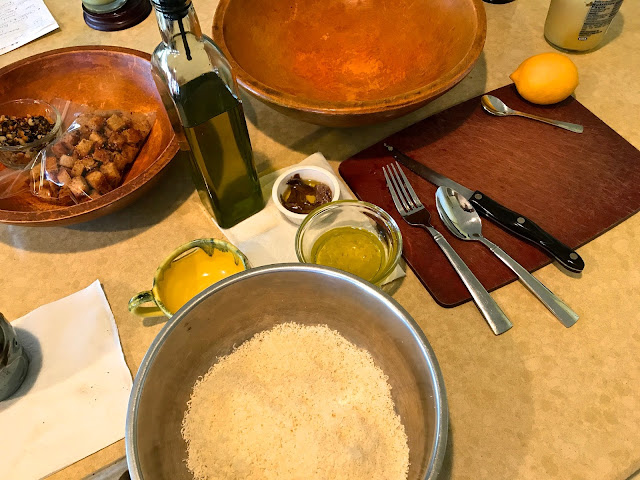 Over the years I've gained a reputation-deserved or not-as being good at making caesar salad. Above is recent set up of most of the ingredients. But there is something that needs closer examination. 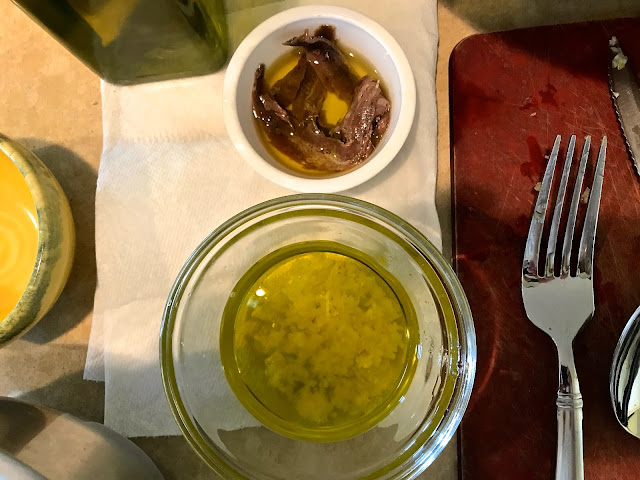 This is a technique I learned from legendary chef Dieter Puska.  You hand mash the anchovies and the minced garlic by fork in the salad bowl.  Over the years I've learned that mincing the cloves earlier and letting them soak in olive oil makes them more pliable and enriches the oil, which gets worked into the dressing. I have also started reserving the oil of the anchovies as well.  Everything starts with these two foundations.

See you down the trail.
Posted by Tom Cochrun at 12:54 PM