ON THE VONNEGUT TRAIL- 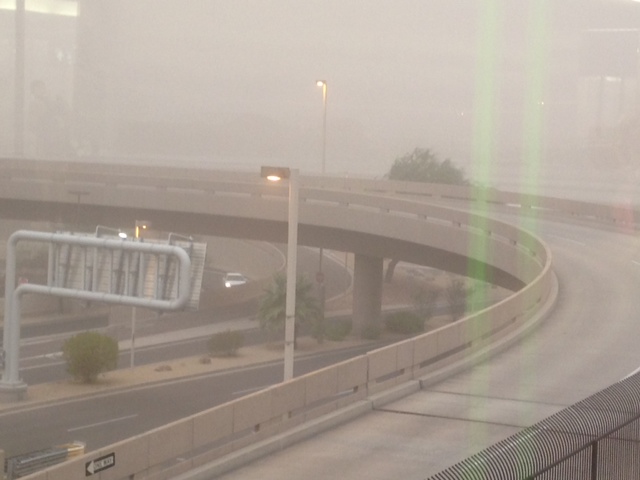 I'm parked on one of those courtesy columns, recharging a phone and trying to reach my friend the Catalyst to see what is his read on the duration of the storm that has stopped flights into and out of Phoenix.  The metronome voice is like a machine gun over my shoulder, while a fellow just around the column is listening to a boomingly loud and dramatically affected Spanish language broadcaster call a Soccer match. He reacts effusively in what can best be described as the odd spawn of a chortle and a nasal guffaw. The parade of humanity marches down the terminal as in tribute to the Zombie apocalypse. Mouths agape, trudging on, watching the dust give way to wind and rain as planes sit in motionless lines at the gates.
The din is a stew of cell phone callers, parents yelling at kids, people bitching about missed connections, PA announcements on delays and gate changes and it all crescendos into a kind of giant moan-though it cannot drown out either the Soccer snorts and profundo or the metronome. And I keep getting, "all circuits are busy please try your call later." At large in America-on a kind of Vonnegutesque mission.  In fact I've been to the temple itself. 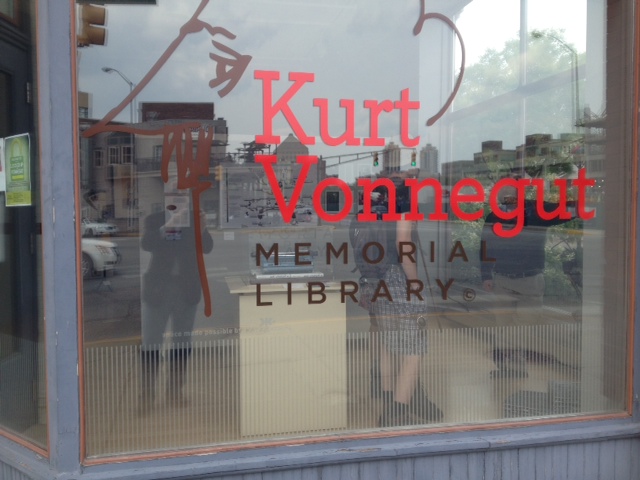 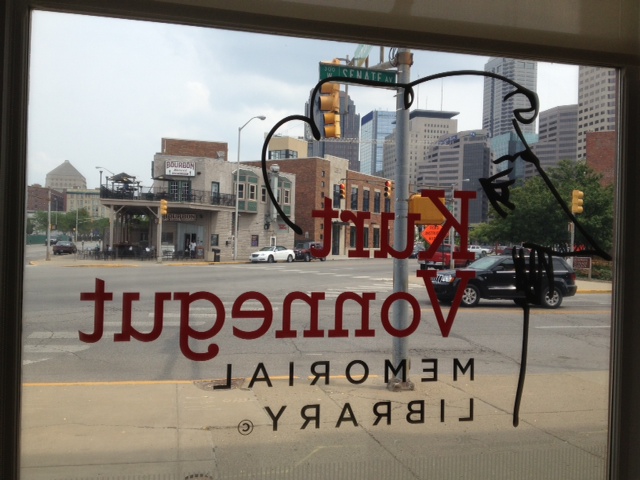 There in the heart of the city where I pounded the street as a reporter, across the street from a bar that often offered cool retreat is the Vonnegut Library.  It is only 25 blocks from where I had my first encounter with the very Kurt himself and just 3 blocks from where the tape of that interviews resides in the environs of the Indiana Historical Society time safe. 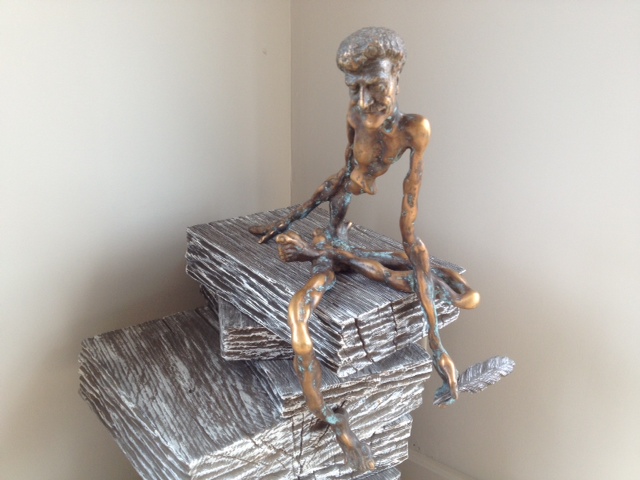 Indianapolis has been enriched by the addition of the Vonnegut Museum and Library. Though the scion of a prominent Indianapolis family may have made some of his family crazy, he was to be embraced by a generation of Indiana readers, and even more world wide. 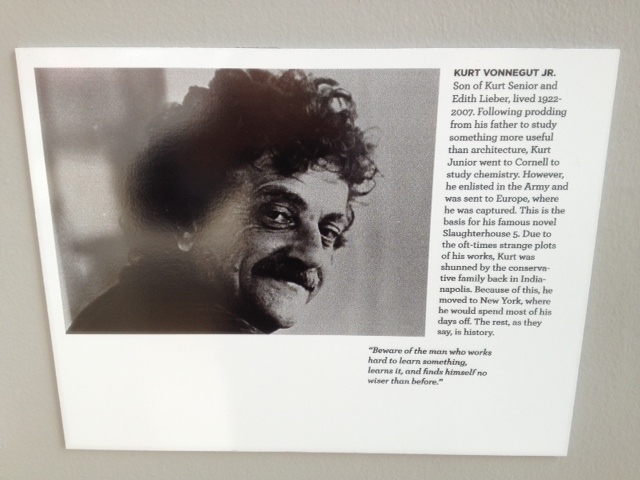 They've created a replica of the room where so many of those thoughts were birthed. 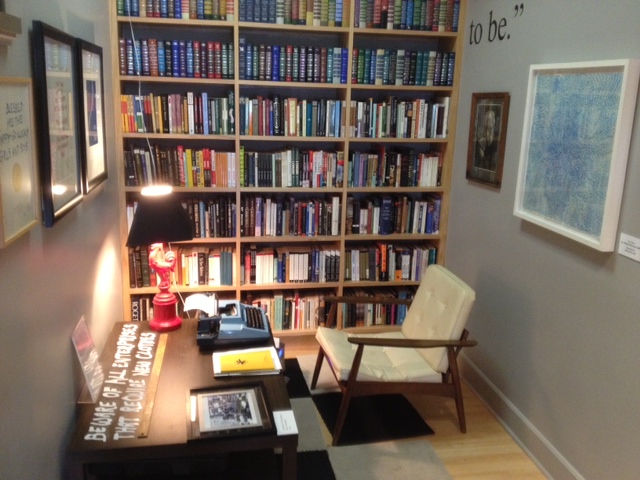 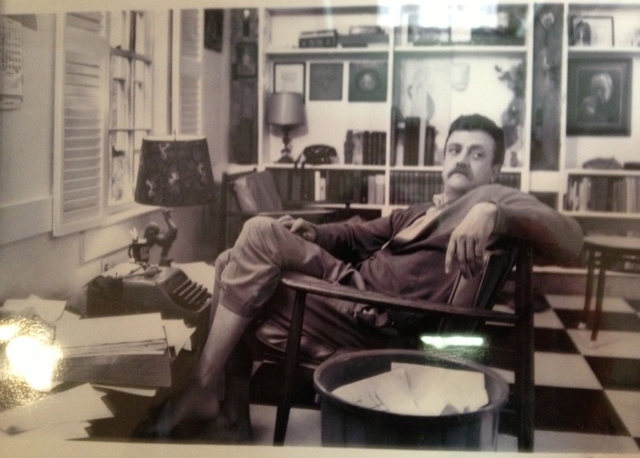 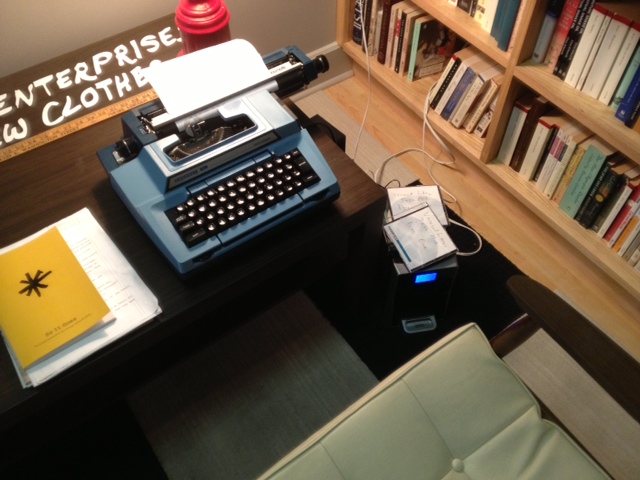 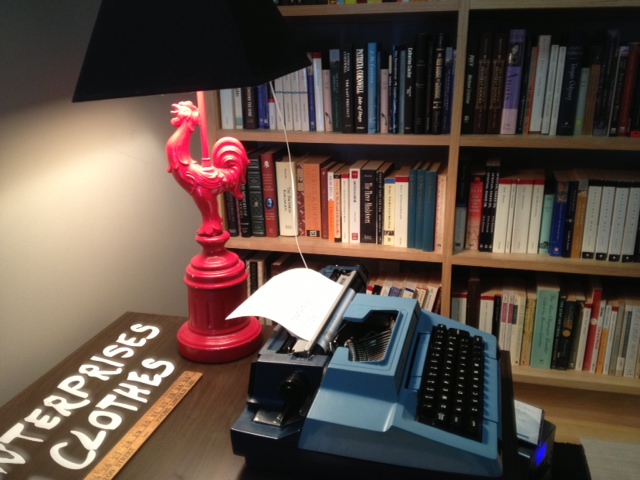 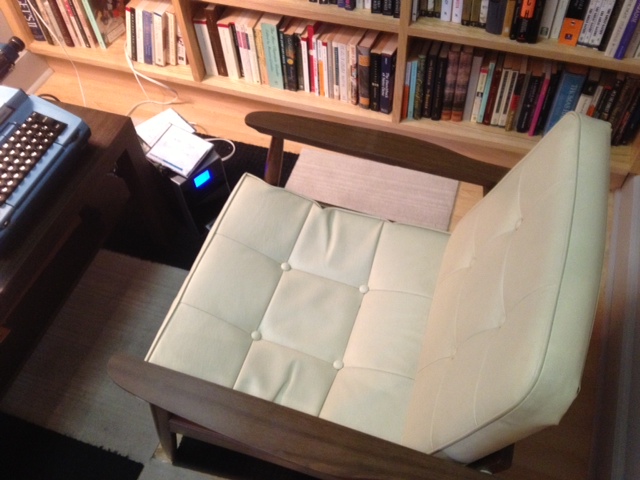 I got a kind of cosmic shock as I noticed all of the representations of an asterisk.  It is a Vonnegut trademark now.  Shock I say, because as a high school and later college student my notebooks were rich with asterisks. The pages full of them, as markers and as doodles. Even then I thought it a bit odd, but they continued to propagate. They riddled my class notes, long before I was reading Vonnegut. 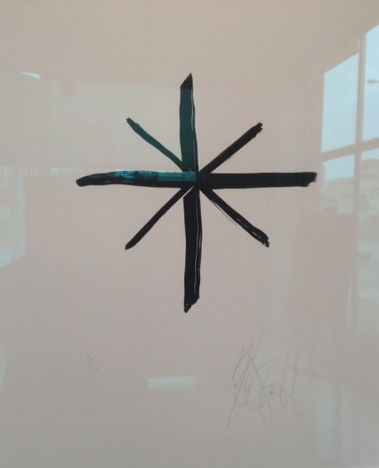 My friend Frank, author of the Vinyl Stats blog, and I have often joked about "Vonnegut moments" ripping into the Hoosier ether.  Must be another one of those, like cosmic lightening. Aside from great interactive data files and videos, Vonnegut books and books about him, there is also terrific Vonnegut art. 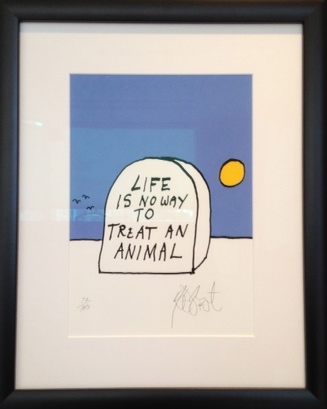 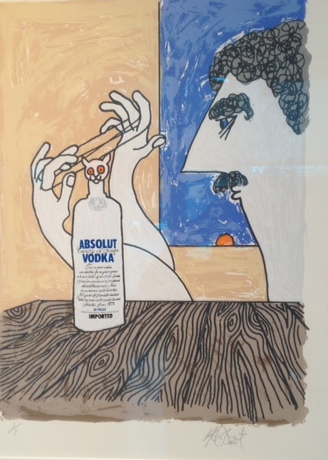 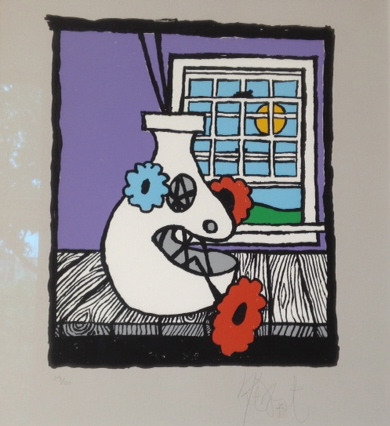 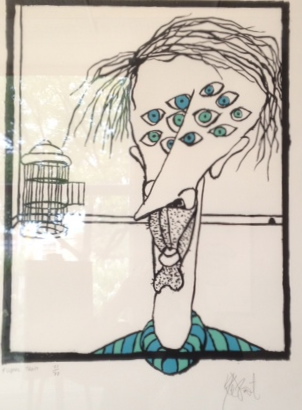 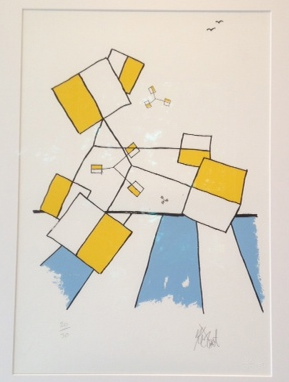 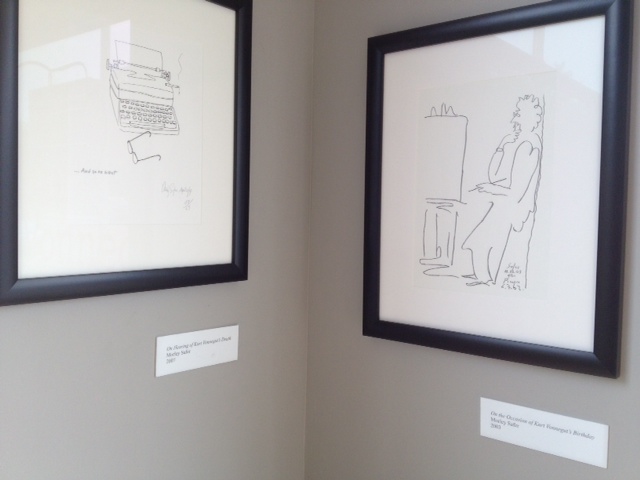 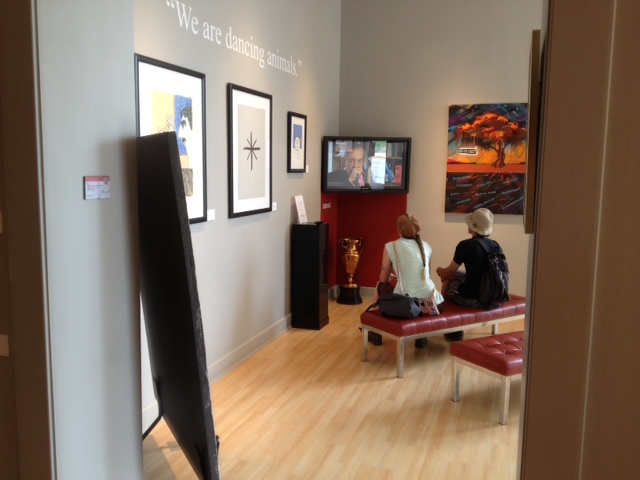 My pilgrimage to the Vonnegut Library was my last stop before heading off for the Indianapolis International Airport after after a weekend pilgrimage of another sort... 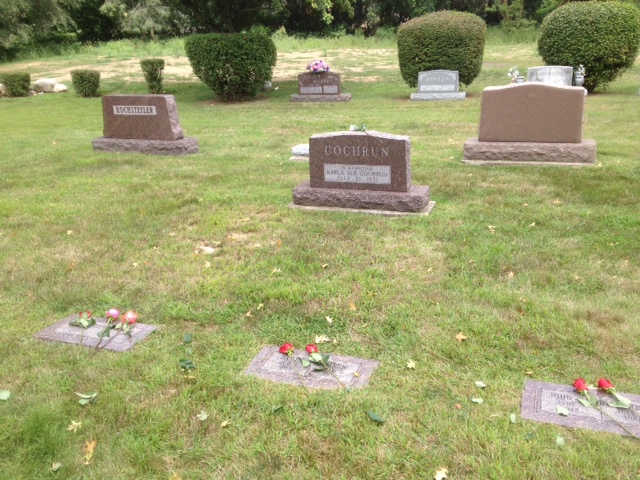 There was also a visit with my famous trophy-I do not have custodial rights... 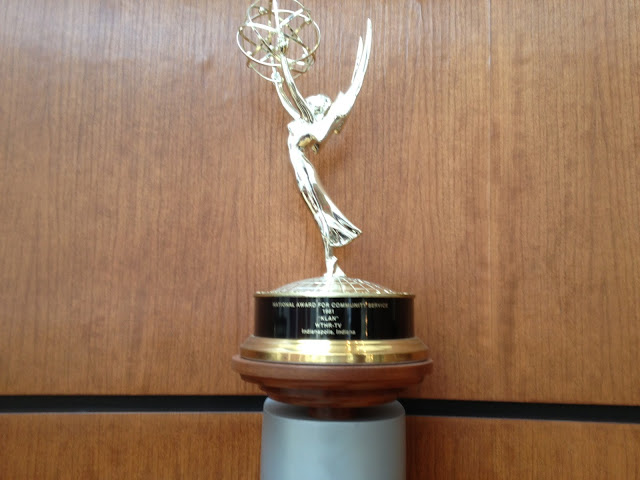 Back in the day I was the first Indianapolis broadcaster to win a national Emmy.  It remains on display at my former employer.  I can stop to touch it however... 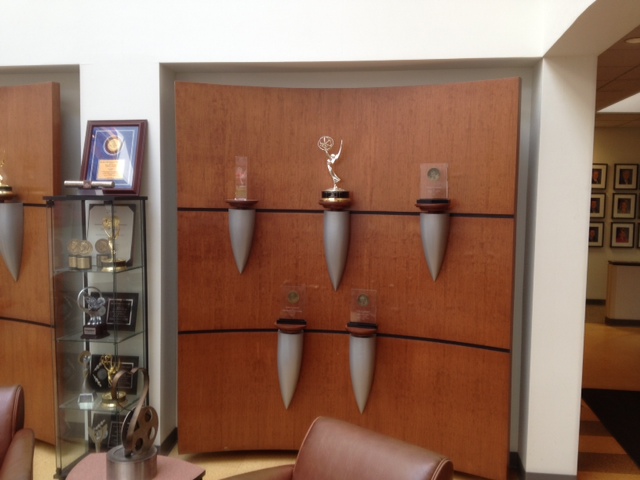 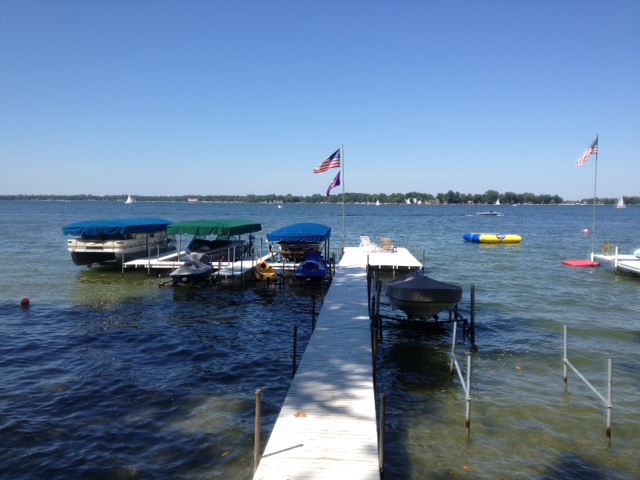 There was also a reunion of fraternity brothers-25 years we have gathered at the end of summer.  Some are gone and now some struggle with health or that of their spouse. But it is a special friendship that deepens with the seasons 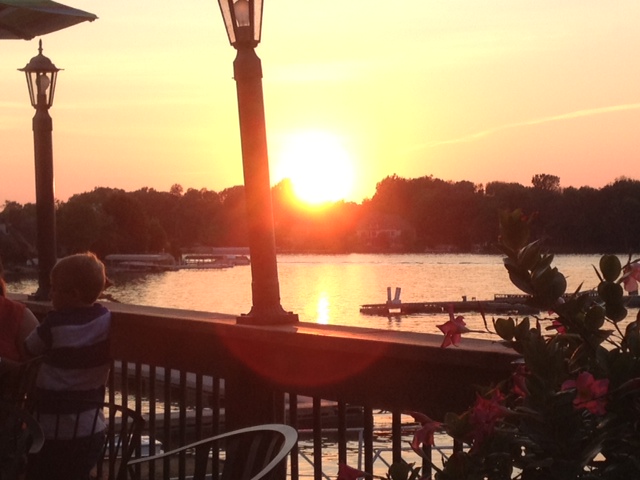 To add another Vonnegut wrinkle to the weekend commemorating the Washington March and Dr. King's address, I met and heard Dr. Allan Boesak.  Boesak was a Mandela and Bishop Tutu ally, one of the leaders of the South African Anti Apartheid movement, often called the South Africa MLK. He more recently left the Reformed Church in protest over their discrimination of gay and lesbian people. I would be flying home to a local iteration of such.
I never did get a clear circuit, the walkway never stopped ending, nor did the metronome voice, but the dust and rain ceased and we were able to ride below the stars and return to this ridge a mile from the Pacific.
And as the man said...."so it goes...."
See you down the trail.
Posted by Tom Cochrun at 2:54 PM