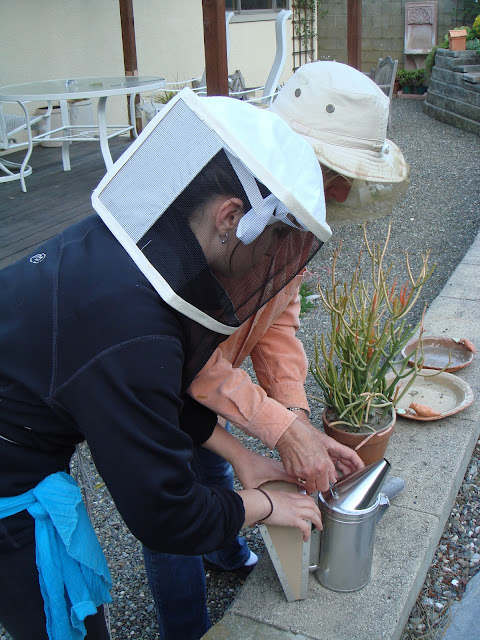 Katherine and her mom, Lana, have become bee keepers.  In 24 hours we added to our household by a thousand or so. 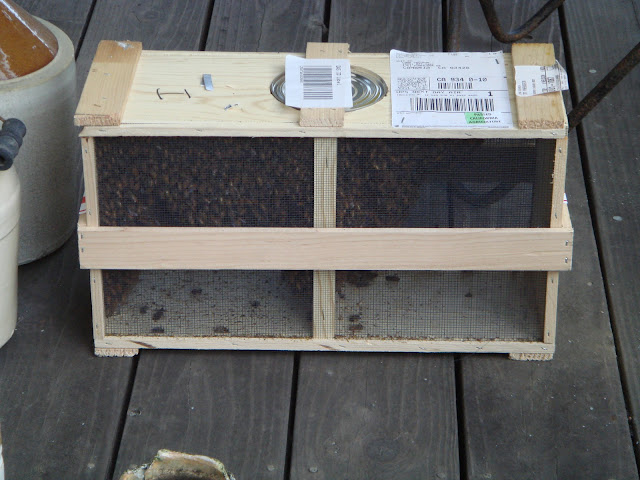 The bees are Italian 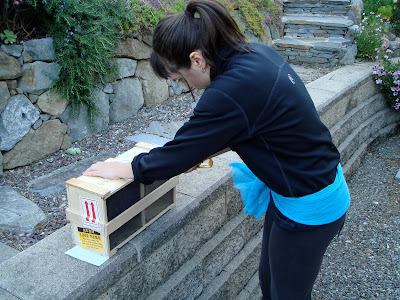 Katherine worked with bees while at the Regenerative Design Institute, near Pt. Reyes and decided the Italian variety would be best for here and our purposes.
They arrived in a box, via UPS and that is a funny little story.  I was working in my study, when I heard the door bell.  I opened the door to find a box. As I picked it up I realized, it was alive and making a noise. I put it down, quickly.
After 24 hours it was time to move them to the hive that Lana and Katherine constructed, but first, there were steps of preparation. 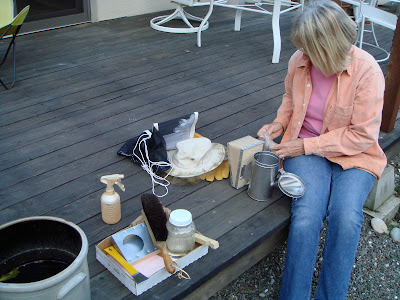 Frames, interior sections of the hive, were put in place.  It is here where the bees will lay eggs, and build combs where they will deposit their honey. 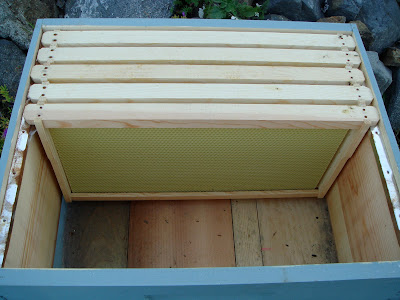 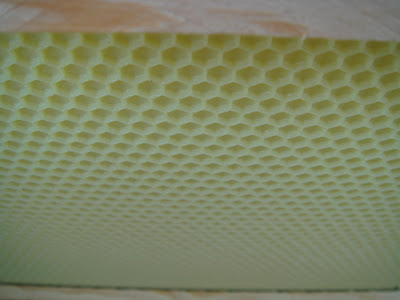 Once the hives were readied, they removed the queen in her chamber, surrounded by attentive "guards." 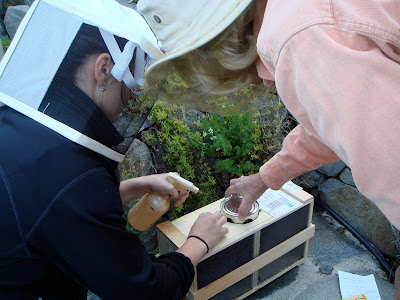 They chose not to wear the suggested protective gloves, because, according to Katherine, the gloves are clumsy making it easier to injure a bee. When that happens
they release pheromones which become a kind of warning signal that can put the other bees into an attack mode. 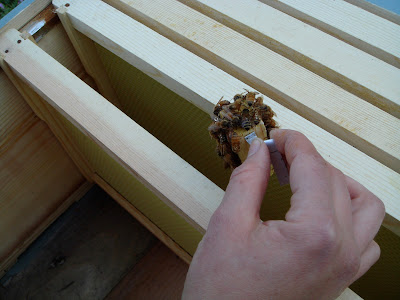 So they handled the queens cluster with great care.  Katherine spoke to them reassuringly. My daughter has become a bee whisperer. 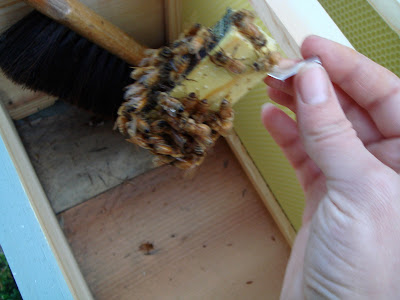 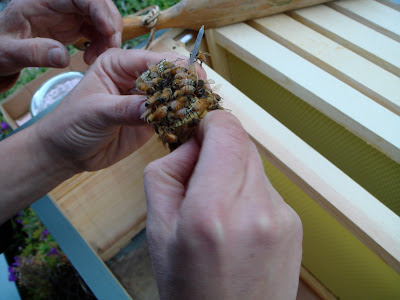 They  removed a plug that had protected the queen from the colony during the move. Then they inserted a sweet, that the colony would chew on as they work to release the queen.  This is all cosmic, natural order stuff.  Apparently during the process of eating the piece of candy, working their way into the queen's chamber, they accomplish a kind of bonding process. 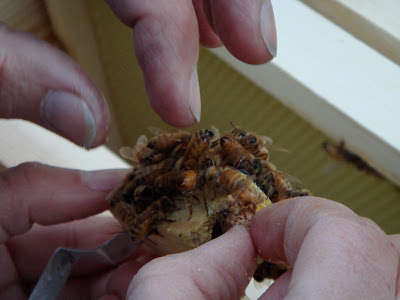 The idea is to allow the queen to get established in a new chamber in the hive, while the "guard" bees and "protectors" set up.  The others, eventually get acquainted with their new hive and then begin to wonder out and do the work of gathering pollen and making honey. As you may know, there is a fascinating bee culture, with very specific roles. Some of the bees simply serve as scouts. 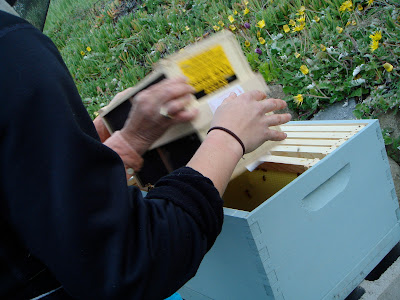 In moving some of the colony, there was a need to use a smoker, which pacifies them. 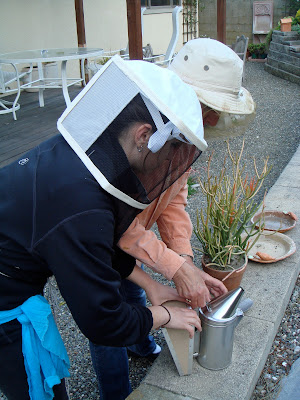 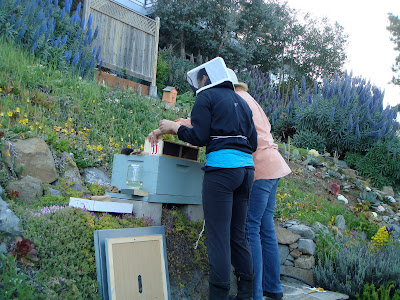 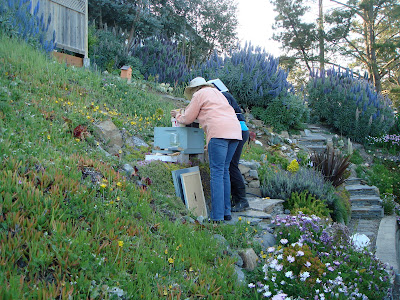 Our colony of Italian bees are ensconced on their new new hill side perch.  Our cats are very dubious.  I wish I could catch a shot of them as they walk below looking up at their new hill mates.  The looks say a great deal.  I've tried to convince them both if they lay quietly near the hive they may hear great Italian arias.  It ain't working.  I am eager for the honey to begin arriving, but Katherine assures that will be a while.
Stay tuned. 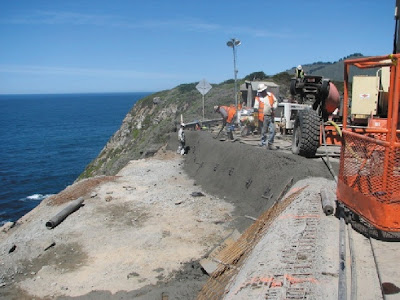 Photo Courtesy of CalTrans
CAMBRIA REPORTER KATHE TANNER HAS THE LATEST ON EFFORTS TO REOPEN HIGHWAY 1. WE CAN NOW GET BACK TO LIME KILN AND BIG SUR. LINK HERE. 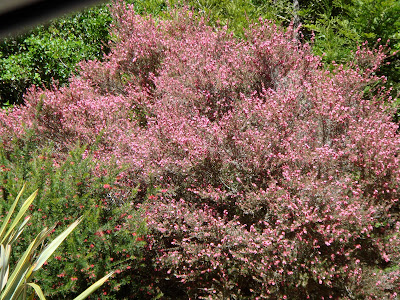 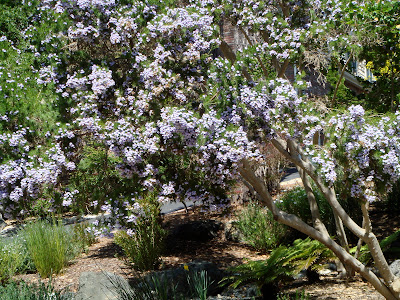 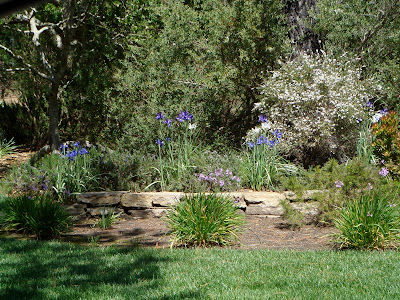 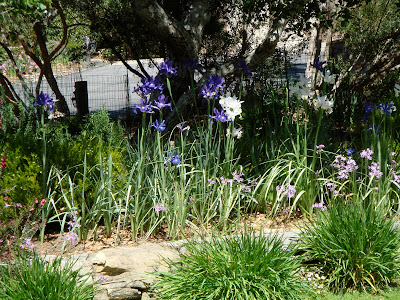 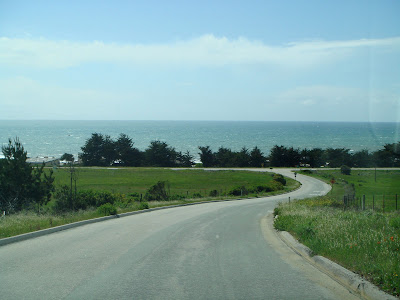 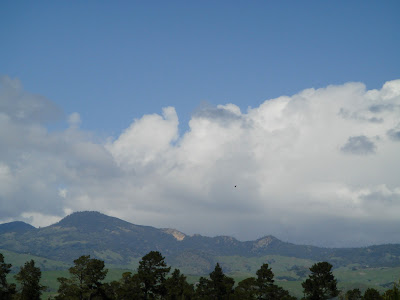 See you down the trail.
Posted by Tom Cochrun at 4:05 PM